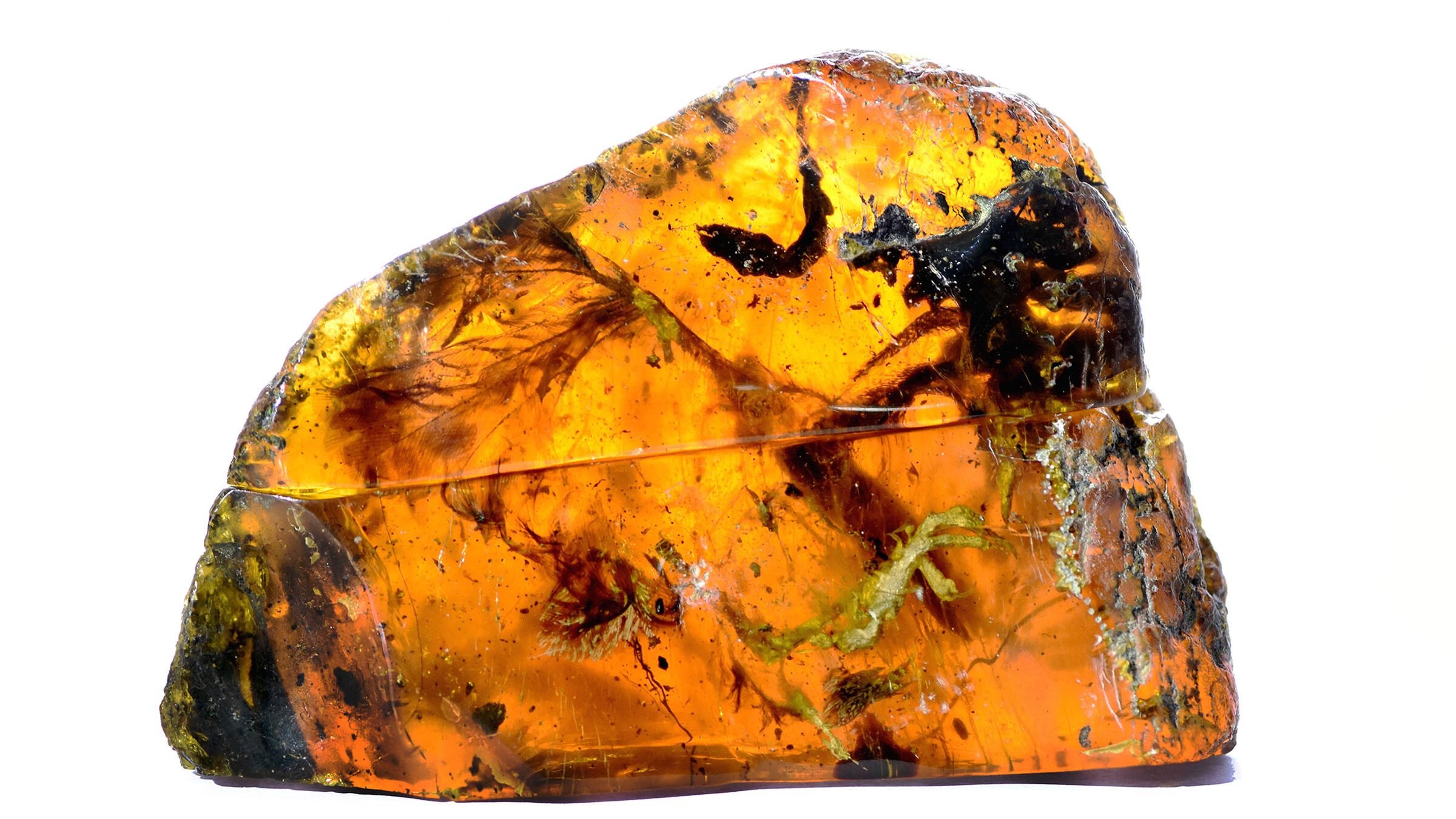 When the amber is lit from behind, the location and size of the bird's individual body parts are much easier to distinguish. Photo: Lida Xing/China University of Geosciences, Beijing

Ninety-nine million years ago, in the tropical conifer forests of Myanmar, a baby bird left the nest for the first time. Disease or floods had stressed the trees, resulting in the release of huge quantities of sap that swallowed everything from insects to dinosaur feathers, before hardening into one of the world’s finest deposits of Cretaceous amber. Somehow, the little bird was swallowed too.

In 2014, a miner working in the Hukawng Valley of northern Myanmar uncovered the amber chunk. All that could be seen within it was a beautifully preserved foot, which the miner thought belonged to some sort of lizard. He brought it to the director of the Hupoge Amber Museum in China, who in turn passed it to paleontologist Lida Xing of China University of Geosciences. Xing was part of a team of researchers studying the Burmese amber deposits, looking for clues to life that once lived in that long-vanished forest. In 2016, they published descriptions of a pair of bird wings and a section of dinosaur tail entombed in sap. Now, Xing identified the foot as belonging to an enantiornithine bird, part of a diverse group of extinct toothed birds from the Mesozoic.

“When we originally set out to work on this specimen, the only features that were clearly visible were the feet and some traces of the feathers coming off of the wing,” says Ryan McKellar, a paleontologist at the Royal Saskatchewan Museum who participated in the study. But as Xing and his colleagues ran CT imaging on the amber, they got a shock. With the micro-CT imaging, they found nearly half of the three-inch body lay hidden within the rock, including the head, neck, feet, and parts of a wing. When the team analyzed the preserved feathers, they uncovered sheets of translucent skin, eyelids, and external ear openings, all protected by the smoky stone. The results of their research, published last week in Gondwana Research, identify the hatchling as the most complete vertebrate fossil yet found in Burmese amber, and a treasure trove of clues about how ancient birds developed from chicks to adults.

The family enantiornithes diverged from modern birds in the Early Cretaceous. Before their extinction at the end of the Mesozoic, they were an an incredibly abundant and successful group, occupying every continent but Antarctica. The vast majority had toothed bills and clawed fingers, along with a characteristic shoulder joint that was the the mirror image of modern birds (hence the English translation of their name: “opposite birds”). The skeletal details of the chick are typical of the family, says Jingmai O’Connor, a coauthor on the study. But the feather assemblage was surprising: Its body was covered in sparse layer of simple brown, gray, and white feathers—possibly a holdover from ancestral theropod dinosaurs—while its wings bore a set of well-developed flight feathers. “This combination does not occur in any living bird,” O’Connor says. “The plumage is really interesting and unexpected.”

The chick seems to have been in the middle of its first molt, McKellar says, marking it as only a few days old. But while it was less downy and adorable than modern fledglings, the flight feathers show that it was also quite a bit more independent, ready to take to the trees within the first few days of hatching. That sort of precociousness suggests that enantiornithine parents might have been less concerned with parental care than today’s birds, which lines up neatly with the abundance of juvenile enantiornithines found in Cretaceous fossils—and likely contributed to the chick’s sticky end.

As impressive as the entombed chick is, O’Connor says, the Myanmar amber deposits likely still have more to offer. “Now that we are aware such specimens exist, numerous teams are scrambling to find and publish similar specimens,” he says. “You can expect even cooler things to be revealed paper by paper, bit by bit.”

The rare, amber-encased fossil, which belonged to a young coelurosaur, tells a new story about feather evolution.

The fossils were discovered in Myanmar amber—a form of mummification that's typical for insects.