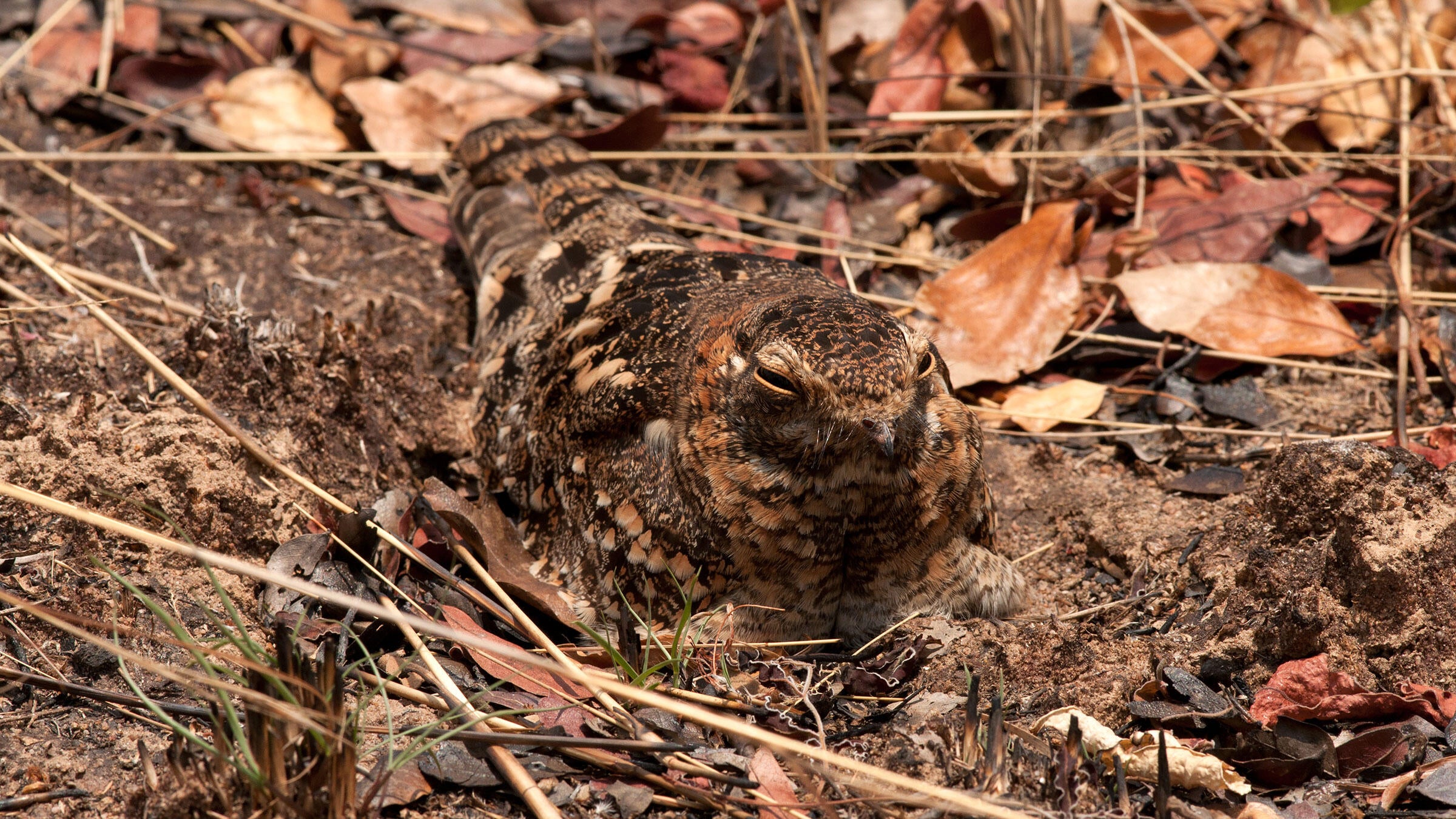 Without the help of local farmers, researchers would have had trouble finding the nesting birds they wanted to study, including this perfectly disguised Pennant-winged Nightjar. Photo: Claire Spottiswoode

Long before armies adopted camouflage to protect troops in the field, animals were using it to stay alive in the wild. Unlike soldiers, though, animals can't choose to change clothes; they have to make do with inherited fur and feathers. Charles Darwin described some of their magnificent guises in On the Origin of Species: “When we see leaf-eating insects green, and bark-feeders mottled-grey; the alpine ptarmigan white in winter, the red-grouse the colour of heather, and the black-grouse that of peaty earth, we must believe that these tints are of service to these birds and insects in preserving them from danger.”

It may take millennia for natural selection to paint species with colors and patterns that help them survive long enough to reproduce, but having these survival tools doesn't matter much if the animals don't use them. So while evolution has slowly touched up the birds' camouflage, they've simultaneously had to develop instincts that took advantage of these concealment traits, according to new research. “Birds seem to be able to influence how camouflaged they appear, not only through gradual evolutionary changes in the appearance of their eggs and plumage, but in behavioral choices about where they lay their eggs,” says Claire Spottiswoode, an evolutionary biologist at the University of Cambridge and the University of Cape Town, and co-author of a study published last month in the journal Nature Ecology and Evolution.

The research focused on nine species in Zambia—three nightjars, three coursers (desert-dwelling waders), and three plovers. The birds nest among leaf litter and on patches of scorched, bare ground during the dry season, and their clutch-survival rates are directly linked to how well they’re camouflaged. For nightjars, it's a parent's feathers that need to blend in, since these homebodies fly off the nest only when predators are so close that protecting the nest is pointless. Coursers and plovers, on the other hand, flush from the nest readily, so it's their eggs that are highly camouflaged. 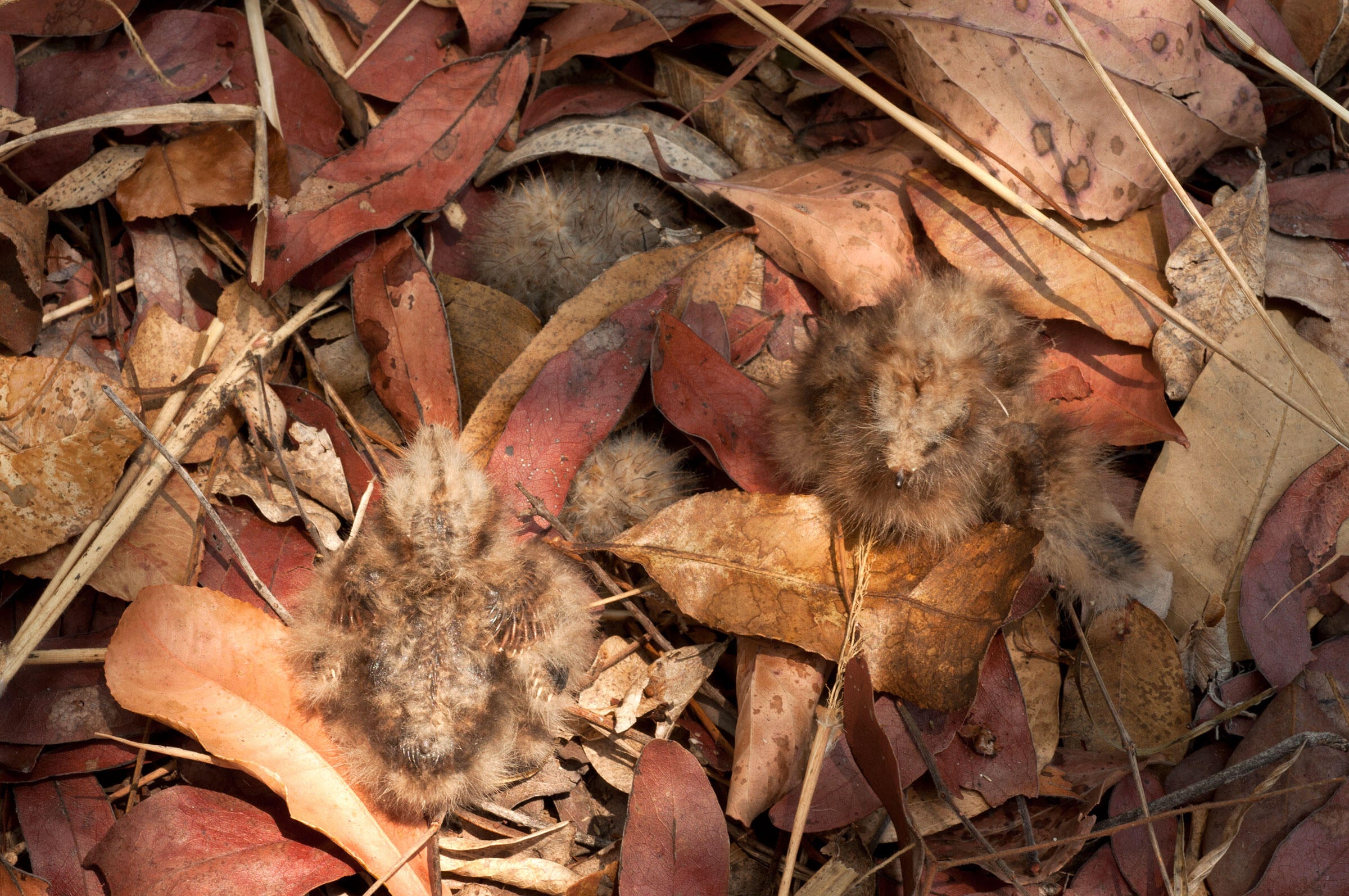 Fiery-necked Nightjar chicks can be hard to spot amid a bed of multi-colored leaves. Photo: Claire Spottiswoode

The first step in the experiment was figuring out how to find such well-disguised nests. For that, the researchers are indebted to Zambian farmers whose local knowledge proved invaluable to the project. “If we had to find them all ourselves,” Spottiswoode says, “we would have spent all our field time finding nests.” She and her team managed to track down and photograph some 200 nests: more than 100 nightjar nests, and over 90 nests for coursers and plovers combined.

“Nightjars are blessedly hard to find,” says Mark Brigham, a biologist at the University of Regina in Canada who was not part of the study but has researched the family for three decades. “I was incredibly envious that these folks were able to find so many nests.”

They snapped photos of eggs from all species and of all adult nightjars; the coursers and plovers flushed too quickly to photograph. To see how well camouflage concealed the birds from would-be nest raiders, the scientists then analyzed the photos with computer models that simulated the range of colors seen by three local predators: mongooses, monkeys, and Gray-headed Bush-Shrikes.

The team found that all nine species consistently chose nesting sites that matched their own camouflage better than other possible spots within a five-meter radius, and also within just a few centimeters. The first suggests the birds can choose the overall habitat or substrate that best suits their unique appearance; the second hints at their ability to pinpoint places at close range where they blend in the best, the researchers report.

“Perhaps most strikingly,” Spottiswoode says, “compared to other individuals of the same species, they’re choosing sites in relation to their own particular camouflage.” That told the scientists that the birds were making nuanced choices based on their personal camouflage, and not just following the same species-level concealment strategy.

The new findings hint that birds may be somewhat aware of their own appearance as well as that of their eggs. Or they might have learned through trial and error, by remembering the backgrounds and habitats where predators managed to find (or not find) their eggs.

“They don’t necessarily have to 'know' what they or their eggs look like in a conscious sense," says study co-author Martin Stevens, an evolutionary ecologist at the University of Exeter. “But one possible mechanism for how they perform this behavior is certainly that they learn about what their eggs look like and over time become better at selecting appropriate backgrounds.”

There’s no reason to think the findings wouldn’t apply to other species around the world, too. Previous studies have found that Japanese Quails nest in sites that best conceal their eggs. But that research was done in a comparatively simple laboratory environment, Spottiswoode says. Past research also shows that moths, lizards, and other animals seek out momentary hiding spots that suit their individual looks. Nesting can have similar life-or-death consequences. “When a bird chooses where to nest, it’s putting all its eggs, literally, in this particular basket,” Spottiswoode says.

Further fieldwork could try to untangle if and how ground-nesting birds—and perhaps other prey animals—understand what they look like and use that information to hide. That is, if anyone can find them.

Audubon is a nonprofit dedicated to saving birds and the places they need. To support our conservation efforts, please make a donation today.