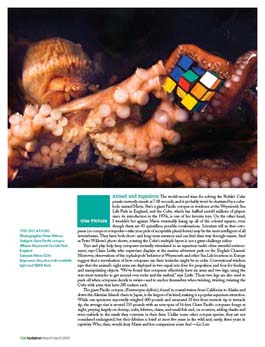 The world-record time for solving the Rubik’s Cube puzzle currently stands at 7.08 seconds, and it probably won’t be shattered by a cubaholic named Mavis. She’s a giant Pacific octopus in residence at the Weymouth Sea Life Park in England, and the Cube, which has baffled untold millions of players since its introduction in the 1970s, is one of her favorite toys. On the other hand, I wouldn’t bet against Mavis eventually lining up all of the colored squares, even though there are 43 quintillion possible combinations. Scientists tell us that octopuses (or octopi or octopodes—take your pick of acceptable plural forms) may be the most intelligent of all invertebrates. They have both short- and long-term memory and can find their way through mazes. And as Peter Willows’s photo shows, rotating the Cube’s multiple layers is not a great challenge either.

Toys and play help keep octopuses mentally stimulated in an aquarium tank’s often stressful environment, says Claire Little, who supervises displays at the marine adventure park on the English Channel. Moreover, observations of the cephalopods’ behavior at Weymouth and other Sea Life locations in Europe suggest that a reevaluation of how octopuses use their tentacles might be in order. Conventional wisdom says that the animal’s eight arms are deployed in two equal sets: four for propulsion and four for feeding and manipulating objects. “We’ve found that octopuses effectively have six arms and two legs, using the rear-most tentacles to get around over rocks and the seabed,” says Little. Those two legs are also used to push off when octopuses decide to swim—and to anchor themselves when twisting, twisting, twisting the Cube with arms that have 280 suckers each.

The giant Pacific octopus (Enteroctopus dofleini), found in coastal waters from California to Alaska and down the Aleutian Islands chain to Japan, is the largest of its kind, making it a popular aquarium attraction. While one specimen reportedly weighed 600 pounds and measured 30 feet from tentacle tip to tentacle tip, the average size is around 110 pounds with an arm-span of 16 feet. Giant Pacific octopuses forage at night, preying largely on shrimp, crabs, lobsters, clams, and small fish and, on occasion, adding sharks and even seabirds to the meals they consume in their dens. Unlike some other octopus species, they are not considered endangered, but their lifetime is brief: at most five years in the wild and, rarely, three years in captivity. Who, then, would deny Mavis and her companions some fun?—Les Line, Audubon