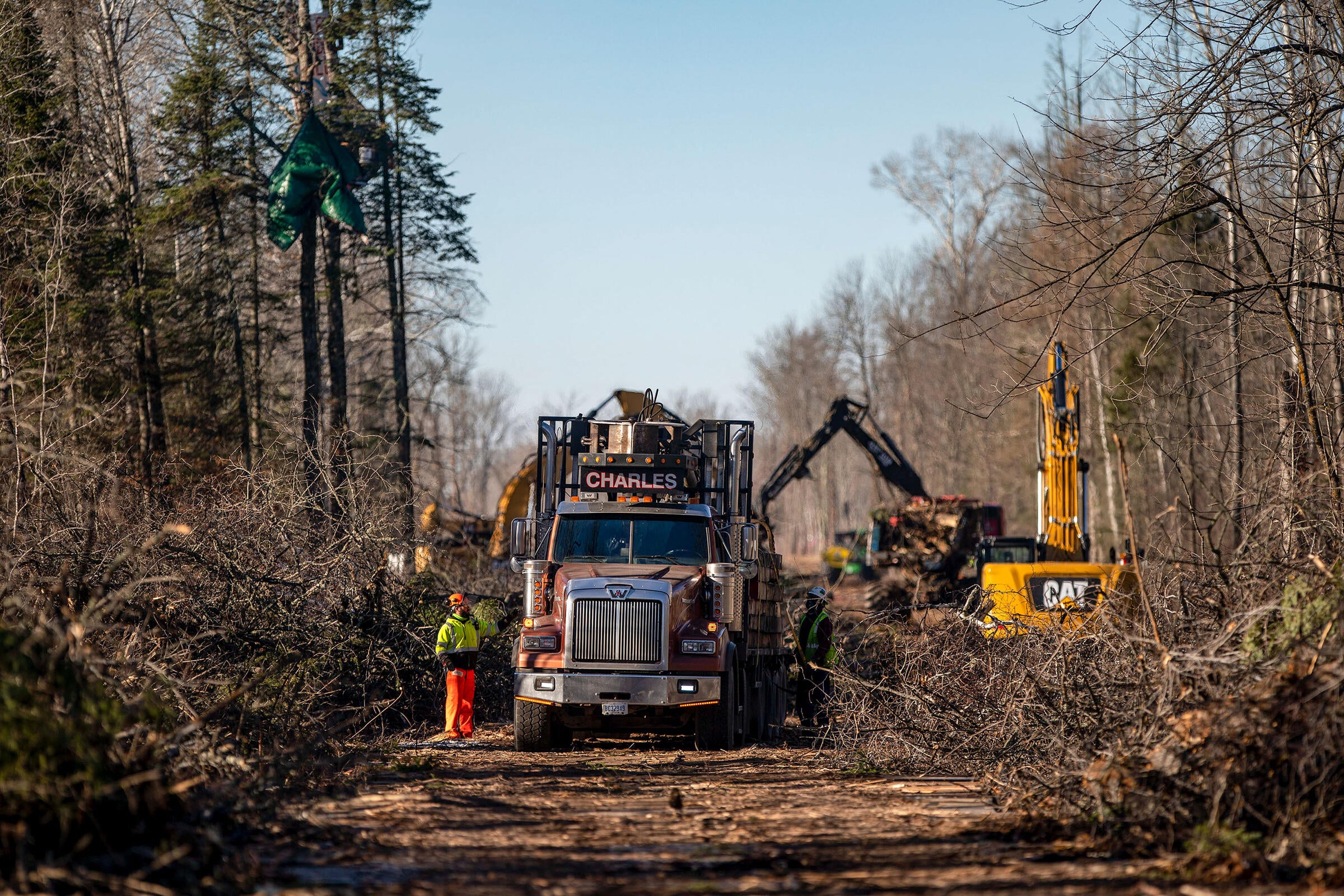 Two activists camp in the tops of trees as contractors work on clearing a strip of land on the Line 3 work site in Aitkin County, Minnesota, December 2020. Photo: Alex Kormann/Star Tribune/AP

Environmental and Indigenous critics of the pipeline have spent years opposing Enbridge's Line 3. They aren't giving up now.

One of the tools used to clear-cut forests is called a feller buncher. Imagine an excavator or small crane, but with large, metal claws at the end. The claws grip trees by their trunk, slice through their base, and ease everything but a stump to the ground before moving onto their next target.

Waabigonikwe Raven watched this process repeat through five miles of forest in northern Minnesota earlier this month. For her, it was a disturbing sight. “It feels like you’re in some kind of apocalypse movie,” she says. “It’s really hard to watch.”

But for Raven, as well as many other environmentalists and Native people, the reason for the clear-cutting was even worse than the act itself. The forest was razed to create a path for the new Line 3 oil pipeline, a nearly $3 billion Enbridge Energy project to replace the previous Line 3 pipeline, which will carry tar sands oil from Alberta, Canada, to U.S. refineries. After a years-long regulatory process, Enbridge received its final permits in late November and began construction early this month.

Critics have long opposed the pipeline because of its contribution to climate change and the more immediate environmental risks it poses. In Minnesota, more than 200 bodies of water and nearly 80 miles of wetlands sit along the 330-mile route where Line 3 will carry a daily load of 760,000 barrels of crude oil. If spilled, the sinking, toxic sludge could be a disaster for wildlife and humans alike. The wetlands the pipeline crosses are thriving habitats for native and migratory birds, as well as a diverse array of other species. For local Native communities, the pipeline threatens ancestral lands and a critical modern lifeway: wild rice beds. It also violates treaty rights, they argue.

Environmentalists don’t need to look back far to find an example of the disasters that can happen with such projects. In 2010, an Enbridge pipeline in Michigan spilled more than 1.2 million gallons of tar sands crude oil into the Kalamazoo River. Nearly 4,000 birds and other wildlife—including Canada Geese, Great Blue Herons, and hundreds of turtles—required care from issues relating to the oil. More than 150 animals died, according to the U.S. Fish and Wildlife Service.

Line 3 opponents haven't forgotten that day, and say the lesson is clear: Pipelines spill, and we need to stop using them, not build more. Despite Enbridge having the legal go-ahead to start building, people like Raven say they’ll remain on the frontlines to try to stop construction and keep watch on the land. That’s why she and dozens of others have braved the cold to witness Enbridge’s work, which has included clearing the forest, making road approaches, and stringing pipe. Some activists are also putting their bodies into the fight, standing in the way of Enbridge’s machinery and, in at least one case, tying themselves to the very trees workers were trying to fell.

“Even though we're focusing right now on the construction in Minnesota,” Raven says, “the line will be put underneath very crucial wetlands, including the Mississippi River that flows all the way south and will affect people that live down there too.”

The environmental harm from the project and others like it begins even farther to the north, where tar sands oil companies in Alberta are tearing down forests en masse and creating poisonous tailings ponds so big they’re visible from space. These tailings ponds—pools of wastewater and other tar sands mining byproducts—are a death trap for birds that land in them. They can leak into nearby rivers and groundwater sources, too.

After the Kalamazoo River spill, a woman who lived nearby, Deb Miller, told CBC News that Enbridge did the bare minimum required by law when cleaning up the accident and addressing its fallout. She said many of her neighbors moved from the area to escape the spill’s aftermath.

“Enbridge does what they have to do and only that,” she told the Canadian broadcaster. “When it affects people, residents—there's a high road and there's a low road. And unfortunately, I think [Enbridge] found that low road.”

Earlier this month, 22-year-old Liam DelMain climbed up a tree that stood in the way of Enbridge’s feller bunchers. Their plan was to stay there for as long as it took to stop the machines.

“Line 3 is a threat to the waters I hold dear, and that we all rely on,” said DelMain, who uses they/their pronouns, in a statement released at the time by Giniw Collective, an organization fighting the pipeline that’s led by Indigenous women. “I am here, putting my body on the line, because I have been left with no other choices.”

The tree DelMain called home for 10 days before their arrest is part of a young forest. Like much of the country, generations of logging decimated Minnesota’s forests. Today, the forests are younger and more fragile than the ones before industry laid claim. “These trees haven’t even had a chance to live a full life,” says Raven, who’s a member of the Lac Courte Oreilles Band of Ojibwe. “They're not just trees—they're also homes for birds and squirrels and other species.”

Clear-cutting tracts of forest to make way for the pipeline could force birds and other animals elsewhere, but that’s not the only habitat at risk with Line 3. Where the pipeline doesn’t cut through forest, it will often cross water. “Throw a stick [in Minnesota] and you’re gonna hit a lake,” says Tara Houska, a long-time environmental activist and founder of Giniw Collective. 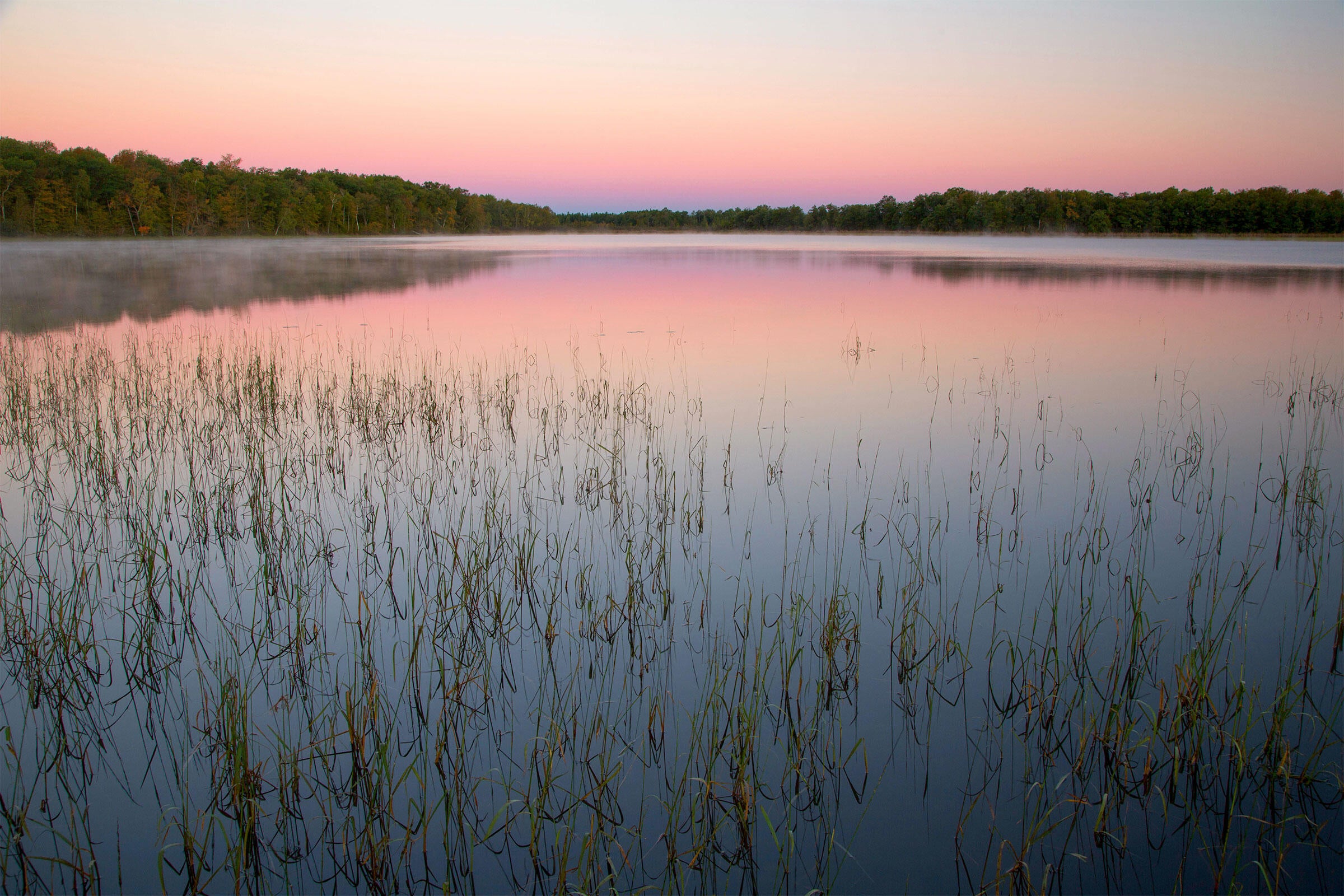 Among the many bodies of water the new Line 3 route crosses are beds for wild rice—a sacred and critical grain for Native people in the region. Protecting wild rice waters has been a major sticking point for pipeline opponents, who argue that simply installing the pipe damages wild rice habitat and that any spill would be catastrophic.

“That's the economy of the people that have been here since before Minnesota [was a state],” Houska says. “That’s on top of an ongoing history of violations of treaty rights.”

Protecting wild rice waters has been a major sticking point for pipeline opponents.

In the middle of the 19th century, the Ojibwe people in present-day Minnesota saw their fur trade fall apart, taking a major part of the tribe’s livelihood with it. The Ojibwe became increasingly reliant on payments from the government, which led to an 1855 treaty between the U.S. government and the tribe. The Ojibwe people ceded much of their remaining land in the territory in exchange for the creation of Leech Lake and Mille Lacs reservations, as well as the promise of continuing payments from the federal government.

While there have been numerous disputes over the treaty’s exact meaning, tribal members argue that they still have rights to hunt, fish, and gather—including harvesting wild rice—on the ceded lands. There’s no specific clause in the 1855 treaty granting those rights, but tribal legal experts say the context in which the document was signed makes clear that the drafters intended that Native people have hunting and fishing rights.

Line 3’s new route skirts around the reservations, but opponents say that running the pipeline through disputed territory imperils Native peoples’ ability to use the lands their ancestors had for generations.

However, Gov. Tim Walz, to the ire of environmental and tribal groups, has allowed the pipeline to move forward despite protest from people as high-ranking as his second in command: Minnesota’s lieutenant governor, Peggy Flanagan, who’s a member of the White Earth Band of Ojibwe and has long opposed Line 3.

“To me, this is a huge blow to any semblance of attempting to demonstrate progressive leadership,” Houska says.

“If Washington won't lead on it, Minnesota will. Minnesota's future is in the green economy,” he tweeted.

In the two years since, Walz has been under pressure from all sides—climate and conservation activists, Native organizations, and labor unions that want the pipeline built. He saw nearly all members of the Minnesota Pollution Control Agency’s environmental justice advisory group resign over the Line 3 approval, calling it “a war on Black and brown people.” His own government determined that the social cost of carbon from Line 3 would reach over $280 billion by 2050.

While his administration has tried to fight Line 3 at certain points over the past years, Walz ultimately let the regulatory process play out. That wasn’t enough for pipeline opponents, who say the governor hasn’t kept his promises.

“Walz has said that he would do things in favor of Indigenous people and he's clearly not following up with that,” Raven says. “He must not be watching the same thing that we're watching, like seeing trees being clear cut and their roots being dug up and destroyed.”

Line 3 opponents look with envy across the Great Lakes to Michigan, where Gov. Gretchen Whitmer in November forced Enbridge to close its Line 5 oil pipeline over environmental and climate concerns. “That was extremely powerful to see somebody say no, for once,” Houska says. “But that just didn't happen in Minnesota.”

While Minnesota’s approval of Line 3 is a loss for advocates, Houska says she was reminded about how important direct action and demonstration are after seeing the public shift following the killing of George Floyd by Minneapolis police last summer. “You got millions of people marching in the streets, and all of a sudden the conversation on police and police brutality has tipped forward ahead to abolishing the police outright,” she says.

For the climate, environmental, and Indigeneous justice movements, Houska says it will be critical to continue with both policy efforts and front-line activism—the kind that puts people in the way of clear-cutting machinery in the middle of the Minnesota northwoods. Activists are not backing down: Just last week, 22 people protesting Line 3 were arrested for trespassing and unlawful assembly near the town of Palisade. “We have to be willing to be uncomfortable to get something done,” Houska says.