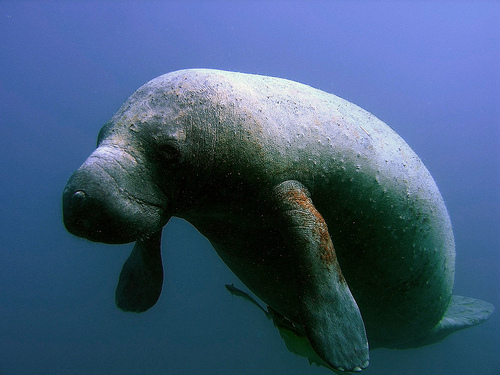 In southwest Florida, more than 200 manatees have died—up more than 30 percent from the highest ever yearly count of 151. The cause? Devastating algal bloom. Although the bloom’s seasonal, some say it’s not all par for the course. Manatees—endearing, lumpy elephants of the sea—may in fact be the meter showing that harmful algal blooms are on the rise.

Because algal blooms have historically happened without human influence, it’s hard to figure out whether we’re playing a part. They occur naturally when the right conditions combine to send dinoflagellates—tiny organisms that live in aquatic ecosystems—mushrooming through the water, staining it brown, green, or red like an industrial dye. Mostly, they’re safe, offering when they’re confined a necessary food source that forms the basis of a food web on which most marine organisms depend. But this most recent proliferation—called a ‘red tide,’ and bearer of the deceptively gentle-sounding organism, Karenia brevis—is more of a runaway.

For manatees, red tide represents the shock of suffocation: The algae can coat waters and deprive organisms below of their oxygen, but it can also act more directly as a neurotoxin hindering manatees from rising to the surface to breathe. Those that have died this year in southwest Florida have actually drowned. “[The red tide has] kind of filled in an area where [the manatees have] congregated and are feeding on seagrass where the toxins settle,” Kevin Baxter of the Florida Fish and Wildlife Conservation Commission told CNN.

The creatures around the United States and Florida’s coasts face the triple threat of injury by watercraft, loss of warm-water habitats where they survive in the cold, and destruction of seagrass they depend on for food. They’re categorized as ‘vulnerable’ on the IUCN Red List: Manatee numbers in the U.S. sit between 2,000 and 5,000, making a loss of 200 at once a great concern.

In the face of these devastating numbers, there’s debate about whether red tide is actually increasing or whether it’s simply a perspective shift. Some people say, for example, that the perceived rise in red tide events comes from greater awareness and monitoring. Others, like NOAA’s Rob Magnien, say an actual change has occurred.  “Most people believe it’s not just the ability to detect [harmful blooms],” Magnien, chairman of a United Nations panel on harmful algal blooms, told E&E News Service. “There are true increases in frequency and severity of blooms.”

Possible culprits include microbe-bearing ships or increased runoff of nutrient-rich ingredients like fertilizer and sewage into the sea. Climate change may also be a contributing factor. Scientists suspect that agricultural practices specifically are the primary cause. “We’re flooding the ocean with fertilizer,” said William Sunda, a phytoplankton ecologist with NOAA, to E&E News Service. Fertilizer runoff leaches phosphorus and nitrogen that gives dinoflagellates a dangerous nutrient boost.

Algal outbreaks are difficult to predict or manage. How can we even hope to prevent further manatee decline? Frequent water sampling and analysis may arm scientists with better predictive tools, E&E News suggests. Satellite surveys of the ocean could help, too. Right now, these methods are more useful for warning people away from the coast, where airborne algae can aggravate asthma, or make swimmers sick if they ingest it in the water. But saving manatees is another thing.

The Florida Fish and Wildlife Service has a manatee hotline for anyone who spots animals looking disoriented or twitchy, or those that seem out of breath. “If someone sees a manatee acting in this manner, they can call us and we will come and rescue it,” Baxter told AccuWeather. So far, the service has helped 12. Meanwhile, the plot thickens on Florida’s eastern seaboard, where unprecedented numbers of manatees are dying as well. There, however, the cause is still unknown.