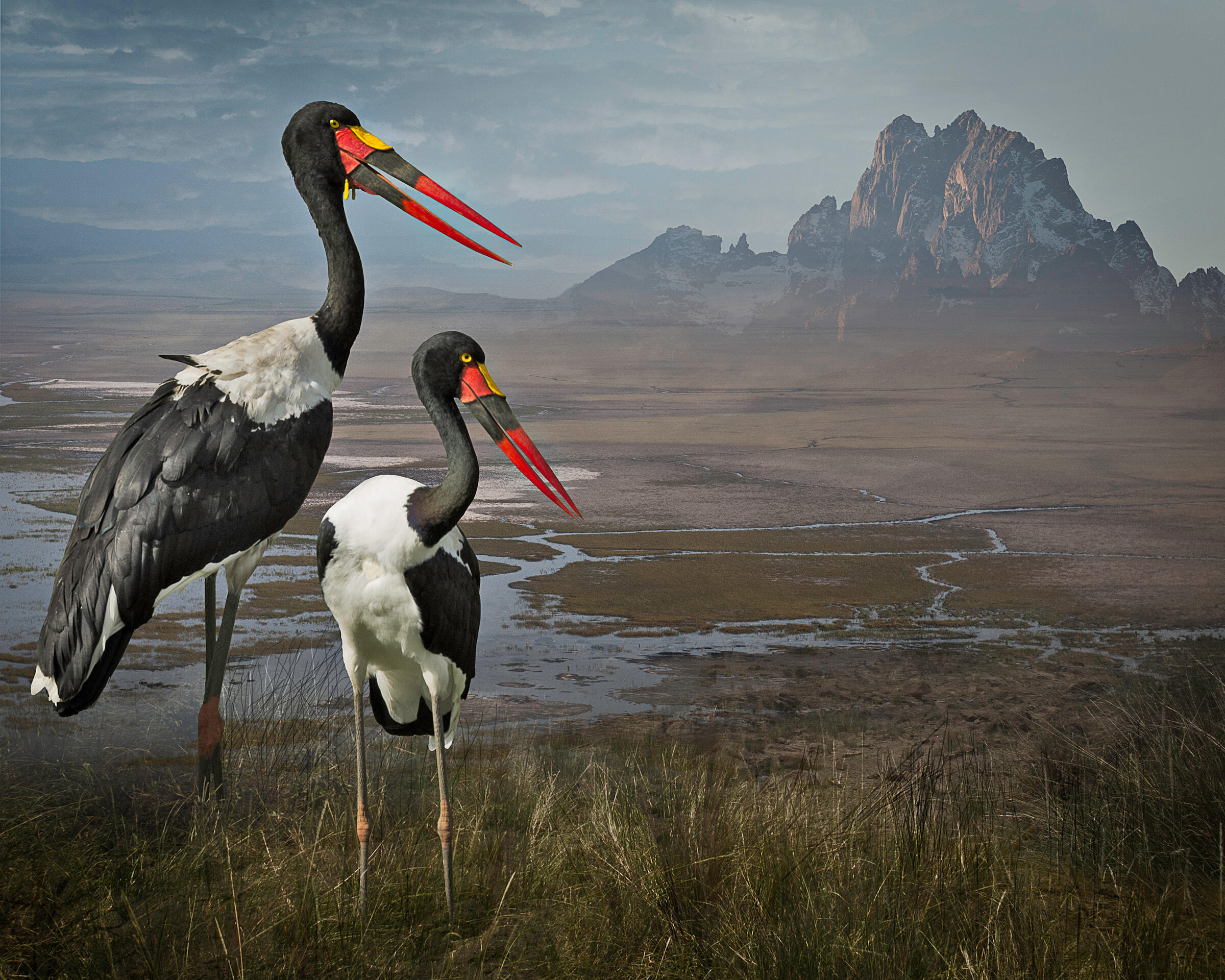 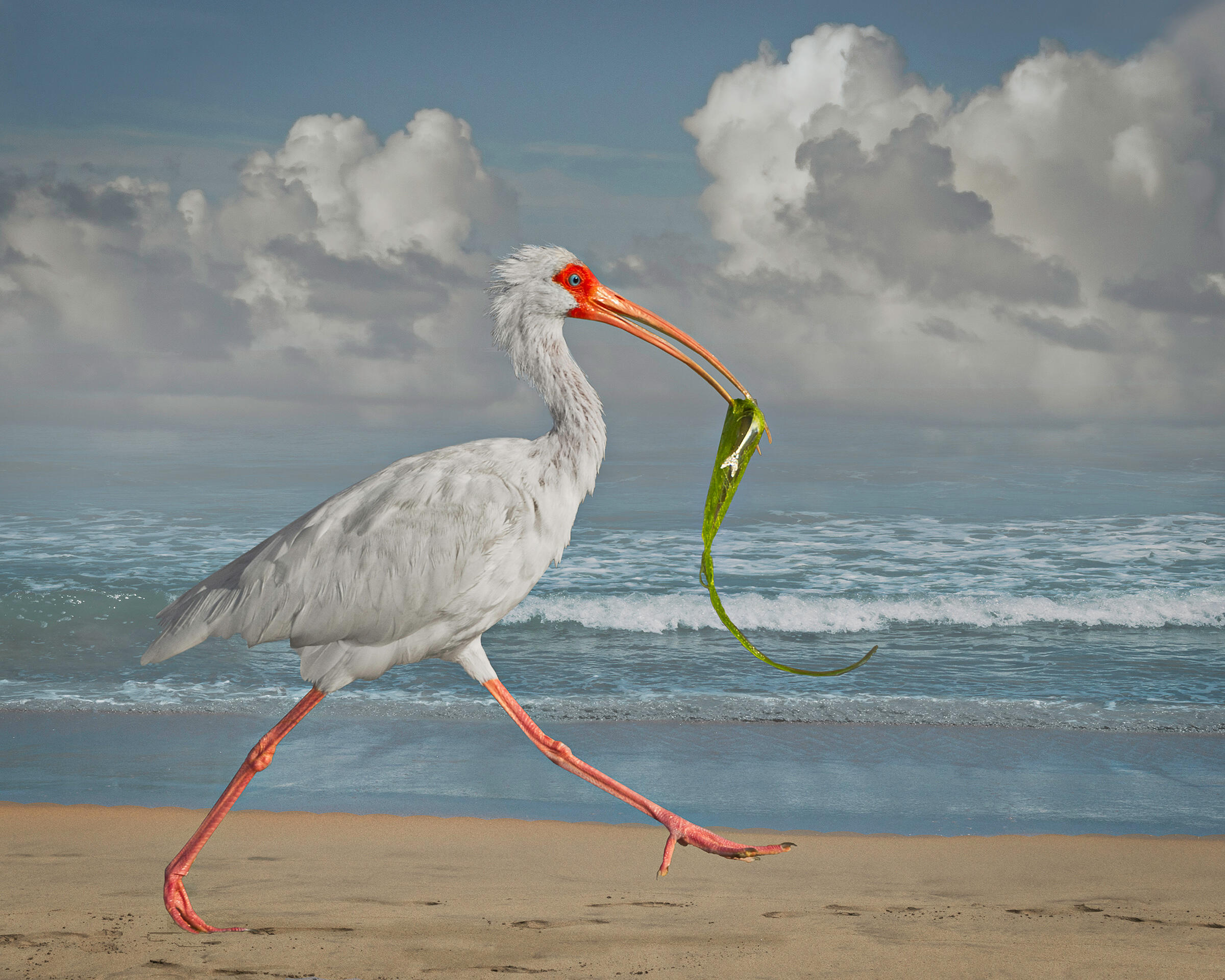 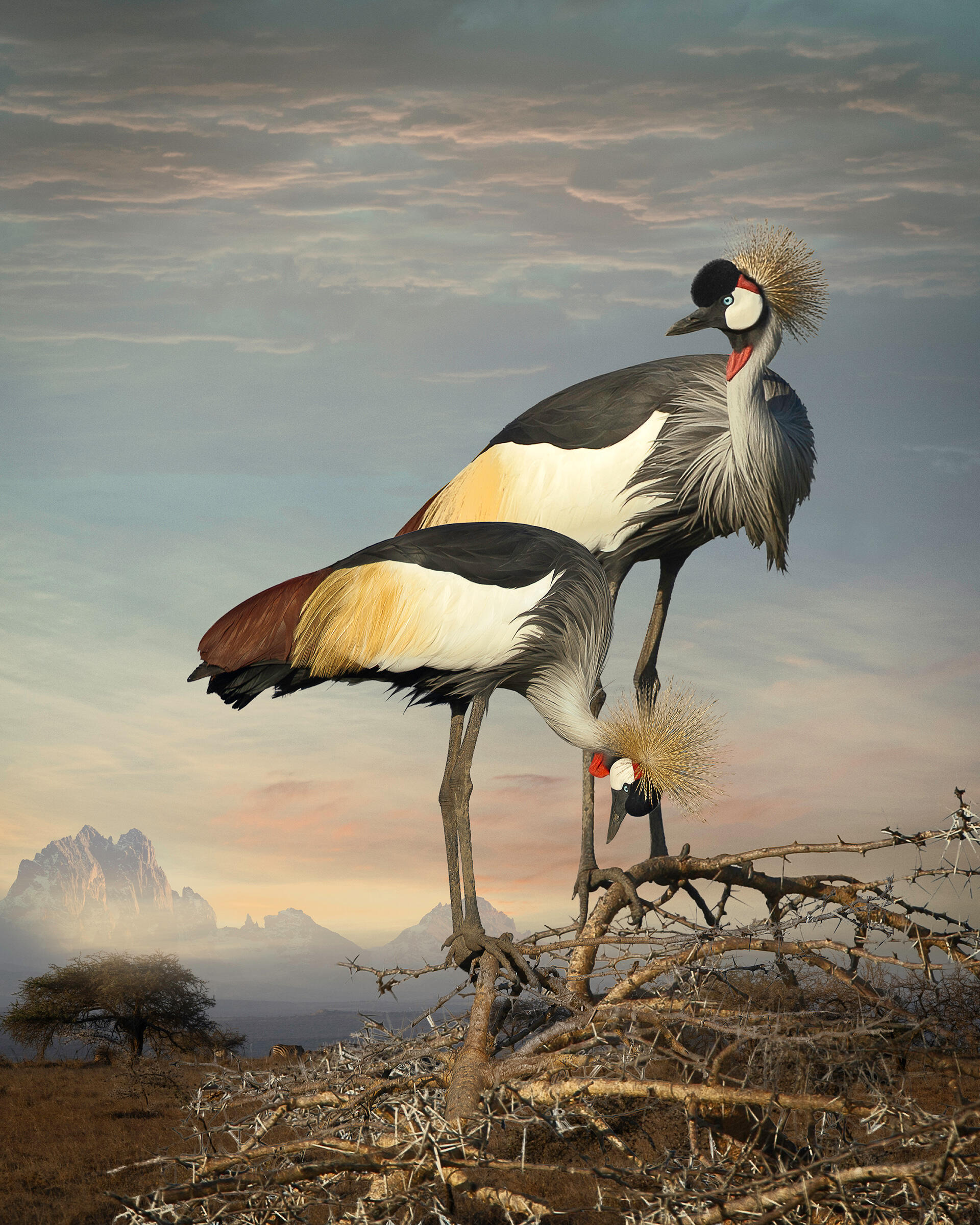 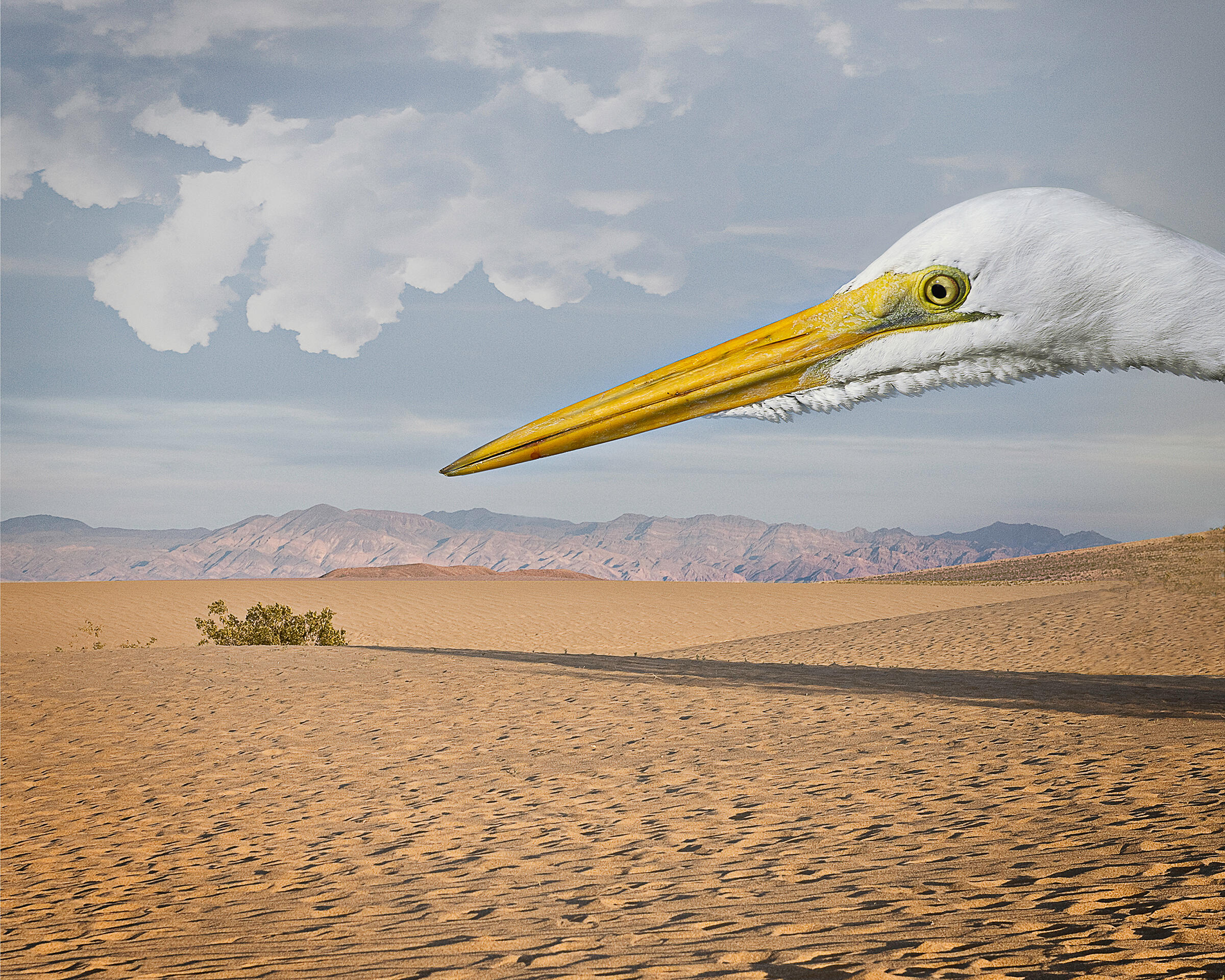 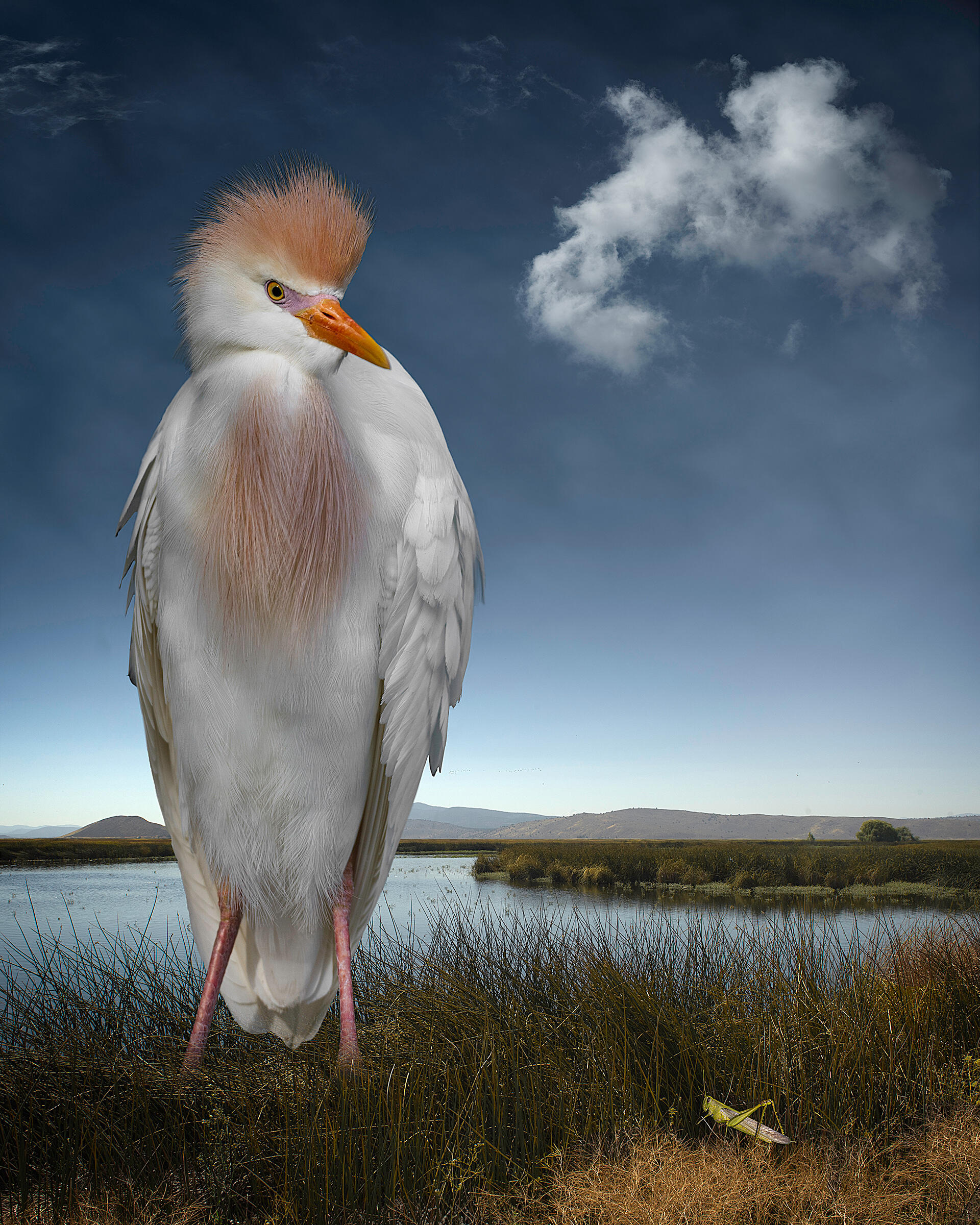 Wildlife photography lovers may feel misled by Cheryl Medow’s images of birds—but this is a sentiment she encourages. Medow wants viewers to be slightly confused, to look twice, and to decide if what they see is real.

All of the images by the Santa Monica, California-based fine art photographer employ genuine bird portraits (predominantly those of long and lean aquatic species), but each is fixed in the artificial realm as well. Like eye shadow makes the iris pop, Medow cuts, layers, and assembles her photos to show off a bird’s undertones. Unaltered “purist photos” are more authentic, she says, but her method captures a creature’s essence. “I want to make birds grandiose, to give proper recognition to their importance in our lives.”

Though she loves birds’ natural traits—particularly mating plumages in spring—Medow can’t help but meddle. While photographing the Cattle Egret’s lore—the bare skin under their eyes, which changes color in breeding season—she learned more about their foraging behavior. Unlike the typical heron diet of fish, Cattle Egrets pursue insects, she realized. Promptly, Medow Photoshopped a large grasshopper at the base of her piece, “Cattle Egret and the Grasshopper,” which is now part of the photographer’s ongoing series: Envisioning Habitat. “It just felt very intuitive,” she says. Medow entered several of the series’ shots into the "Fine Art" category of this year's Audubon Photography Awards, and was recently a finalist in the 2015 LensCulture Earth Awards.

A second “envisioned habitat” features mother and baby Saddle-billed Storks, boasting brightly hot colors on their beaks. They were standing across a river when their picture was taken, she says. Later the duo was placed against the backdrop of Mount Kenya, which is part of the species' range, but certainly was not visible on the day of the shoot. From this modification, she says, stems a more complete picture of the storks’ life and environment.

On first glance, Medow's surreal wildlife photography might be puzzling. But take a second look, and you'll find that it's easy to be charmed by the spell of the birds and the wizardry of the artist.