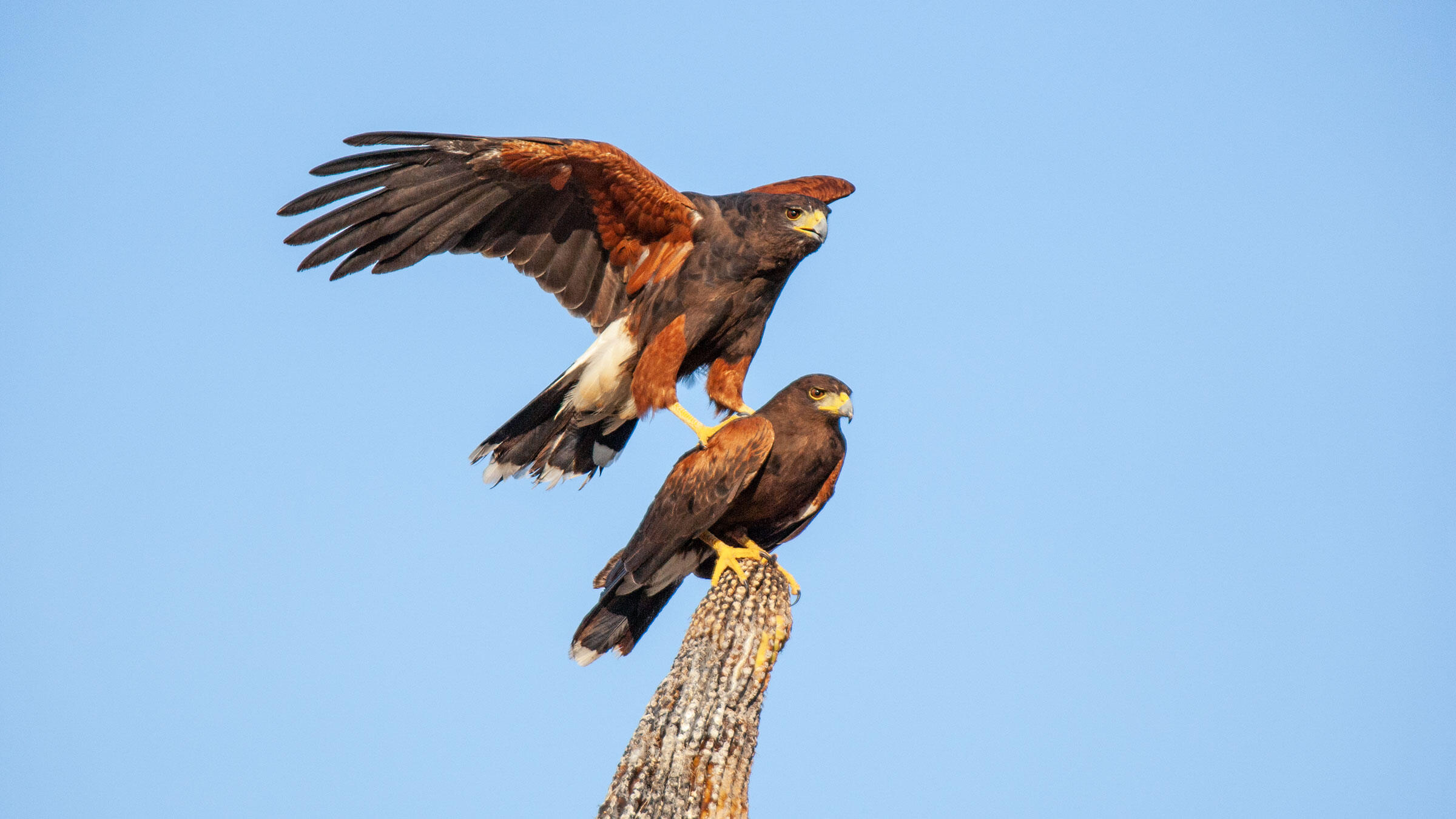 Better Know a Bird: How Harris’s Hawks Hunt Like Wolves to Bring Down Prey

Teaming up helps these agile raptors take on animals twice their size. But we’re still not sure why they stand on each other.

We tend to think of raptors as solitary hunters, and for the most part that’s true. Unfortunately for the cottontails and jackrabbits of the American Southwest, however, Harris’s Hawks hunt in packs, like wolves with wings.

They aren’t the only birds of prey known to team up. Aplomado Falcons sometimes hunt in pairs, as do Peregrine Falcons and Golden Eagles. But none of these raptors match the Harris’s when it comes to coordinating a kill. “They have the most sophisticated cooperation that has been documented to date,” says James Bednarz, an avian ecologist at the University of North Texas who has authored several papers on the species.

Bednarz spent the 1980s studying Harris’s Hawks in the New Mexico desert, applying scientific rigor to earlier reports that the birds are communal hunters. He and a research assistant fitted about 40 hawks with radio transmitters to track their movements. Then, for hundreds of hours, they stood on a pickup truck bed and observed them through a spotting scope. Before long it became clear that the birds—which lived together, most often in groups of five—were indeed cooperating in complex ways to bring down prey.

At daybreak, the hawks gather, often all on a single branch, cactus, or utility pole, in what Bednarz calls an assembly ceremony. They then split up into two groups. One group flies perhaps 200 meters to a new perch and scans for prey. A few moments later, the other group flies past, finding its own lookout point. They carry on this way, methodically leap-frogging one another, with each group watching the other closely. Eventually one team spots prey, signals to the others—“They might go horizontal and start bobbing their heads,” Bednarz says—and the groups converge. The hunt is on.

At daybreak, the hawks gather, often all on a single branch, cactus, or utility pole.

“It knocked our socks off when we started making these observations,” Bednarz says. “We’d watch a group make a kill and we’d just look at each other: Did you see what I saw?”

What they saw was an arsenal of hunting methods that Bednarz boiled down to three main tactics. In what he dubbed the surprise pounce, the whole group converges on the rabbit from various angles so that if one misses, others surprise it from a different direction. From a pickup-bed lookout hundreds of meters away, “You see them bouncing up and down like they’re bouncing on trampolines,” he says.

When a rabbit finds shelter in a thicket, the hawks turn to what Bednarz calls the flush and ambush. One or two birds plunge into the brush far enough to scare the unfortunate critter out of its hiding spot and into the waiting talons of other hawks perched nearby.

“The most spectacular was the relay attack,” Bednarz says. That’s when one hawk dives down between the rabbit and a patch of cover, forcing the rabbit to keep running. The next hawk blocks its escape into the next hideout, extending the chase. After diving down, each hawk gets back into the chase, taking turns as leader and keeping the rabbit on the run. “This whole process would continue for over a half-mile,” he explains. “They just kept the rabbit running constantly until it was exhausted and, via fatigue or making a mistake, it showed its back to one of the members and they made the kill.”

Their taste for cooperation makes Harris’s Hawks popular among falconers, says Jennifer Coulson, who with her husband, Tom, wrote a book on hunting with the birds. “Not only does that mean they will hunt in a group and hunt with other Harris’s Hawks, but it also means they have a special connection with the falconer,” says Coulson, president of the Orleans Audubon Society in Louisiana and an adjunct instructor at Tulane University. “They understand more than most birds of prey that you’re working for them and with them.”

While Coulson thinks the challenge of navigating rugged habitat could be one reason Harris's Hawks hunt together, Bednarz believes the bigger factor is their need to take down large and powerful prey. In parts of their range, small prey is scarce in winter. Rabbits are available year-round, but they’re risky targets. A typical adult jackrabbit weighs more than twice as much as a female Harris’s Hawk, and more than three times as much as a male, Bednarz reported in the journal Science. A kick from their powerful legs can easily break a hawk’s ribs. (One of Coulson’s largest female Harris’s Hawks died from just such a kick.) Together, the birds have the strength to overwhelm the rabbit, and its meat provides plenty of calories to go around. In warmer months, with easier prey like lizards, migratory birds, and baby rabbits available, the birds are more likely to hunt alone or in smaller groups, he says.

The birds not only hunt together, but also nest in groups. A pair’s offspring will often hang around for up to three years, and unrelated Harris’s Hawks sometimes also join the group and assist with raising young. Bednarz believes the advantages of group hunting explain their collective nesting behavior; the bonds and cooperation that arise among these units during the breeding season enable them to hunt effectively in winter. He’s now studying the DNA of hawk groups to better understand their social dynamics.

One striking way those dynamics play out is through a behavior called back-standing. It’s just what it sounds like: One bird lands on another’s back, and stands there for anything from a few seconds to nearly 20 minutes. “Sometimes it’s several birds stacked up in totem-pole style,” Coulson says. In fact, she’s read a report of a stack five hawks high.

The behavior seems to be unrelated to mating. Some observers believe it has to do with one bird wanting the other’s perch. Others think the top bird provides shade for the others. But the fact is, like much else about this fascinating bird, back-standing remains a mystery, Bednarz says.

“It happens. It’s a really interesting behavior. We don’t know why."

At the legendary tennis tournament, entry is exclusive to people. All thanks to this hard-working raptor.

Birdist Rule #93: Understand How Different Raptors Are Built to Hunt Their Prey

Other than just being cool to know, it can also help you find and identify them.