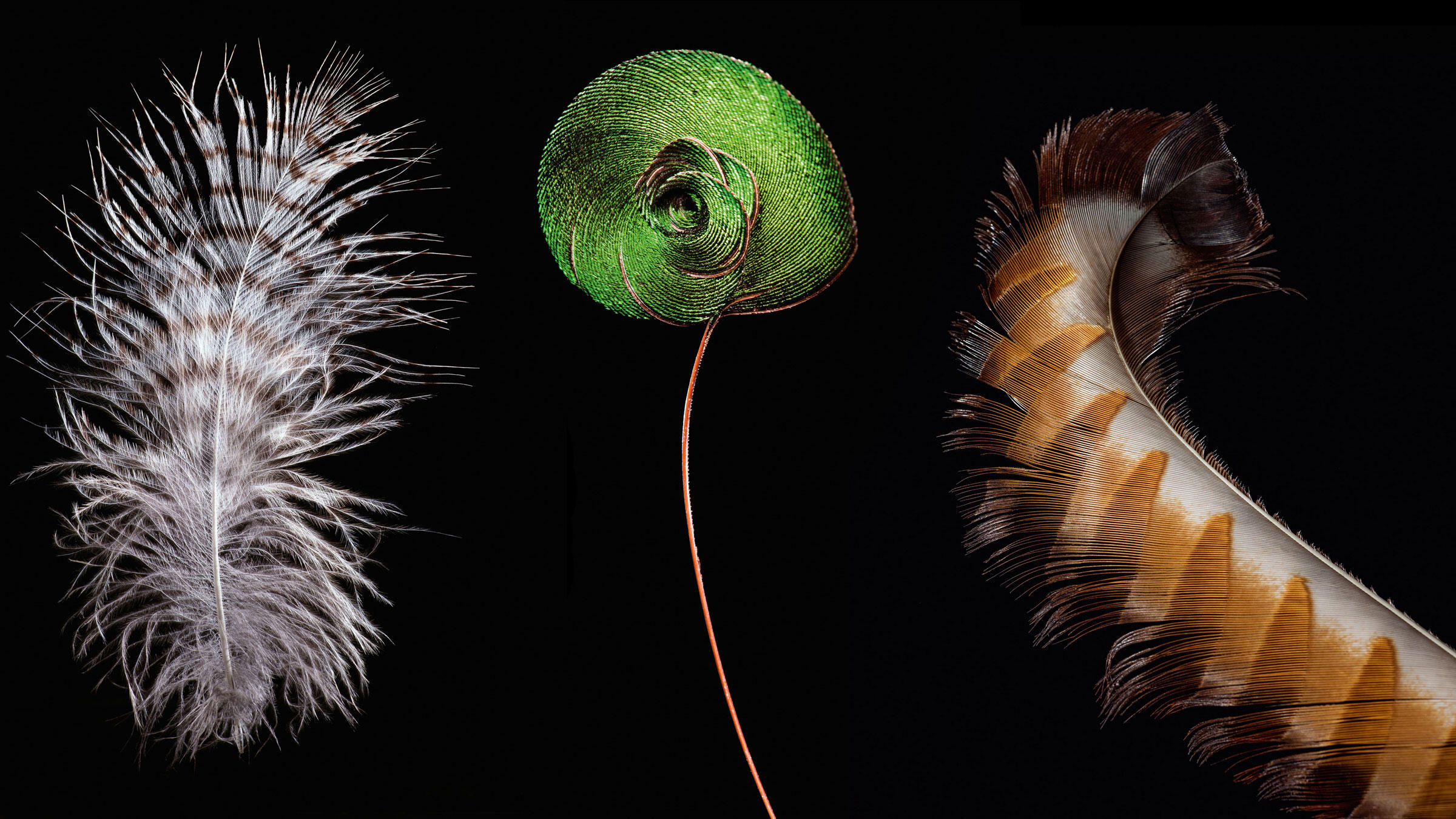 “Form follows function, then beauty follows form.” That’s how the feather came into existence, according to photographer Robert Clark, whose new book, Feathers: Displays of Brilliant Plumage, pays homage to the ingenuity of avian evolution.

Take the Great Argus, for instance. The male’s wing feathers, Clark explains, are the centerpiece of its mating dance. Not only do the layers of patterns contrast the rest of the argus’s speckled but drab plumage, scientists believe the shapes may also mimic the seeds that the birds eat. Or the Spotted Eagle-Owl, which uses down plumage to keep its breast warm and serrated flight feathers to dampen the sounds of its massive wingbeats as it hunts. Meanwhile, the King Bird-of-Paradise has a pair of bizarre, wiry quills on its tail, which the male bounces up and down while attempting to woo a mate. Every feather add to a species' personality; every feather lives to serve a purpose. 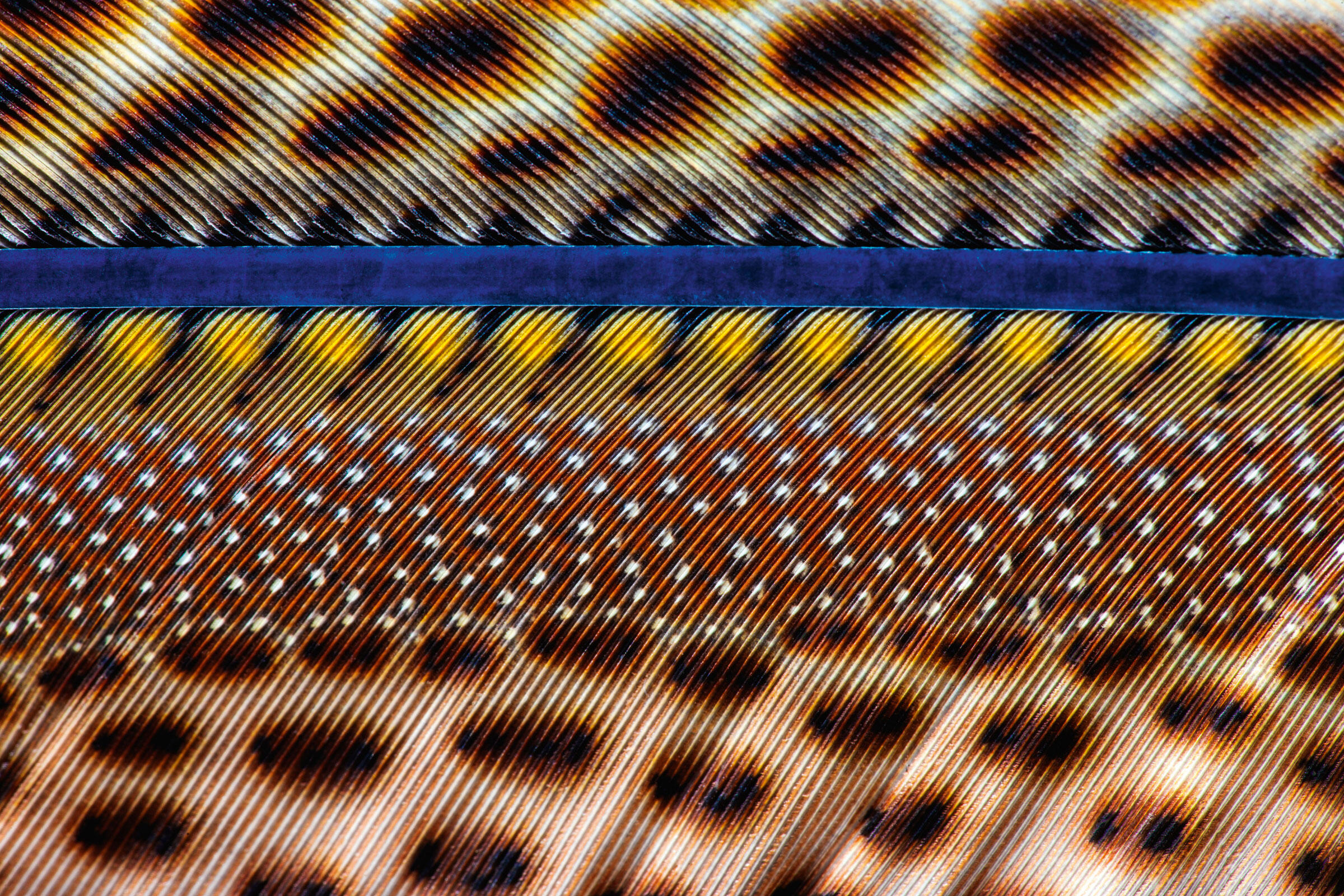 Growing up in Kansas, Clark would save the pinions left behind by meadowlarks and quail. But he truly began to appreciate the ubiquity and complexity of feathers, and their varied forms and functions, while shooting a story for National Geographic about their evolution. That fixation stayed with him as he visited natural history museums at home in New York City and around the world, from China to Germany, photographing the plumes of 180 species of birds and their prehistoric ancestors, some positioned alone, some still attached to their taxidermied skins. 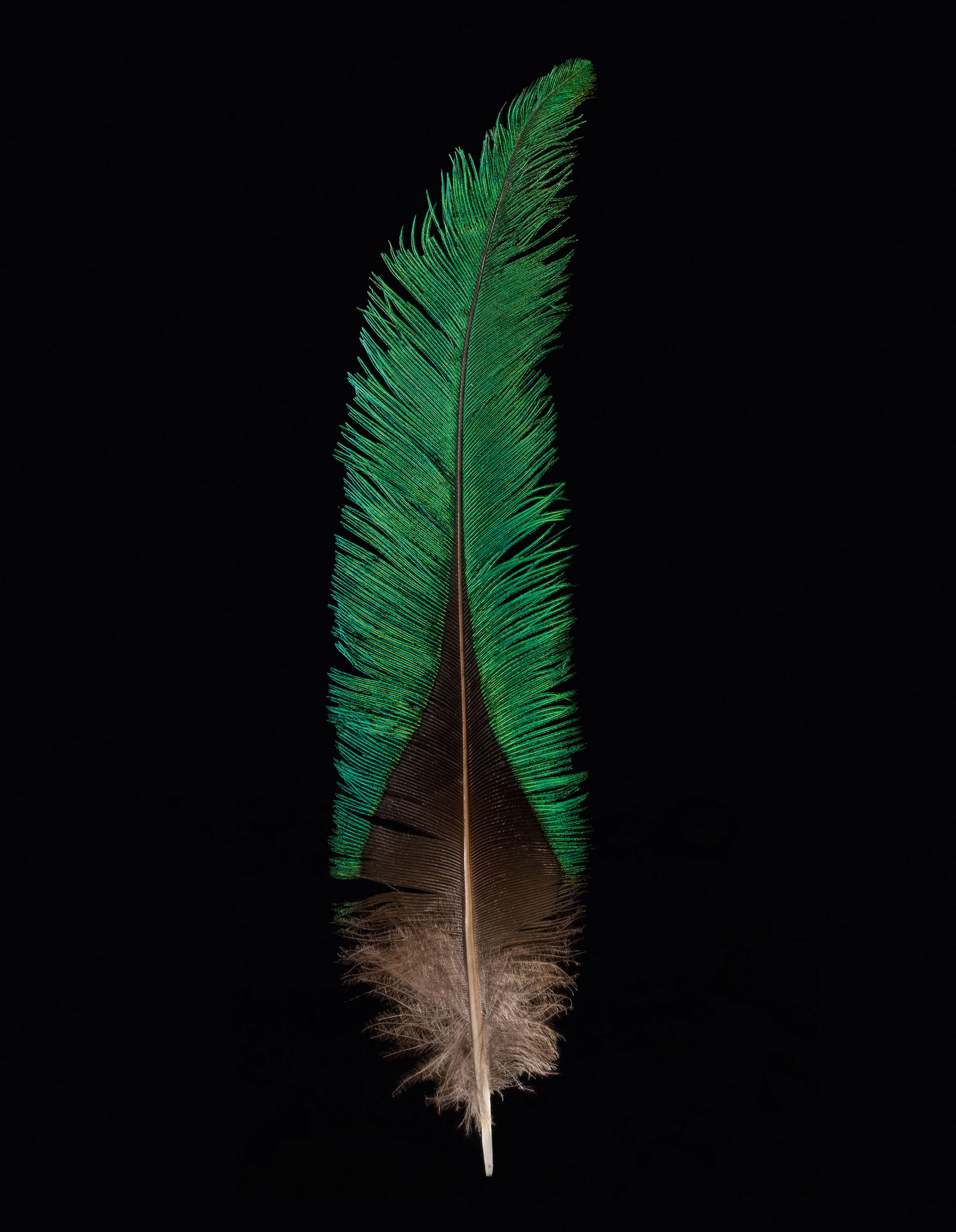 The vibrant feathers of the Golden-headed Quetzal have been sought after for hundreds of years. The Aztec and Maya of Central America once adorned their crowns with the green plumes of the local varietal, the Resplendent Quetzal. This particular feather comes from a species found mainly in the upland jungles of Bolivia, Colombia, Ecuador, Peru, and Venezuela. They are distinct from the other quetzal species in that they have orange and gold head coloration and black underfeathers. The structural coloring of these feathers modified light that hits their surface, allowing only green to escape, while the barbs near the base are a pigmentary red. 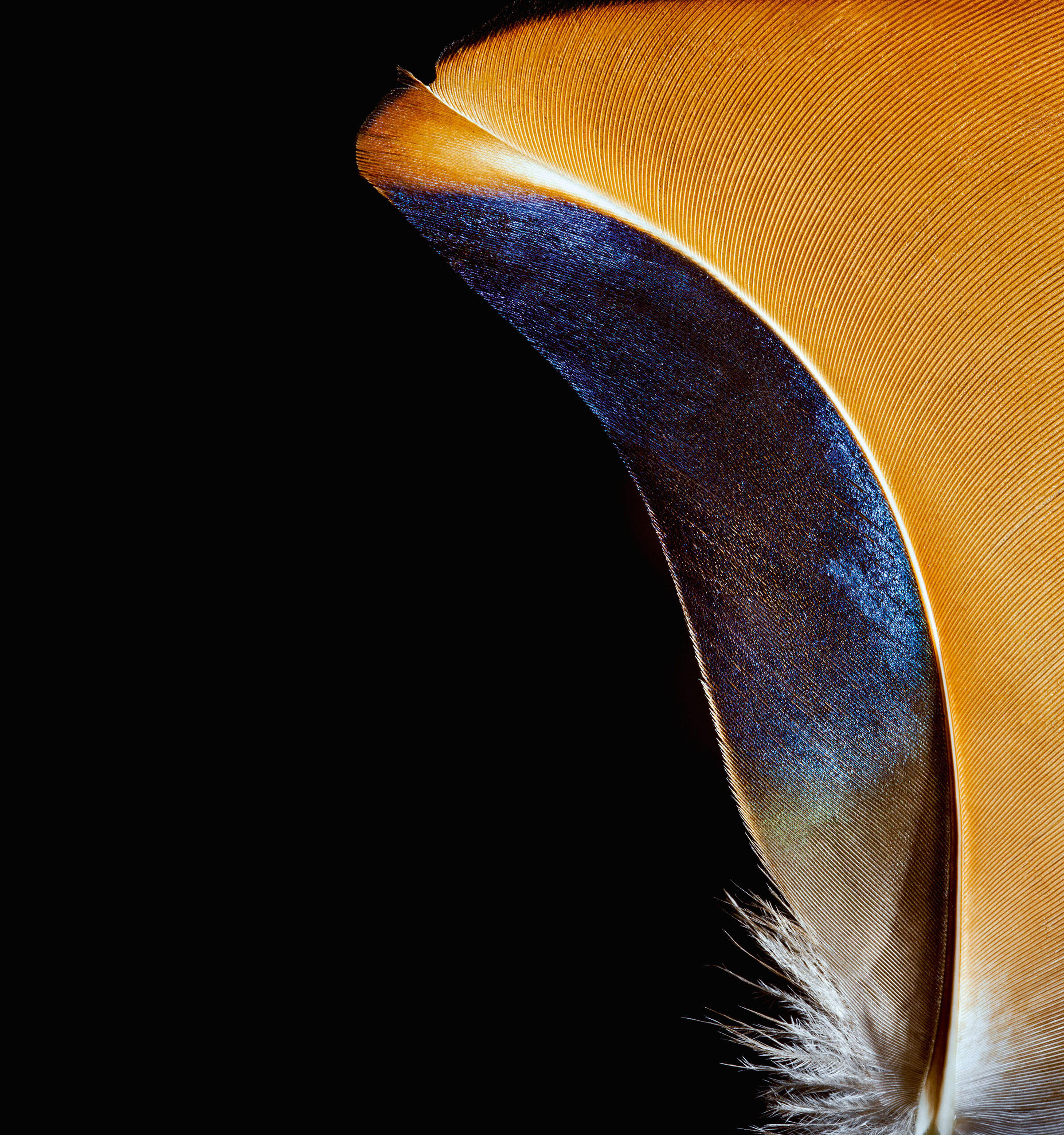 Male Mandarin Ducks—knowns as "drakes"—have "sails" on either wing. The orange and blue sails extend about two inches off the bird's back when it's floating or swimming in water. 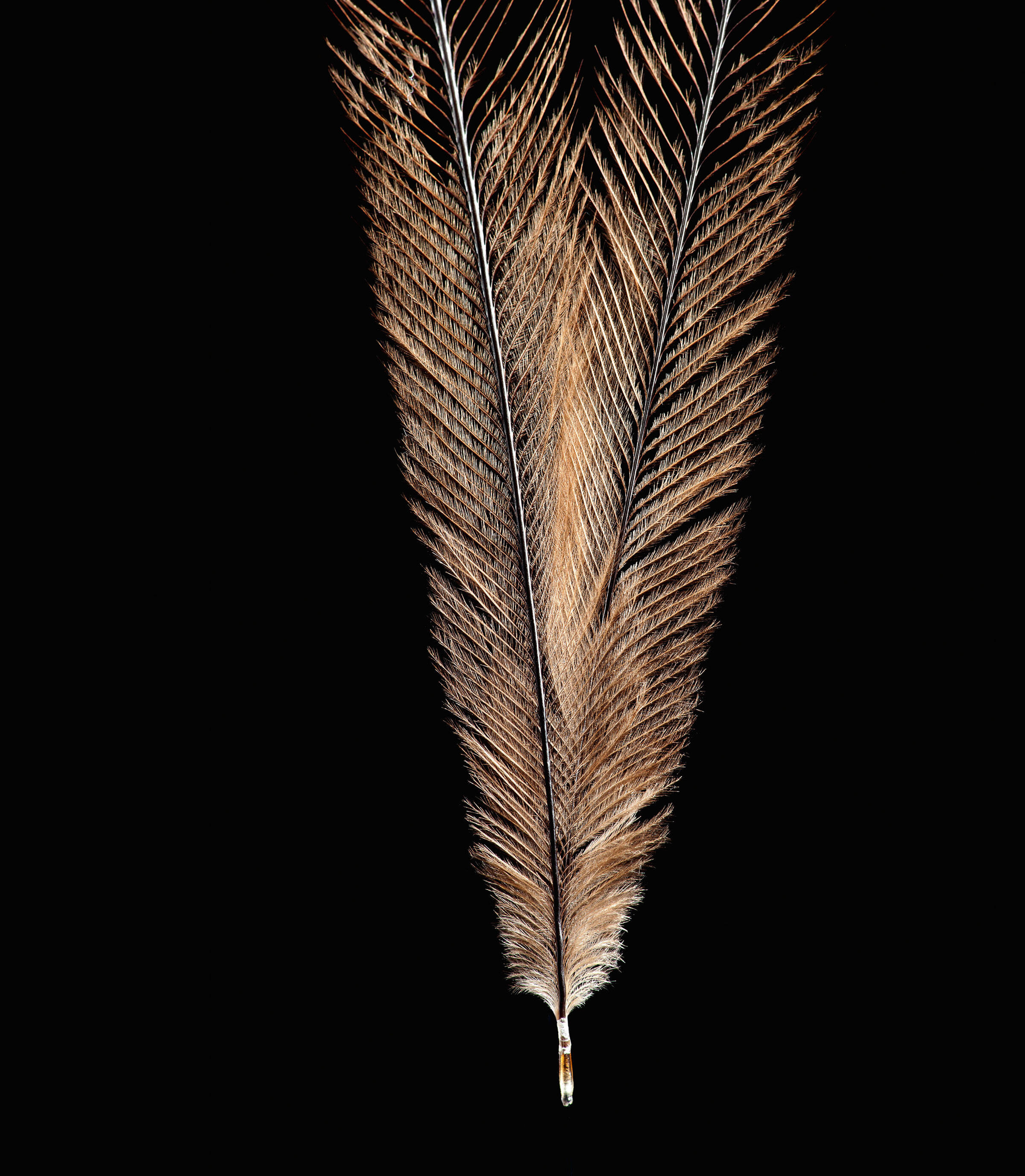 The Southern Cassowary's feathers are formed very differently than those birds whose feathers are oriented toward flight. As seen in this image, the feathers do not stick to one another because they do not need to be streamlined or lie against one another neatly, as flight feathers do. Photo: Robert Clark 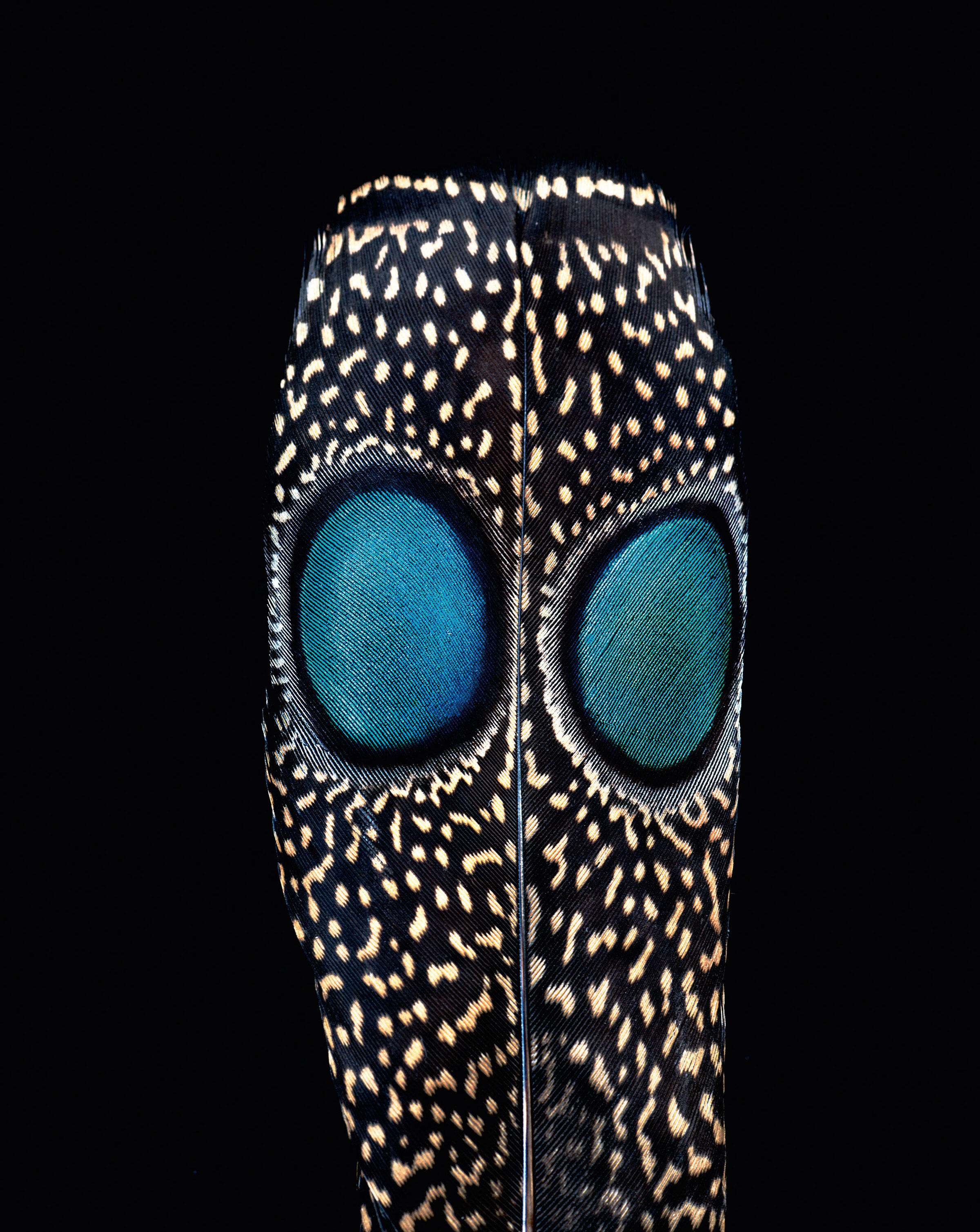 The largest of the Asiatic Pheasants, the Grey Peacock-Pheasant sports tail feathers dotted with ocelli—round markings that look like an eye—that appear to change color in different light. During the male bird's mating dance, he directs his colorful feathers toward the intended female. 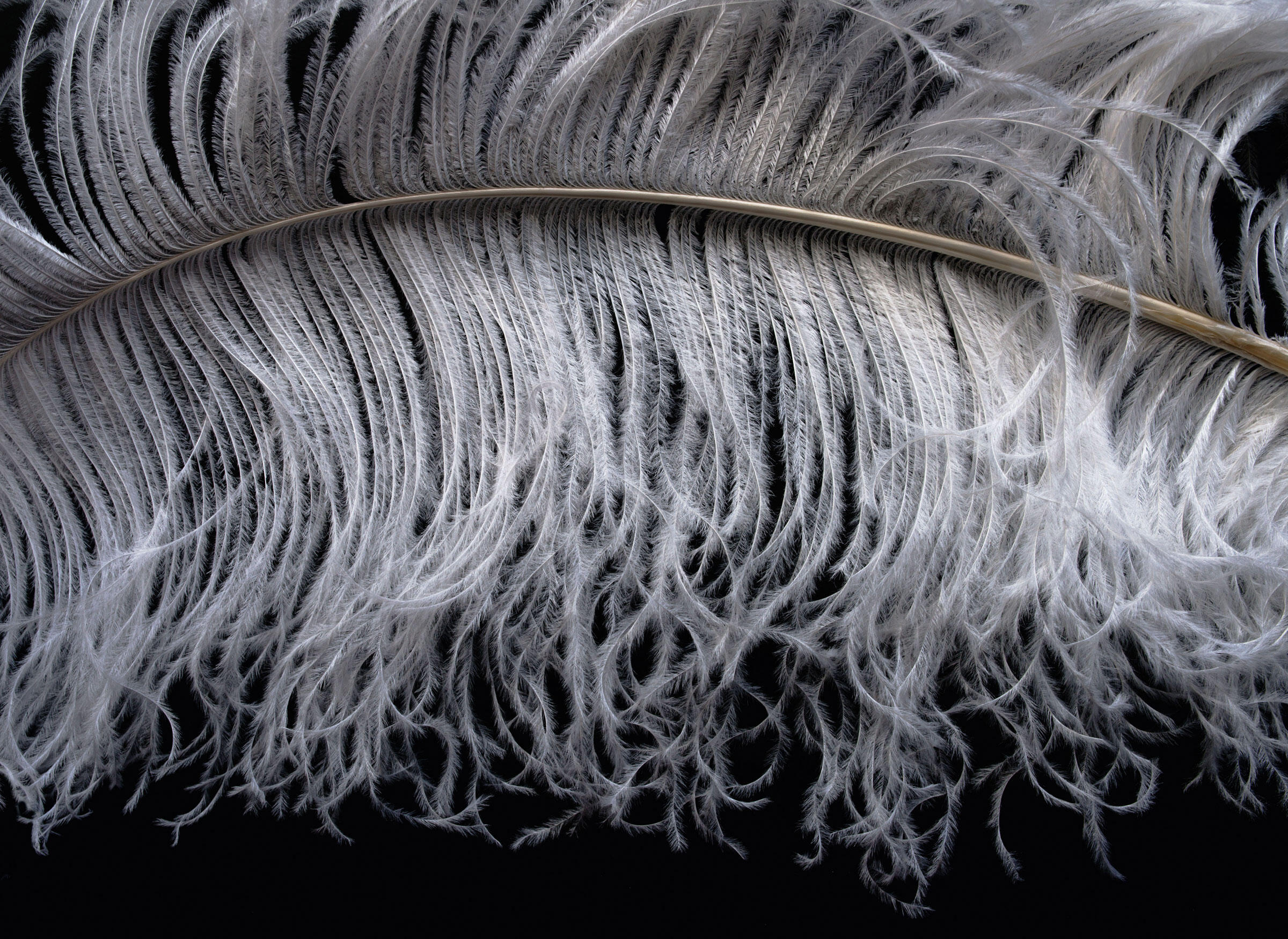 Also knows as the camel bird, the Ostrich has one of the largest-ranging distances of a terrestrial bird. The birds' powerful appendages allow it to reach speeds of 41 miles per hour. Their otherwise useless feathers can be used to adjust for balance while the bird is running. 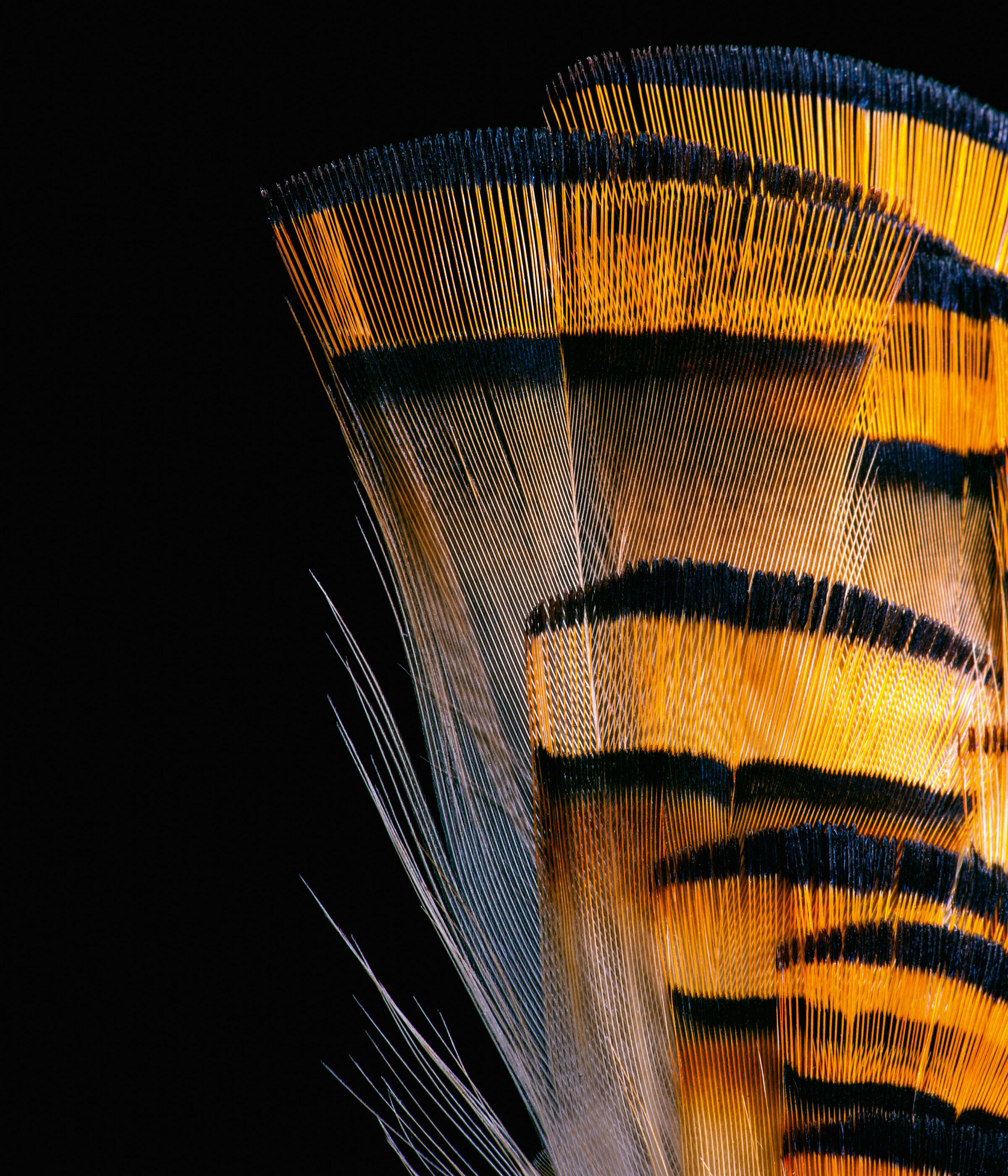 A detailed view of the Golden Pheasant's crest feathers overlaid over one another. Crest feathers such as these are ornamental. But though they serve no flight function, these feathers are crucial to attracting a mate. Males with vibrant colorations and well-preened feathers are the most attractive suitors. The layered of the bird's feathers obscures the less colorful bases of the crested feathers. 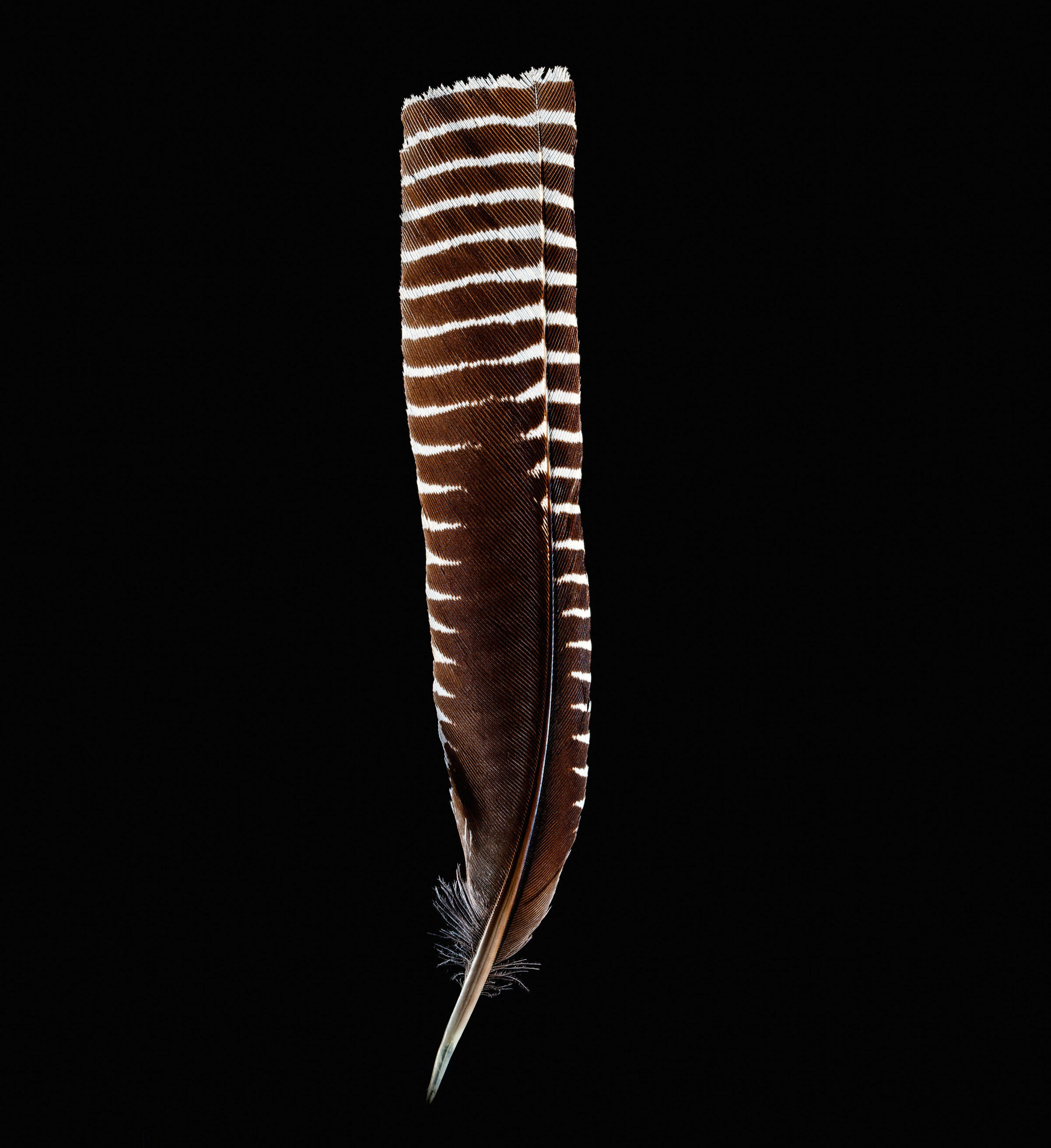 Green-backed Trogons belong to the Trogoniformes order, known for their heterodactyl feet, with two toes facing forward and the other two facing backward. Named for their astonishing tail feathers, the Green-backed Trogons have beautiful bold tail feathers indicative of a species that takes sexual display very seriously. While this feather may look broken at its end, the feather is truncated naturally.

While snapping the specimens, Clark worked with various shadows and angles to give the plumes more depth, but made sure to leave any imperfections in the feathers as is. “Some birds look boring,” he says, “and then you turn the light and they become dynamic.” In the book, these ethereal flight feathers, tail feathers, contour feathers, and down feathers appear as close-ups on black backdrops, accompanied by explanations of their adaptative performance and the behaviors they dictate. Clark says his aim was to balance an appreciation of the physical beauty of the feathers with reverence for their finely tuned evolutionary function. After all, it’s the perfect marriage of the two that makes feathers so breathtaking. “If a human tried to invent a feather,” says Clark—“Well, good luck.”