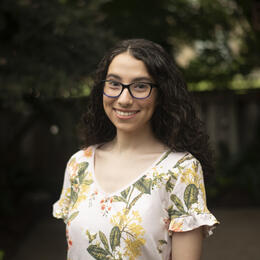 Bird Warde is a freelance illustrator in Cincinnati who designed Audubon's 2022 Let's Go Birding Together collection. Their work focuses on the natural world—not just birds, but plants, fungi, and mammals as well. In addition to commercial illustration and graphic design, they're currently working with their partner on Camp Mustelid, a project that focuses on life in the outdoors. They especially love forest critters, camping, and, of course, birds—just like we all do. We recently spoke with Bird about their work and where they find inspiration. You can watch the entire interview here. A curated version of that interview, which has been edited for length and clarity, has been included below.

How did you get started with illustration?

I've been drawing since I could pick up a pencil, but I got into illustrating specifically when I was in college. I went to SVA (ed note: School of Visual Arts in New York City) specifically to study cartooning, but as I was there, I just fell more in love with the idea of creating single pieces that spoke for themselves.

What made you interested in the natural world and birds?

My parents brought me to nature centers all the time when I was growing up. We visited the Greenwich Audubon Nature Center in Connecticut, and I've worked at two other nature centers over the years. So that was a really big influence on getting into wildlife. But otherwise, I've always just had that like natural inclination for nature. For birds specifically, I had a professor at SVA named Mike Feller who is also the chief naturalist for the New York City Parks and Recreation Natural Resources Group. I saw that he was offering a class on bird evolution and I thought, “Oh, that sounds cool. I like birds. I like evolution.” And it ended up just like opening my eyes to the world of birding.

Where do you find inspiration?

My biggest inspiration, of course, is nature itself. But I'm also really inspired by other artists. Many of my friends do great wildlife work, like Jamie Green or Lee Ellison. And I also really love the work of like Wyatt Grant and Brett Stenson. I'm also a big fan of older field guides because I always feel like they draw the birds in such an interesting way. The further back you go, the less it's like, “Well, this definitely isn't exact.” It's interesting to see how they interpreted the bird without having a lot of reference photos.

Can we talk about process?

Bird: It's a little different for every project. I start by doing a lot of sketches based on the idea, and I'll get a lot of ugly sketches and things that aren't very good. I also like to do them both on paper and digital because I find that I'll get very different results from each. On paper, things would be a lot messier and raw, and I feel like I get better ideas that way. [With the Let’s Go Birding Together design], I did some sketches on paper, and once I felt like I had a good idea of what I was feeling, I moved on to digital where things could be cleaner. Once I had the sketches, I presented them to the Audubon team, and then they helped me narrow down which ones they like best and [provided feedback] like, "Oh, well, what if you combine these two?" Working with the client is a really good way to get more ideas. From there I went with their advice and I picked a couple of versions to clean up, and then the Audubon team presented those to their team again. And then we kept narrowing it down till we got the right artwork and the right feel that they were looking for.

What are you working on right now?

Bird: So right now I'm working on our Camp Mustelid collection—I guess you can call it for the fall. We're working on a couple of sweater designs and some new hats and stuff, but I'm also working on a shirt design for Hawk Watch, which I'm really excited about.

What do you hope your viewers take away from your art?

Bird: Thinking about having some big impact stresses me out, so I have like a small goal with my art: I just want to inspire people to get out and explore the nature that's around them. Go out and find your favorite bird! Find your favorite animal! And I've had a couple people say to me, “Oh, I've never heard of this animal that you drew before.” And that makes me so happy because it's like, “Oh my God, you know, about an animal because of me. That's awesome!”