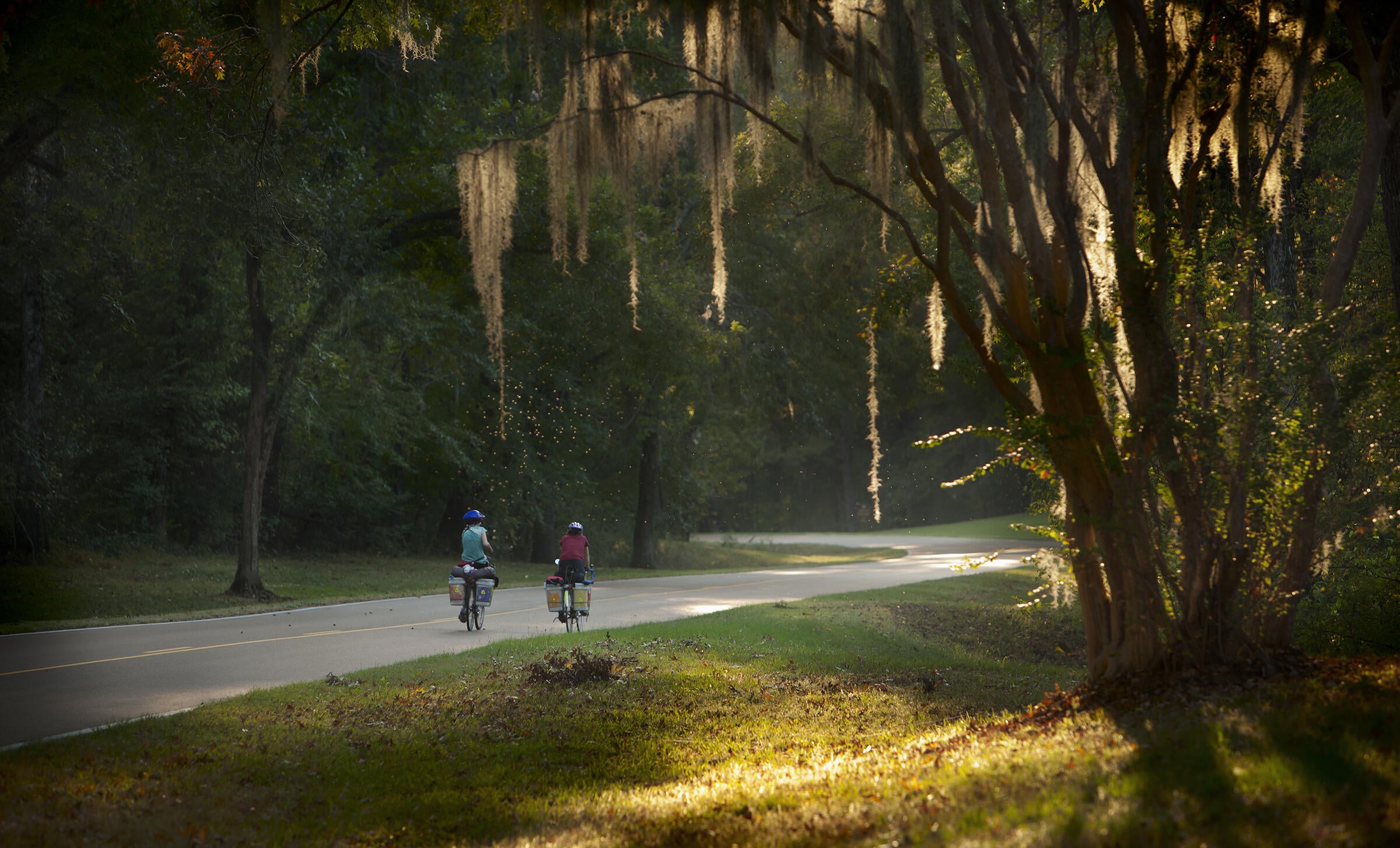 Mississippi offers great birding in pockets of hardwood forest throughout the state and on its sandy beaches of the Gulf Coast.

Many people associate Mississippi with the agricultural land of the Delta: the alluvial plain created by thousands of years of meanderings of the Mississippi River. Though it is true that much of the state is cropland, it’s interspersed with refuges protecting remnants of once-vast bottomland hardwood forests. These spots provide habitat for waterfowl, wading birds, and woodland species such as the Red-headed Woodpecker and Prothonotary Warbler.

Large reservoirs, including Sardis Lake and Ross Barnett Reservoir, are at their best from fall through late winter, when they’re home to waterfowl such as loons, grebes, and rarities like the occasional scoter. The sandy beaches and barrier islands of Gulf Islands National Seashore allow observations of shorebirds and seabirds, including the Magnificant Frigatebird and Northern Gannet. The Mississippi Coastal Birding Trail helps guide visitors to destinations in six southern counties.

One of the great birding experiences of the Gulf Coast is a spring “fallout,” when northbound birds swarm a patch of woods after crossing the Gulf of Mexico. Several sites along the coast, including Ansley Preserve, can host this spectacle, though such events are always weather-dependent and can’t be predicted very far in advance.

Stop at the Grand Bay Coastal Resources Center, just a few minutes south of Interstate 10, for maps and advice. Pick up a copy of the free guide “Selected Birds of the Grand Bay National Estuarine Research Reserve and Vicinity” to enhance your birding. Just a mile south of the center is the Oak Grove Birding Trail, which winds through hardwood and pine forest to marshes near Bayou Heron.

Birders can also enjoy walking trails at the Mississippi Welcome Center, located at approximately mile 74 of Interstate 10 near the Escatawpa River.

Dedicated to one of the rarest bird subspecies in the world, this refuge was established to protect the Mississippi Sandhill Crane, a nonmigratory form that nests in the pine savannah along the Gulf Coast. In the 1970s there were only about 30 birds left, but conservation efforts raised the total to 129 in 2016.

Much of the refuge is, understandably, closed to avoid disturbance to the cranes. Nonetheless, it may be possible to see them as they move daily to rest and feed. Stop at the visitor center just north of Interstate 10 to ask about viewing and to see exhibits and programs on this special bird. Tours to see cranes are offered in fall and winter.

The Mississippi units of the Gulf Islands National Seashore encompass six major islands and one tract on the mainland that’s accessible by vehicle. The Davis Bayou area, in Ocean Springs, offers a chance for birders to walk through a maritime forest and scan marsh, bayou, and open water, and can be especially good in spring migration.

After stopping at the visitor center to see exhibits and learn about ranger-led programs, walk the two-mile trail, which passes through coastal forest and reaches two bayous. Drive to the end of the road leading to the fishing pier to look over the bay, and also take Robert McGhee Road to the roadside boardwalk overlooking a marsh. Then continue to the boat launch area.

The forest here was badly damaged by Hurricane Katrina in 2005, but is recovering and can still be a migrant trap in spring migration, when birds that have flown across the Gulf of Mexico stop to rest and feed.

Local birders often drive the 8.5 miles of Beach Boulevard that runs along the Gulf of Mexico shoreline from the Highway 90 bridge in Bay St. Louis to its end at Bayou Caddy. This is a very popular summer recreation area, so the best seasons are fall through spring.

The sandy beach can have wading birds, shorebirds, gulls, and terns, and winter can bring sightings of scoters, Red-breasted Merganser, and Northern Gannet. Magnificent Frigatebird can be seen in late summer. Grassy fields and marshes add variety to the birding.

The road passes Buccaneer State Park, which has Clapper Rail, Red-headed Woodpecker, and Brown-headed Nuthatch, and can be a good “fallout” spot during spring migration. A 1.8-mile nature trail leads through woodland recovering from Hurricane Katrina in 2005 and accesses a lookout platform at a bayou.

A site on Ansley Road, about seven miles south of Highway 90 in Hancock County, is a noted hot spot for spring and fall migrant songbirds. Part of the Hancock County Marshes Preserve, Ansley Preserve has a bird list of more than 230 species. Be aware that this is a hunting area in parts of fall and winter.

Trails here lead into woods and past marshes and ponds, making for a fine diversity of habitat. Peak birding here happens in April and early May, especially after a storm with northerly winds, when vireos, thrushes, warblers, tanagers, and orioles can decorate the trees. Also check the marshy area north of the road for wading birds.

Pipeline Road in the Pearl River Wildlife Management Area has become a favored drive for birders in the vicinity of Jackson. Around 200 species have been recorded along this unpaved but well-maintained road. A user permit from the state Department of Wildlife, Fisheries, and Parks is required to enter the area; one can be obtained from any department office or online.

Begin the route off Highway 43 on the north shore of Ross Barnett Reservoir. The road in part runs alongside the massive reservoir and into swampy areas, in two miles turning east to parallel the beautiful Natchez Trace Parkway. Most birding is done by simply driving the road and getting out at likely spots to look and listen.

About 25 miles south of Greenville, Yazoo National Wildlife Refuge protects a splendid remnant of the once-vast bottomland hardwood forests of the Mississippi Delta. Its 13,000 acres also encompass many lakes, ponds, and wetlands, as well as agricultural land.

Like many national wildlife refuges, Yazoo was founded to preserve waterfowl populations, and in winter it can host 50,000 geese (Snow is most common) and 100,000 ducks. In addition, it’s home to a very large nesting colony of wading birds such as Great Egret, Snowy Egret, and Little Blue Heron.

Yazoo has many miles of roads for wildlife watching, as well as a quarter-mile boardwalk trail and two observation platforms. The Cox Ponds area is managed for shorebirds in late summer and can attract 15 or more species.

Nesting birds here include Wood Duck, Double-crested Cormorant, Anhinga, Mississippi Kite, Red-headed Woodpecker, Prothonotary Warbler, Painted Bunting, Dickcissel, and Orchard Oriole. If the birding happens to be slow at Yazoo, it has a healthy population of American alligator to enjoy.

One of the finest wildlife-viewing sites in the region, Noxubee is located about 13 miles south of Starkville. Of its 48,000 acres, more than half are bottomland hardwood forest where the hooting of Barred Owl and the drumming of Pileated Woodpecker sound through the bald-cypress trees.

The refuge also comprises substantial pine forest, home to the endangered Red-cockaded Woodpecker. This small bird requires mature pine trees in which to excavate its nest cavity, as well as an open understory. It’s usually possible to see the species at “clusters” of nests on the aptly named Woodpecker Trail. Ask staff members about other areas.

Wading birds such as Great Egret, Snowy Egret, and White Ibis roost around the refuge lakes, and post-breeding Wood Stork arrives in late summer, when Roseate Spoonbill sometimes shows up. The lakes are home to thousands of waterfowl from fall through spring. Bald Eagle is another winter visitor and has nested here. Alligators are usually easily seen except in winter.

With one of the highest species lists of any site in Mississippi, St. Catherine Creek is a rewarding place to look for waterfowl, shorebirds, songbirds, and everything in between. It may be best known, though, for the masses of wading birds that flock here in late summer, including large numbers of Wood Storks.

The refuge is located on the Mississippi River, west of Highway 61 about 12 miles south of Natchez. Most visitor activities center on the section west of the community of Sibley, where the office can provide maps and advice. At times when the Mississippi River is high, some refuge roads are flooded. Much of the refuge is former cropland that is being reforested. While is has much bottomland hardwood forest, it’s also noted for its uplands formed of loess, a fine, wind-deposited soil.

Up to 50,000 waterfowl may winter at the refuge, with abundant dabbling ducks such as Gadwall, Mallard, and Northern Shoveler. The peak for wading birds is August and September, when wetlands can teem with Wood Stork, herons, egrets, night-herons, ibises, and Roseate Spoonbill. During this period birders may find Mottled Duck, Neotropic Cormorant, American White Pelican, and Peregrine Falcon as well. August is also the peak period for migrant shorebirds; look for them resting and feeding in impoundments managed for their needs.

The dam area on Highway 315 has many areas from which the lake can be scanned for waterbirds. All three scoters and Red-throated Loon have been recorded here, and American White Pelican is present from fall through spring.

The Lower Lake (the area below the dam) can be a good birding spot as well. Bald Eagle has nested near the Sandstone Nature Trail, and the Clear Spring Nature Trail winds through a bald-cypress swamp. Rare gulls have been seen at the lake’s outflow among the common Bonaparte’s, Ring-billed, and Herring gulls.

The Hurricane Landing recreation area on the south shore, just 20 minutes from Oxford, offers many viewpoints of the lake. Osprey nests in this area, and depending on water level the lake can attract wading birds and shorebirds.