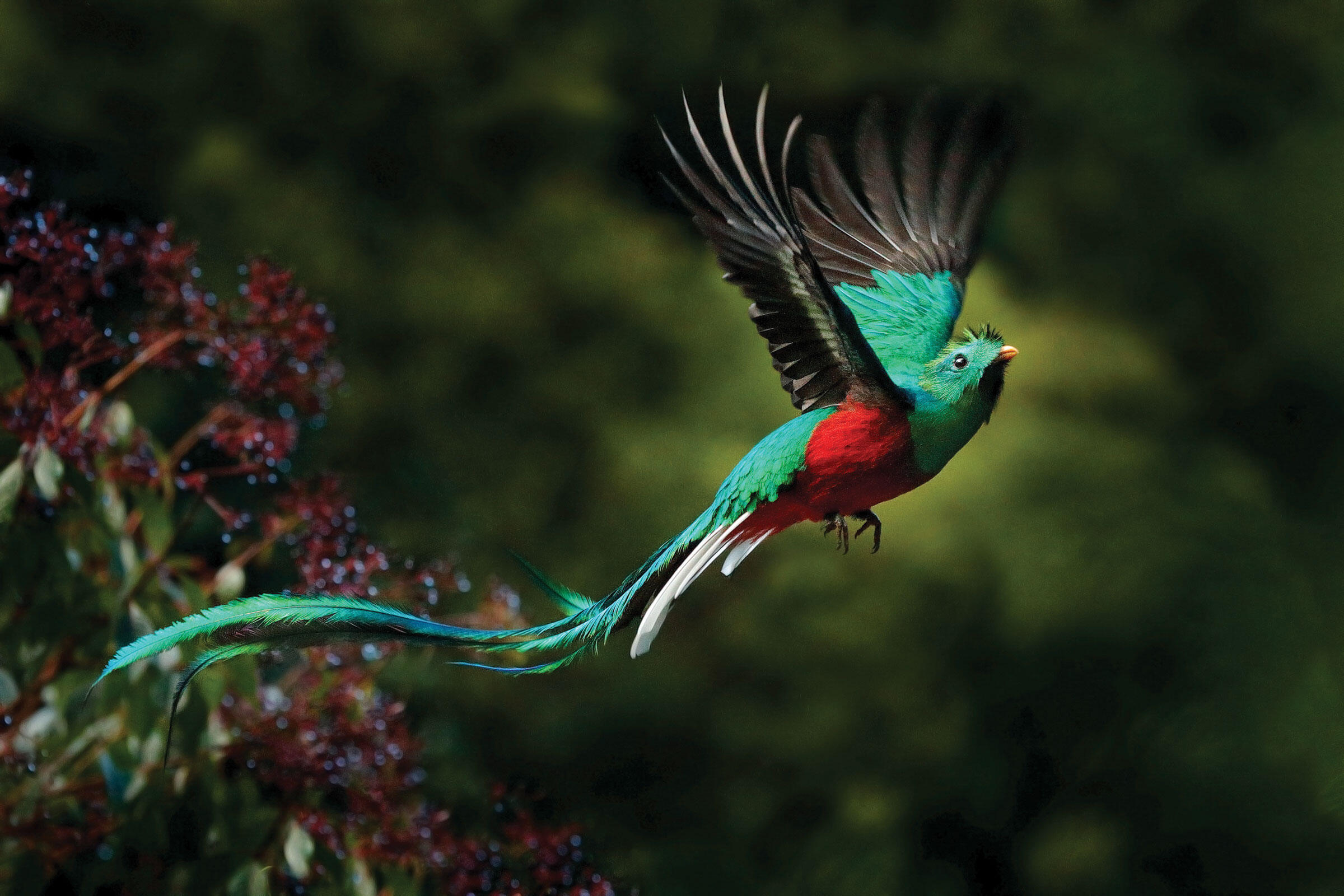 Guatemala’s Lake Atitlán is often listed among the world’s most beautiful lakes. Formed 84,000 years ago when built-up gases blew the top off a massive volcano, the lake is more than 1,100 feet deep and cradled by three newer volcanoes, their looming profiles visible through a low layer of fog as my boat crosses the water just before sunrise.

I’ve come to the Atitlán region to catch a glimpse of some of the more than 400 bird species that have been spotted here, as well as experience a culture whose living traditions span centuries.

Approaching the town of San Juan, the boat passes between subsistence fishermen tending to their lines and traps. As we glide up to the wharf, I meet my Mayan birding guides Juan Chocoy, Juan Soliz, and Benjamin Hernandez. The three guides are participating in an innovative guide-training program supported by Audubon. Through bird-based tourism, the program promotes conservation in Latin America and the Caribbean by creating economic opportunities in regions with exceptional bird life and biodiversity.

Until recently, Chocoy tells me, he had been a fisherman.

“I was lucky to make $50 a week fishing,” says Chocoy, who left school after the second grade to help support his family. “Now, I can make up to $100 for a half-day of bird-guiding.”

For the program's pilot locations like Atitlan, Audubon and its partners developed a bird-guide training curriculum tailored to the local culture, as well as basic business, hospitality, and language training. The program also supplied equipment for guiding and trail development.

Everilda Buchan was born near Guatemala’s Pacific Coast and raised on the farm where her parents worked. She was forced to drop out of school after second grade to help support her family.

“I was born in nature, and that’s where I want to bring people, especially children,” she says. “Those who know nature are the ones who care about it. Those who don't know it don't care.”

Buchan, who had the highest score in the region’s advanced bird-guiding course, says the course’s multi-day field trip to different regions of Guatemala was the highlight of her life.

“It was like a university for me,” she says. “Discovering the other places in my country—the jungle, the high mountains, the seacoast—how else could a person like me ever hope to experience these things?”

The end of Guatemala’s 36-year civil war in 1996 boosted bird tourism, but the disparities that led to the war have persisted. In towns and villages surrounding the lake, which are mostly populated by indigenous Tz’utujil and Kaqchikel people, more than 75 percent of residents live below the poverty line.

Guide Alfredo Tol is transitioning to full-time guiding from driving a three-wheeled “tuk-tuk” taxi. Pablo Chumil, who had been leading nature and archeology tours for several years, is now guiding birders almost exclusively as a tour leader for Rockjumper Birding Tours. German Cholotío was working as a coffee roaster and considering a career in nursing when he heard about the birding course.

“I came mainly out of curiosity,” Cholotío says. “But on the second day they gave us binoculars and I focused in on a Blue-gray Tanager. At that moment I fell in love with birds. I wanted to know everything I could about them.”

Earlier this spring Cholotío was walking through Antigua, Guatemala’s colonial capital, when he noticed three tourists with binoculars. “We started talking about birds, and they told me they wanted to see a Horned Guan,” Cholotío says. “I knew where to find them, so they hired me.”

I wasn’t lucky enough to spot a Horned Guan on my trip, but over the next few days my guides would call my attention to dozens of fascinating birds. We went out one morning on a quest for a Resplendent Quetzal, driving up from the lakeside village of Santiago Atitlán to a spectacular vista of all three volcanoes, the lake, and the community of Santiago.

The Rey Tepepul trail, which is maintained by local birders, begins in montane forest and descends to subtropical humid forest. This is among the surest places to get a good look at a quetzal, in addition to rare regional endemics such as the Azure-rumped Tanager.

The guides’ ears are as impressive as their eyes; within ten minutes, they’d identified 25 species—including a Violet Sabrewing, a Scaly-throated Foliage-gleaner, a Hairy Woodpecker, and an Orange-billed Nightingale-Thrush. Graduates of the advanced bird-guiding course can name most species in Spanish and Latin, as well as English, which is a third language for many.

Eventually we found a family of four quetzals and spent a good 30 minutes watching them cavort through the trees. Afterward we climbed back up the muddy trail, the guides laughing and joking all the way.

“It’s hard to believe,” says Marlon Calderón, who directed the training program, “but most of these guys were timid at first. As their knowledge grew so did their confidence, and their pride. Now they are getting lots of work.”

“In a few months I went from knowing very little to becoming a specialized birding guide,” says Rony Anibal Xep. “Now tour companies are calling me, and I’m part of a community that’s helping to save forests and birds.”​

These newly minted guides say that the overall experience has been transformative, to the point that many have decided to invest in guiding as their life’s work. Many also share their passion for birds and wild places with children. Benjamin Hernandez makes presentations to schools most weeks, and Barbara Aitejal wants to expand her work with a women’s nonprofit to include an outdoor-exploration program for mothers and preschool children.

The guide training program has helped conservationists discover new ways to reach out to communities whose local ecosystems are under severe stress, says Calderón, who is with Vivamos Mejor, Audubon's local partner. “People in the villages are more open to hearing our conservation message now because they see how it can help them thrive.”

Over lunch one day, Chocoy mentions that his wife is expecting the couple’s sixth child. Amid his buddies’ congratulations and wisecracks—which come in a rapid-fire mix of Tz’utujil and Spanish—Chocoy admits that he’s daunted by the prospect of having another mouth to feed.

“But now with the guiding, thankfully, I can earn a living,” he says.

Getting there: The drive to Panajachel (the largest town on the lake) takes 3-4 hours from Guatemala City. $130-140 by taxi or private car; $25 by shuttle bus.

What to do: Audubon's offers this sample itinerary designed for birding around Lake Atitlán.

Who to contact: Find expert local guides via BirdZone Atitlán. 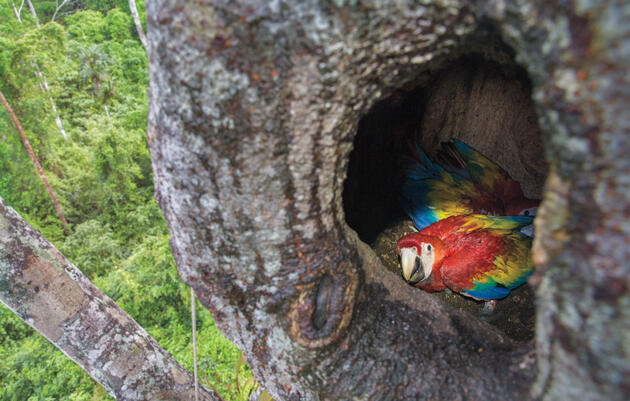 To keep macaw chicks safe, a team of rangers spends night and day watching over the birds’ nests and homes. 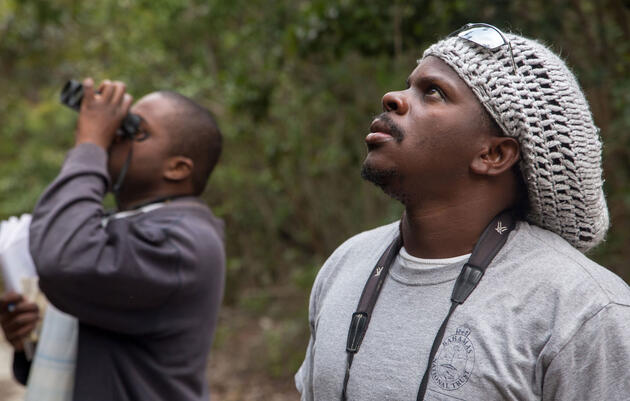 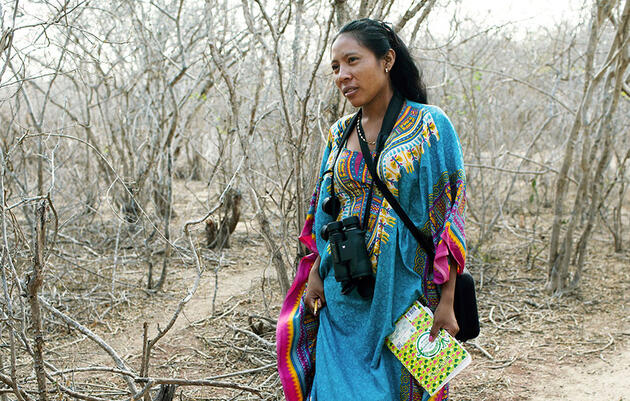