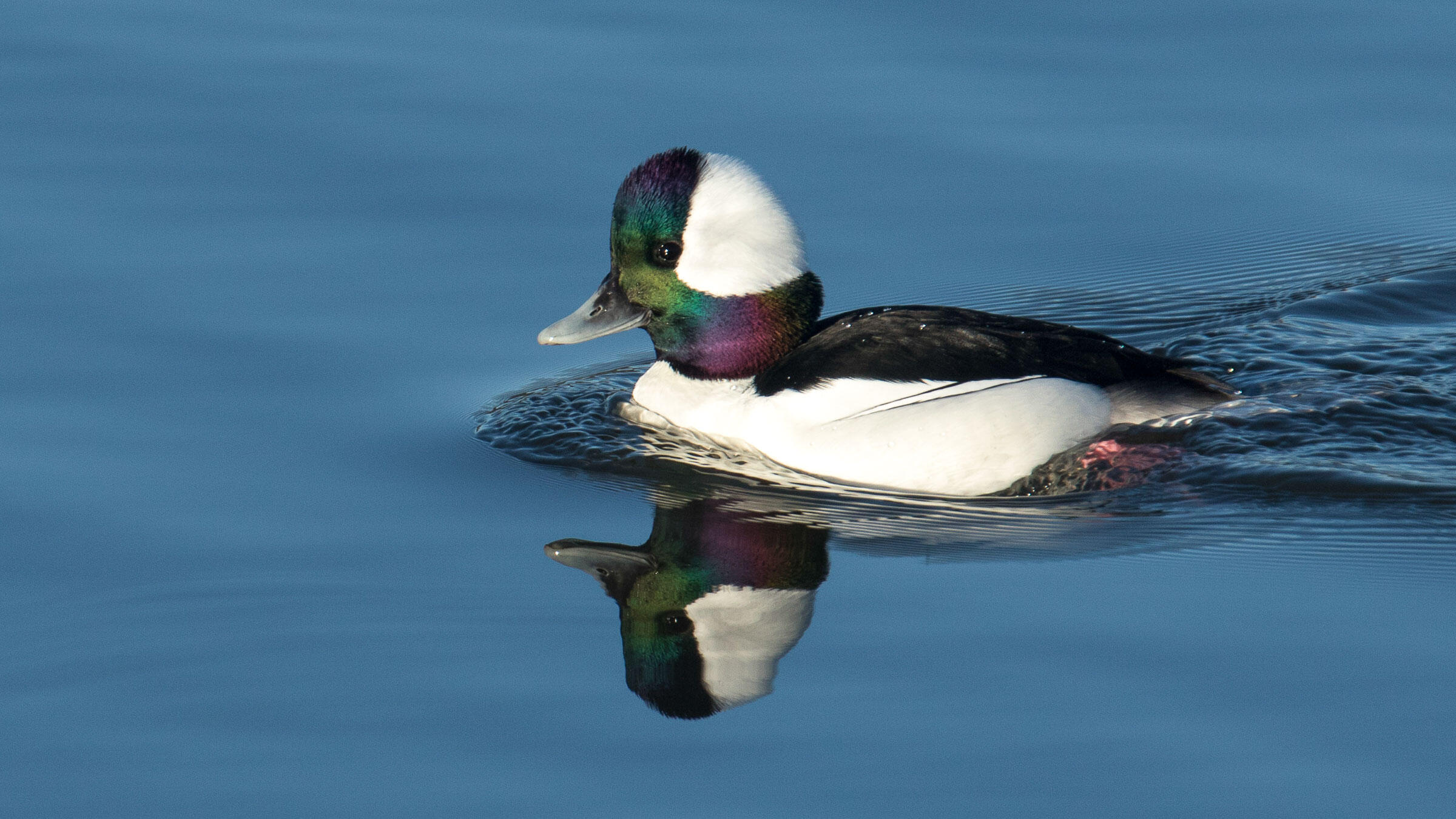 Don't be fooled: From a distance, the male Bufflehead looks all black and white, but an up-close inspection reveals an iridescent purple-green on its head feathers. Photo: Pam Polcyn/Audubon Photography Awards

Ready to move on from Mallards? Start with these adorable little ducks.

Ducks don’t get nearly enough credit from non-birders. I’ve found that the unenlightened opinion of ducks is that they’re kind of lame, slowly swimming around some urban pond waiting for an old lady to toss them some free bread. They can’t even put on a pair of pants, for goodness’ sake.

Of course, this isn’t even close to true. Ducks make up a varied and decidedly un-boring family of birds. Some are strikingly colored, like our Wood Ducks and Harlequin Ducks. Some are amazing hunters, like mergansers, which can swim underwater for long periods and snatch fish with their serrated bills. There are ducks everywhere around the world where there’s water, from fast-moving jungle rivers to the open ocean in the high Arctic.

Thankfully, it’s not difficult to get out there and find some ducks different from your typical Mallards. In fact, winter is the best season to go meet some new species, and a great place to start is with one of our most endearing and adorable ducks, the Bufflehead.

There’s a lot to love here.

Let’s start with their size. Buffleheads are tiny. Among the world’s smallest species of duck, they’re about a third the weight of a Mallard. In fact, they’re so tiny that most of their bodies seem to be made up of their big puffy heads.

They’re named after those big heads, of course. “Buffle” was an old word meaning “buffalo,” and early observers apparently drew a comparison between this duck’s noggin and that of the massive grazer. It wasn’t a friendly comparison either; to call someone “buffle-headed” in the 1600s was to say they were stupid. I don’t think there’s a connection between that usage and the duck, though, because how could you insult these little guys?

Anyway, despite their size, Buffleheads are easy to identify, even from a good distance away. From afar, drake (male) ducks appear a spiffy black and white. But if you get close enough, you’ll see that the head of a drake Bufflehead is actually an iridescent purple-green. Still, it looks black most of the time. When they’re swimming, look for a strong white line against the water, a black back and face, and a large white patch that extends back from their eye, making their head look kind of like a big, black-and-white Pac-Man. To me, anyway.

Females Buffleheads, though not quite as colorful, are also easy to identify. They’re brown all over, with a bright white patch on their cheeks. In flight, notice the diminutive size of these birds. Look for the bright white patches on the heads of both genders, and the bold white back and wing stripes on the males.
Buffleheads aren’t typically found in big flocks like some other ducks, except when they’re molting in summer or migrating in the fall. So in the winter, check for small groups of males and females on pretty much any patch of water. When their breeding grounds turn too cold, Buffleheads descend to lower elevations and wait out the winter all across the U.S., from the Great Lakes all the way down into Mexico.

In summer, you probably won’t see a Bufflehead unless you live in, like, Yellowstone National Park, the Sierra Mountains, a few other western spots, and the plains of Canada and Alaska. Even if you’re in their breeding range, don’t look for Bufflehead nests in the reeds or along the lakeshore; you need to look up. Like Wood Ducks and a few other duck species, Buffleheads nest in tree cavities most frequently made by Northern Flickers and other large woodpeckers.

Nesting in trees is a great strategy for ducks because it keeps eggs safe from terrestrial predators such as foxes. It does pose a small problem for the fledgling chicks, however. They still can't fly yet, so their first trip from the nest is a drop anywhere from nine to 88 feet to the ground below. How do they do it? They jump, of course! They bounce around a bit when they land, but they are usually unhurt. Pretty exciting way to start life, if you ask me.

You won’t find Buffleheads in trees in the winter, though. Instead, look on any bit of shallow, open water. They can be found in urban ponds with Mallards and other more common ducks (I see Buffleheads regularly at Constitution Gardens near the White House here in Washington, D.C.), or in open lakes and ocean bays.

If at first you don’t see anything, keep looking for a few minutes—the birds might be underwater. Buffleheads are divers and spend much of their time scavenging for little mollusks and crustaceans before popping back onto the surface like real-life rubber duckies.

Drake Buffleheads also begin their courtship displays in the winter, accelerating as spring arrives. Males will compete with one another in odd head-bopping maneuvers, coupled with a sort of grating, chattering noise and short, rowing flights across the surface of the water. It's all meant to impress females by showing their fancy plumage and bright pink feet. Look, maybe it’s not the sexiest thing for you and me, but female Buffleheads love it.

There you have it, your first cool, non-Mallard duck is waiting right now on a nearby lake for you to go identify. So get out there this winter and find one. You’d be a total buffle-head not to. (Sorry, I couldn't resist.)