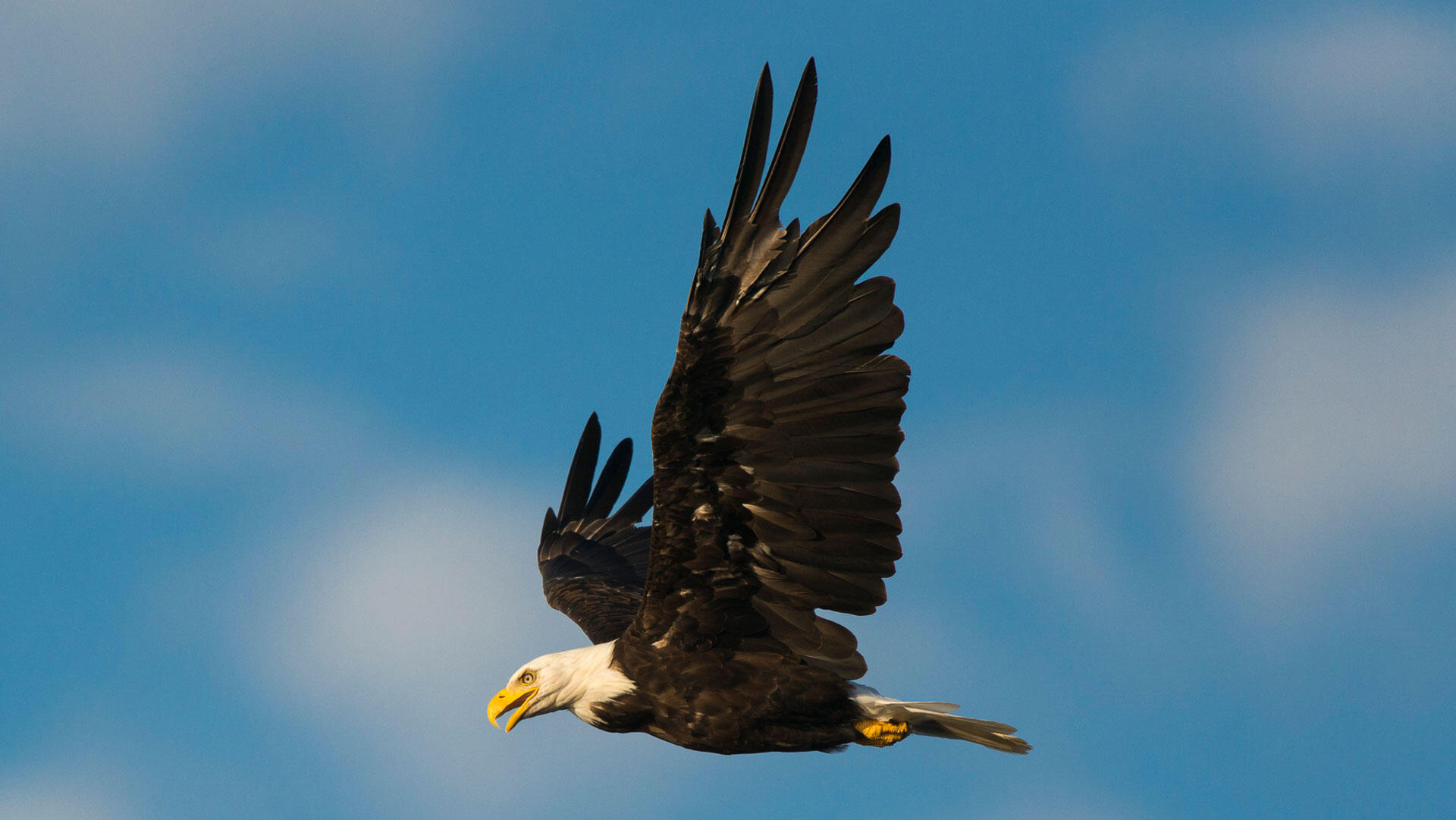 Birdist Rule #22: You Can Always Impress People by Showing Them a Bald Eagle

Finding these crowd-pleasers is a trick every birder should have in their back pocket.

I was hiking at a national park in Maryland the other day and pointed out a pair of Bald Eagles circling overhead to an older couple hiking nearby. They lost it. “My goodness, will you look at that!" they cried. "Incredible!” They were shaking their heads and giggling like they’d just opened the door to find Ed McMahon holding a giant Publisher’s Clearinghouse check. “Unbelievable!”

Bald Eagles are not nearly as uncommon in most parts of the United States as they used to be, thank goodness. In fact, in lots of places they’re downright common. And, being so big, they’re relatively easy to spot. But despite all that, if you show someone a Bald Eagle they’ll be your friend for life.

And you’ll get no snark or complaints from me. Bald Eagles rule. (Listen, all that stuff I’ve said about them before? That they sound dumb, and are “rank cowards”? I was kidding!) They’re huge, they’re beautiful, and they’ve got big, cool talons. They’re the national bird of America, for goodness’ sake! Plus, their comeback is one of the best wildlife success stories we’ve got. At the time of the Revolution there were as many as 100,000 Bald Eagles in America. But as recently as the 1960s, the species was pretty much extinct over large parts of the U.S.—in 1963 there were fewer than 1,000 in the country—thanks to us humans poisoning them with DDT, destroying their habitat, and sometimes even just shooting them. Now, after banning DDT and protecting the birds in other ways, we’re up to nearly 10,000 nesting pairs in the lower 48. It’s enough to make you take off your cap and sing the national anthem.

All birders know how much non-birders love Bald Eagles, because non-birders are always telling us. I said in a previous column that female Northern Cardinals are the birds we’re always being asked to identify, but Bald Eagles are the birds we’re always being told about. Everyone’s got a story about seeing one up by the camp they visited that summer. Everyone’s got a story about the time one flew over the highway they were driving on.

Birders, let’s give these people some more stories. Let’s find them a Bald Eagle. It’s easier than you think.

If you aren’t sure where there might be Bald Eagles nearby, try some online searching. Let’s start with eBird. If you don’t already know, eBird is the greatest tool for birders since the binocular. It’s a citizen-science database that allows birders to upload their sightings, and then lets anyone look at all the data. So, we can use eBird to tell us where Bald Eagles have been seen nearby: Go to www.ebird.org, then click the “Explore Data” tab, then hit the “Species Maps” section, and type in “Bald Eagle.” See that? It’s a map of all Bald Eagle sightings in the U.S. The red markers show recent sightings, so click on one near your house and see what it says. It’ll probably be near a freshwater river or lake, where Bald Eagles are most often seen looking for food. Go out to one of the locations where eagles have been seen recently, and look around. There’s no guarantee that you’ll see one right away, but at least you’ll know they’re around.

You could also try finding a known nest. Now, this is a sensitive topic, and there are lots of rules you must follow about keeping your distance and not disturbing anyone—please, please follow those rules!—but it can be done without harm if you’re cautious. Many times Bald Eagle nest sites are kept private, but other times they’re not, and these days a lot of nests will even have dedicated cameras set up so folks can watch the chicks grow up online. If you search the internet for nest cameras nearby you will have a good chance of finding a place where the parents will be flying around, bringing food to and from the nest.

If all else fails, and I hope it doesn’t, find a landfill. Yes. Open-pit landfills, the kind with tons of gross trash blowing in the wind and big bulldozers moving piles of garbage around, are Bald Eagle magnets. Young eagles, those in their first or second years of life, often use landfills as easy sources of food. Older birds aren’t seen at landfills as much—they're more skilled at hunting and can find better food elsewhere—but they sometimes chase after the gulls that also congregate there. Now, dealing with the stench and wind-blown garbage of an open-pit landfill might dampen the experience somewhat, but a Bald Eagle is still a Bald Eagle. Your friends will be just as impressed that you are able to bring them face to face with America’s national bird, and they’ll be sure to thank you. Just let them take a shower first.