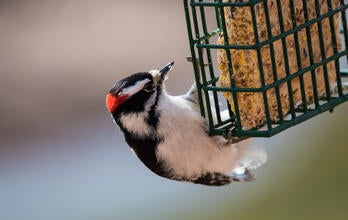 One of the first things that will happen to you once someone knows you’re a birder is that they’ll tell you they’ve got a weird bird out by their feeder. It’s brownish, they’ll say, and has a crest and some red on it. It looks like a cardinal, sort of, but they know what a cardinal looks like and this isn’t quite it but it does have some red on it…

Stop them. Stop them right there. Look them in the eye and with a firm but sympathetic voice explain, “It’s a female cardinal.”

The ability to identify a female Northern Cardinal is one of the most important first steps towards becoming a birder, because, for whatever reason, everyone asks. The same way your one friend with a pickup truck is always asked to help on moving day, you’ll be sent a constant stream of identification requests once your friends and family know you’re into birds. There’ll be emails with confusing descriptions, blurry photos of backyard feeders, and even audio clips recorded out an open bedroom window. The answer to the majority of these queries, I’ve found, is “female cardinal.”

It’s something all birders have to deal with, from your rank beginners to your Roger Tory Petersons. Heck, I have no evidence to back this up, but I bet John James Audubon himself had a special bin in his office where he’d toss all the female cardinal skins sent to him by amateur ornithologists thinking they’d found a new species.

There are a few reasons why the female cardinal question comes up so much. First, Northern Cardinals are common and conspicuous birds, east of the Rocky Mountains anyway. And second, they regularly show up at feeders, so they’re seen by a lot of casual birders. Plus, they’ve got an outsized role in popular culture, as namesake for several pro and college sports teams (even if they never get the bill color right).

Yet it’s always the flashy male getting the attention—even when it’s a women’s sports team. Despite their constant accompaniment of the males, despite the fact that they show up at the feeders just as much as the males do, the drabber female cardinals get no love.

So, how do you identify a female Northern cardinal? It’s easy. Structurally, they’re identical to their male counterparts, except that where males are bright red, females are mostly brown. If you see a bird that looks like a brown cardinal, and is hopping around the underbrush like a cardinal—except it's brown—and maybe hanging out with a bright red cardinal, you’re looking at a female cardinal.

To erase any doubt and ensure that you don’t mistake a female cardinal for some other brownish bird you may find in the backyard—a big sparrow or a mockingbird, say—here’s a foolproof tip: Look at the bill. Both sexes of Northern Cardinal have bright orange (not yellow!) bills, but while the bill blends in with the bright males, it stands out like Rudolph’s nose on the female. When you see that bright orange honker on a brown bird, you know instantly what you’ve got. You’re now prepared to answer any questions about what your aunt has at her feeder.

Beyond your friends’ and family’s birding needs, there are additional reasons to learn to identify female cardinals. Learning the difference between male and female cardinals opens the door to a host of other identification tricks that you can apply to other species. For example, sexual dimorphism, the scientific term for differences in appearance between males and females of a species, is common in birds (in the majority of all birds the males are brighter than the females). For example, if you see a bird that acts and sounds like an American goldfinch but is drab all over? It might be a female. Same goes for a host of warblers, towhees, ducks, orioles, and other birds. Once you get the hang of it, a number of mystery birds will seem incredibly obvious.

And one last reason to pay attention to female cardinals is their calls. Male and female cardinals call back and forth to each other almost constantly, using a distinctive sharp, metallic tick! Listen to it here. Once you start listening for that call you’ll start hearing it everywhere there are cardinals. Then you’ll start hearing it before you see the cardinals, and you’ll know that the mystery bird skulking in that bush is a cardinal. Once that happens, my friend, you’re ear-birding and have dipped your toe into the pool of advanced birding.

So there you have it—learn to identify a female cardinal and you’ll not only be able to answer the most common bird identification question coming your way but you’ll also start down the road of becoming a bona fide hardcore ear-birder. Good work!