Birders know spring migration as a kind of paradise, when the weather is finally warm and the birds are once again plentiful. But even paradise isn’t perfect. The bugs are back, for one thing. And unlike birds sitting in bare winter trees, spring migrants always seem to be hidden behind newly emerged leaves. It’s even harder to see the bright and beautiful patterns of migrant warblers, who spend most of their time flitting about treetops and only showing us their butts.

I’ve spent so much time looking up at bird butts that I should get an honorary degree in avian proctology. I’ve got enough underside photographs to start a smutty bird magazine called Rump Fancy or Tailfeathers. What I’m trying to say is, you should learn to identify warblers from below.

It’s possible to quickly identify some species of warbler just by glancing at their underside, but most others require some detective work. The trick for identifying warblers giving you a bad look is to not get frustrated, and instead try to use what you can see—body part by body part, clue by clue—to come to a final identification.

First, know the parts of the bird you are looking at when observing from below. Starting at the front and working back, birders can generally see the underside of the bill, the throat, the breast, the belly, the legs, the area between the legs called the “vent,” the grouping of feathers before the tail called the “undertail coverts,” and the undertail. Each of these areas can hold a clue to identification.

Let’s begin with the front of the bird: the bill, throat, and breast. Unless you're a Super Birder, I don’t think there are any warblers you can identify by underbill alone, though the Northern Parula comes close, with its bright yellow lower mandible. However, there are a ton of clues to be had on the throat and breast. There might be color! Or streaking!

Take note, and you could nail the identification right there. A bright orange throat is a slam-dunk Blackburnian Warbler. A necklace of black streaks on a yellow breast pretty well narrows things down to Canada or Magnolia Warbler. A big analog clock on the chest and a sideways ballcap means you’re looking up at 80s rapper Flavor Flav, and you should probably call TMZ.

The throat and chest can be useful, but only if you can see them. In my extensive experience at getting crummy looks at warblers from below, I’ve found that the front of the bird is often blocked by vegetation or simply held out of sight.

The throat and chest can be useful, but only if you can see them.

So let’s continue back to some more visible spots, the belly and the vent, where there are a few more identification clues. Most American warblers have either white bellies, yellow bellies, or a combination of those two colors, so this area isn’t always very helpful. But looking for other details can be. Black-throated Greens have some yellow patches just behind the legs. Cape Mays can show a yellowish vent. If you can see any streaking on the sides of the belly, you might have another clue to a Black-throated Green—or it could be a Yellow-throated Warbler, a Black-and-white, a Cerulean, a Blackpoll, a Cape May . . . you get the idea. For more clues, keep looking.

Continuing backward we reach the triangle of feathers just before the tail called the undertail coverts. A few warblers have unique undertail covert patterns. Black-and-white Warblers and Worm-eating Warblers both have small, arrow-shaped spots lining their coverts. The Worm-eating’s are buff-colored, but the Black-and-white is—you guessed it—black and white. (Worm-eating Warblers mostly stay close to the ground, so if you actually see one from below, you deserve a medal.) Painted Redstarts, should you be so lucky, have a more extensive, messier set of black-and-white splotches.

Undertail coverts are useful, but you should also consider the bird's tail—both its length and patterning. Warblers have a bunch of different undertail patterns: completely dark; dark tail base and tips with white in the middle; white tail with gray edges; white tail with black edges; and others. Some undertail patterns are diagnostic, such as the orange-and-black tail of the American Redstart, the yellow undertail of the Yellow Warbler, and the white tail base and black tip of the Magnolia Warbler. Others aren’t as clear from the undertail alone, but become identifiable once you include the undertail, coverts, and vent: the combination of yellow coverts, black tail base and white tail tip are a giveaway of a Palm Warbler, for example. In terms of length, a Hooded Warbler has a relatively long tail, while a Prothonotary has a shorter tail.

It’s a lot to keep track of (but isn’t everything about bird identification?), so here’s a little cheat sheet to help you remember which common warbler species you can identify from just the back half of their underside:

Other species will require additional study, so getting a good photograph helps immensely. With an image in hand you can compare to some of the excellent warbler resources out there, such as The Warbler Guide or the Peterson Field Guide to Warblers of North America, both of which have much more information on identifying warblers from below. If you’ve got a photo and you still can’t identify it, maybe just send it to me: I’m still looking for a centerfold for the May issue of Tailfeathers. 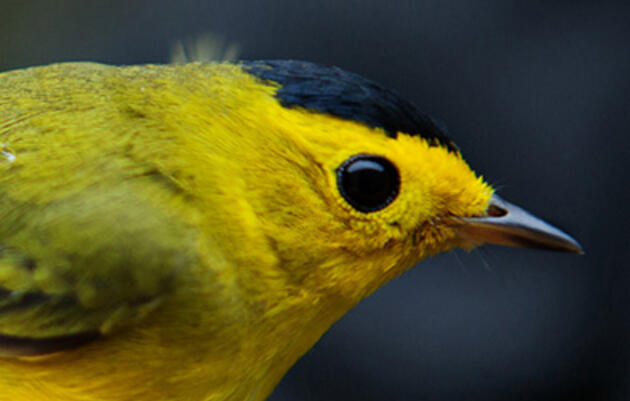 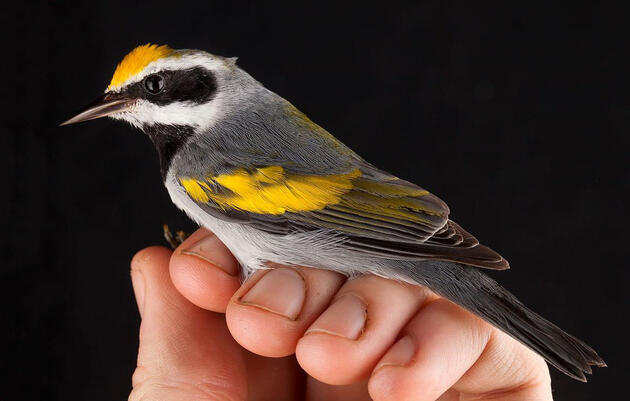 The Mystery of the Golden-winged Warbler's Decline Starts to Unravel

New research finds that the songbird's recovery might be stunted by habitat degradation where it overwinters. 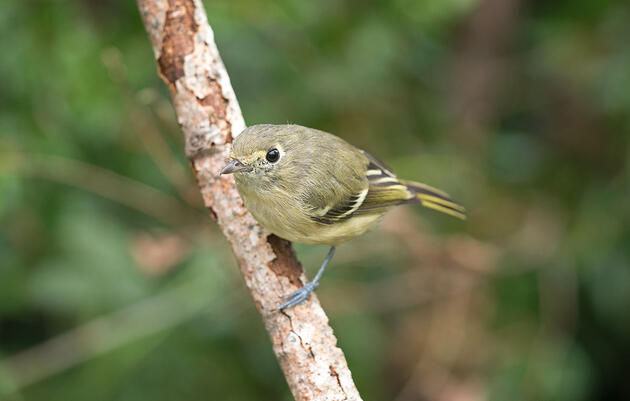 Before you start identifying vireos, you need to stop confusing them with other similar families of songbirds.