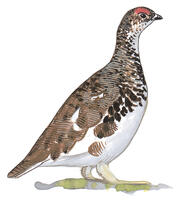 Sometimes the birds just aren’t there. Going after a particular bird and not seeing it is as fundamental to birding as binoculars and early mornings. In fact, missing a bird is so common that there’s even a bird-lingo term for it: dipping.

Like the term “twitching,” which means to chase after rare birds, “dipping” comes to us from the British, who use the phrase “dip out” when talking about having missed an opportunity. “Dipping” in reference to missing a bird dates at least as far back as 1980, when it was used in Bill Oddie’s classic Little Black Bird Book.

I dip all the time. Last spring a buddy and I were closely monitoring rare bird sightings in preparation for a birding trip to southern Florida. A bunch of good stuff had been showing up—Thick-billed Vireo, American Flamingo, and the first U.S. record of Cuban Vireo—and we prayed that they’d still be there for our visit.

One rare bird, a Zenaida Dove, had been seen in a particular park every day for months. It showed up at the same time each morning in the exact same spot. When the bird was seen the morning before our trip, we planned to swing by early the first day on our way to other spots. But when we showed up—at the right spot, in the right park, at the right time—there was no Zenaida. After looking around for a couple hours, we had to move on.

It wasn’t there the next morning, either, when we tried again. Same story a few days later. Altogether we spent something like 10 hours in the hot Florida sun, slowly staggering around the same section of dusty trail, but we never saw that bird.

We had dipped, and dipped hard.

Dipping can be heartbreaking, especially for new birders. Making a special trip for a particular bird takes a lot of effort: the travel, the waking up early, the research, the weird looks from your non-birding friends when you tell them where you’re going. To go through all that and come home empty-handed can make a birder wonder what they did wrong—or just what the heck it’s all worth.

It helps to remember that you’re not alone. All birders dip. I missed that Zenaida, and who knows when another one will show up in the U.S. I’ve dipped on “sure thing” Connecticut Warblers (twice), Black Noddies (twice), Thick-billed Vireo, White-tailed Ptarmigan, and others I’ve intentionally blocked from my memory.

Every longtime birder has their own tales of woe. A few months ago I talked to two birders, Doug Hitchcox and Justin Bosler, about chasing rare birds, and so I got back in touch and asked them about the ones they missed.

Doug recalls being so excited about reports of the first American-record Short-billed Elaenia that he spent his “last pennies” to fly from Maine to Chicago for the opportunity. The bird had been entertaining birders for six straight days, but Doug arrived on the seventh, and the bird (like Doug’s money) was gone. (Sidenote: that bird was never actually confirmed as a Short-billed and is now recorded as an Elaenia sp.)

Justin prefers to dip by car. One time he drove 10 hours from Baton Rouge, Louisiana to the lower Rio Grande Valley in Texas just to dip on a Social Flycatcher. He’s also dipped on the same bird on both coasts, missing Common Pochards in Vermont and California. Oof.

But birding legend Kenn Kaufman has us all beat. In his memoir Kingbird Highway, he recounts the time he hitchhiked for five days from Arizona to New Jersey to see what was initially reported as a Spotted Redshank—but what actually turned out to be just a Greater Yellowlegs with some oil on it. All the way across the country for a Greater Yellowlegs! I would probably walk into the marsh and never come back.

Dipping on a bird can be difficult, but there are ways to avoid the dreaded dip—and to cope if you do. Here are some tips.

Go soon. If you’re going to chase a bird, chase it as soon as you can. While talking to Kenn about dipping, he reiterated that “the most galling dips are when a bird sticks around for days or weeks and you FINALLY go to see it, and arrive just after it's seen for the last time.” Just like my Zenaida Dove! A rare bird doesn’t tell anyone its schedule, and your anxiety will keep rising the longer you wait. Go as soon as you can.

Make sure you’ve actually dipped. Birds move around—even “sure thing” birds that are always reported in a particular place—and you need to make sure you explore the area and talk to other birders before you give up. Last year I was bummed when I couldn’t find the Little Egret that had been hanging out in my old hometown in Maine, but I drove to one last vantage point before I left and, lo and behold, there was my bird. Use eBird, use local listservs, talk to other birders—do whatever you need to do to make sure you’re not just looking in the wrong place.

Look on the bright side. I know it’s small consolation, but it’s true that dipping builds birder character. At the very least you’ll have some good stories to tell: Both Doug and Justin had additional tales of long-distance dips. Dipping is also a critical step towards getting a nemesis bird. I have no doubt that the day I victoriously train my binoculars on some dumb wayward Zenaida Dove will be one of the sweetest of my life. Plus, no matter what happens you’re still out birding, and any day birding is better than a day stuck in the office.

Eat something unhealthy. This always works for me. Dipping on a rare bird is a great excuse for breaking my diet and just ripping into a plate of delicious and unhealthy food as a consolation prize. Options will vary regionally, but you’re always safe with ice cream or beer or both.

Look, your first dip can be tough. You’ll feel like you’ve wasted time, and you might even blame yourself for not being a good enough birder.  None of that is true. All of us dip, and the true measure of a developing birder is that you still go out after that next one.