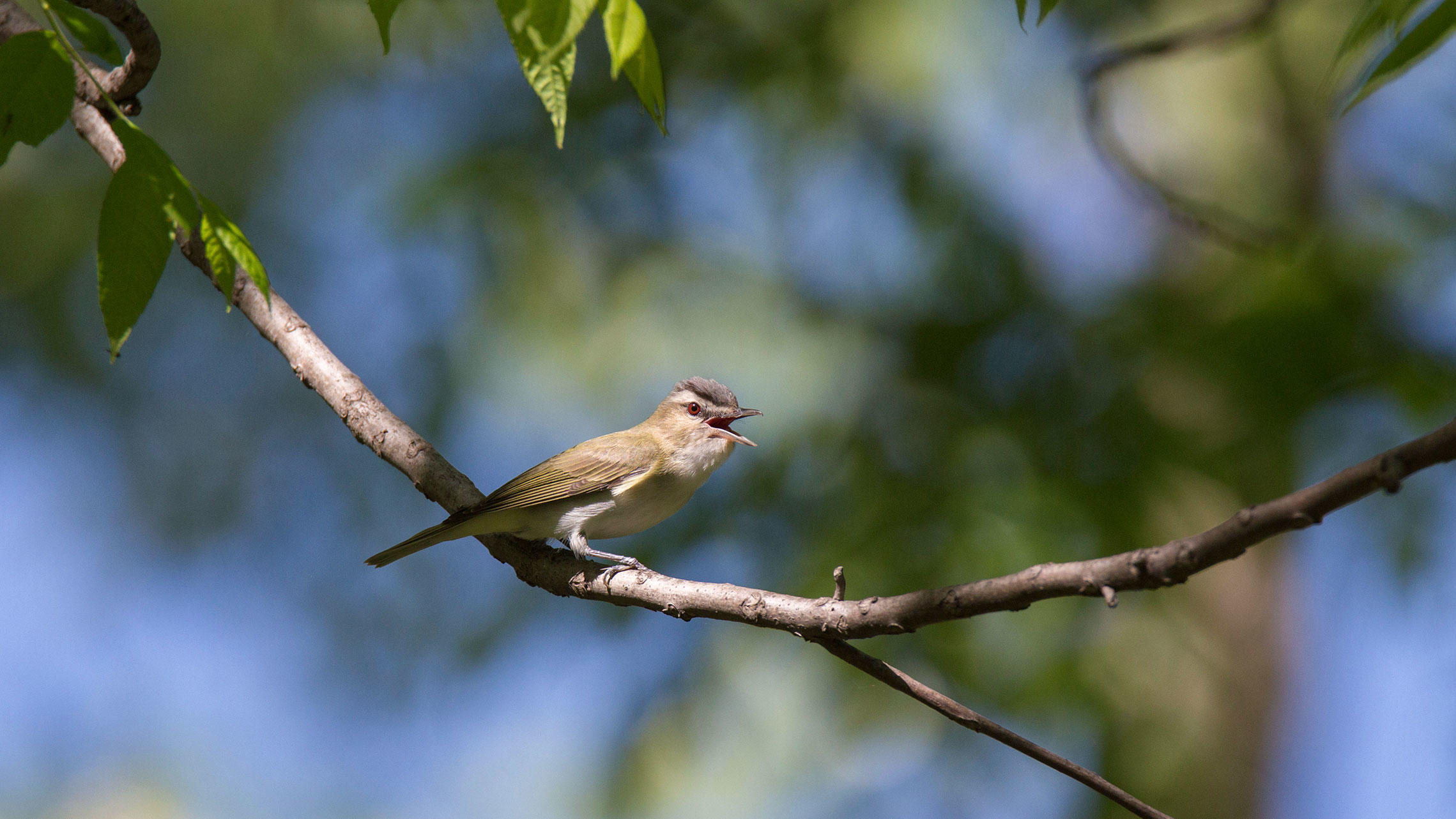 Once you've learned the Red-eyed Vireo's call, you'll realize that one is never far away—and that they never stop singing. Photo: Mircea Costina/Alamy

Spring migration can be a hectic time for a new birder. After a slow winter of studying gull backs and scanning the bay for rare ducks, the burst of migration can be overwhelming—suddenly there are birds in every tree and bush. You’re waking up earlier than you’d like to go birding, but it’s okay because your once restful mornings are being interrupted by loud, incessant birdsong.

But now it's mid-June, and migration is over. It’s time to take a breath, reflect on what you saw this spring, and appreciate the birds that have settled in for the summer. You now have the luxury of spending some extended time with the birds breeding nearby, so use this time to take your songbird identification skills up a notch, past the attention-hogging (with good reason!) warblers and onto a more nuanced but no-less-remarkable family: the vireos.

Warblers and vireos have a lot in common: They’re both small passerines—the term used to describe birds whose feet are designed for perching as opposed to, say, swimming or walking—that hunt for insects. Like many warblers, vireos generally feed high in tree canopies or in tangled thickets, making it harder to get a clear look. However, vireos are a bit more of a challenge to identify than warblers. Few vireos are as spectacularly colored as, say, a Blackburnian or Prothonotary Warbler. Differentiating between the 15 regularly occuring American vireos relies on details of eye stripes, “spectacles,” wing bars, and plumage color. Oh, and voice. Definitely voice. But we’ll get to that.

So, after warblers, vireos are sort of the next big step in songbird identification for the new birder. Thankfully, there’s one species that opens the door to the rest of the vireos. Actually, it doesn’t just open the door—it kicks the door open and tears it clean off the hinges. This is a bird that’s not only common throughout its large range, but it also most graciously and almost constantly makes its presence known through a repetitive and easily remembered song.

Whether you realized it, you most certainly heard this vireo ambassador if you did any spring-migration birding in the eastern two-thirds of the United States. It’s our friend, the Red-eyed Vireo.

Vireos are generally split into two types from an identification standpoint: those whose most prominent feature is a set of spectacles, or contrasting feathers around the eye, like in the Blue-headed Vireo; and those vireos whose most obvious field mark is a prominent line through the eye, like our Red-eyed or it’s rare southern cousin, the Black-whiskered Vireo. Red-eyed vireos breed throughout much of the United States, from Florida up through New England, and from east Texas up around the desert southwest and into Washington and Oregon (sorry, California, Arizona, Utah, and Nevada).

The Red-eyed Vireo has a white belly and a greenish back—better to blend in with the leaves in which it searches for insect prey—with a slate cap and two dark gray lines running from the bill through the eye and over the eyebrow, as if drawn with a heavy pencil. If you are lucky enough to get close, prolonged looks, the blood-red eye that gives this species its name is evident, but it’s by no means the best field mark. It’s pretty dark, and is very hard to see in anything but really good light. So, don’t stress on that part.

To be quite frank, it’s not the most exciting bird to look at. And that’s if you can even spy it up there in the canopy. But you don't need to see a Red-eyed Vireo to know it's there. That's because this species is one of the few that sings its song all day long.

No matter how hot it is, no matter how few other birds are singing, Red-eyed Vireos will still be at it. During the breeding season, from about April through July, they’ll start singing before dawn and can continue without stopping into the afternoon. They are often the only bird you'll hear singing, especially in the middle of the day.

This constant singing might be the Red-eyed Vireo’s most remarkable feature. It certainly made an impression on John James Audubon, who fondly wrote: “Now you hear its sweet, unaffected, musical, loud and free warble, from the inner top branches of a tall tree, for hours at a time, and even during the hottest part of the day; again, you may count each note that it utters, the little vocalist resting as it were to enjoy the sounds of its own music; next moment all seems hurry and bustle; it raises its voice, and chants on with great volubility, so loudly that one might think the little creature intent on drowning all other sounds.”

Believe me, you won’t miss the song. Learn it and a Red-eyed Vireo will never be that far away.

Thankfully, it’s an easy song to learn. Red-eyed Vireos repeatedly sing loud, clear phrases of two or three notes. Phonetic or mnemonic representation is popular, and many people seem to add their own lyrics to the Red-eyed song. Kenn Kaufman describes it on Audubon's free bird guide as sounding like the bird is repeatedly asking and answering its own question. In her famous 1899 work Birds Through an Opera-Glass, Francis Merriam explained that “in rhythm, it is something like he-ha-wha or ha-ha-wha, or, again ha-ha-whip in rising inflecting, and he-ha-whee in falling cadence.” In the 1903 book Color Key to North American Birds, Frank Chapman described the song as “a broken, rambling, recitative ‘you see it—you know it—do you hear me?—do you believe it?‘ ” And David Sibley described it in in his Guide to Birds as a “Song of simple, hurried, whistled phrases here-I-am, in-the-tree, look-up, at-the-top . . . ”

Whatever works for you to remember the song, do it, because you’ll need it when you want to learn the other vireos. Lots of other vireo songs are remembered by how they relate to the standard Red-eyed. Are the phrases sharper and more abrupt? You might be hearing a Black-whiskered. Is the song higher-pitched and a touch slower? Could be a Philadelphia Vireo. Same repeated phrasing but slower, slurrier, and usually two-noted? Might have a Yellow-throated Vireo there.

Yep, learn the Red-eyed Vireo and you’ve entered a whole new arena of advanced birding. The species is a generous teacher, giving you near-constant auditory lessons throughout spring and into the summer. Spring migration might be over, but the work of learning bird identification continues. Remember, it’s just a few short months before all those spring migrants—the tanagers, the grosbeaks, the warblers, Red-eyeds, and a whole bunch of other vireo species—might be passing back through your local patch as they head south. Be ready for them.

This is it! We’re here! Spring!

Identifying flycatchers can be unbelievably frustrating, so start off easy.