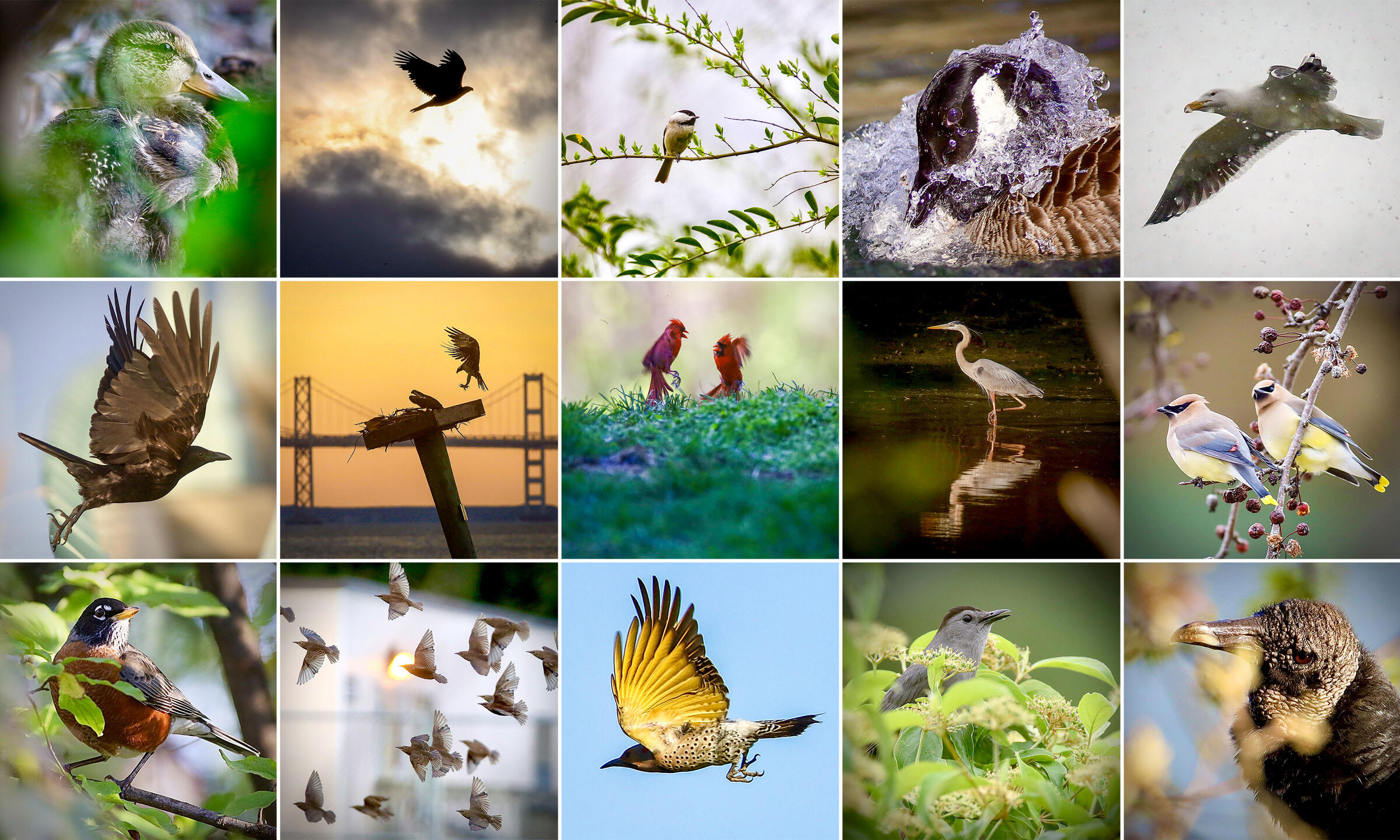 Birds Gave This Photojournalist Hope in the Wake of Tragedy

For Joshua McKerrow, posting daily bird photos has provided perspective and connection as he navigates trauma and grief.

The world seemed to be falling apart last March, but the Osprey was right on schedule. To Maryland-based photojournalist Joshua McKerrow, the sight of the fish-eating raptor returning to its nesting grounds along the Chesapeake Bay was a profound reminder that, even as a new virus caused chaos in the human world, nature was sticking to its usual rhythms.

The pandemic came during an especially difficult chapter of McKerrow’s life. In June 2018, a gunman stormed the office of the Capital Gazette—the newspaper in Annapolis where McKerrow had worked for nearly 20 years—and murdered five of his friends and colleagues. McKerrow, who was out celebrating his daughter’s birthday at the time, drove back to the newsroom to help document the horrific scene and put out the next morning's paper covering the attack.

In recognition of their bravery and dedication, McKerrow and his colleagues earned a Pulitzer Prize Special Citation. They were also among the group of journalists named Time magazine’s Person of the Year in 2018. But the accolades didn’t shield McKerrow from the trauma of that day, or from the cutbacks and consolidations plaguing local journalism.

In February 2020, the newspaper’s parent company, Tribune Publishing, offered McKerrow a buyout. Still coping with the newsroom tragedy, he didn’t know how much more of himself he could give to the job. McKerrow made the difficult decision to take the offer.

Soon after, McKerrow’s mother died of pancreatic cancer. “Then, like two weeks later, COVID hit,” he says. “I didn’t have my job anymore, my mom was gone, and I was taking care of my dad.”

And then, the Osprey arrived.

McKerrow, a single father, was out biking with his three children when he looked up and saw the huge bird perched on a metal tower. “He was chowin’ down on a fish and I just got super excited,” he says. “It kind of felt like a sign, you know, that right now there’s life happening, there are other things going on, and all of these things that are happening to us are little details in this huge complicated mosaic.”

McKerrow’s photojournalist instincts kicked in. He lifted his camera and captured the moment. Later that day, he posted the photo on social media. The following day he took photos of an American Robin looking for worms in the yard and two Downy Woodpeckers in a tree, and shared those, too. The next birds to catch his eye were a House Sparrow and a Mourning Dove. He tweeted the photos with the simple caption, “Today’s birds.” He noticed that people seemed to enjoy the photos, so he kept sharing fresh pictures on social media every morning.

“Within a week or two, people were sending me messages saying, ‘Thank you for doing this, I look forward to this every day.’” McKerrow says. And to his surprise, the messages weren’t just coming from his friends—they were coming from people he had never met.

This past January, McKerrow launched a Patreon fundraising page for his “Today’s Life” multimedia project. With the help of his supporters, McKerrow is planning to continue the project indefinitely, and even expand it by collaborating with other photographers and artists.

What began as a way to process his own grief soon became a way for him to connect with others during a time of relative isolation. One of the people who reached out was Jennifer Sheehan, a journalist with The Morning Call in Allentown, Pennsylvania. Sheehan and her husband started feeding birds in their backyard as a way to pass the time during lockdown, around the time McKerrow started posting his photos. Though she and McKerrow have never met, Sheehan developed the habit of retweeting his photos with words of appreciation.

“I retweet them every day because I want people to not only see Josh’s work but also to share in the beauty of the birds he captures so perfectly,” Meehan says. “Much of my feed for the last year has been the virus, what our president was doing or saying, and other dark or difficult news. Seeing Josh’s beautiful bird photos was and continues to be the highlight of my day.”

The project has also helped McKerrow reconnect with one of his longtime family friends, James Gunsalus. Gunsalus spent many years birding on the East Coast before moving out to California, so he started sending McKerrow ID tips when he began posting photos of eastern birds. “Initially when he was posting, a lot of times it was just, ‘Hey, here’s a bird!’” Gunsalus says with a laugh. “I really wanted to advocate for this for him.” He even sent his friend a copy of The Sibley Guide to Birds.

As a photojournalist, McKerrow sought to show the humanity of his subjects. As a bird photographer, he applies the same sensibility, focused on revealing something of each bird’s personality as it goes about its morning. “I try to use my portrait skills,” he says. “I try to make it that bird in that moment that morning.”

“He’s started to get to the point where he knows these birds,” Gunsalus says. “Storytelling is what he does, and this provides him a good platform for it.”

Not previously an early riser, McKerrow has found that being up to catch every sunrise is the only sure way to maintain his routine of posting new photos of birds each morning. This, in turn, has made him more attuned to the ebb and flow of the day, and the changing of the seasons. “Intellectually I knew the location of the sunrise changes from season to season, but now I actually see it,” he says.

Rearranging his schedule around each day’s birds has been worth it. “It looks like I’ll never get to sleep late again, but that’s a small price to pay,” he says. “It’s kind of saved my life.”