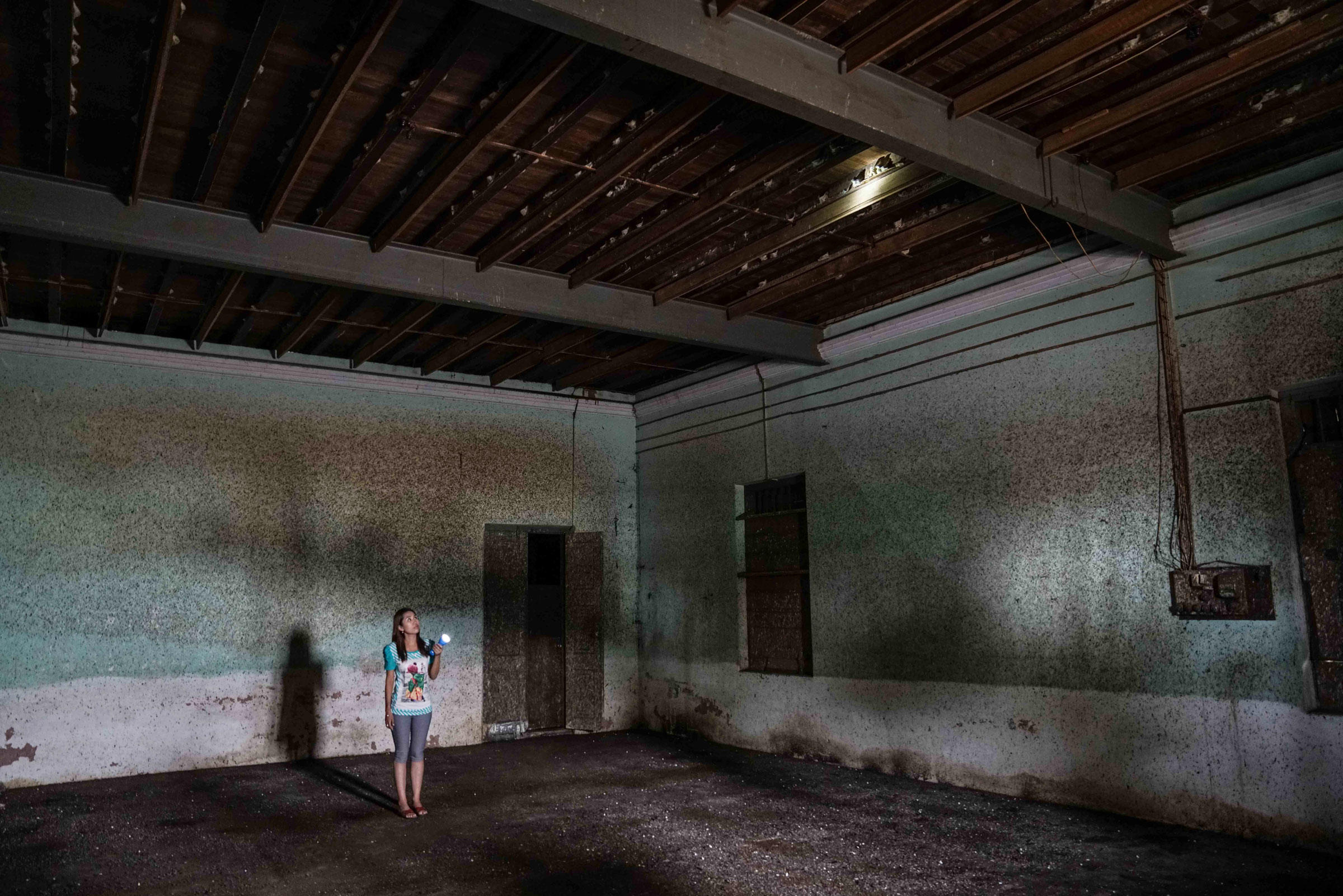 A staff member at the Ziwasoe nesting house in Myeik, Myanmar, checks in on Edible-nest Swiftlets tucked in for the night. “Hotels” like these are the latest phase of Asia’s giant bird’s nest soup business. Photo: Aung Naing Soe

A bowl of clear, gelatinous bird spit sits on the kitchen table of a modest house in Myeik, Myanmar. The host, Sofia, pours the mixture into a pot, adds a dash of sugar and a pinch of powdered, strawberry-flavored cream, and flips on the burner. After a few stirs, dessert is served.

The concoction tastes like a sweet, watery pudding, but flavor isn’t the point, Sofia says. The soup allegedly helps with a wide array of ailments, from clearing phlegm, to improving kidney function, to heightening sex drive. After a few spoonfuls, Sofia and her husband Ba Ka lead the way upstairs to their built-in nest factory.

The second story of the couple’s coastal home once served as their bedroom. These days, however, it belongs entirely to the Edible-nest Swiftlets, the Old World counterparts of Vaux’s and Chimney Swifts. Dozens of the gray, half-ounce birds dart through a window in the back, screeching and clicking as they swirl around the rafters. The floor is covered in a thin layer of guano that makes the room smell like a chicken coop. Ba Ka shines a flashlight at the ceiling, illuminating neat rows of cup-like structures pasted to the beams. The nests are made of swiftlet saliva, excreted from glands just inside the birds’ beaks.

For Sofia and Ba Ka, this crude setup brings in big business. They harvest the nests four times a year, allowing chicks enough time to fledge while also generating more than three pounds of material for bird's nest soup each quarter. In a country where the minimum annual wage doesn’t quite reach $800, harboring swiftlets can amount to a hefty chunk of income: about $6,000 in Sofia and Ba Ka’s case. “We started farming bird’s nests because we knew it could help us live worry-free in retirement,” Sofia says. The arrangement has its perks for the swiftlets as well: The house represents a safe and predictable place to rear chicks, far out of reach from rats, snakes, and other hungry animals. Still, as more families across Southeast Asia take up swiftlet farming, it's unclear if this new industry is helping or hurting birds in the wild.

he human appetite for bird’s nest soup dates back to at least the 1500s, when it was served as a high-end healing tonic to Chinese elites. Collectors would scale rickety bamboo scaffolding to scrape the ingredients off cliff ledges and cave faces—a practice that’s still prevalent throughout the species Asiatic range, despite its harmful impact on the birds. People often can’t see into a nest before plucking it from the wall, meaning eggs and young swiftlets don’t always survive.

At the same time, vast numbers of swiftlets in Myanmar, Indonesia, Vietnam, and other parts of the region are moving in with their vendors. In Malaysia alone, the number of swiftlet houses increased from 900 in 1998 to about 60,000 in 2013. The rapid transition over the past two decades has been a boon to farmers, restaurants, and foodies. Nest sales have risen to an estimated $5 billion a year, and a bowl of soup can now fetch up to $100 in Hong Kong. All the while, demand among the middle class is exploding.

The earliest reports of house-broken swiftlets come from Java in the 1800s, when a few birds haphazardly glued their nests onto outhouses and culverts. Today, the evening skies of cities like Myeik are filled with swarms of Edible-nest Swiftlets and their staccato mating calls. Much of the frenzied noise comes from loudspeakers hung in the windows of house farms—a luring tactic that was developed in the latter parts of the 20th century. It’s now used almost universally, along with the cavernous, fortress-like buildings (built specifically to attract swiftlets) that dot skylines from southern Myanmar to Indonesia.

The evolving human-swiftlet partnership has both surprised and concerned Gathorne Gathorne-Hardy, also known by his formal title, the Fifth Earl of Cranbrook. The British biologist began studying Edible-nest Swiftlets as a young postgraduate in Malaysia in 1956, where he conducted a series of experiments to confirm the birds’ use of echolocation in nesting caves. He then turned his attention to investigating their insect-heavy diets and general survival habits.

More recently, Lord Cranbrook has been charting the progress and impacts of swiftlet-nest factories. “These birds are now as domesticated as bees,” he says. “They’re being provided with these specialized hives by people, and what they’re producing is being harvested.” But it’s the swiftlets themselves that jump-started the process. Humans, he points out, have simply responded.

hree years ago, in a small fishing boat a half mile off the coast of western Malaysia, Saul Mallinson snapped on a lifejacket and jumped overboard. After 60 feet of of hard swimming, he pulled himself onto a jut of limestone, cutting his hands and feet on the razor-edged clams in the rock. A government report from the 1980s had listed this remote outcropping as a swiftlet-nesting site. But Mallinson, who was working for Lord Cranbrook before attending the University of Edinburgh, only found seashells and snakes. “There weren’t even signs of nests,” Mallinson says. “I don’t think there had been nests there for years.” His theory is that passing fishermen had taken them all down years ago.

For nine weeks in 2014, Mallinson and a partner trekked through the Malaysian state of Sarawak to check the current statuses of old swiftlet caves. Some were depleted; others were completely empty. Only the ones guarded by territorial harvesters still had substantial populations left.

To Lord Cranbrook, the findings were discouraging, but they justified the need for protections around the Edible-nest Swiftlet. The International Union for Conservation of Nature classifies the species as widespread and of “least concern.” That’s a mistake, Lord Cranbrook says. The birds have faced serious declines in pockets of their range. In the Andaman and Nicobar Islands in the Bay of Bengal, stress from harvesting decimated the local population by as much as 80 percent by the early 2000s. In Niah Cave, a major tourist attraction in Malaysia, the species was pushed to the brink by nest collectors. Similarly, a related bird, the Indian Swiftlet, has also seen its populations reduced along the southwest coast of India.

These downward spirals began well before the advent of nest farming, but Lord Cranbrook believes the recent craze is only loading more pressure on wild colonies. The expansion of domestication has broadened consumer appeal and access to nests, he says. What’s more, it’s pushed up demands for cave-fresh ingredients, which some claim are higher quality than the home-raised variety. “All this house farming has not saved the wild population, and it’s not going to,” Lord Cranbrook says. 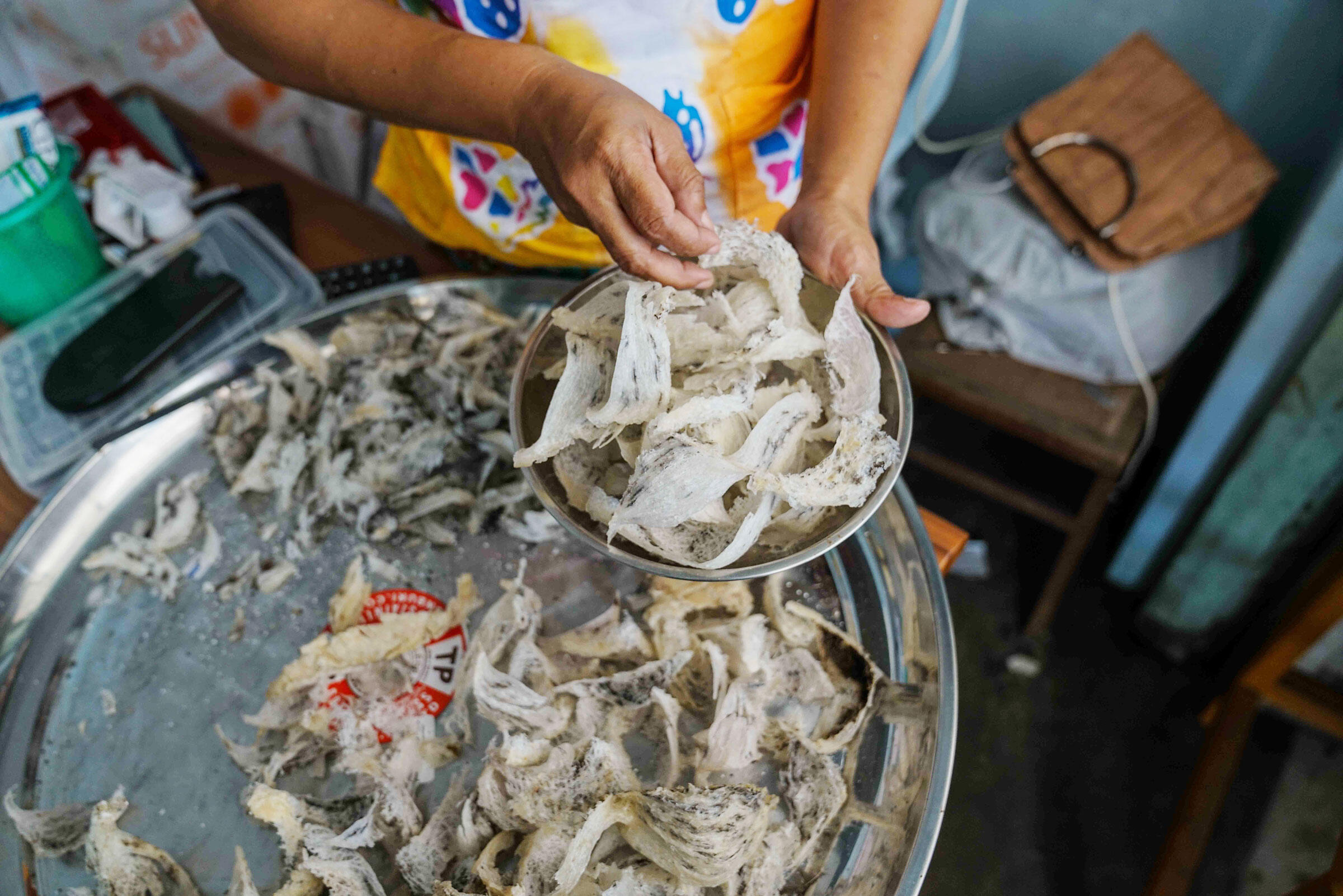 Dried nests at the Myeik market. The going price can be as high as $80 an ounce. Photo: Aung Naing Soe

The result is a conflicted relationship between farming and swiftlets. On the one hand, it can be argued that the industry has benefited the birds in terms of survival and range expansion. There’s evidence that house-farmed individuals have been able to colonize new areas in Vietnam, Cambodia, and elsewhere. But the rise of the “swiftlet hotels” and their winged patrons is creating a number of unanswered questions. Experts like Lord Cranbrook speculate that the increase in urban swiftlets could cause imbalances in insects that many other birds need for food. They also haven’t seen any evidence of house-nesting individuals returning to caves, which means the gains may not be spilling over to wild populations.

Currently, Lord Cranbrook and scientists at several Malaysian universities are sifting through the genetics of domesticated swiftlets in hopes of tracing their ancestry. Thus far, their research shows that house-farmed individuals in Malaysia are distinct from nearby wild populations. This reinforces Cranbrook’s belief that domesticated and wild birds should be treated differently when it comes to their conservation status.

There's an economic incentive in decoding the species' genome, too. For example, entrepreneurs could selectively breed birds that build large nests, or create custom medicines that combat avian disease. With this leverage, swiftlet advocates are looking to convince the industry that protecting wild nests—and the integrity of the entire species—is beneficial to all.

It’s an honest selling point, so long as the lives of swiftlets and humans remain intertwined. Back in Myeik, in the market down the street from Sofia and Ba Ka’s house, a merchant sits behind a case full of silver jewelry, holding a basket of bird’s nests on her lap. Using a pair of tweezers, she cleans each nest by removing the thin, dark feathers woven into the strands of saliva. She just started farming swiftlets in her house three months ago, and already “business is booming,” she says. She’s grateful for the extra income; and she doesn’t mind living next to the birds, either.

Scientists have found that the birds can stay in the air for 10 months straight. That is a very long time.

The Burning Man of Birding: Inside Iceland's Puffin Festival

For decades Icelanders have celebrated the Atlantic Puffin even while they've served it up on plates. But some traditions can't last forever.

The Common Swift Is No Longer the Fastest-Flying Animal

And here's a surprise: It wasn't even dethroned by another bird.