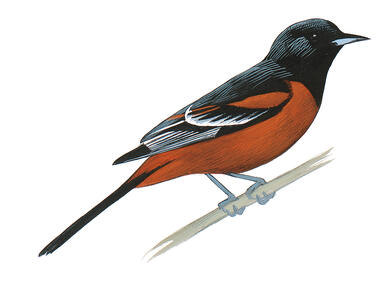 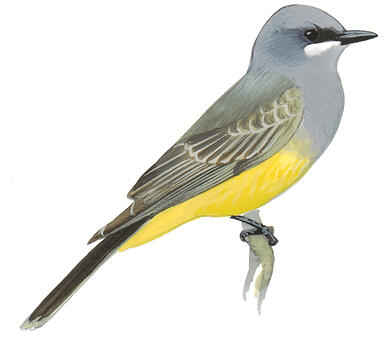 Once upon a time in the United States, the Orchard Oriole could be found just about anywhere east of the Rocky Mountains. But a keen birder might have noticed that over the last few decades, they’ve become scarcer in the southern part of the country, but more abundant up north. That’s because the oriole needs a particular habitat—open spaces with groves of trees—and thanks to climate change, some of its preferred spots are becoming unlivable. (Check out this graphic from the Audubon Birds & Climate Change Report for more specifics.) The problem isn’t just unique to this species either. Several decades ago, the Cassin's Kingbird was basking in the warm Arizona sun, but now it’s getting too hot and dry in the state. Instead, cooler areas farther north, such as Colorado and Wyoming, are becoming its home base.

To Durham University ecologist Phillip Stephens, this relocation doesn't come as a surprise. Together with a group of researchers from the Royal Society for the Protection of Birds and the U.S. Geological Survey, Stephens crunched nearly half a century's worth of occurrence data for 145 terrestrial bird species native to Europe and 380 species native to the United States. That data came by way of thousands of citizen scientists who submitted their observations to the Pan-European Common Birds Monitoring Scheme and the North American Breeding Bird Survey. By comparing the birds' breeding ranges with climate data, Stephens and his colleagues were able to identify the preferred habitat for each species. Their results were published yesterday in Science.

"We used that information to generate a prior expectation for whether the species would have been advantaged or disadvantaged by climate change," says Stephens. Those predictions were then weighed against actual bird abundance data from 1980 through 2010. In the end, the well-guided hunches held up against reality: The populations expected to lose suitable habitat declined, while those expected to find their habitats improve increased. While it's not exactly news that global warming has led birds to shift their ranges, this study takes a broader look at continent-wide trends.

Indeed, similar patterns were seen for European and North American birds, despite the thousands of miles of ocean separating the two continents. "The extreme similarities are quite unusual in a study of this scale," says Stephens. And no other variable, like body size or migratory behavior, was able to explain the divergence between the birds' responses. The only factor that could explain the increasing abundance of some species and the decreasing populations of others was the variation in climate conditions within their ranges. "Recent climate change has already favored one set of species over another," Stephens says.

For Audubon’s Director of Conservation Science Chad Wilsey, this study provides important evidence that bird abundance is directly related to changes in climate—even among very different species on different continents. "Since 1980, this has resulted in more good than harm," he says. In other words, thus far, more species have benefited than suffered from climate change. Of course, the story isn't over yet, and global warming continues to accelerate. "Now that we know [how] species are responding to climate change, the question remains at which point this [overall] response will become negative."

This particular study isn't designed to generate predictions for the future, and Stephens is loath to do so. "Just because the climate has been getting better for 'Species A' over recent decades, doesn't mean it will continue to get better over the coming decades," he says. Still, the study demonstrates that climate change is having "detectable, pronounced" impacts on wildlife "in a way that policymakers can easily grasp," and that those impacts are leading to major ecological upheavals. Once politicians realize that scientists can provide tangible numbers on the past effects of climate change, they might be encouraged to uphold—or improve upon—the commitments made last year at COP21 in Paris. Just last night, the United States and China announced that they will officially sign the accord later this month.