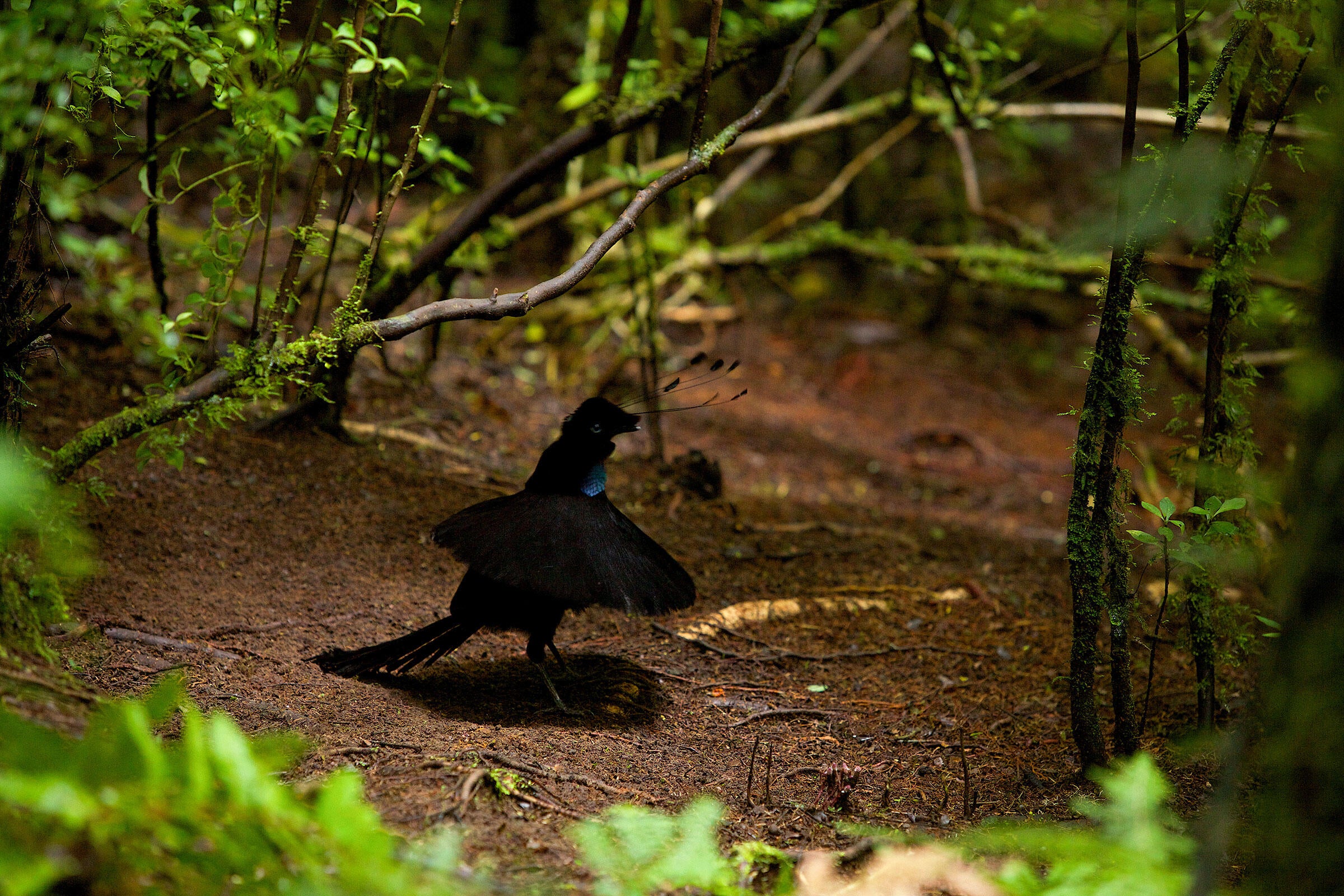 A male Wahnes's Parotia in action in Papua New Guinea. The super-black feathers down its front help offset the iridescent patch on its throat. Photo: Tim Laman/National Geographic Creative/Alamy

If there’s one word in the English dictionary that best describes the birds-of-paradise, it’s “extra.” These south Pacific babies can twerk, step, and do inexplicable things with their bodies. Heck, they can even throw David Attenborough off his game.

So, it’s no surprise when another bizarre trait turns up in the flamboyant family. Last month, scientists from Harvard, Yale, and the Smithsonian Institution revealed that some birds-of-paradise feathers have nuanced structures that trap the tiniest iotas of light, essentially turning them into black holes. The findings were published in Nature Communications.

The newly discovered effect is similar to vantablack, a man-made coating that’s vaunted as the darkest substance in the world. The carbon-based material, which looks velvety but is slick to the touch, has been used on satellites, the International Space Station, and a five-figure watch.

For humans, a more intense, matte shade of black offers a stealthy advantage, especially when used on military equipment. But for the birds-of-paradise, it’s another showpiece in their over-the-top wardrobes. “They display their super-black feathers most prominently during courtship,” says Dakota McCoy, an evolutionary biologist at Harvard and the lead author of the study. “But when they’re just going about their business, the feathers are tucked away.”

McCoy and her collaborators Teresa Feo, Todd Harvey, and Richard Prum compared super-black feathers from six birds-of-paradise species with normal black feathers from the Paradise-crow and Lesser Melampitta. The scientists plucked samples from preserved museum skins, coated them in gold dust, and probed them under an ultra-revealing microscope. Right away, McCoy noticed that the dust on the super-black surfaces disappeared from view.

After zooming in further, the crew found that the matte plumes were made up of jagged barbules. Typically, these microstructures project straight out from the shaft, allowing light to hit them and bounce off. But scans from the six birds-of-paradise showed a messier surface, almost like feathers within a feather. This, McCoy says, leaves more places for the light to strike—and immediately be absorbed.

But why would a bird that's basically a walking neon bar sign want to suck all the light out the room? To shine even brighter, of course. By setting a shock of blue against a sea of super black, male birds trick their spectators into thinking their feathers are intensely saturated. (In fact, the Superb Bird-of-paradise doesn’t have any super black on its back because there’s no glittery hardware to complement.) It’s a play on color correction—a trait that most vertebrates, including humans, have. When we look at an object, our brain uses the surrounding light to calibrate its true hue. That way, when we see something in full sun, it’s not washed out. And vice versa in shade. In the birds’ case, the feathers hide so much light that the brain overcompensates, leaving us with a glowing, otherworldly view.

The female bird-of-paradise gets the best view, however. As the male dances around her, he positions his body to catch glimmers of forest light. It looks romantic (or tiring, depending on your tastes), but his primary goal is to show off his flattering side. To pull that off, he needs his girlfriend to watch him head on while he finds the perfect angle. It takes some finagling and precise geometry, McCoy says: She and her crew had to run multiple simulations before they landed on the right angle, too. After testing the reflectance from super-black feathers in a variety of setups, they concluded that max absorption happens at -45 degrees.

That’s not to say that birds are Mathletes. Rather, we should see them as masters of light, commanding the electromagnetic waves to play to a female’s shrewd eye for quality—and our innate love of opulence. (Butterflies and snakes can also create the super-black illusion with their scales.) But with great power comes deceit: McCoy says males might cheat the system by enhancing feather color through structural traits, instead of gathering pigments through berries and other resources. “Men are using all sorts of ways to look better without spending the energy,” she says. This could be true across the birds-of-paradise, or in avian groups like tanagers (her current research targets).

While this is the first known case of super-black birds, McCoy believes there may be tons of examples out there. And there’s still the mystery of how the birds-of-paradise got to be their glamorous selves. Part of it’s definitely genetic, but part of it may rely on the environment, Yukikazu Takeoka, a professor at Nagoya University in Japan, who studies the brilliant blue of Steller’s Jays, says. “It’s the so-called chemistry and physics [of the feather] that act to create its structure.” Pair that with nature's will to defy reality, and you've got yourself a bird-of-paradise.