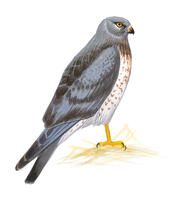 For Elizabeth Hargrave, it doesn’t get much better than gathering around a table with her husband and their friends to play board games. But at one such get-together in 2014, a question began to nag at her: Why did it seem like all the games were about Mediterranean traders, medieval castles, or galactic conquest?

Hargrave and her husband loved nature, and had recently started birding. All their friends were similarly outdoorsy. “Why,” she posed to the group, “are there no games about things we are into?” That conversation led Hargrave, a health policy consultant in Maryland, to a realization: She should make one.

Now, her debut board game Wingspan is one of the industry’s hottest titles for 2019 and is netting rave reviews. “It's been a long time in the making, and it's just mind-blowing to see pictures of this game being played all over the world,” Hargrave says.

Wingspan players take on the role of bird enthusiasts aiming to attract avian visitors to their wildlife preserve. The heart of the game is its deck of 170 illustrated bird cards, each depicting a North American species. Up to five players take turns placing these cards into their appropriate habitat, collecting food, laying eggs, or drawing new cards, with each action unlocking new resources. It’s what’s known in board game parlance as an engine-building game—one in which players try to create an increasingly effective system for generating points. The game lasts about an hour, and the player with the most points wins.

Birds are the stars of Wingspan. Every aspect of the game’s strategy and scoring draws on their real-world behaviors and traits, such as diet, preferred habitat, and nest shape, which she gleaned from Audubon's field guide, the Cornell Lab of Ornithology, and other sources. Brown-headed Cowbirds can boost a player’s score by adding eggs to other birds’ nests, just like they do in the wild. Northern Harriers and Barred Owls can earn points by preying on smaller birds. And Horned Larks in Wingspan can form point-producing flocks, as the real birds do in winter.

The game’s confluence of theme and play mechanics caught the attention of Jamey Stegmaier, co-founder and president of Wingspan publisher Stonemaier Games, when Hargrave pitched it in 2016. “I knew within a few minutes that Elizabeth had something special,” he said in an email. “There’s something about birds that instantly captures a human desire to collect, sort, and admire.”

Stegmaier honored Hargrave’s commitment to accuracy by commissioning artists Natalia Rojas and Ana Maria Martinez Jaramillo to do original bird illustrations, a bright collection of lifelike colored-pencil works. Their art is the first thing most buyers will see. On the Wingspan box is a Scissor-tailed Flycatcher, wings outstretched in a dramatic X shape, its white and salmon-pink plumage jumping off the blue background. It’s an eye-catching contrast to the gloomy dungeons, futuristic warriors, and historical peasants of many popular board games.

Those types of titles and themes have pushed the hobby’s popularity higher in the past decade; U.S. sales reached $1.1 billion in 2017, up 7 percent from the year before, Bloomberg reported. The hexagonal terrain tiles of the blockbuster game “Catan” might be the most widely known, but Stegmaier says other games are showing up in pop culture. “Western Legends” made a cameo on an episode of “South Park,” and Stonemaier’s megahit “Scythe” popped up on the BBC’s “Orphan Black.”

Birds are still a niche theme across the board game landscape.

Birds are still a niche theme across the board game landscape, says Alec Nelson, who maintains a list of avian tabletop titles. He says such games are often quick, casual affairs, where the bird theme is superficial and “a bit pasted on.”

That’s why Hargrave’s game is “somewhat unprecedented,” according to Nelson, a graduate student in conservation biology at the University of Georgia. “What you’re doing in Wingspan with these bird cards is really centered around what the actual species in the wild does. And as a byproduct,” he adds, “you actually learn something about these species.”

Drawn though Stegmaier was to Wingspan, he admits he was a little concerned about how hobby gamers would respond to a bird-themed title. Out of caution, his company ordered 10,000 copies of the game for its initial printing, half its typical first run.

They blew through them. More than half sold during a six-day preorder period in January, and distributors scooped up the rest, Stegmaier says. The game is effectively sold out until March 8, when small retailers will begin to sell their copies. (You can find a list of them here). Direct online orders should resume in April. Stegmaier, meanwhile, is already discussing future Wingspan products in the game’s Facebook group, possibly including expansion packs with birds from other continents.

Hargrave says the gaming world’s embrace of her creation is “beyond anything I had dared hope for." She finds particular joy in online comments that suggest the game could be a gateway between birding and board-gaming. Indeed, for those who have never donned a pair of binoculars and given the pastime a shot, a few wintry months of playing Wingspan and poring over its lifelike illustrations could prove the perfect primer for when spring migration heats up.

Freebie Alert! Download the Audubon Bird Guide app to quiz yourself on the songs and behavior of more than 800 North American species.