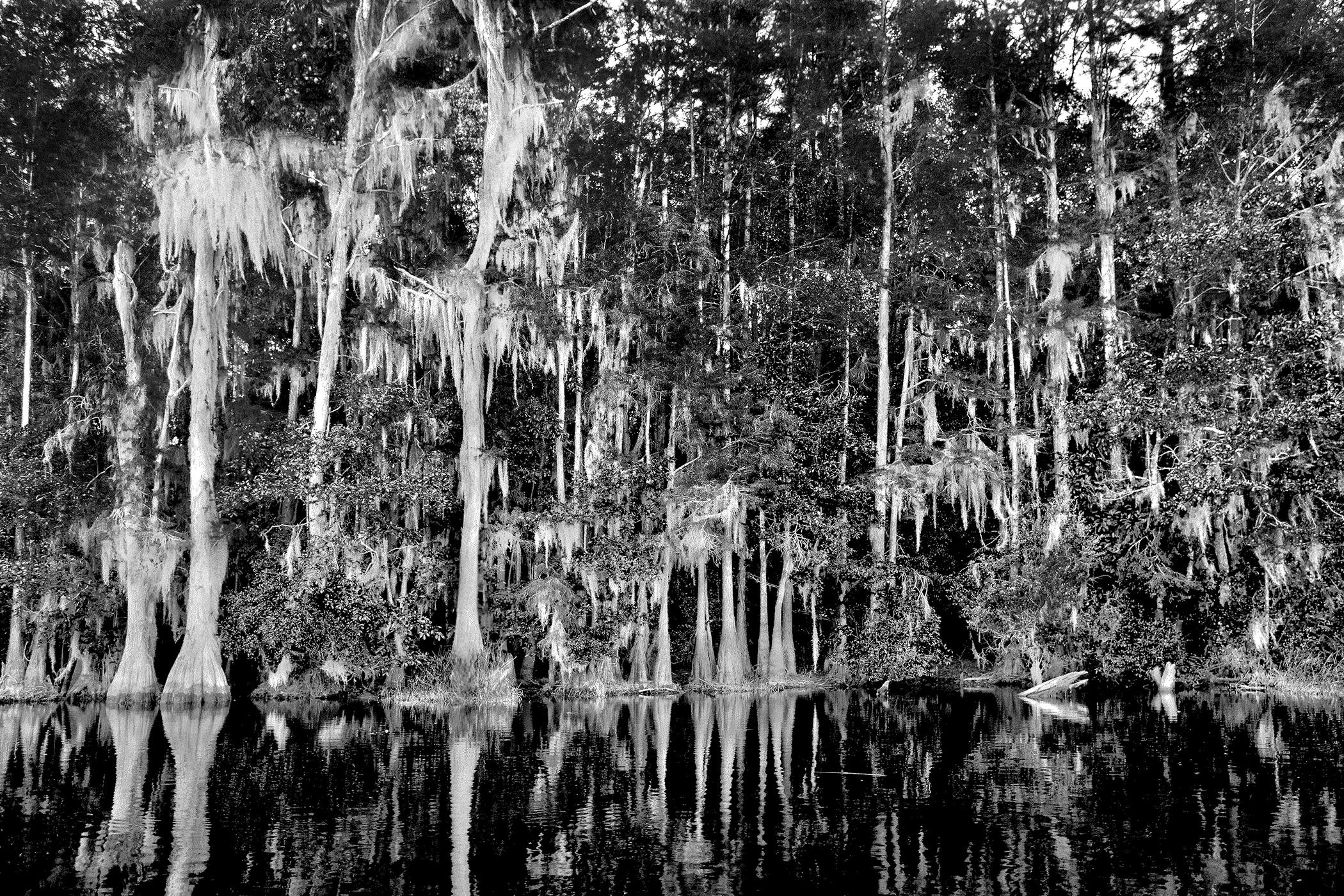 Swamps often get the short end of the stick. In addition to their—let’s face it—unappealing name, they’re also seriously threatened. A complex mix of human development, agricultural pollution, and climate change have driven these coastal  wetlands (including both swamps and marshes) to nearly disappear. In fact, about half of the United States’ original wetland habitat has slipped away over the past two centuries. In Louisiana, for example, it’s vanishing at the rate of almost 30 square miles every year.

With her new series Fractured Botanicals, photographer Alexandra Penney shows how swamps can be beautiful. In more than 100 photos, Penney highlights the subtle tranquility of these woody wetlands. As she photographed, Penney discovered that swamps are also impeccable water drainage systems, home to countless birds and other animals, and in desperate need of a helping hand.

Audubon caught up with Penney to delve deeper into her haunting images.

Audubon: Did you grow up around swamplands?

Alexandra Penney: I’m actually from Boston—I grew up partially there and partially in Connecticut. I was surfing the net in the car one day and I saw a picture of cypress swamps. So I drove down to the swamps in South Carolina and right there, I fell in love. 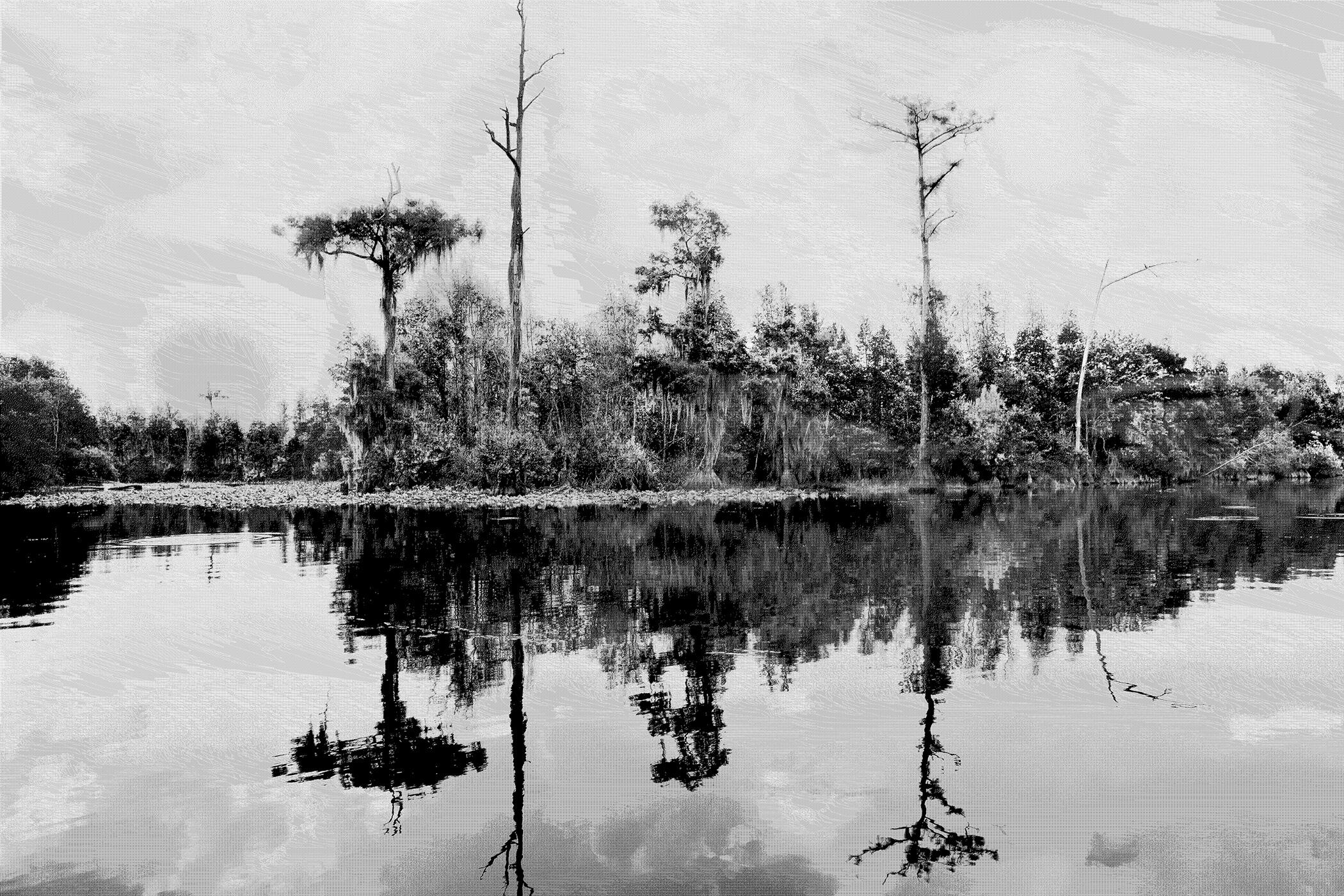 A: And what’s so attractive about a swamp?

AP: It’s this particular kind of swamp: the cypress trees, the mangroves, and a lot of moss. They are haunting.

I became very friendly with state forest rangers—these guys are what they call “swamp rats.” They’re incredible, highly educated guys. I asked if they could take me out in a boat in the swamp and they said that they could show me the alligators and the wildlife. But I told them no, I’m just interested in the swamps themselves. There were huge smiles on the rangers’ faces: They were so glad that I loved the swamps the way they do.

A: Do people tend to misunderstand the swamp habitat?

AP: Most people have this idea of swamps as alligator- and mosquito-ridden and just kind of slimy. I think this persona makes swamps unapproachable when truly, they’re wetlands that are teeming with life and really quite fantastic. 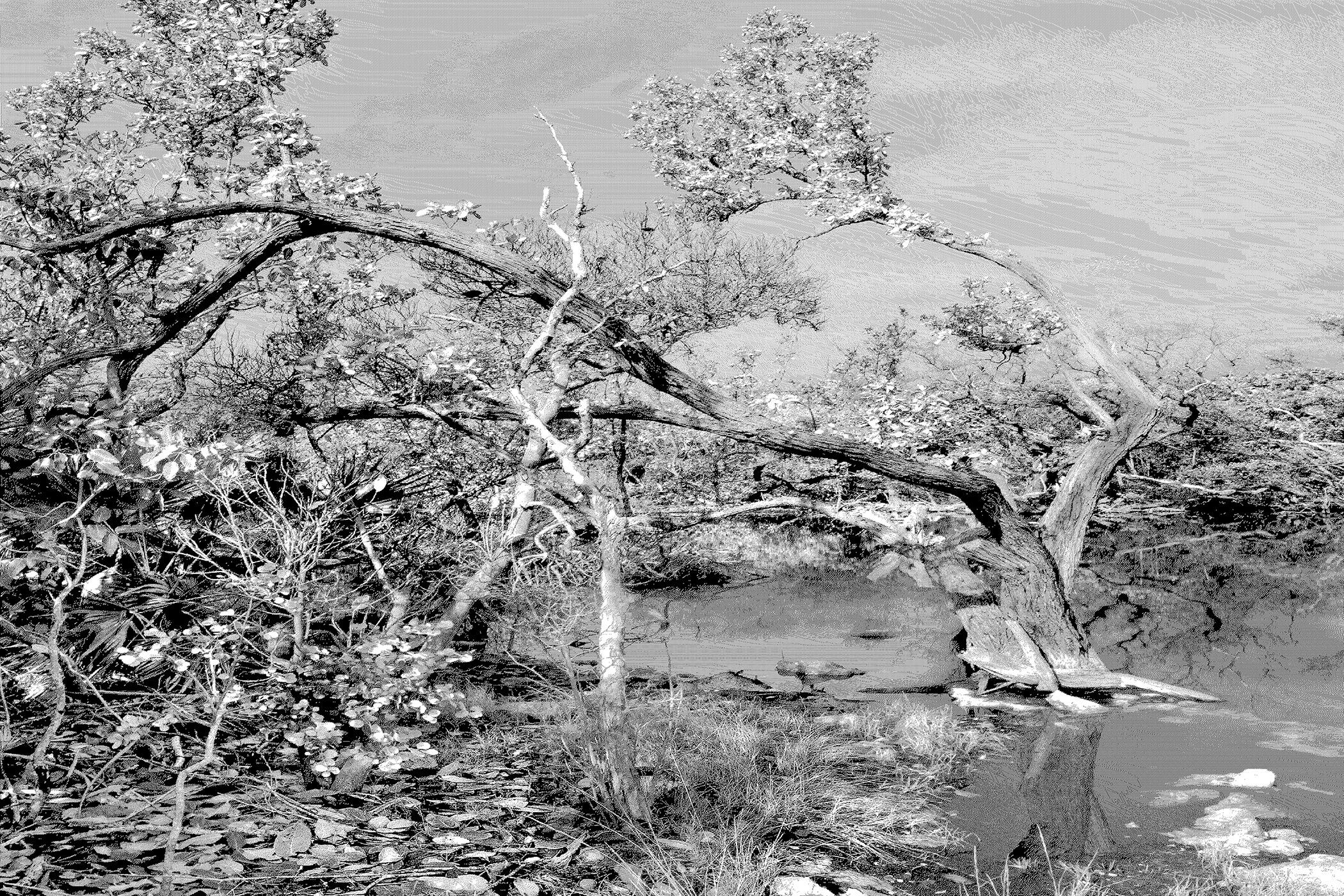 A: How can these photos help alter the swamp’s persona?

AP: I first just wanted to show that swamps are absolutely magnificent. But when I heard that these habitats were endangered, I wanted even more to take as many pictures as possible to make viewers aware of the fragility of the swamp.

The ecological system here is so delicate and in many regions, is now unbalanced. In some swamps, the only way to tell this is by posted warning signs that “the water is low”. . . no boats are allowed in the swamp when it’s this low.

A: Why did you choose to portray these Southern swamps in black and white?

AP: I’m playing with the history of landscape photography. Every landscape photographer, of course, has Ansel Adams in mind. Obviously, I did too, but I wanted to do something totally contemporary and technological with these. There’s something about the timeless quality of swamps and I felt that this quality was best shown in monochrome. 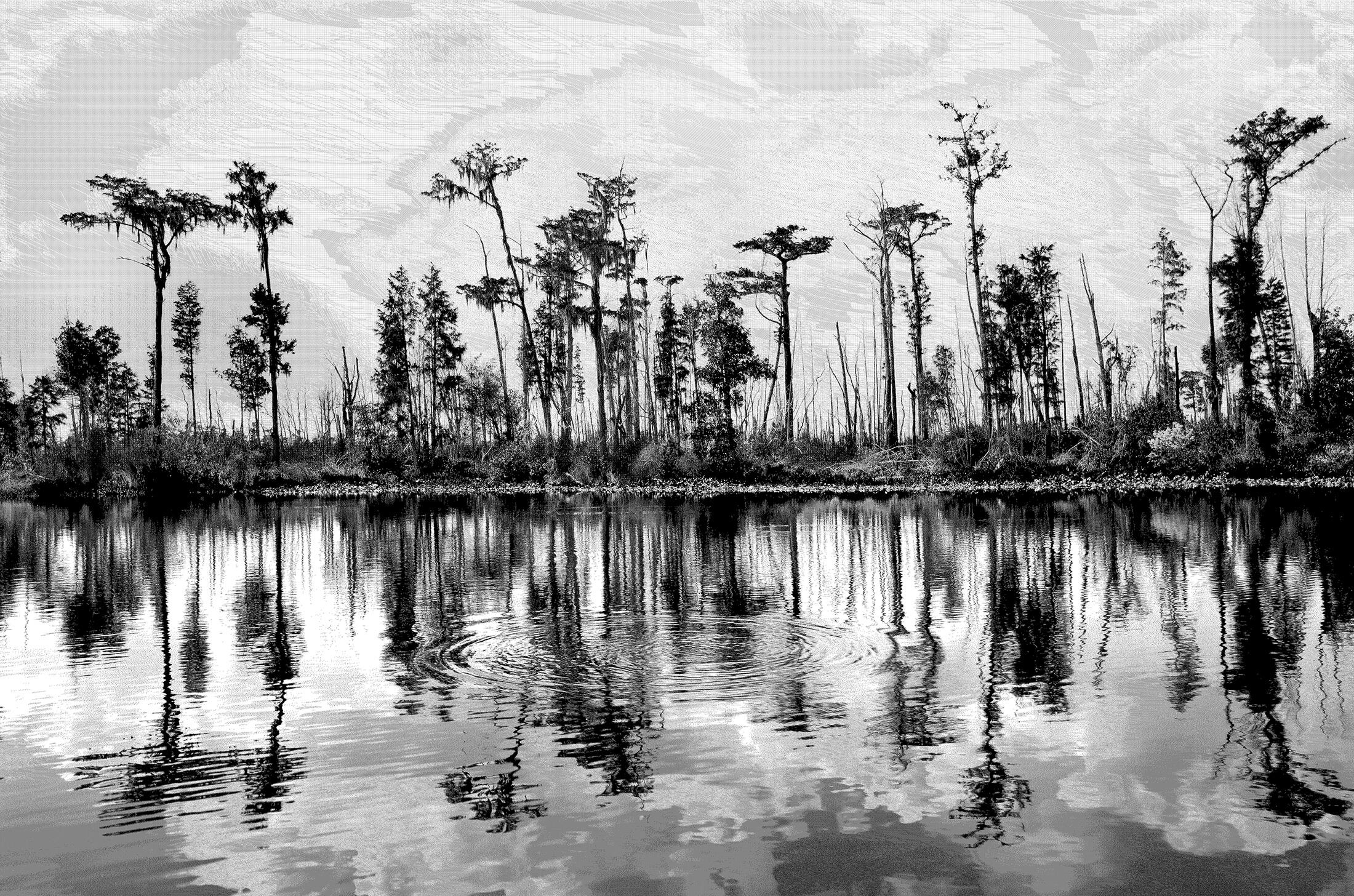 A: Can you explain the title of Fractured Botanicals?

AP: My process is to take a picture with a regular Canon camera, then keep modifying, modifying, modifying. I play with the image, break it down, jack it up in terms of resolution, until finally, the swamp images fracture into these really odd shapes.

A: How do swamp photos figure into the rest of your photography?

AP: The first things I shot when I got a little camera in my hands were flowers and landscapes. I explore other directions, but landscapes and flowers remain a first love. I’ve done a spectrum of work with social commentary, which swamps actually turned out to be: Let’s be alerted to the fragility of our natural resources. 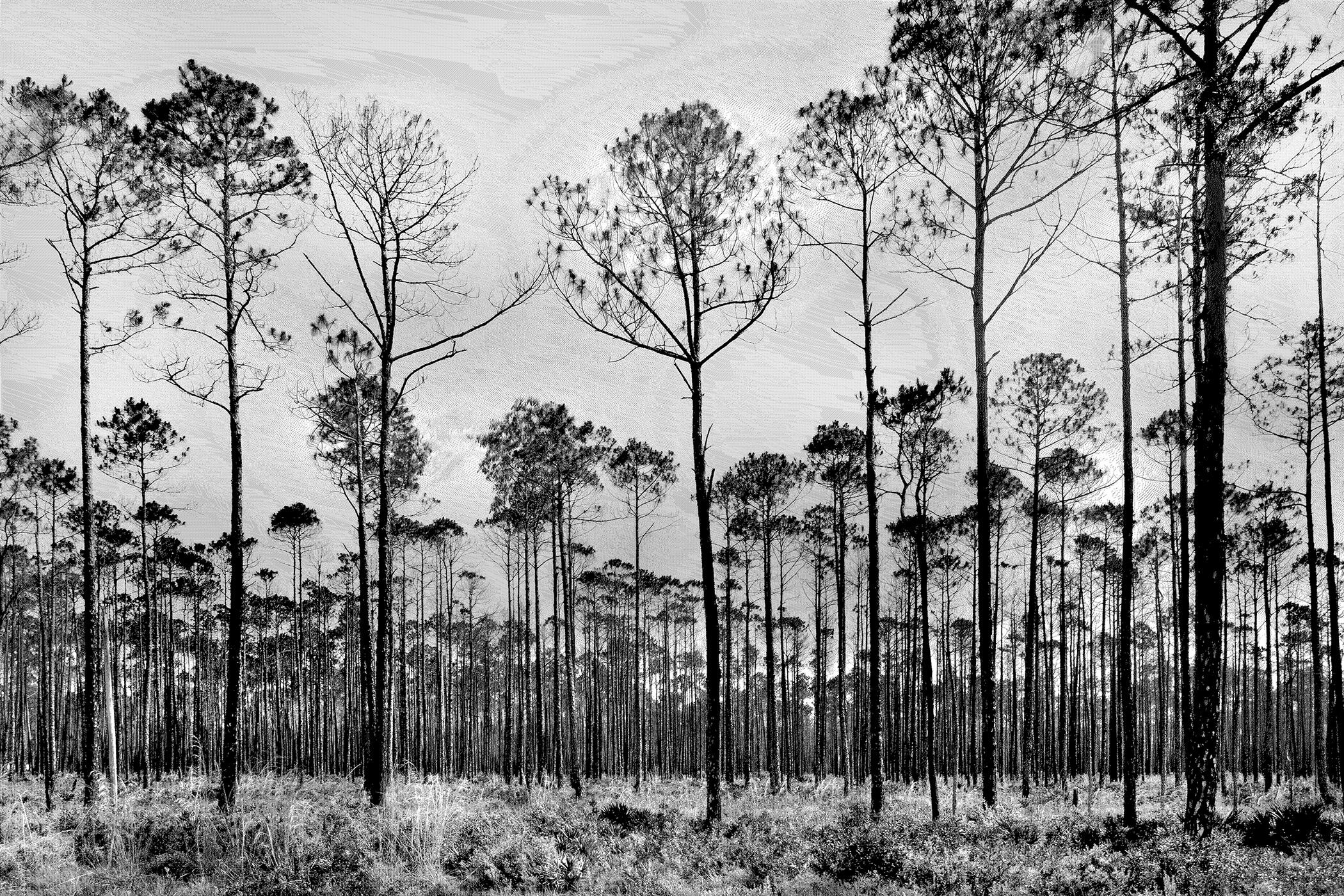 A: How have people reacted to your swamp photos?

AP: Nobody’s seen them! This is the first time they’ve been on display. But I hope people really begin to see the beauty of the swamps. Mountains and valleys and beautiful landscapes have always been photographed and they remain aesthetically wondrous and beautiful. I want people to see swamps as great wonders, too. They have an energetic quality, even the ones where there aren’t many trees and they’re kind of bare. They just have this sort of an elegance and a nobility. 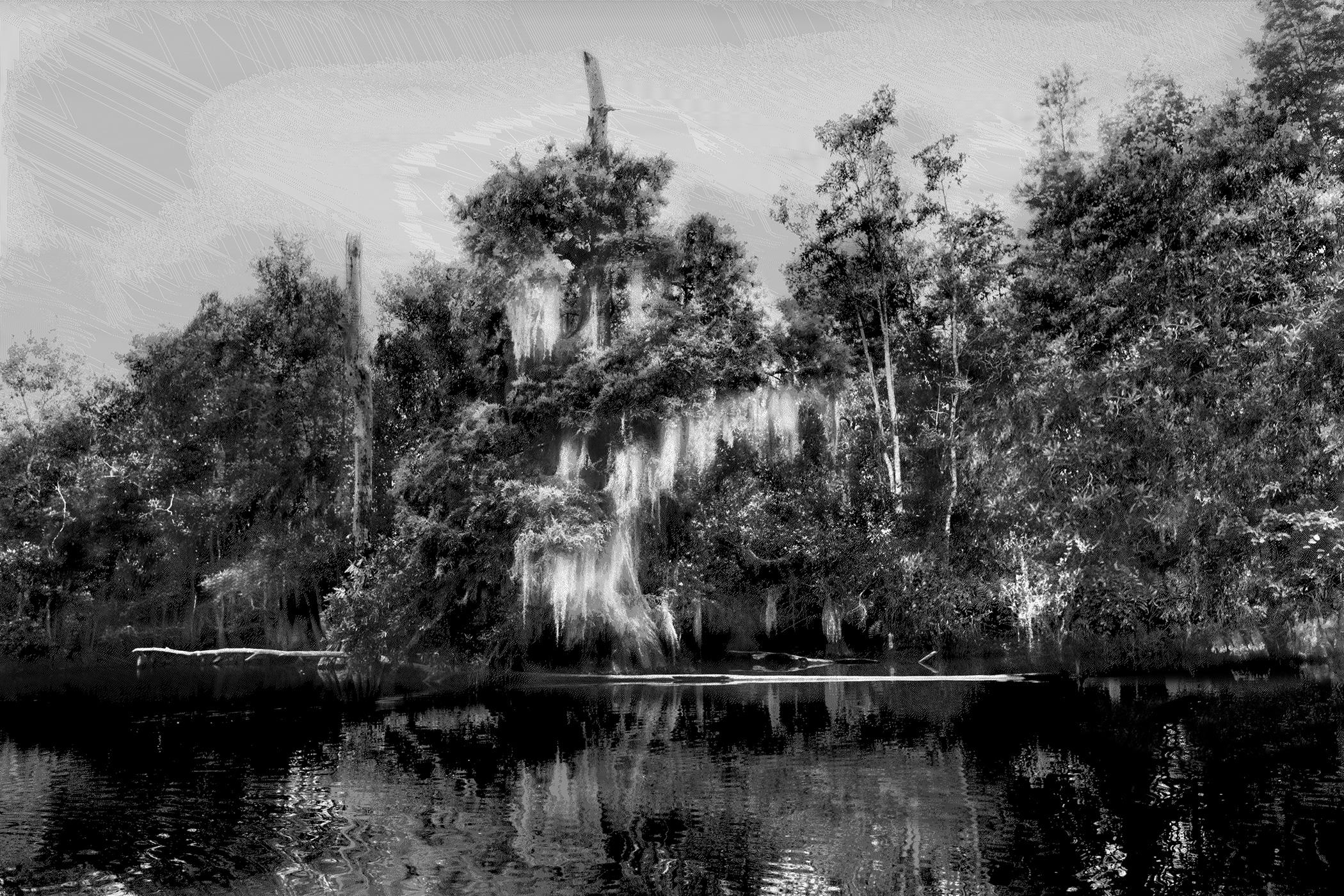 Mossy Swamp, Fargo, Georgia. Pigment print by Alexandra Penney
“The views expressed in user comments do not reflect the views of Audubon. Audubon does not participate in political campaigns, nor do we support or oppose candidates.”