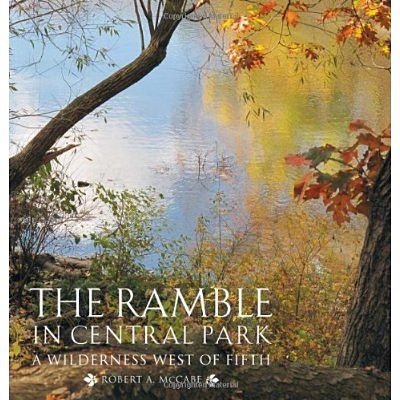 In his new book The Ramble in Central Park: A Wilderness West of Fifth, photographer Robert A. McCabe captures the stunning lake vistas, towering boulders, winding paths and streams, and rustic bridges of this 38-acre forested section of the park. In addition to McCabes photographs, the book includes writing from E.B. White, Marie Winn, and others. 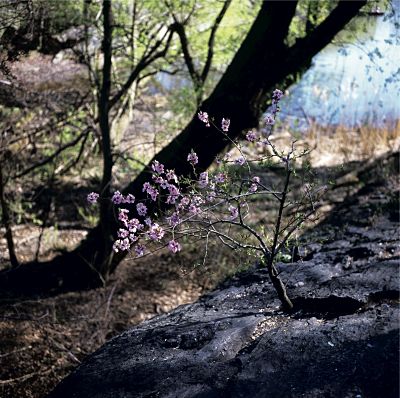 The Birds of the Ramble
By Cal Vornberger, wildlife photographer and author of the book, Birds of Central Park

When I tell people I spent three years photographing birds in New York City’s Central Park, I usually get a response like, “You sure must like pigeons.” While it’s true there are quite a few pigeons in the park, there is also an abundance of warblers, egret, hawks, ducks, woodpeckers, vireos, cuckoos, sandpipers, and flycatchers that visit Central Park, choosing the Ramble as their stopping point. In addition to resident species, as many as two hundred different migrants regularly pass through the park in any given year during spring and fall migration. Since its creation more than 150 years ago, the park has become a magnet for migrating neo-tropical songbirds and other species that winter in the south. More than 325 different species have been observed within the park’s 840 acres over the past century, and many bird watchers consider Central Park—and more specifically the Ramble—one of the top birding spots in the United States.

This phenomenon is a happy accident of geography and nature. Central Park is located on the Atlantic Flyway, the migration route favored by more than 150 species of birds that move back and forth to their breeding grounds in the north in the spring and the fall. Since most of these species migrate at night, the large dark area that is the Ramble among the light-filled concrete canyons must seem like an ideal place to find the rest and nourishment required to continue their journey. The park attracts and holds these birds because it provides a smorgasbord of food and water for these weary travelers. Some spring mornings when the winds have been steady from the southwest, hundreds of warblers seem to drop out of the sky and perch. On those happy mornings you will find bird watchers and photographers throughout the Ramble. 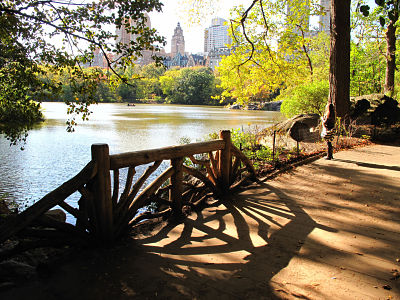 Beginning with the first Eastern Phoebe in mid-March and continuing through late May, a steady stream of migrating birds moves through the park. Most interesting to me are the small, brightly colored neo-tropical songbirds known as wood-warblers. I have photographed more than twenty-five different species of these tiny, colorful birds in Central Park, including such rarities as Black-throated Gray, Cape May, Prothonotary, Yellow-throated, Worm-eating, and Hooded Warblers. While less colorful in their nonbreeding plumage, these same birds stream back through the park beginning in August and continue to do so through early October heading south. There are also other migrants, including American Woodcocks, Spotted and Solitary Sandpipers, and numerous varieties of sparrows—but my heart belongs to the warblers. 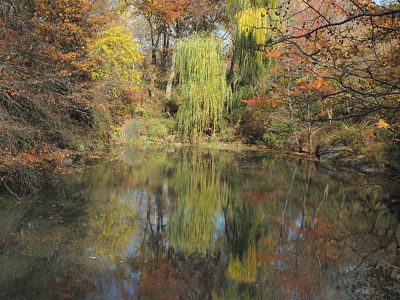 In addition to migrating birds, an Audubon study confirmed that there were more than thirty species of birds breeding in Central Park. Along with the ubiquitous robin, starling, sparrows, and gracklenests, the careful observer can find House Wrens, Gray Catbirds, Downy Woodpeckers, Tufted Titmice, Warbling Vireos, Cedar Waxwings, Wood Thrush, Northern Flickers, American Kingbirds, and White-breasted Nuthatches nesting in the park. The Mallards can also be counted on to provide several broods of ducklings on just about every body of water in the park. Some of the more unusual nesters are the Green Herons that return to the Upper Lobe every year and the Eastern Screech-owls that nest in several places in the park, including the Ramble. There are usually two or three Red-tailed Hawks nesting in the park during any given year, and American Kestrels and Merlins make their nests in the buildings adjacent to the park.

Summer in the park can be a bit slow. There are, however, plenty of egrets and herons, and most of my time is spent photographing these long-legged waders and the various nesting birds. Fall brings migrating warblers back to Central Park in large numbers. Although the males have shed their bright plumage they are still fun to photograph. Ruby-throated Hummingbirds also visit the park in the fall, attracted by the many deep-throated flowering plants. These tiny birds extract nectar from the flowers with their long, thin bills and are very active feeders. It’s hard to get more than two or three shots before they dart to another flower.

Winter is ideal for getting spectacular shots of hawks and owls. Since there are no leaves on the trees, these predators are relatively easy to find. Extra help is provided by Central Park’s squirrels; they make a low, mewing sound when they spot a hawk perched in a tree. Owls are also frequent winter visitors. Long-eared Owls and Saw-whet Owls are the two most common species found in the park. Although nocturnal, they can usually be found during the day roosting high in the park’s many pine trees. A Boreal Owl turned up a few years ago next to the restaurant Tavern on the Green, and Long-eared and Eastern Screech-Owls also visit from time to time.

In winter a dedicated group of birders maintains several feeders in Evodia Field in the Ramble. Hairy and Downy Woodpeckers, Fox Sparrows, Savannah Sparrows, Carolina Wrens, Common Redpolls, Black-capped Chickadees, and Tufted Titmice are frequent visitors to the feeders. The benchers near the feeders are a good place to sit and wait for the hawks that are inevitably drawn to the large numbers of smaller birds feeding there. I’ve gotten some of my best raptor shots there. 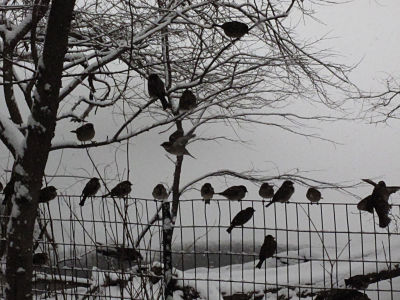 It’s not unusual to find Wood Ducks, Hooded Mergansers, Ruddy Ducks, Grebes, and other freshwater wildfowl on the Meer or Central Park Lake in winter. Several years ago, during a cold snap, the open water on the Lake was reduced to a small area, and all the waterfowl were concentrated very close to shore. Although wary, they came much closer to humans than they would in the wild. By lying on the ground I was able to get some very nice eye-level shots of Wood Ducks and Hooded Mergansers. Often brightly colored male Wood Ducks visit Central Park Lake and say for the winter.

There are always a few rare birds that show up in the park. The Tavern on the Green Boreal Owl was a highlight, although a vagrant Black-throated Gray Warbler also made a brief appearance (far from its home out West) and a Western Tanager (another western vagrant) hung around most of the winter two years ago. And there are often juvenile Red-headed Woodpeckers that winter in the park. One late November several years ago, five Long-eared Owls perched in a tree about ten feet above an active walkway near Bow Bridge in the Ramble. They stayed for several weeks and attracted large crowds.

The park even has its own celebrity bird, Pale Male, so named because of his very pale coloration. This Red-tailed Hawk made headlines when he and his mate were summarily evicted from their lofty Fifth Avenue nest by a heartless o-op board. The hawks had nested above a window no the seventh floor of the same building for the past thirteen years. With the help of Mary Tyler Moore (a resident of the building) and crowds of vocal protesters, Pale Male’s nest was returned. What’s remarkable about these Red-tails is that they built their nest on a building in the first place. According to experts, Red-tails don’t normally do that.

Although Central Park is completely man-made, it was designed to be part wilderness, and these wild areas, most notably the Ramble, are ideal for wildlife photography. An abundance of food and water and a happy fluke of geography combine to make Central Park a wildlife photographer’s must-visit venue. I don’t think there’s been a day when I didn’t return home from the park with at least one “keeper.” But I’d rather keep this our little secret; so if you visit the park and agree with me, please don’t tell anyone else.

All photographs by Robert A. McCabe, The Ramble in Central Park: A Wildnerness West of Fifth