(See updates below the bracket.)

I’ve always been surprised at the number of sports teams named after birds. Hawks and eagles I get, but penguins? Cardinals? How’d they get in there? But however it happened, I’ll take the opportunity for avian education and engagement.

The trouble is, most sports teams do a terrible job with their avian mascots. Birds are often drawn into team logos with little regard for their ornithological accuracy (shockingly!). Sometimes they’re just generic creatures, other times they’re played for laughs.

Well, I think it’s time for us birders to take a stand. Audubon has let me start this contest, done under the topical March Madness bracket format, to let you, dear readers, decide which bird-named sports team is best. How you vote is ultimately up to you, but my preference is that you choose the team which best respects its avian avatar. How accurate is the bird shown in the logo? Is it a “good (read: interesting)” bird or something generic? One thing’s for sure: The team’s athletic prowess has no bearing on the outcome (these teams don’t even all play the same sport, after all).

I have seeded 16 professional, minor league, and college teams into the bracket below mostly from the Big Four major sports (baseball, basketball, football, hockey). I had to leave a lot of great minor league and college team names off the board (sorry, Idaho Falls Chukars and Endicott College Gulls!), but we only have so much time. 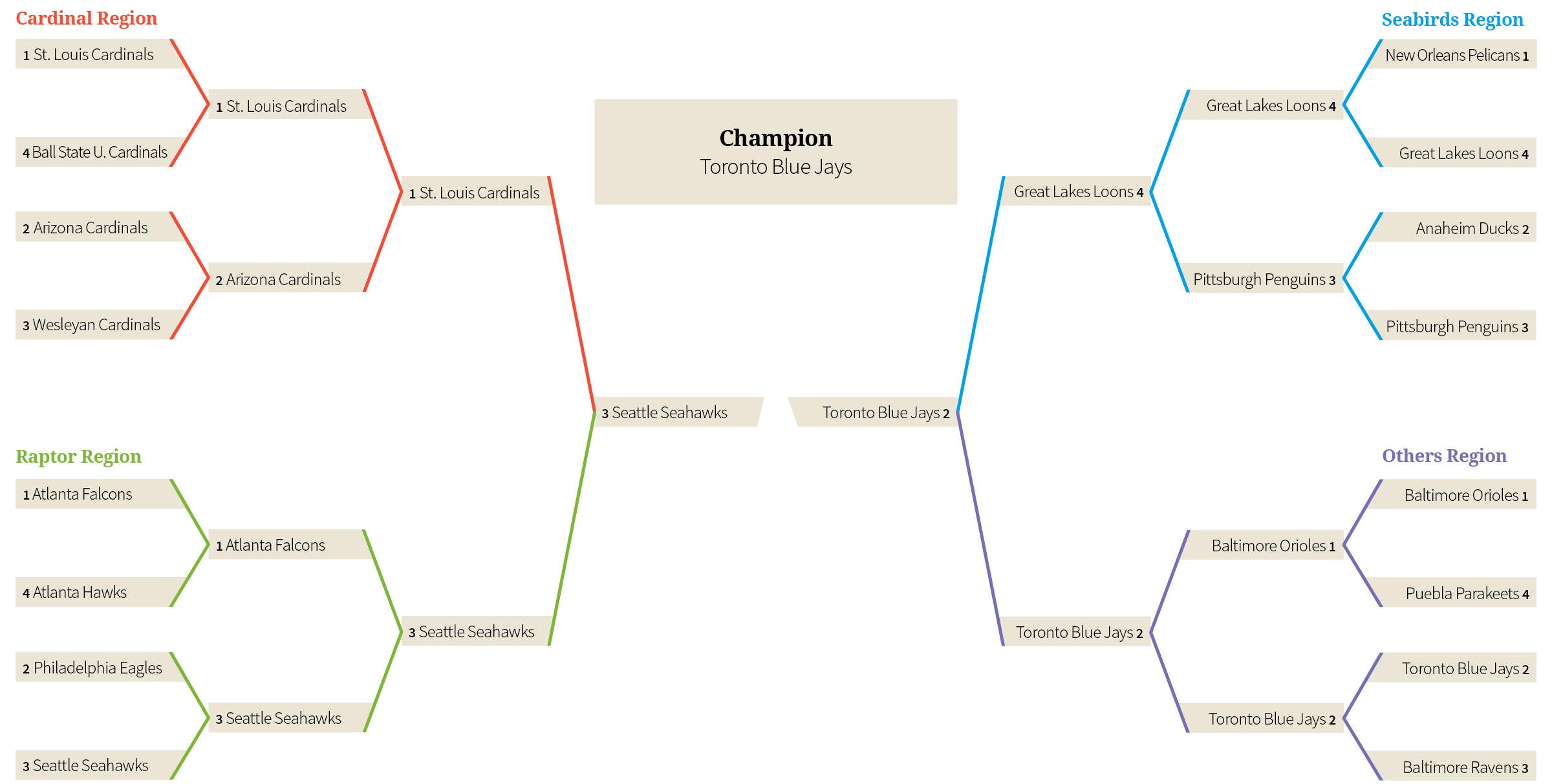 When Toronto was awarded an expansion Major League Baseball franchise in 1977 and asked the citizens to help find a name, more than 30,000 people submitted their ideas, ranging from “Towers” to “Beavers” to “Hogtowners” to “Trilliums.”

In the end, however, a team of judges selected the name “Blue Jays.” They explained their choice thusly: “The blue jay is a North American bird, bright blue in color, with white undercovering and a black neck ring. It is strong, aggressive and inquisitive. It dares to take on all comers, yet it is down-to-earth, gutsy and good-looking.”

There aren’t a lot of bird species described as “down-to-earth,” but I gotta admit that it fits the Blue Jay. It’s a beautiful bird, almost stunningly so, but it’s not snobby or pretentious. It lives in the neighborhood, and eats seeds out of the same feeder as its pedestrian neighbors. It’s not too good for us, though it could be. Maybe that’s why we love it so much.

Tonight you’ve voted the Toronto Blue Jays as the best bird-named sports team in North America, the culmination of a month-long competition. The Blue Jays topped the Seattle Seahawks on the National Audubon Facebook page in a relative landslide, 194 likes to 118 likes.

Where do we go from here? Well, wherever you’d like. If you’re a birder but sports-agnostic, I encourage you to adopt the Toronto Blue Jays as your new favorite team. They’re bird-people approved! Go buy a hat and wear it with pride.  Cheer for the Blue Jays if you see them on TV. Support bird-positive images in mainstream culture.

Or don’t. The good thing about these tournaments is that there’s a new one every year. If you’re a Seahawks fan or a Baltimore Orioles fan or one of the lucky few Great Lakes Loons supporters out there, keep on keepin’ on. There’s always next year. Until then, go Jays! Now, let’s go out and find some real ones!

Mid-March feels like an eternity ago. Marco Rubio (remember him?) was still in the race for President. A movie called Zootopia ruled the box office. And our NCAA Men’s Basketball Tournament brackets were not complete disasters, crumpled up and thrown into a garbage can.

But there’s one tournament we should pay attention to, one in which we’re all still winning. The Audubon Bird-Named Sports Teams Bracket!

We’re down to the final game, with just one more step before we can crown a single squad as the best with an avian theme. Let’s get to it.

Gotta hand it to the Loons on a fantastic run. These scrappy minor league ballplayers started the tournament by laying waste to the #1 seed New Orleans Pelicans, and then stomped on the Pittsburgh Penguins to make the Final Four. Impressive. They’ve run out of gas against the powerhouse Blue Jays from North of the border, though. No Canadian NHL teams made the playoffs this year for the first time in years, and so maybe the nation is making up for it by voting for their baseball team. Who knows? But they’ve made it to the championship.

The Toronto Blue Jays garnered the most likes in each of the first two rounds, but the Seahawks were hot on their tailfeathers. In the Final Four they took top honors, and look to keep that momentum going. The St. Louis Cardinals are a venerable team, and for the Seahawks to make the upset says a lot about their fan base.

In one corner, a powerful bird-of-prey representing a hard-nosed NFL football squad that won the Super Bowl two years ago. In the other corner, a colorful, familiar passerine representing the only remaining Canadian MLB baseball team, which last won the World Series in 1993.

I am probably not supposed to editorialize, but it’s my column so I don’t care. I think you should vote for the Blue Jays. For one thing, a “blue jay” is an actual species while a “seahawk” is a nickname. For another, the Blue Jays’ uniforms are subtly beautiful, with a big, bird-head logo, rich blues, and a unique typeface. The Seahawks’ uniforms look like a kid’s barf after eating fruit snacks. There’s no connection or coloration to an Osprey, though I do give them credit for the Native American origins of the logo.

The final vote is up to you, dear readers. What’s your pick?

Round 3: The Final Four

Our contest to determine the greatest bird-named sports team is getting serious. We’re at the Final Four.

We’ve started with four birds in four different Regions—Cardinals, Raptors, Seabirds, and Other —and now we’ve got winners for each one. And I tell ya, they have not gone as I’d predicted. Only a single #1 seed has made it through to the Final Four, joining a #2, #3, and #4 seed. Lots of excitement! Let’s get to the results, and the Final Four matchups.

Vote on the Final Four Through April 2 at Audubon’s Facebook Page.

Even though I ranked them a #1 seed in their region, I think I underestimated the support for the St. Louis Cardinals. I’m not going to lie: The yellow bill thing really gets to me. I love everything about the logo except that. But they’re a great team, with a lot of loyal fans willing to overlook a yellow bill in the same way we all overlooked Cardinals slugger Mark McGwire’s supplement intake in 1998. It’s more fun that way.

But now they’re up against another champion, the Seattle Seahawks. Like the yellow bill on the St. Louis Cardinal, I like everything about the Seahawks logo except the name. If they were the Seattle Ospreys they’d be the clear-cut favorites. Well, unless the Cardinals take up this suggestion I saw on Twitter that the team should change the birds on the logo to females for Mother’s Day. Then there’d be no stopping them.

The Blue Jays continue their romp through this tournament, having garnered the most likes in each of the first two rounds. They’re a dominant force, and I got no problem with that. It’s a beautiful logo, bucks the trend (common among bird-named teams) of having to be fierce and tough, and Blue Jays are just awesome birds.

Gotta hand it to the Great Lakes Loons, though, right? A tiny Single-A baseball team out of western Michigan now in the Final Four against three professional champions? A Cinderella story! It’s a great logo, a good local bird, and a great story. Vote away!

Round 1 is in the books, and we’re narrowing down the field to find the best bird-named sports team in the nation. And what a Round 1 it was! (Or, as I just now thought of calling it, the “Tweet 16”!) Match-ups that came down to the wire! Upsets! Just like this year’s actual NCAA men’s basketball tournament, the opening days of this contest have been memorable. Now on to the Elite 8. (Parakeet 8? What other bird things rhyme with “elite”?)

Remember, we’re here to determine our favorite bird-named sports team. You can vote on whatever basis you’d like: ornithological accuracy of the logo, uniqueness of the bird depicted, favorite color, whatever.

Here are the results from Round 1, tabulated via the National Audubon Society’s Facebook page “likes” for each team picture:

Both the professional teams take victories here, though Arizona barely squeaked by the upstart, red-billed Wesleyan Cardinals. I would have enjoyed seeing Wesleyan continue on to carry the torch for accurate Northern Cardinal bill colors, but the people have spoken and they want to see the two pro teams face off.

So who will take it here? The St. Louis baseball team has a lot of history in that logo, but is it just me or is the St. Louis bird looking a little uncertain perched there on the bat? Made nervous by the uncharacteristic snarl of the Arizona bird? Could be. Let’s let the voters decide whether St. Louis has got anything to worry about.

Seahawks with the upset! That’s what you get for turning our national bird green, Philadelphia.  The Seahawks deserve the victory: cool logo, cool bird. And, thanks to Twitter user @annaliisa, we now know the exact Kwakwaka'wakw mask that the logo was based on. Can the Seahawks keep the upsets rolling by taking out the cool-but-generic Falcons from Atlanta? Vote to decide!

Two upsets! I think the Ducks were seeded incorrectly, and they got hammered by the adorable scarved Penguins from the Steel City. The real story here is the tremendous performance from the Great Lakes Loons, who trounced the NBA’s Pelicans. I heard that Pelican’s star player Anthony Davis took the news so hard he decided to sit out the rest of the season. Feel better, champ.

Round 2 will be a great battle in the Seabird Division. Both the Loons and the Penguins got 61 likes, the most of any team so far. I look forward to seeing who’ll take it all the way.

Solid efforts from the Ravens and the Parakeets here, but there was no way they were taking down these two top-seeded baseball-bird powerhouses. The Baltimore Orioles, despite their lame new logo, have that “team name is the species name” trump card, but the Blue Jays logo is just darn gorgeous, and they garnered more likes than any other team in the contest. Going to be an intense Round 2! <a href="https://www.facebook.com/media/set/?set=a.101535862267990