The new leadership at our federal departments and agencies will play a significant role in key decisions impacting Audubon’s conservation efforts. We are closely following the work of recently confirmed Secretary of the Interior Ryan Zinke. Secretary Zinke, who represented Montana in Congress, is a self-described Theodore Roosevelt Republican.

David Yarnold, Audubon's president and CEO, publicly called on the Secretary to back up his strong words with even stronger actions to protect our natural resources: “If Secretary Zinke is genuine in his commitment to science-based conservation and a legacy worthy of our children and grandchildren, Audubon will work with him in good faith. After all, he is on the record opposing the sale or transfer of public lands, endorsing the permanent authorization of the Land and Water Conservation Fund, agreeing that some natural areas are too beautiful to develop and calling for improved water infrastructure in a drought-stricken West—all good things for birds and people.”

Audubon expects to hear more in the coming weeks about another important cabinet position—the Secretary of Agriculture. The Secretary will play an integral role in carrying out conservation programs on working lands, and developing the next Farm Bill, which is the single largest source of federal funding for wildlife conservation. The Farm Bill also impacts our Western water priorities by supporting water conservation efforts and restoring streamside habitat for birds. President Trump has nominated former Georgia Governor Sonny Perdue to the post, but he has yet to be confirmed by the Senate. Governor Perdue will need to testify at a hearing prior to receiving a vote in the Senate. We hope to work with the Secretary-designate to ensure robust conservation funding in the Farm Bill, and we will be closely following his statements regarding his priorities as leader of the USDA. 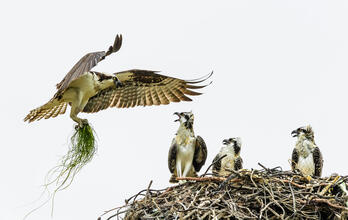