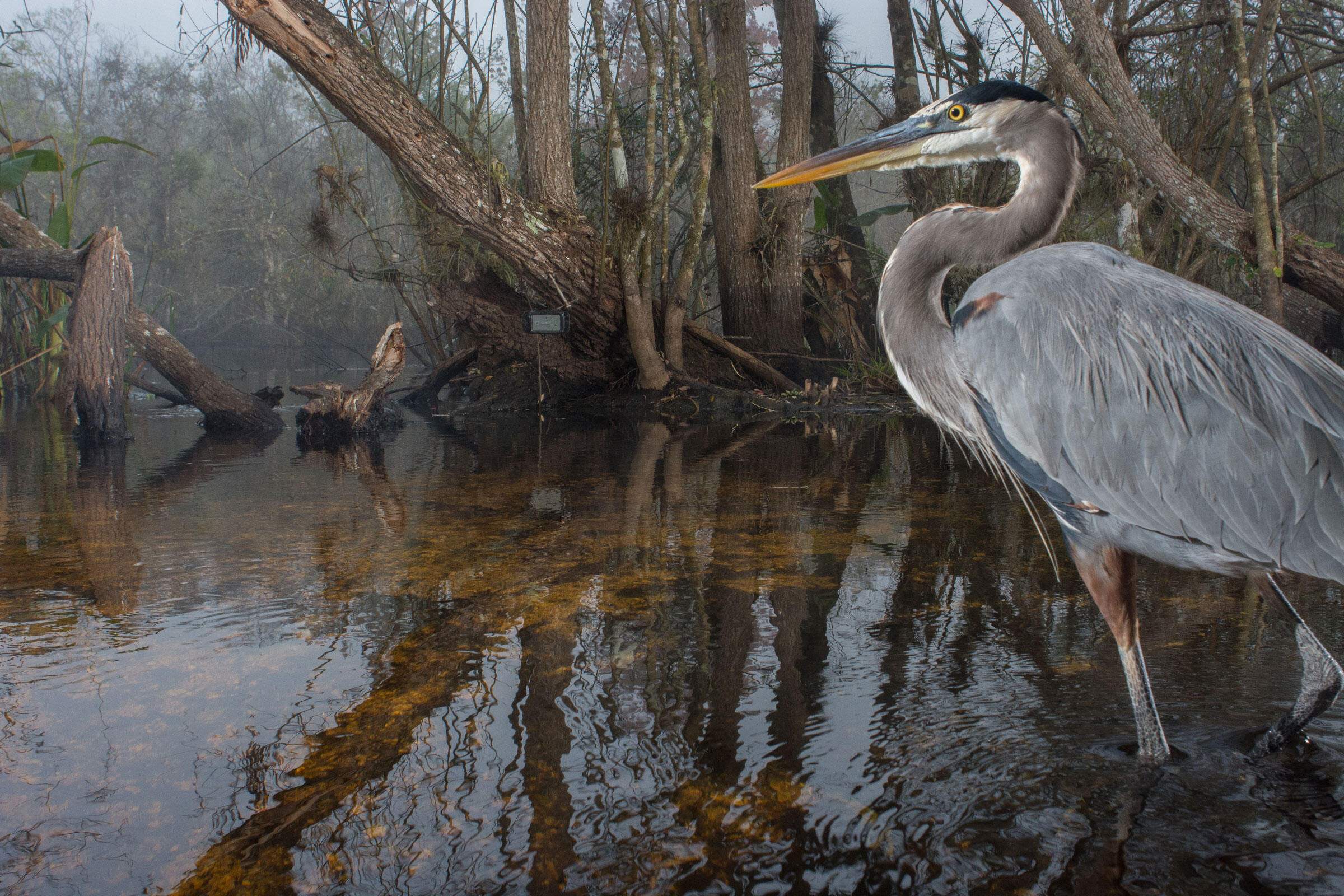 This is a picture of a Great Blue Heron. This is not a Florida Panther. Photo: Carlton Ward Jr.

Photographer Carlton Ward got a lot less cat and a lot more Great Blue Heron than he expected during a recent project in Florida.

When photographer Carlton Ward returned to the Florida Panther National Wildlife Refuge to check the camera traps he’d set up a month before, the results were not what he expected. In November 2017, the Florida-based photographer had carefully set up his rig amid tangled roots, mud, and leaf litter on a flooded trail in hopes of capturing an elusive panther. But as he scrolled through the images, there were no shots of the endangered cat.

Instead, Ward found about 4,000 pictures of various birds, including egrets, ibises, cormorants, and herons, that had triggered the camera and crashed his shoot. One that stood out, he says, was a majestic Great Blue Heron that looked like it was almost posing for the camera.

The wading bird is the largest heron in North America and thrives pretty much anywhere there is water, from desert rivers to subtropical mangrove swamps and even water-treatment facilities. Unknowingly, this one had stolen the spotlight.

“He seemed pretty territorial, I saw him in some pictures chasing an egret away,” Ward says. “This Blue Heron seemed [like] king of the roost, and he was the one who was responsible for burning up most of my camera and flash batteries.”

Great Blue Herons prefer relatively shallow waters, where they can stand motionless while waiting to nab fish swimming by. When Ward first placed the cameras, he says the water had been waist-deep. But when he returned, it had dropped low enough for birds to comfortably hunt, which explains why he ended up with so many waders in his shots.

Ward’s work in the refuge is part of a photo series he started with National Geographic called Path of the Panther. Through the project, he hopes to inspire conservation of the Florida Everglades by taking people on a journey following the big cats and their secretive lives.

Though frustrated with the interloping birds, Ward still appreciates the images and what they show. Photographers typically use a long, telephoto lens to highlight a bird's beautiful details, he says, but this can neglect the background. The Great Blue Heron here was captured using a wide-angle lens for the camera trap, which helps provide important context—the untouched areas where animals forage and live.

This is why Ward is such a fan of camera-trap photography. “The beauty of it is it allows you to show an animal in its environment on its own terms,” he says. “It’s basically a studio in the woods with a camera and multiple lights on a location where you think it's probable you'll eventually get the animal you're seeking.”

And along the way, you get plenty of other animals as well. During his interview with Audubon for this story, Ward was walking back into the refuge to do damage control for one of his setups. This time it was a black bear that sabotaged the shot: The burly creature had stood on a log that snapped, dismantling the camera’s motion sensor. But as with the heron, Ward ultimately doesn’t mind the inconvenience. It comes with the job, he says, and whether it's a bear, panther, deer, or bird, these photos show the diversity of the wildlife in the Everglades, and all of it deserves protection.