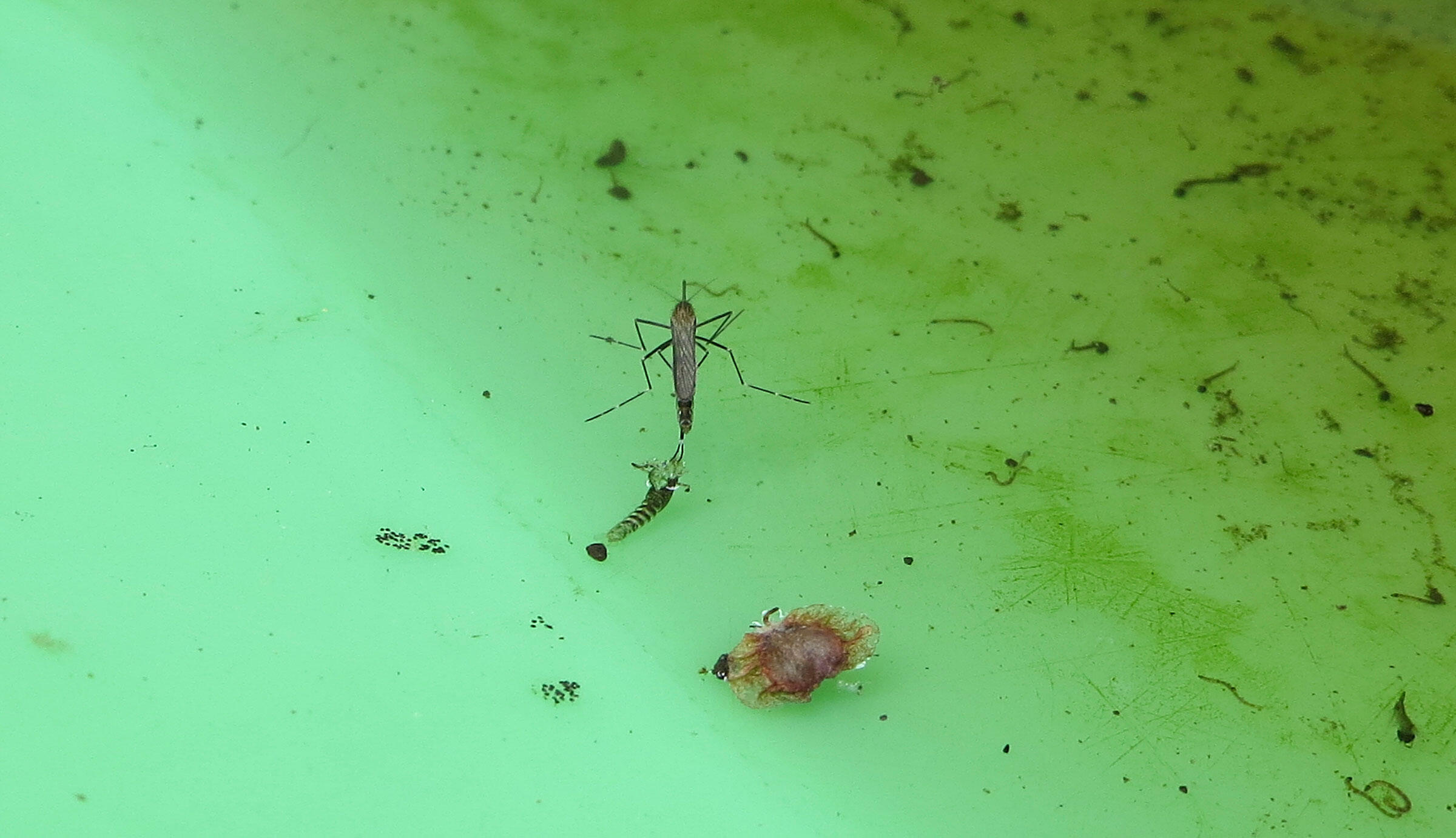 Would the world be better off if mosquitoes were eliminated? Photo: NYSIPM/Flickr CC (BY 2.0)

Can Birds Survive Without Mosquitoes?

With tropical diseases like Zika spreading across the globe, many experts suggest eradicating mosquitoes to save human lives.

With public health concerns rising over mosquito-borne diseases, primarily Zika but also malaria, yellow fever, and chikungunya, scientists and government officials all over the globe are scrambling to control the pesky insects. The recent rise in serious birth defects caused by Zika has even convinced some that it’s time to eliminate mosquitoes, once and for all.

Dr. Niraj Tolia, malaria expert and associate professor at Washington University School of Medicine, is one of those people. “Hypothetically speaking, complete mosquito eradication would be a tremendous benefit to human health given the number of diseases transmitted by these vectors,” he says.

That being said, humans aren’t the only creatures that would benefit from mass pest control. Certain mosquitoes carry parasites or viruses (“arboviruses”) that can sicken and kill birds, including West Nile virus, avian influenza, and avian pox. But that doesn’t stop certain species—mainly swifts, swallows, flycatchers, nightjars, and Purple Martins—from snacking on them. Waterfowl also tend to skim lakes and ponds for mosquito eggs and larvae, while Merlins and owls target the larger insects and animals that dine on the suckers.

The benefits of a mosquito-free planet are pretty clear from a human perspective; but let’s see if birds could deal without them.

The Effects on the Food Chain

Mosquitoes are prolific procreators: There are hundreds of trillions of them (more than 3,500 species) buzzing between the Arctic Circle and Sub-Saharan Africa. Getting rid of that much biomass would most likely have some effect on global ecosystems, says Laura Harrington, a professor of entomology at Cornell University. And since mosquitoes are one of the lowest rungs on the food chain, there are entire strings of predators that indirectly depend on them.

One insect eater that may be harmed by the loss of mosquitoes is the dragonfly, says David Bird, an aptly named avian expert and emeritus professor of wildlife biology at McGill University. Dragonflies eat anywhere from 30 to hundreds of mosquitoes per day—a complete extermination would mean that a significant part of their diets would disappear. In turn, Merlins could feel the burn, too, since they often feast on dragonflies.

Yet even without mosquitoes, Bird believes that both dragonflies and Merlins can survive. “Animals, including birds and dragonflies, like to get a big bang for their buck,” says Bird. “If given the choice, insect-eaters are more likely to go after larger, more nutritious bugs. So it’s unlikely they’d be at a loss for food.”

As for the long-held belief that Purple Martins are huge mosquito-philes: It’s not true that they can wipe out entire colonies with their hungry beaks, Bird says.

“There are a ton of people out there who go and buy Purple Martin houses, thinking the mosquitoes in their yards will magically disappear,” he says. “If a single Purple Martin ate only mosquitoes, it would have to eat 14,000 mosquitoes a day. It could get the same amount of nutrition from eating a dozen beetles. Chasing all those mosquitoes is a lot of wasted time and energy.”

So it looks like the martin-mosquito myth is officially busted: These speedy swallows could fare just fine without mosquitoes.

Is Eliminating Mosquitoes Even Possible?

If Purple Martins can’t control mosquitoes, what can? In areas where mosquito-borne diseases are prevalent, public health experts recommend large-scale insecticide spraying. But insecticides can be toxic to other invertebrates, birds, and even people. What’s more, some mosquito species are showing an increased resistance to the most oft-used formulas. Overexposure is not the key here.

Given the sheer number of mosquitoes that exist in the world, “in reality we’d never be able to eradicate all mosquito species,” says Harrington, who’s studying how mosquito ranges are shifting as a response to climate change. She recommends eliminating the most problematic species—that is, the ones that cause the most disease.

Researchers are trying to do just that, with genetic engineering technologies, such as CRISPR-cas9. “Today you can create a genetically modified mosquito with an engineered gene that’s inherited, so all progeny are born male,” says Andrea Crisanti, a professor of molecular parasitology at Imperial College London. Crisanti is studying how genetically engineered mosquitoes can reduce the transmission of malaria. His research shows that “the modification can cause a sex imbalance and shrink a mosquito population.”

Genetic-engineering technologies can even take down entire species of mosquitoes, such as the dreaded Zika-carrying Aedes aegypti, Crisanti says. He believes that Aedes aegypti is “an ideal target” because it’s an invasive, viral-bearing species in many parts of the world. “If you got rid of it, I don’t think it would have a big impact on the environment,” Crisanti says. “No one would mind.”

When plotting extinction, there’s one other thing to consider: “Would a more dangerous creature fill the mosquitoes’ void?” Bird asks. Aristotle once said, “nature abhors a vacuum.”

But without serious funding, and a more substantial plan, it doesn't seem a vacuum will exist any time soon.