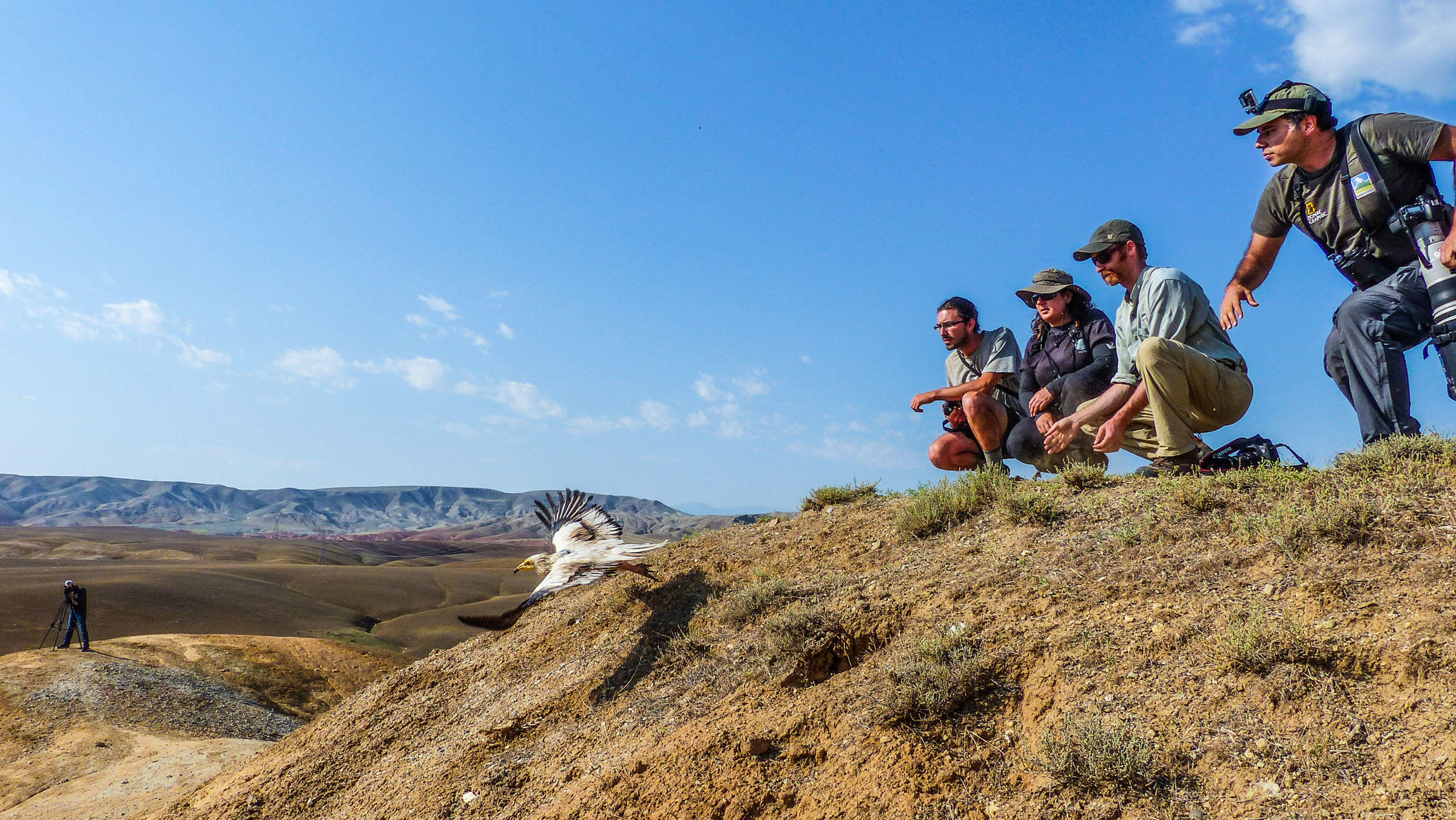 An Egyptian Vulture is released in eastern Turkey with a satellite tracking device that allows detailed monitoring of its movements. The crew (from left to right): Cagan Sekercioglu, Evan Buechley, Lale Aktay, and Joshua Horns. Photo: Kayahan Argikaya

Can We Save the World's Vultures?

Scavenging birds are teetering on the brink of extinction. Here’s what we’re doing to help bring them back.

Vultures may not be up for many beauty contests—or popularity contests, either. But when it comes to keeping ecosystems clean and healthy, they’re the top dogs in every respect. Sadly, experts are warning that half of these scavenging species are currently at risk of extinction.

Evan Buechley, a PhD candidate and National Science Foundation Fellow at the University of Utah, has been studying vultures across North America, Europe, Asia, and Africa for the past decade. Over the years, he and other researchers have noticed that vulture populations have been declining worldwide, while populations of other scavengers like crows, gulls, ravens, feral dogs, and rats seem to be on the rise. So, he set out to investigate.

What he found isn’t good news for anyone: Of the 23 vulture species across the globe, nine are critically endangered, three are endangered, and four are near threatened. Only seven species have an optimal conservation status. The driving force behind the collapse, Buechley says, are toxins found in the vultures’ carrion. “Indeed, poisoning is the leading cause of decline for 88 percent of all threatened vulture species,” he says. The types of toxins vary depending on the region of the world. In South Asia, the biggest killer is the veterinary drug diclofenac; in Africa, it’s pesticides like Furadan; in North America, it’s lead from spent ammunition.

Luckily, a number of creative rescue efforts have come together in recent years. Here are four ways scientists and communities are saving these spectacular scavengers in different parts of the world.

Since the early 2000s, vulture-protection groups have used captive breeding and reintroduction to increase populations of target species and boost their genetic diversity in the wild. Cool new breeding techniques, such as 3-D-printed eggs at the International Centre for Birds of Prey and double laying and egg swapping by Saving Asia’s Vultures from Extinction (SAVE), have helped make this happen.

But vulture reproduction is notoriously slow, Chris Bowden, the globally threatened species officer at the Royal Society for the Protection of Birds (RSPB) and SAVE program manager, says—which is why these birds need all the help they can get. Extremely threatened species, such as those belonging to the Gyps genus, are generally the best candidates for these programs.

Thanks to killer innovations, several high-tech vulture-monitoring programs are now in place across Asia, Europe, and Africa. In Oman, for example, ecologists from the Environment Society of Oman (ESO) and International Avian Research have been tagging Egyptian Vultures with GPS trackers since 2015. By studying GPS data, scientists can gain insight into the vultures’ behaviors and home in on population hotspots.

The most challenging part of the research? “Trapping the vultures,” says Maïa S. Willson, research and conservation manager of ESO. Doing so involves baiting, netting, and grabbing a bird with a nearly five-foot wingspan and bone-crushing beak.

Diclofenac is a common drug used by farmers across Europe, Asia, and especially India to treat livestock disease. It’s also poisonous to vultures: When they feed on dead, treated cattle, the birds succumb to kidney failure, sometimes appearing lethargic and droopy before death.

The movement to ban diclofenac has been quickly gaining steam: “South Asia governments have responded pretty quickly, which is a great credit to them,” Bowden says. But he points out that some new livestock drugs, including ketoprofen and aceclofenac, are also deadly to vultures, and that diclofenac is still used in parts of Europe. RSPB and BirdLife International are pushing for a complete ban of harmful veterinary drugs and better regulation of pharmaceuticals, in Europe and beyond.

In response to rampant drugs and pesticides, some governments across Europe and Asia are creating “Vulture Safe Zones” to shield species of concern. Within these huge areas, there’s a zero-tolerance policy for use of banned or controlled chemical substances that could harm vultures. Officers from environmental departments and drug-enforcement agencies, along with local veterinarians and vulture-monitoring volunteers, are tasked with enforcing the rules. Generally, violators are warned and told to stop using the listed drugs, but officials will sometimes take legal action against repeat offenders.

Last year, the International Union for the Conservation of Nature established the first pair of Vulture Safe Zones in Bangladesh to help protect the critically endangered White-rumped Vulture. The one in the southwest corner of the country covers an area of 17,223 square miles, while the one in the northeast covers 12,218 square miles. SAVE is also working to create Vulture Safe Zones across Asia and also Europe. 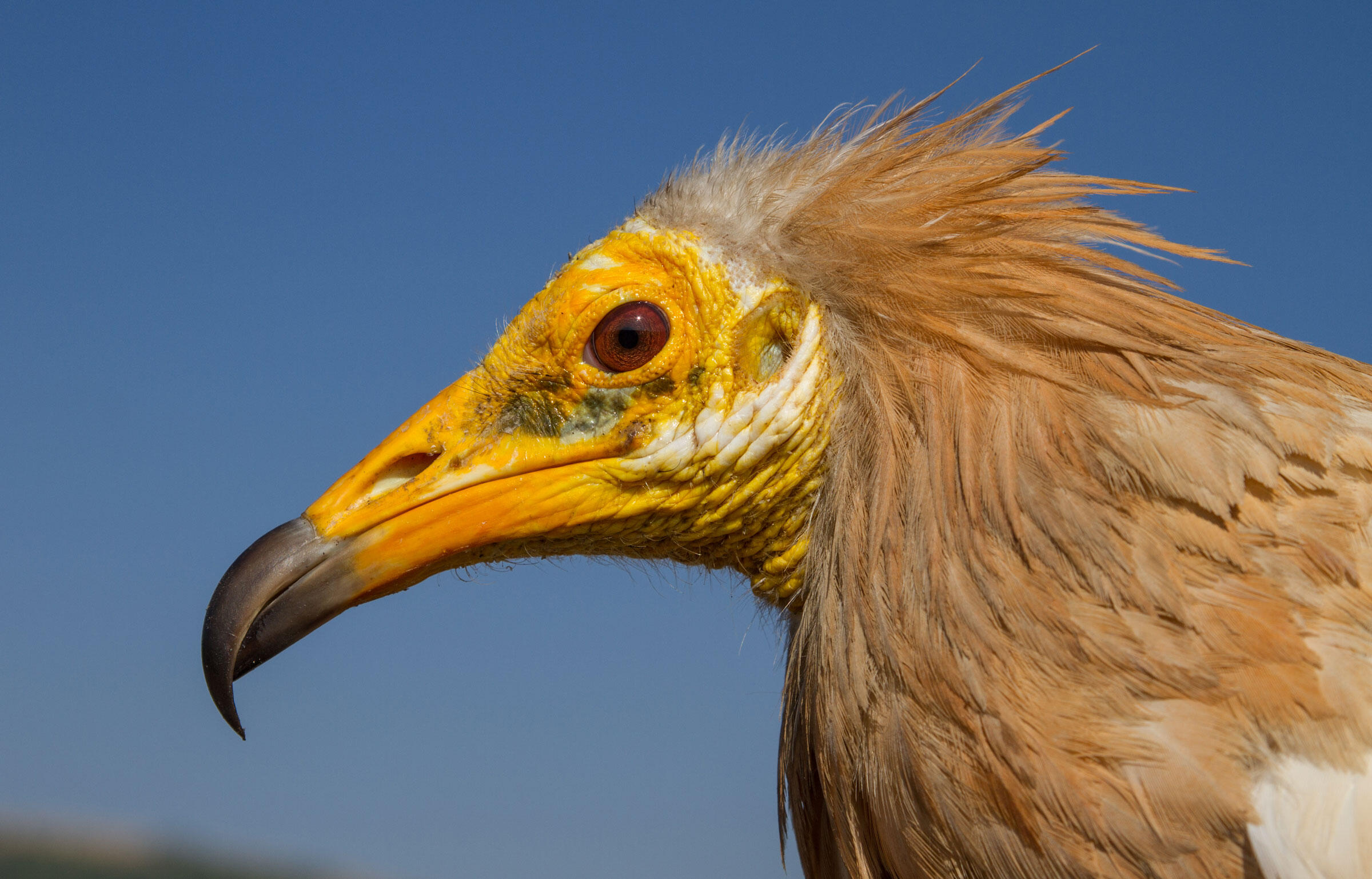 An adult Egyptian Vulture in Armenia. Egyptian Vultures are one of few tool users in the animal kingdom: They pick up and hurl rocks at ostrich eggs to crack them open. Photo: Evan R. Buechley 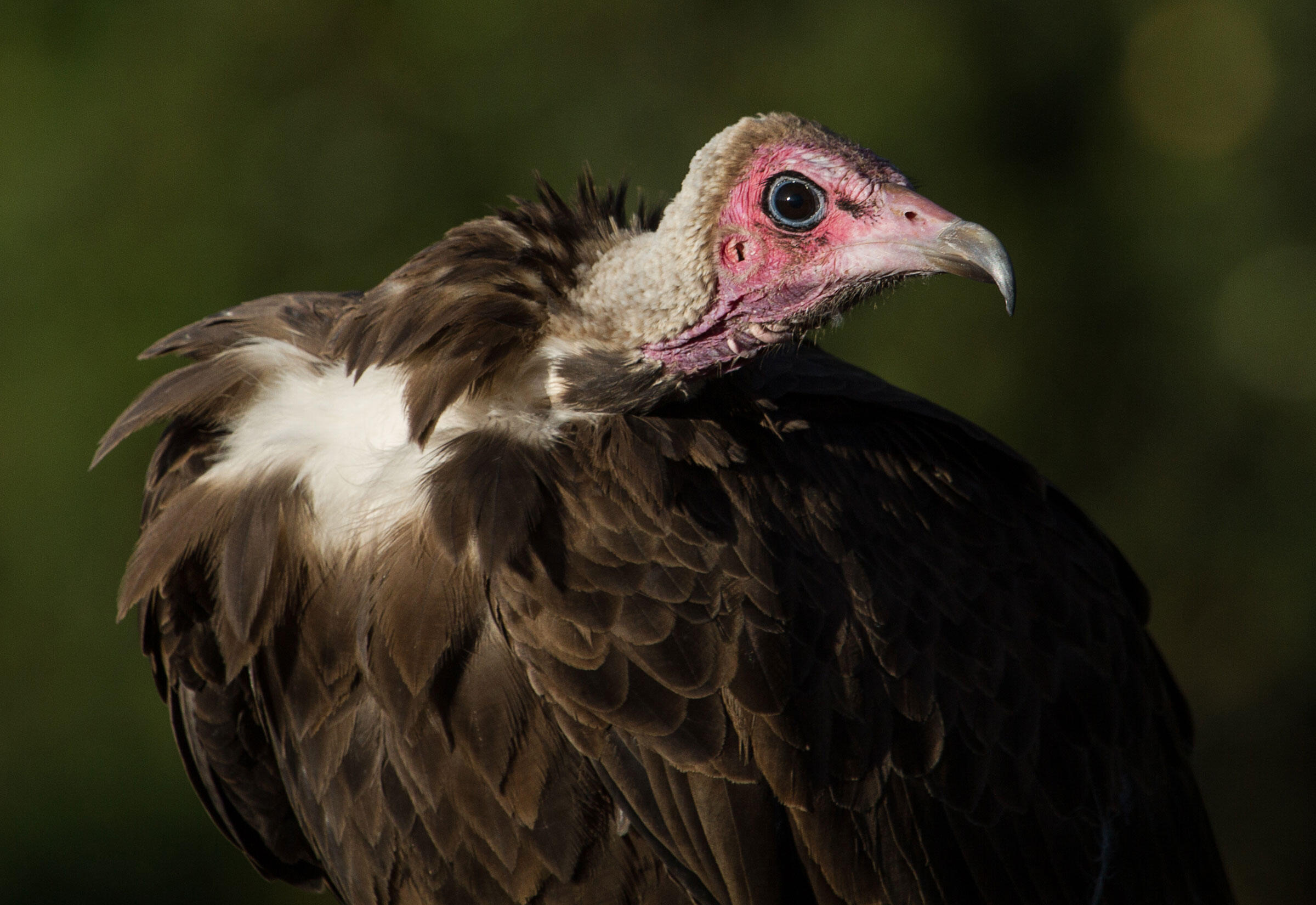 An adult Hooded Vulture in Ethiopia. This once common species was upgraded to critically endangered in 2015 because of drastic declines in populations across Africa. The main cause of death in Hooded Vultures is the poisons in the carrion they eat. Photo: Evan R. Buechley 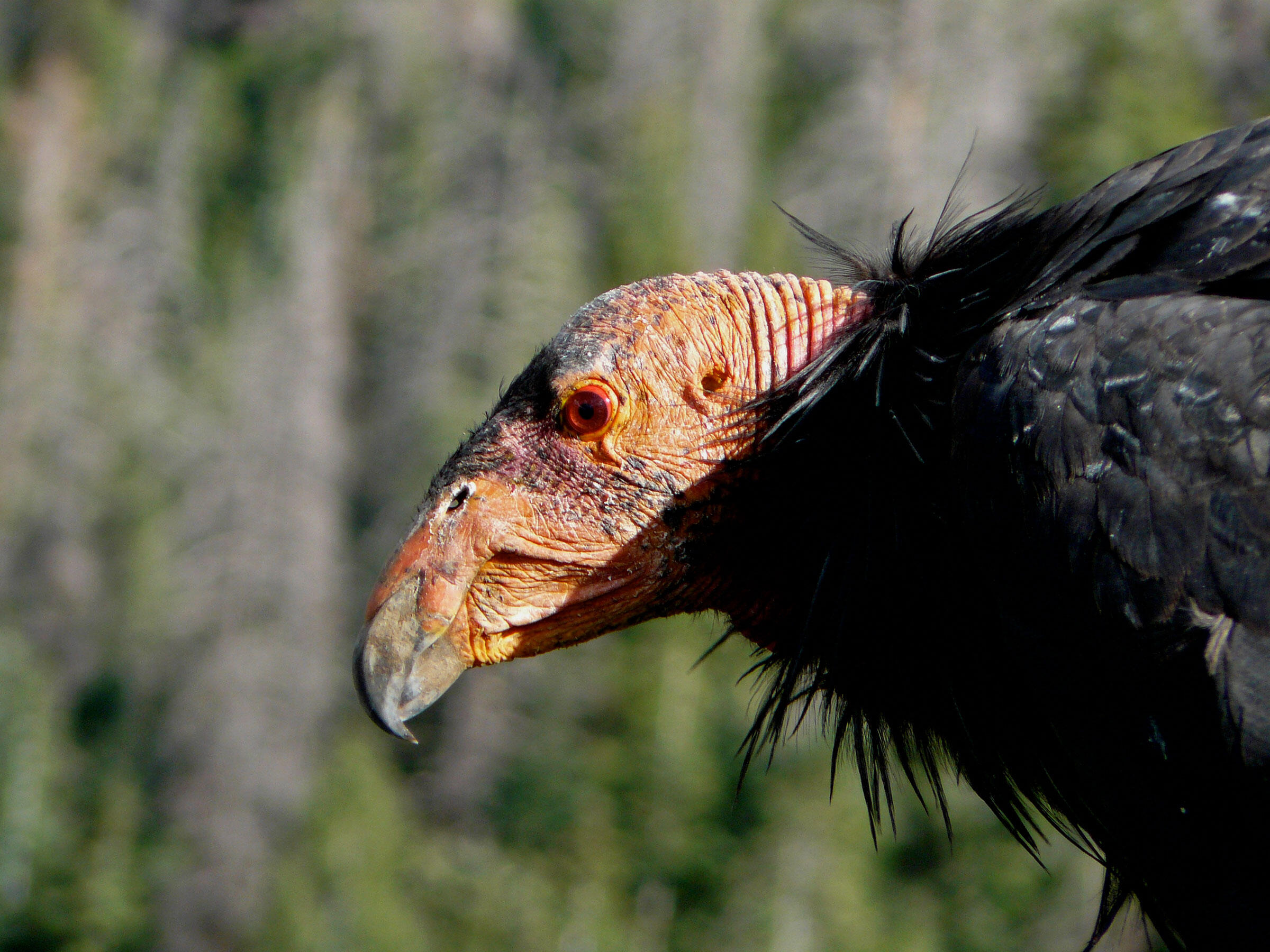 An adult California Condor in the Grand Canyon region of Arizona. The condor population is recovering across North America after reaching a population low of only 22 in the '80s. Photo: Evan R. Buechley 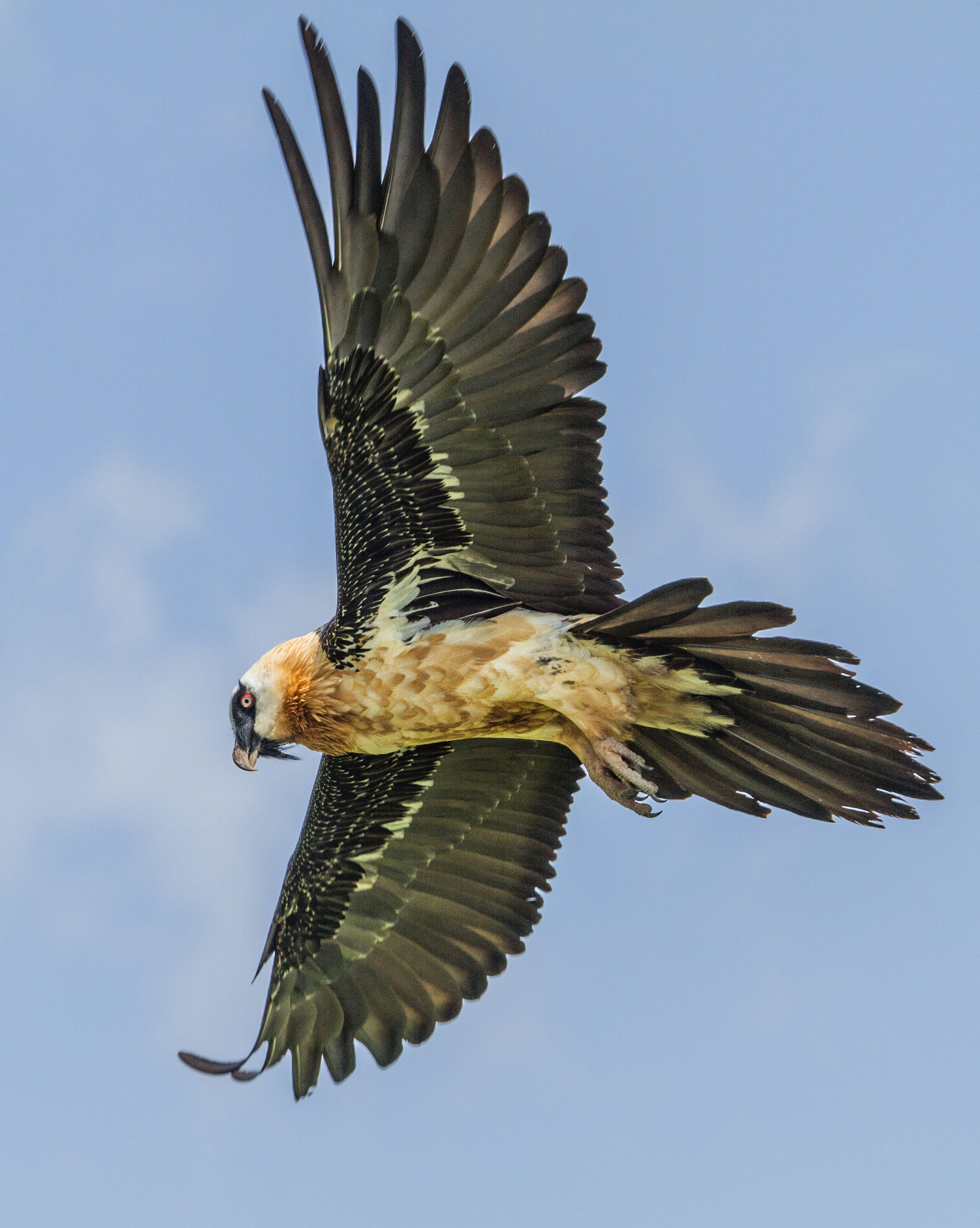 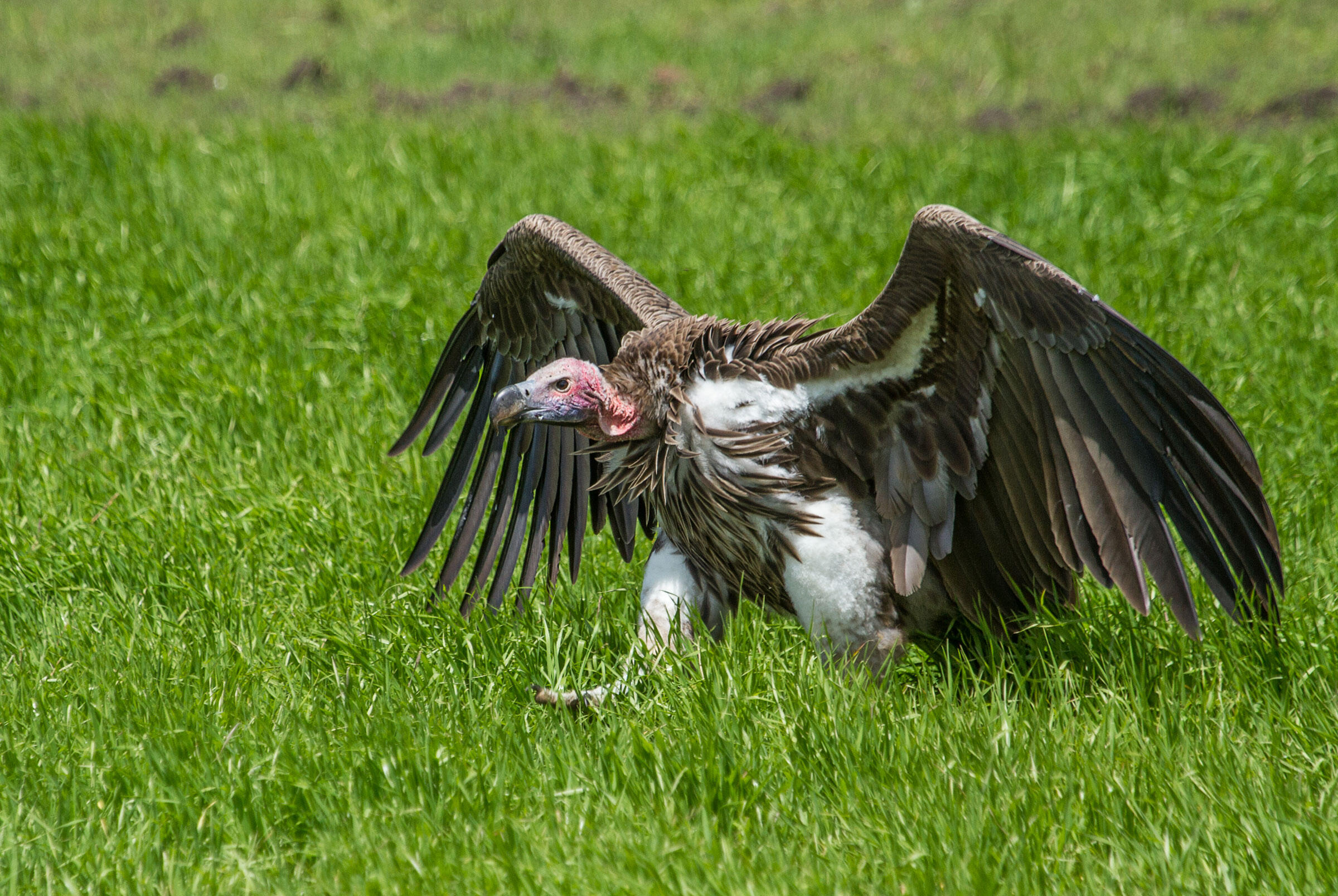 An adult Lappet-faced Vulture in Ethiopia. Regarded as the king of the African vulture community, this species uses its massive bill to rip through tough hides and slice up tendons. They will even fight off jackals for carcasses. Photo: Evan R. Buechley

Vultures are nature’s hazmat service: They eat animal carcasses that—when left untouched—become breeding grounds for disease. Perhaps that’s why humans are starting to come around to appreciate them.

“The same fact that has given them a bad rap—that they eat dead animals—is what makes them so critically important,” says Buechley. “Vultures need our help right now, and in conserving them, we’ll be helping ourselves."