Check Out These Hilarious Entries in the New Duck Stamp Contest

The mandate that submissions include a hunting scene goes away next year. For now, these subversive artists are having some fun. [This story has been updated.] 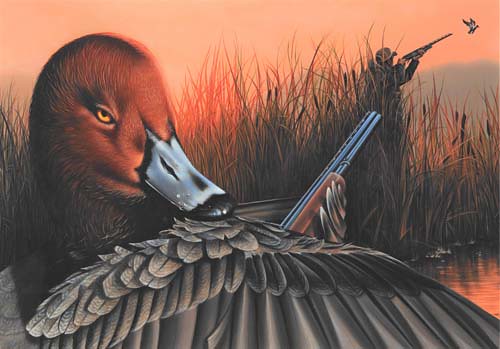 The outgoing rule requires a hunting scene, but it doesn’t specify that the people have to be hunting the birds.

Update September 27, 2021: This story has taken a delightful turn! On last night’​s episode of Last Week Tonight, host John Oliver revealed that his satirical news show commissioned several paintings to lampoon the duck stamp contest's hunting-image requirement. The segment explored the history of the duck stamp contest, and cleared up our confusion about one of the paintings: the two men in a Redhead's embrace, shown below, are rival duck stamp artists Tim Taylor and Rob McBroom. None of the show's submissions made the cut—Jim Hautman's pair of Redheads took the top prize—but Oliver announced that he's auctioning off the paintings this week and donating the proceeds to support wetlands conservation through the duck stamp program.

Last month the U.S. Fish and Wildlife Service announced that it was bringing to an end one of the strangest, and some would say silliest, policies of the Trump era: Starting next year, artists will no longer be required to include hunting images in their submissions to the federal duck stamp contest.

The mandate is still in place, however, for this year’s contest, which will be held this weekend. And artists, as artists are wont to do, are seizing the opportunity to troll the powers that be.

This year’s submissions are currently anonymous so the judges can assess them without bias. But based on a Flickr gallery of contest entries, several artists appear to be saying to the government: You want hunting scenes? We’ve got your hunting scenes right here.

Mixed in with mostly earnest and lovely renderings of waterfowl in their natural habitat, the gallery features some more subversive interpretations of the contest rules, such as a Redhead with a knowing look pointing a shotgun at a duck hunter. Other submissions include a close-up image of a shotgun blazoned across a beautiful painting of a King Eider, and—because why not?—a rendering of Vermeer’s “Girl With a Pearl Earring,” but with what looks to be a Blue-winged Teal in the girl’s place. Another artist painted a Redhead embracing a hunter and, as far as we can tell, a businessman of some sort. 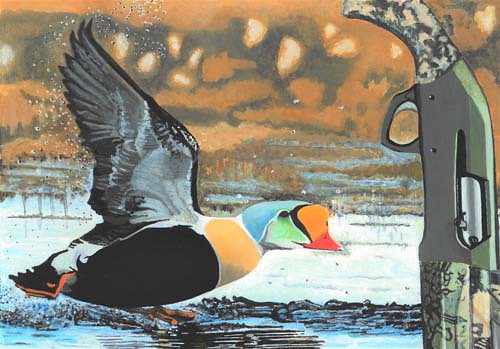 You can’t miss the hunting imagery in this painting of a King Eider.

As Audubon readers well know by now, the duck stamp is not a postage stamp—though stamp collectors do prize them—but rather is a type of permit required to hunt waterfowl. The winning artwork from each year’s contest appears on the following year’s stamp. The tradition is a boon for conservation: Since 1934 duck stamp purchases have raised more than $1.1 billion to acquire some 6 million acres of waterfowl habitat at national wildlife refuges.

Hunters account for the majority of those purchases, but birders and other outdoors enthusiasts also buy duck stamps to support conservation. Past contest paintings occasionally included hunting scenes, since the stamp is, after all, a hunting license. But in 2019 the Trump administration mandated that all entries include a hunting element, and made “Celebrating our Waterfowl Hunting Heritage” the contest’s permanent theme. 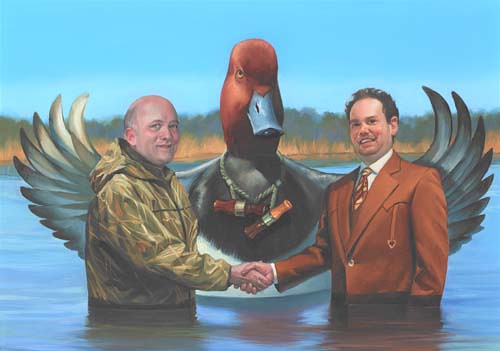 Who are these guys?

Many artists were unhappy with the change, both on a practical level—painting ducks is challenging enough, they said, without having to squeeze in a hunting scene—and because the change could alienate non-hunters, needlessly driving a wedge between camps of conservationists that share the goal of preserving wildlife populations.

In last year’s contest, artists resorted to painting shotgun shells and other elements that looked to many observers like litter marring what should by idyllic nature scenes. The dustup drew wider attention to a contest that had previously kept a fairly low profile outside the wildlife-art world.

Now, it seems, a raft of new artists have alighted upon the contest, putting their impressive skills and irreverent humor to work skewering the pro-hunting mandate. This odd chapter in the duck stamp’s long history may be coming to a close, but their art will live on.