Standing at the entrance of the Washington State capitol building, it looked as though a sea of green was about to flood through the halls at any moment. People congregated on the building's steps donned clover-colored hats, scarves, and jackets while proudly holding up signs that read, “100% Clean Electricity,” “Act for Orcas,” “I Stand Against Oil Spill,” and “#BYOBAG.” The crowd of five hundred climate advocates and activists traveled from all parts of the state to participate in Environmental Lobby Day 2019 on January 29th.

Prior to making the short walk to the capitol building, members of the Environmental Priorities Coalition (EPC), a network of over 25 environmental groups—including Audubon Washington—that influence policy, organized at a nearby unitarian church to strategize for a day full of meetings with state legislators. Though the statewide organizations within the EPC have different conservation priorities, on this day they brought a unified agenda to the state legislature: lobbying for 100 percent clean electricity, orca emergency response, oil-spill prevention, and the reduction of plastic pollution.

Audubon’s primary legislative goal is to pass a new clean energy bill. Only a few weeks into January, the Senate Environment, Energy, and Technology committee held its first hearing on SB 5116, or the 100% Clean Bill. With 17 state senators and 28 representatives in the house now sponsoring the legislation, there is increasing support for the measure.

According to Ben Silesky, state field organizer for Audubon Washington, this was one of the biggest environmentally friendly lobby day’s in state history—47 out of Washington’s 49 districts were represented. 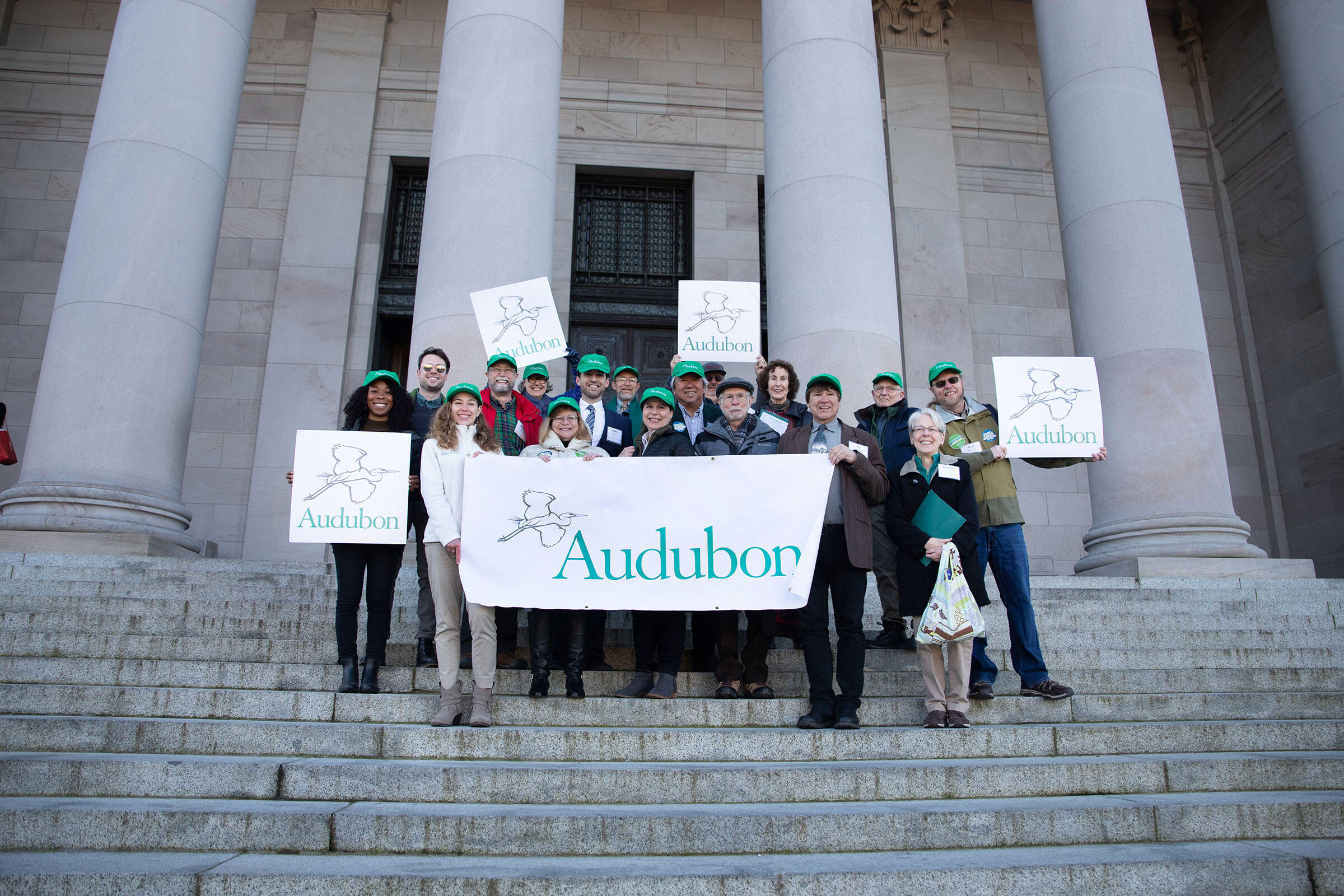 Audubon Washington prepares for a day filled with meetings, hearings, and workshops on the legislative campus. Photo: Dominic Arenas/Audubon

A week before Environmental Lobby Day 2019, Audubon Washington hosted a community action meeting for other nonprofit organizations within the Environmental Priorities Coalition. Silesky initially feared that heavy rain and stormy conditions would deter attendees, but 40 people showed up for the advocacy training.

In his presentation, Silesky informed attendees on the 100% Clean Bill, specific legislators Audubon Washington is engaged with, and how to make an impact during legislative meetings. He also provided guidelines for after-lobby-day actions, including advice on writing letters to the editors and how to talk to legislators on follow-up phone calls.

“To be an effective advocate, especially with legislators that are still on the fence on some of these issues, you need to have two-way communication," Silesky said. "Ask for their opinion and understand their position, thank them for their support if they have taken action on our issues, but also express why this issue matters to you personally.”

Tim McGruder has attended numerous lobby days during his 33 years as an Eastside Audubon member; this year's was his ninth in Olympia and eleventh time overall. Though McGruder is a seasoned lobbyist, he credits the community action meeting for the significant legislative appointments at the capitol.

“It helped bring me up to speed and built upon the details of our conservation priorities this legislative session," McGruder said. “There was a lot of information brought to the table that night. Knowing everything from where legislators stand to how to conduct a phone call with representatives is super important because they need to hear from their constituents.”

In addition to attending meetings with representatives and state senators from his own 45th district, McGruder and fellow Eastside Audubon Society member, Maureen Sunn, went to legislative appointments on behalf of colleagues. All of their hard work paid off.

A week after Environmental Lobby Day, the House committee for Environment and Energy passed the bill that establishes a 100 percent clean energy standard and strong workforce protections. The bill has since been voted out of the Ways and Means committee and is moving onto the Senate floor. Both the House and Senate versions of this bill are moving quickly, but will need to be reconciled before becoming law.

Due to the actions of people like McGruder and the hundreds that painted the capitol green, the momentum this legislative session is high. All it takes, according to McGruder, is making a level of connection with legislators.

"Show them why clean electricity, reduction of plastic bags, birds, or whatever issue you are advocating for, matters,” McGruder said. “Lobby days may seem intimidating but it’s important to keep in mind that legislators will listen to your stories if you make it passionate and personal."

To avoid the worst consequences of climate change, states need to push for carbon taxes like Washington's I-732—and they need them to pass.

The Congressman from South Florida has introduced his own carbon tax, a political compromise that aims to reduce emissions on a national scale.

An Easy Way to Power Your Home With Renewables, Even If You Rent

In many states, you can direct your utility to buy your electricity from renewable sources—a climate-change action requiring no lifestyle changes.