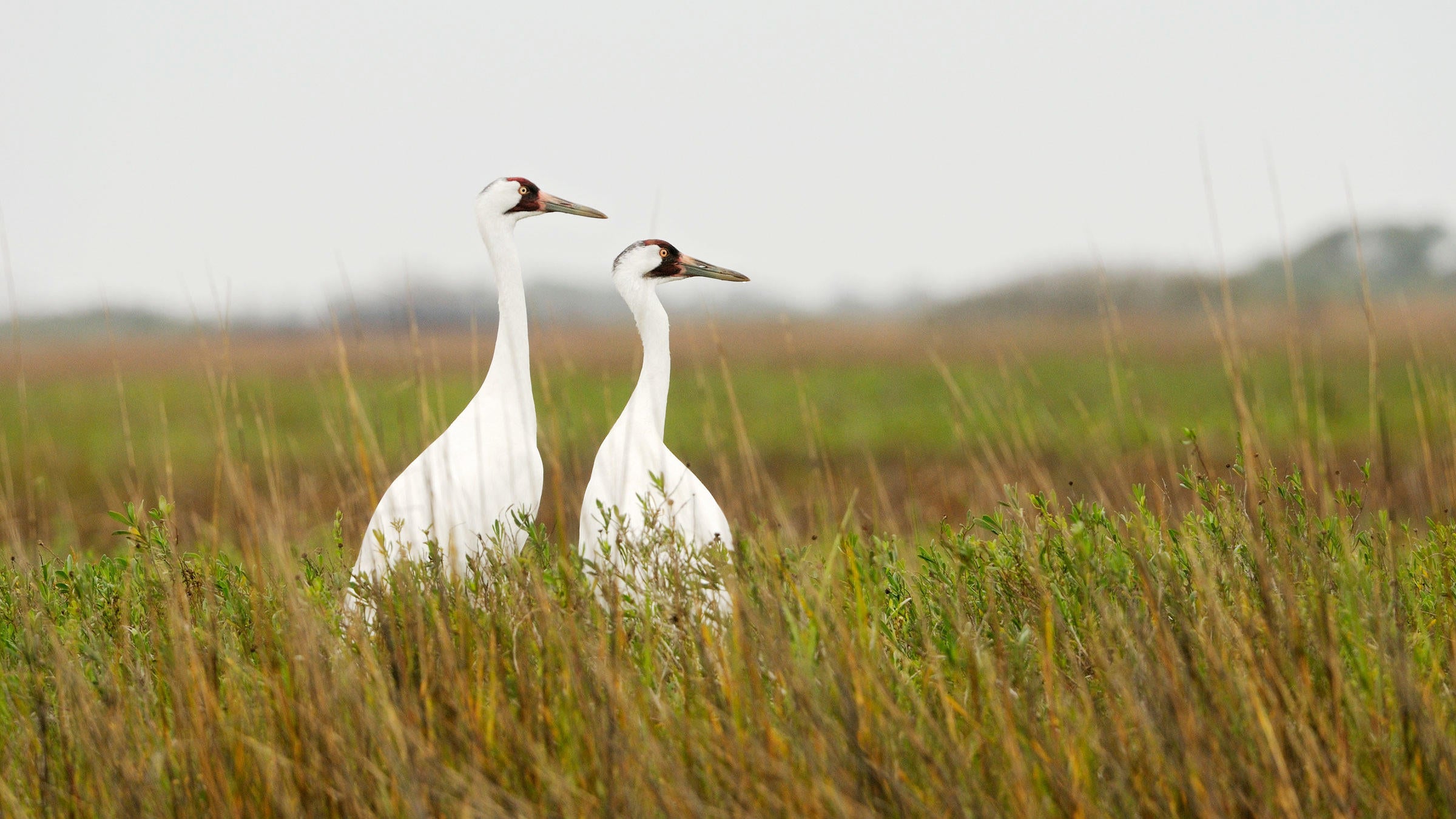 As a curious teenager, Mary Bomberger Brown always looked forward to April, when she’d watch large shadows gather in the evening sky and assemble themselves on the Platte River in central Nebraska: some 500,000 Sandhill Cranes making their way north to breed in Canada. Occasionally, a few extra travelers would grace the brownish-gray flock. “You would see little groups of these great big, white birds, The Whoopers," Bomberger Brown recalls fondly. "It was an extra little treat to see the lovely, elegant creatures."

But that was the late 1970s, and since then something has changed. After decades of counting on Whooping Cranes to stop in Nebraska in April, Bomberger Brown, now a shorebird researcher at the University of Nebraska, noticed their earlier arrival about five years ago—as early as March. Their fall migration timing seemed to change, too. Rather than passing through in October on their way to the Gulf Coast, they visit in November. "It's just one of those patterns you start to notice if you're out enough," Bomberger Brown says.

So when Joel Jorgensen, a biologist with the Nebraska Game and Parks Commission, contacted her about collaborating on a study about Whooper migration, she was all ears. Jorgensen has worked with Whooping Cranes for nearly 12 years, and he, too, had noticed a shift in their migration. Acting at times as a caretaker for the birds, he says he needs to know when exactly they will touch down so his team can be ready to care for the critically endangered, wild population of around 300 birds.

“Anybody who works with Whooping Cranes in the Central Flyway knows that their migration has changed,” he says. But no one had published an official study on the topic. So the pair took it upon themselves to confirm their hunches. They analyzed data from the Cooperative Whooping Crane Tracking Project, run by the U.S. Fish and Wildlife Service, that includes all confirmed Whooping Crane sightings in the Central Flyway between 1942 and 2016—a total of 2,806 observations. Combined, these observations tell the story of the population’s migrations between their Canadian breeding grounds and wintering areas along the Gulf of Mexico. The database showed them where birds were at a given time, and indicated when a mass exodus took place. The duo then compared these changes to average monthly temperature data from the U.S. National Oceanic and Atmospheric Administration. The work was published last month in Waterbirds.

The results are striking: Over the past 75 years, Whooping Cranes' migration window has expanded by six weeks. The birds gain three weeks on either end of the migration. They began their northbound spring migration in 2016 approximately 22 days earlier than they did in 1942, while their southbound fall migration started approximately 21 days later.

Average temperatures in the Central Flyway during spring increased during the same period, which points to a link between climate change and crane migration. “For a long time, ornithologists thought that they primarily migrate with day lengths,” Bomberger Brown says. But days haven’t grown longer in the past 75 years. “They seem to be responsive to temperature,” she says. In the fall, though, there was no temperature trend, a possible artifact of available data, the authors suggest.

It’s not clear what effect these changes in migration timing will have on the critically endangered population. “At this point in time, we can't say that some of these changes that are occurring and related to changes in temperature are necessarily bad,” Jorgensen says. “But I don't think it's all going to be positive.”

How Will Climate Change Affect Your Favorite Birds?

Audubon's Birds and Climate Report, published in 2014, projected the future ranges of over 500 North American bird species under warmer temperatures expected in the future. Find out how your favorite species—maybe Common Loon, Mountain Bluebird, or Brown Creeper?—might shift its range with the climate. Click here.

There are potential benefits to longer nesting periods in the summer. Chicks have more time to eat food and develop after their birth. Given more time to grow, the young Whooping Cranes may be better prepared for fall migration, increasing their chances of surviving into adulthood.

But if they migrate north before their breeding habitat is ready for them, there may not be enough food when they arrive. Anne Lacy is a research coordinator at the International Crane Foundation, an organization that helps monitor Whooping Cranes on their migrations to and from Canada, but they can only do so much; the team and the cranes rely on natural resources. And then there are the harsh midwestern winters, which the birds were more likely to avoid when they waited until April to migrate. “Snow storms in late March in Nebraska are not uncommon,” Lacy says. Cold weather can stress the birds, and snow can make finding food difficult.

Bomberger Brown and Jorgensen’s findings can’t help Whooping Cranes avoid all potential harms from earlier or later migration time, but they can help conservationists. Now armed with concrete facts, those working with the cranes can be better prepared in monitoring the birds and warning people and recreational hunters in the migration area not to disturb them.

And because they are so conspicuous, tracking Whooping Crane migrations can help other bird species by providing clues into how and why migration times are changing. Birders and scientists have noticed that other birds, including Sandhill Cranes and a suite of songbirds, migrate earlier in the spring and later in the fall, too.

“How well Whooping Cranes are able to do with this changing climate may tell us or give us an indication of how some of the other species might be doing as well,” Bomberger Brown says. “They're doing the best they can to accommodate themselves and to respond to the environment.”

Yet Whooping Cranes aren’t just an indicator species; they are one of the most prized birds in North America. In 1940s, the population shrunk to fewer than 20 birds due to habitat loss and hunting by early settlers. Thanks to captive breeding, there are about 600 Whooping Cranes today, including more than 300 individuals in the last wild, migratory population (the Aransas-Wood Buffalo population). If habitat can't keep up with the species’ changing migratory schedule, they might require even more human help to survive.