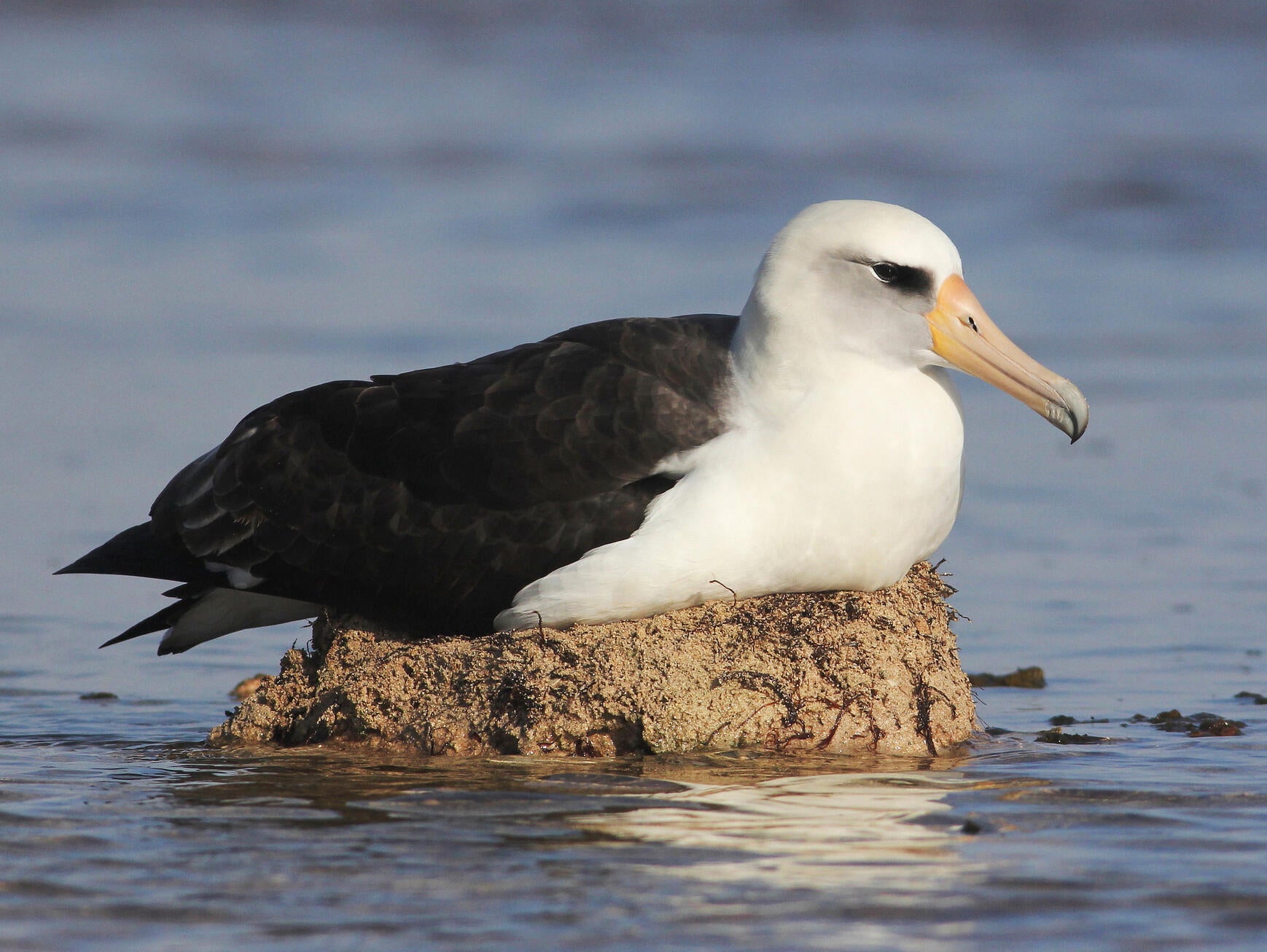 An incubating Laysan Albatross watches the lake level rise, near Papahānaumokuākea Marine National Monument, Hawaii. This nest flooded, and the egg was abandoned, days after the photo was taken in January 2012. Photo: Cameron L. Rutt

Bigger storms caused by rising seas will flood seabird nests long before their colonies are actually submerged—and albatrosses may be too stubborn to adapt.

The winter of 2011 was a bad one for seabirds nesting at Midway Atoll, a remote spread of islands in the central Pacific. First, two big storms, hit, in January and February, causing large waves to flood the islands. Then in March the islands were washed over by the Tōhoku tsunami (the same wave that caused Japan's Fukushima Daiichi nuclear disaster).

The tsunami wreaked havoc in Midway too: All told, nearly 300,000 albatross nests were destroyed, along with the nests of many other seabird species. "From the storms, there was a lot of nest loss, a lot of eggs that were lost, and young chicks that were lost," recalls Karen Courtot, a wildlife biologist with the U.S. Geological Survey who monitors Midway's seabirds.

Courtot studies how sea level rise will affect these birds, and for her, that winter’s destruction drove home how flooding from big storms will threaten nesting seabirds even before rising seas swallow their islands.

Midway Atoll is one of the biggest seabird colonies in the world. There, 19 seabird species, including 75 percent of the world's Laysan Albatross population, gather to breed. The islands’ more than 1,500 acres does not mean they are safe—“[the atoll is] actually quite vulnerable to sea level rise," Courtot says. The islands are low-lying, averaging 3.2 meters in elevation, and sea level at Midway is rising at a rate of 5 millimeters per year—faster than the global average—which makes the impact of storms all the greater. Courtot and her team "wanted to look closer at what species would be most vulnerable," she says.

To do so, they built an extremely detailed computer model of Midway and its birds. First they flew a plane equipped with LIDAR instruments that could collect high-resolution elevation measurements over the island. They combined this data with seafloor maps to create a 3-D model. Then they filled in their model ocean with decades of storm wave data, and drew in thousands of GPS-located nests of three species that nest on Midway's ground during the winter: Laysan Albatrosses, Black-footed Albatrosses, and Bonin Petrels.

Once their model was built, they could see what parts of the islands—and which bird species—would be swept away by the fierce waves of winter storms. The model shows that rising waters alone present little threat to nesting birds in the near future—when sea level increases by 1.5 meters, less than 10 percent of any given nesting habitat will be submerged. But the threat of winter storms hastens the danger. In their model, after 1.5 meters of sea level rise, storm waves washed out 25 percent of Midway Atoll's land area, taking 40 percent of ground nests (as well as 20 percent of grass nests, and 15 percent of tree nests). And after 2 meters of sea level rise, storms flooded more than half of the land area, washing out 60 percent of the nests—affecting more than 600,000 breeding albatrosses and petrels, which is equal to about one-quarter of their Midway populations. While it’s still unclear exactly when sea level will reach these heights, according to NASA, scientific estimates confirm that we’ve already committed to nearly one meter of rise, at least.

All of which adds up to trouble for the birds—and soon. "When you include the storm wave piece on top of the sea level rise piece, the impacts happen a lot earlier," says Nat Seavy, research director of bird conservation non-profit Point Blue (he was not involved in the research). "And sea level rise is happening even faster than predicted, which means that these impacts will happen even sooner."

Bird species that nest during winter storm season—Laysan Albatrosses, Black-footed Albatrosses, and Bonin Petrels—face the most trouble. Unfortunately, these are also the species that are least able to adapt. Albatrosses and Bonin Petrels stubbornly return to the same nesting place year after year, no matter how many times their nests there fail. As long as an island looks safe at the beginning of the breeding season, the birds will try, only to be flooded out a few months later. For instance, at Whale-Skate Island, a now-submerged island in Hawaii's French Frigate Shoals, storms swept away albatross nests, season after season, for decades. Despite this, the birds kept returning, and didn't relocate until the island became completely submerged, in 1999.

This persistence may have once helped albatrosses and petrels survive, but now "it could be one of their downfalls," Courtot says. They cannot perceive when their preferred nesting habitat has gone bad—a phenomenon called an evolutionary or ecological trap.

Fortunately, albatrosses live for a very long time—upwards of 50 years—so they will have many opportunities to breed as this scenario plays out. (The birds’ long lifespan may mask a population decline for a little while, Courtot warns, though there won’t be enough young birds to replace their aging parents.)

Even if the birds abandon Midway, they’d need to find a safer nesting habitat to retreat to, on higher ground. Unfortunately, in the Pacific, much of this land has been overtaken by introduced predators, including rats and other mammals, which make successful nesting untenable. To get around this, researchers are already testing predator-proof fences that could provide the birds safe nesting areas in these locations.

Of course, for these measures to have a chance of working, some brave birds will first have to overcome millennia of evolutionary programming to make the decision to move on from these doomed islands—or else they, too, could fall victim to the rising seas.