The final mixture of vodka, vermouth, and Oregon grape juice to make a purple martin-i is poured into a glade at Seward Park's Restoration with a Twist event on July 28. Photo: Grant Hindsley

On a recent hot Saturday in Seattle, a group of volunteers gathered in a sunny meadow at Seward Park. Dividing up into smaller groups, they knelt in the grass and began exposing thin saplings—Douglas fir, butterfly bush, Indian plum—all tagged with checkered flags and all surrounded by weeds. Chatting among themselves, and with the promise of some boozy rewards in their near future, they set to work.

The volunteers had gathered at Seward on July 28th for the second in a series of events called Restoration with a Twist. Put on by the Seward Park Audubon Center, the series is funded by a grant gifted from Audubon’s Coleman and Susan Burke Center for Native Plants and designed to bring young professionals together for an unusual combination of attractions—hands-on conservation followed by a foraged-cocktail happy hour.

While the restoration work revolved around removing weeds, each cocktail session in the series is focused on different forageables. July’s theme was fruits and berries, and the previous session in June focused on blossoms and leaves. Upcoming sessions planned for August and September will focus on nuts and seeds, and roots and barks, respectively.

So, with songbirds singing in the background and fledgling Bald Eagles practicing their swoops overhead, the volunteers began taking out any weeds that could choke out the little trees. While it’ll take years before the restoration work is completely finished, on Saturday the labor went quickly and before long the group was finished.

Then it was time for a little celebrating.

The event attracted 24 attendees and was led by the Seward Park Audubon Center’s lead naturalist, Ed Dominguez. Also working alongside the volunteers was development director Charley Wilkinson, who thought up the series as a way to experiment with nurturing human connections while also helping restore Seward's ecosystem. 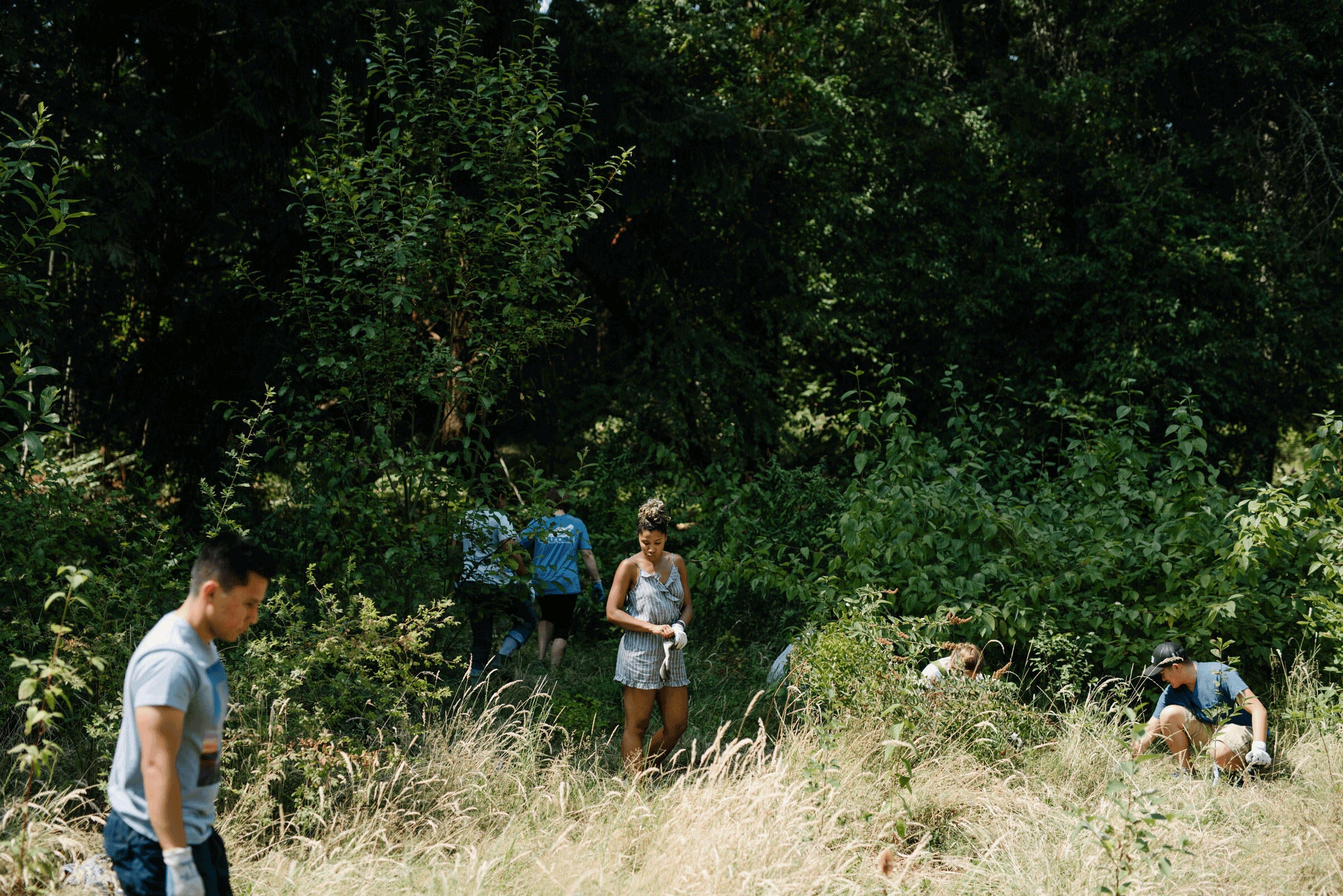 Participants remove weeds from a section of Seward Park where they hope to restore the forest. Photo: Grant Hindsley

"Birds 100 percent rely on native plants,” Wilkinson says. When native plants go away, she explains, bird populations often start to decline or change. “So for us here, in this little green jewel in an urban area, keeping the native plants here is really, really important.”

At the restoration site, for example, was a wall of invasive, thorn-studded Himalayan blackberry. This invader is notorious for choking out the native plant communities, and staff and volunteers at Seward Park have been working for years to beat it back and help the forest trees regrow.

With their work complete, the group marched back to The Eagle’s Nest—a meeting room back at the center filled with books, stools designed to resemble red-and-white capped mushrooms, and 18 stuffed ducks. Waiting for them were Dea Allgood and Heidi Bohan. Allgood and Bohan are the creators of The Foraged Cocktail, a mother-daughter collaboration that teaches people about how to use foraged plants in cocktails.

"We're very excited to work with the Audubon Society to expand our mission, which is to connect people to plants in a way that they may have not experienced before,” says Allgood, the daughter. “It gives us a way to access a different audience that might not be interested in native plants." 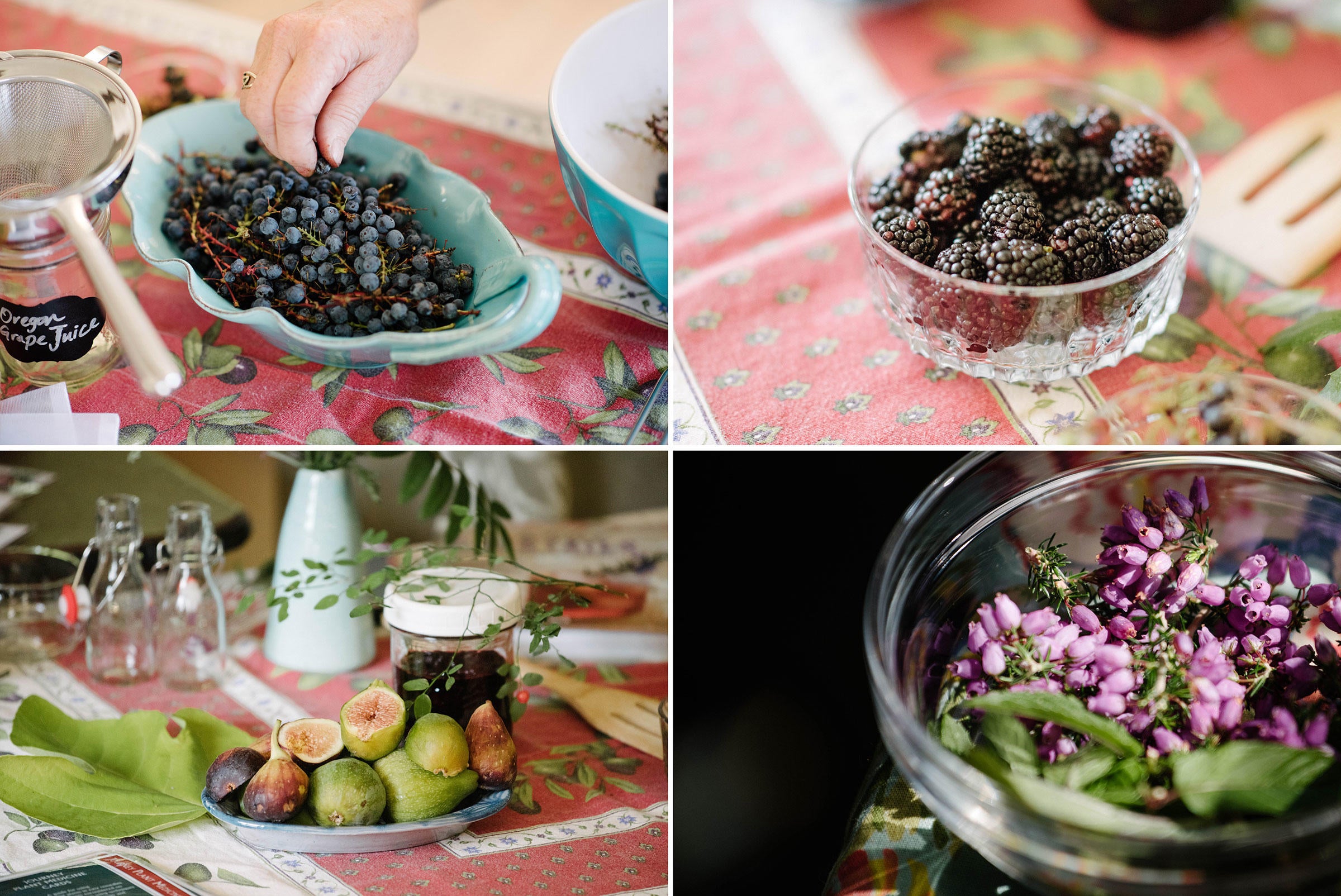 As the volunteers gathered around, the pair showed off plants that summer hikers or foresters might find in the Pacific Northwest, such as the tart Oregon grape and blueberry-like huckleberry, and showed the group how to turn them into juices or drinking vinegars.

Becky MacPherson, a local artist, attended the event with her sister, a forager, to learn more about the importance of native plants. “I’m really interested in it, but I don’t know a lot,” Macpherson says. “So I did learn a lot today.”

Of course, the pair also partook of the cocktails, where they also picked up some new facts. “I learned that the Oregon grape is edible,” MacPherson continues. “And I also learned that the snowberry is technically edible—but not very palatable.”

While everyone sipped their drinks, Bohan spoke about the plant uses in traditional Native American cuisines and medicine. An ethnobotanist, Bohan hopes her work might help revive interest in native plant knowledge and help build people’s confidence in their foraging abilities. Cocktails—with their culture and storied history—are a way to catch people’s interest, she says. "It's a cool way to bring people in who may not necessarily want to go out and forage and make a salad."

Afterward, the participants had a chance to relax, chat, and hang out while trying their own hand at bartending. After an hour or so, the event wrapped up and the participants set out back into the park and world beyond.

Thinking about the future, Wilkinson says that she hopes that the day’s participants will want to come back and get involved with more Audubon activities. A good sign: After just the second event in the series, they’re already seeing repeat visitors.

“I think we're trying to grow our tent a little bit this year and include young professionals in that tent,” she says.

More than that, though, Wilkinson hopes that this can become a place for peers to make new friends, develop new skills, and make their mark in a venue beyond the office or workplace.

“Giving them opportunities to be leaders, I think is really important,” she says. “I see that in my own life, places where people recognize your skillset and your value and ask you to come be a part of something.”