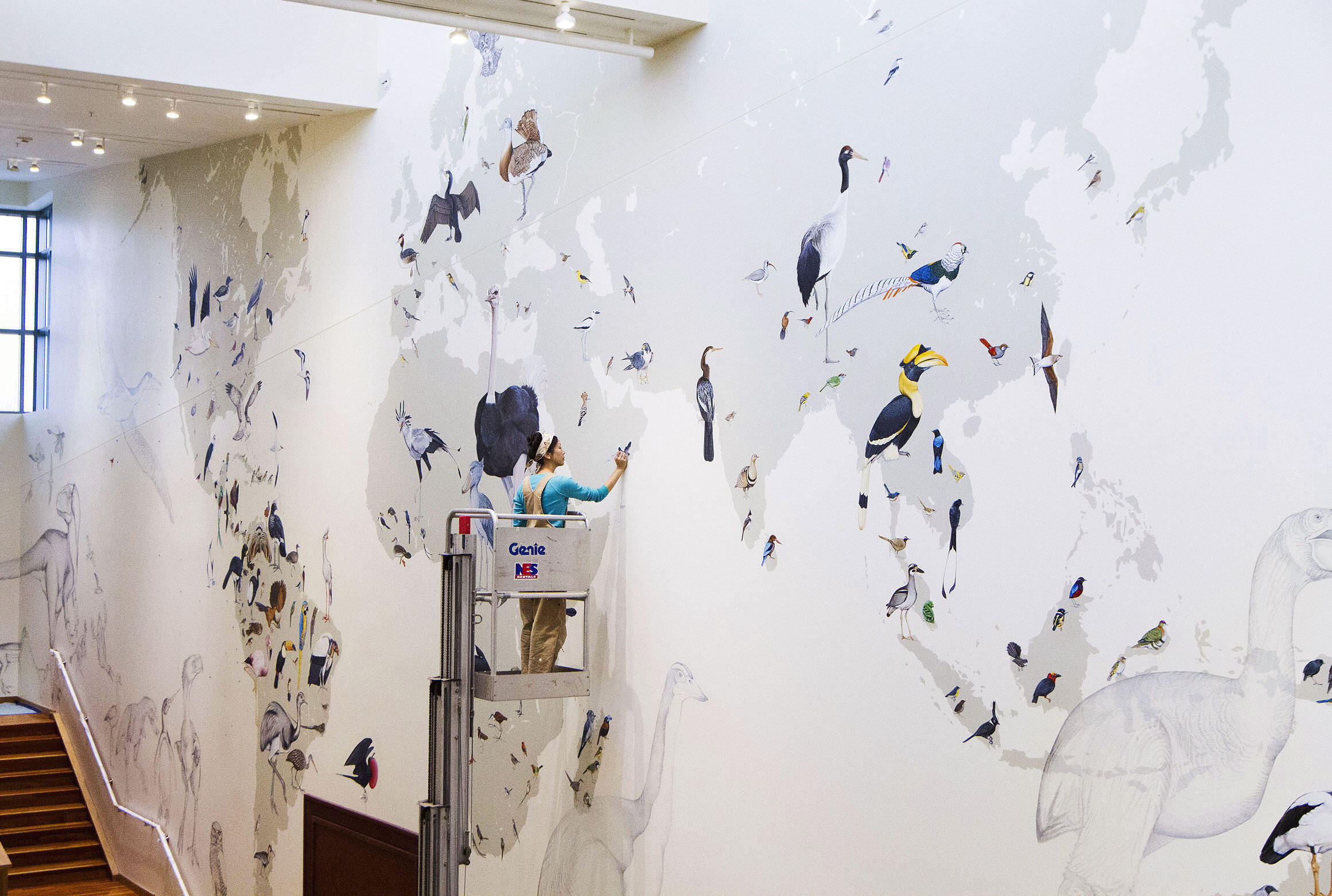 Artist and illustrator Jane Kim at work on the Cornell Lab of Ornithology's newest mural, "From So Simple a Beginning: Celebrating the Evolution and Diversity of Birds." Photo: Courtesy of Ink Dwell

If there was ever a Sistine Chapel for worshipping birds, it would be the Cornell Lab of Ornithology. Based in Ithaca, New York, the sleek wood-and-steel structure houses labs for 250 professors and students, sound recordings of more than 165,000 birds and beasts, and a glass observatory where visitors can peek through scopes into Sapsucker Woods to spot real-life birds.

Now, this avian Vatican also has its own Michelangelo: This week San Francisco artist Jane Kim put the finishing touches on her 40-foot-tall, 70-foot-wide mural of every living family of bird in the world. The 34-year-old illustrator, who runs a studio called Ink Dwell with her business partner Thayer Walker, spent 16 months on the project—weekends included. “I haven’t really had a life since this began,” Kim says. “This was more passion-driven than practicality-driven.”

With only the aid of a scissor-lift and the occasional assistant, Kim hand-painted 270 birds onto shadows of all the continents—the birds' locations are set near their evolutionary birth places. The Saddle-billed Stork, for instance, has one foot planted firmly in southwest Africa, while the Great Spotted Kiwi squats down in New Zealand.

The final, life-size renderings, which have the look and feel of an illustrated science textbook—one of Kim's favorite things to read when she was a child—were each drawn at least four times between the initial sketches and the final products. The paintings are based off of the artist’s well-researched collection of photos, videos, feather specimens, and—in the case of extinct birds—fossils kept by the Black Hills Institute of Geological Research in South Dakota. Kim drew five extinct birds (the elephant bird, dromornis, sylviornis, North Island Giant Moa, and adzebill) as outlines to emphasize their ghostlike nature. “Species die out all the time. Evolution doesn’t ever stop,” she says. “This mural is a frozen point in time." 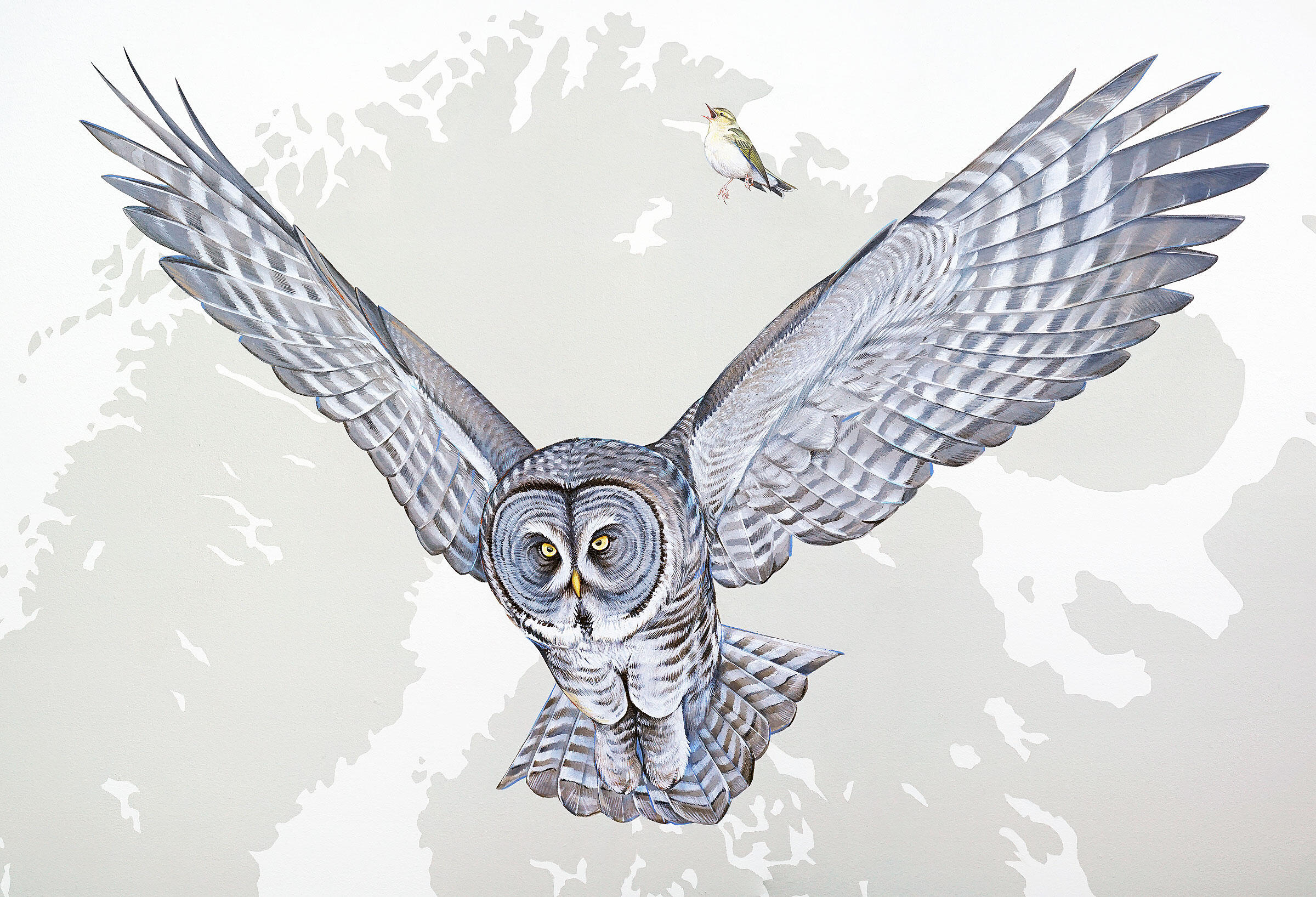 The mural, called "From So Simple a Beginning: Celebrating the Evolution and Diversity of Birds,” takes up the east wall of the lab and spans 375 million years of evolutionary history. The corridor, which leads to the lab’s auditorium, is also home to another piece: James Prosek’s “Wall of Silhouettes,” which depicts birds as black faceless shapes with matching numbers, just like a field manual from the early 20th century. (It was completed in the spring of 2014.)

“I love the marriage of these two murals,” Kim says. “We both have an idea that birds can be identified in their basic shapes. And it’s nice to have color and silhouette in contrast.”

The murals have another feature in common: Neither names its subjects. The key for the Prosek mural is available on request from the lab’s staff; Kim’s will exist as an interactive digital catalogue—a magnified map of the paintings paired with biological facts and audio clips. Still, Kim doesn’t think the mural needs any classification. “Labels are things we’ve created so we can categorize nature,” she says, “but nature doesn’t work that way.”

A former intern at Cornell, Kim has always been interested in merging science, curiosity, and creativity. Even before graduating from the Rhode Island School of Design, she used to draw bears on the walls of her childhood bedroom outside Chicago. She has since gone on to paint giant fish at the Baltimore National Aquarium, Burrowing Owls at Facebook’s headquarters in Menlo Park, California, and bighorn sheep on the sides of a motel near California’s High Sierras. Her style is highly literal—there are almost no abstractions in her illustrated work. 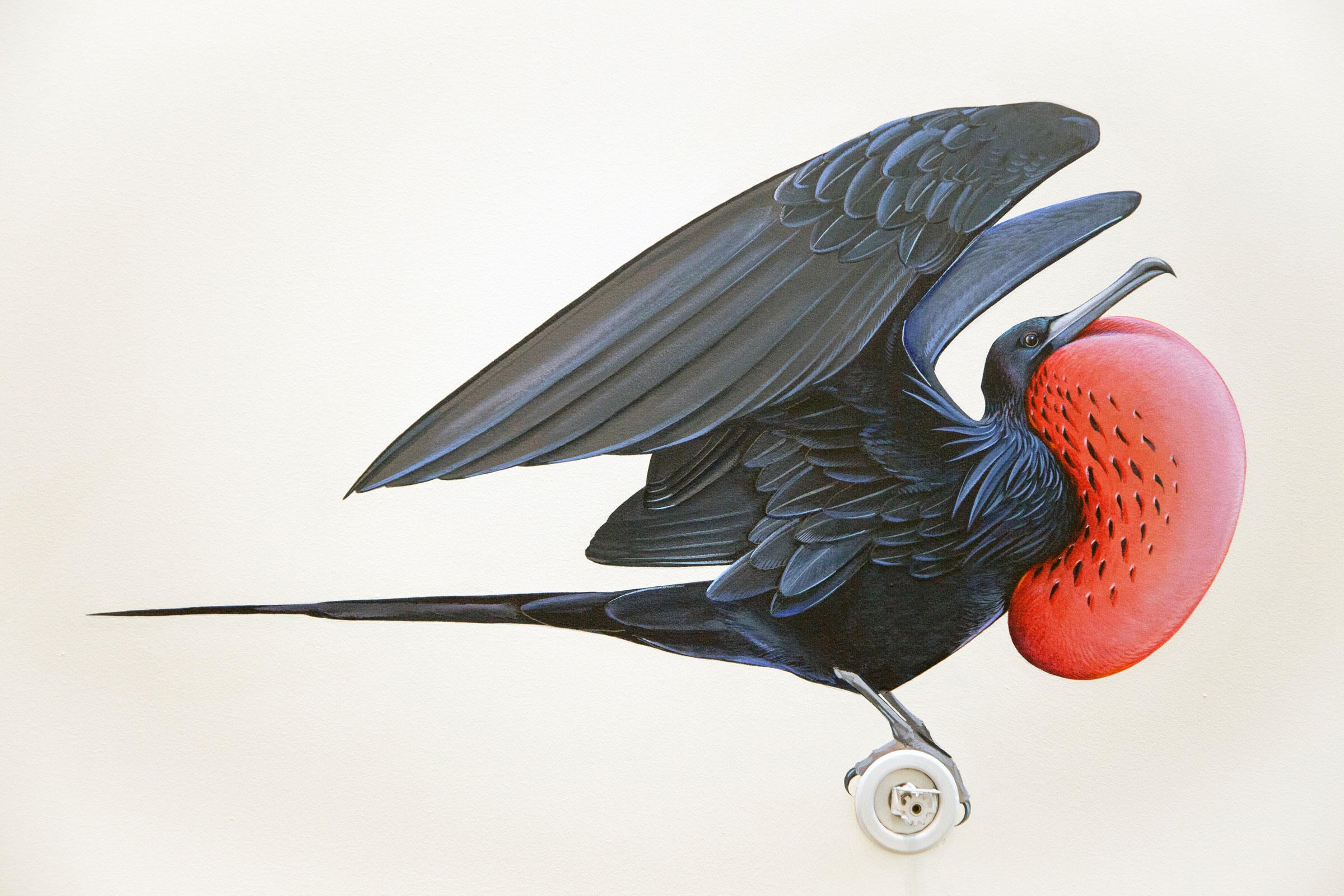 Nonetheless, imitation can be challenging. The nine-foot Ostrich in the Cornell mural was a battle for Kim, and she had to work relentlessly to hone the subtle yellow streaks under the Cassowary’s bill. But the hardest part of the project, Kim says, was spending so much time inside (the lab does have a sound system that streams in songs from the natural aviary beyond its windows, but it's not quite the same).

Kim believes that nature itself is “the greatest artist,” and wants her murals to always point outward to the world. As people walk into the lab, she hopes they dwell on her birds, and, maybe, change their attitude toward the environment. It’s a way for her efforts to endure, even after she and Walker have moved on to new conquests. “The mural is done,” Walker says, while he and Kim prepare to leave Ithaca, “but it’s really just coming to life.” 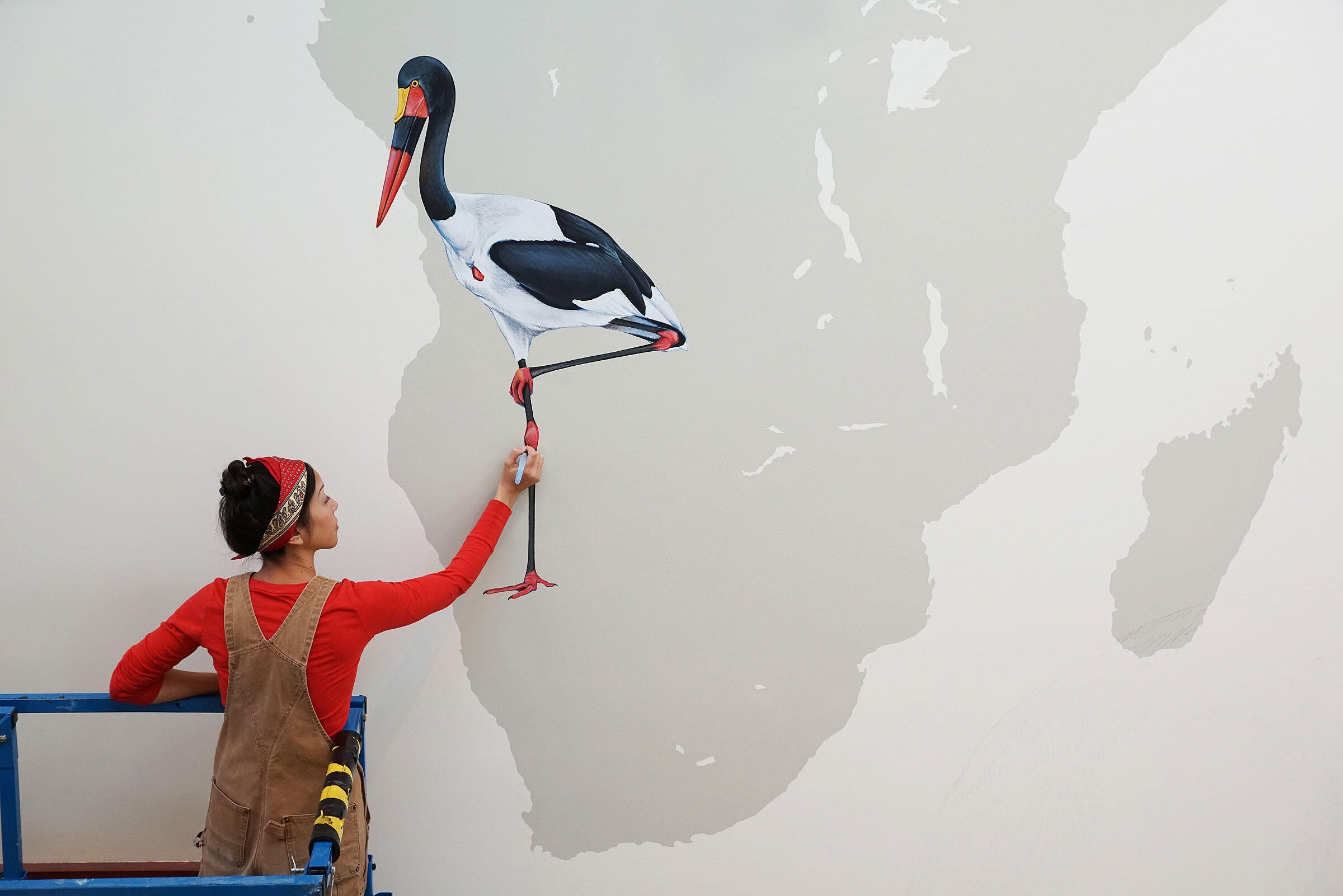 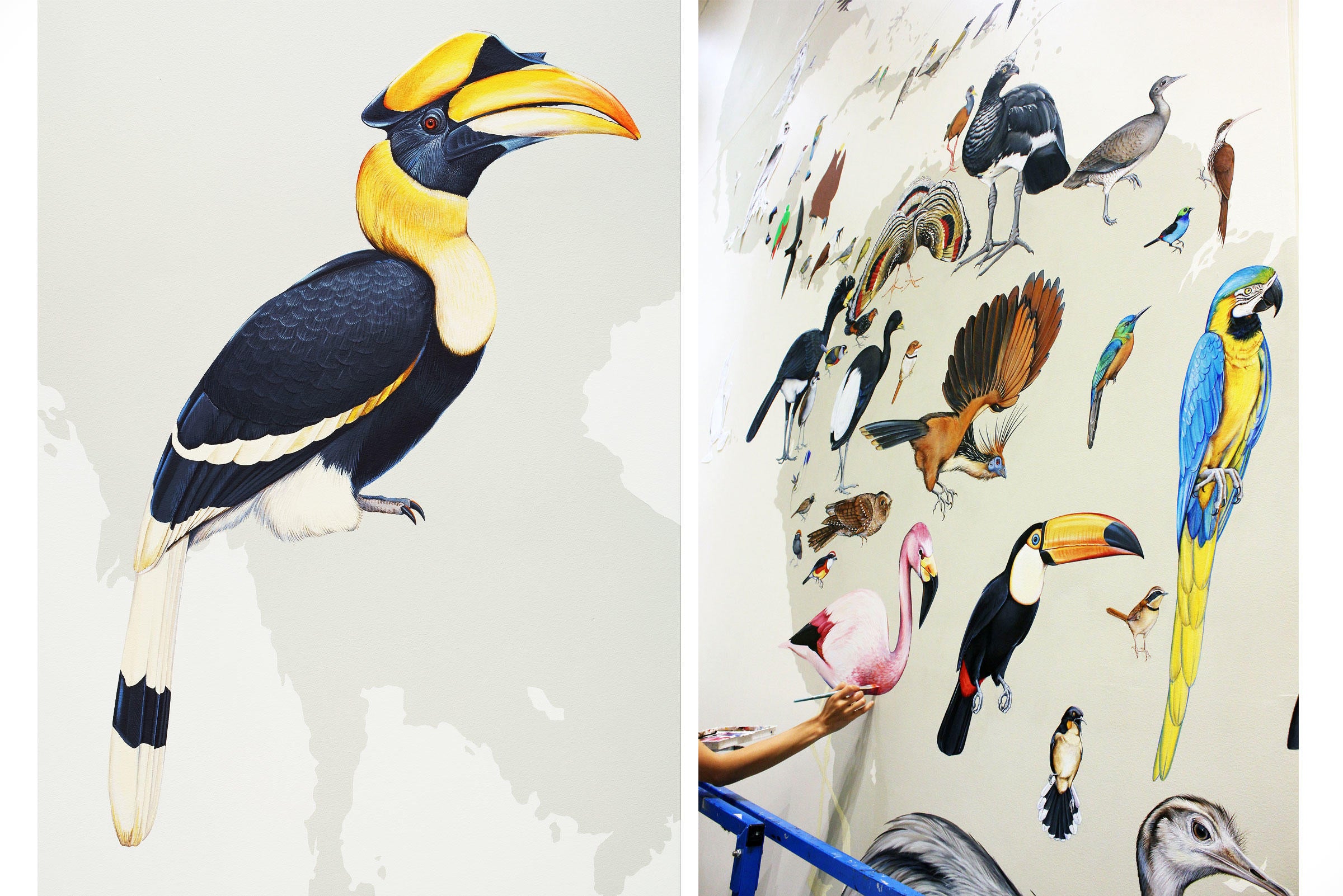 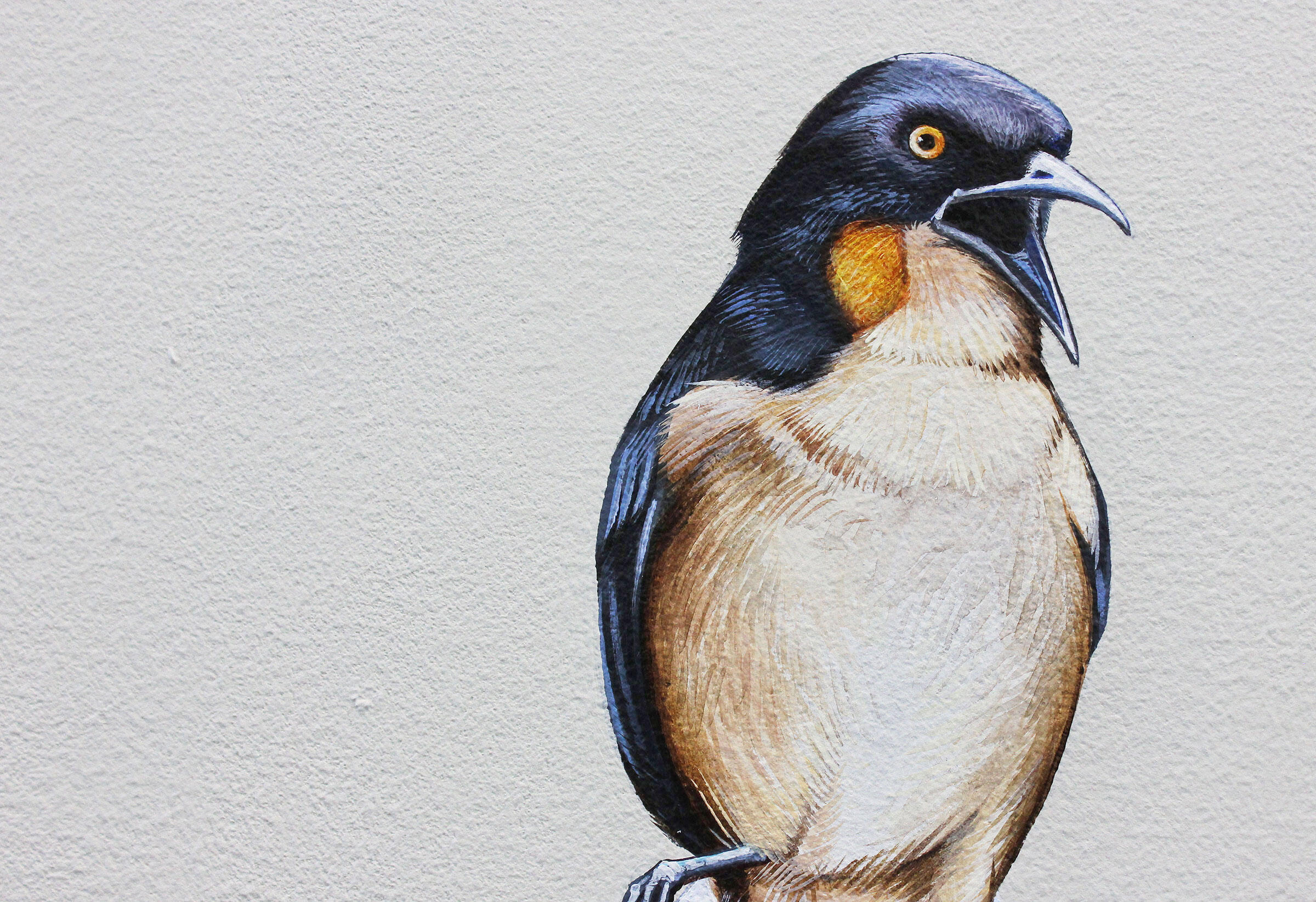 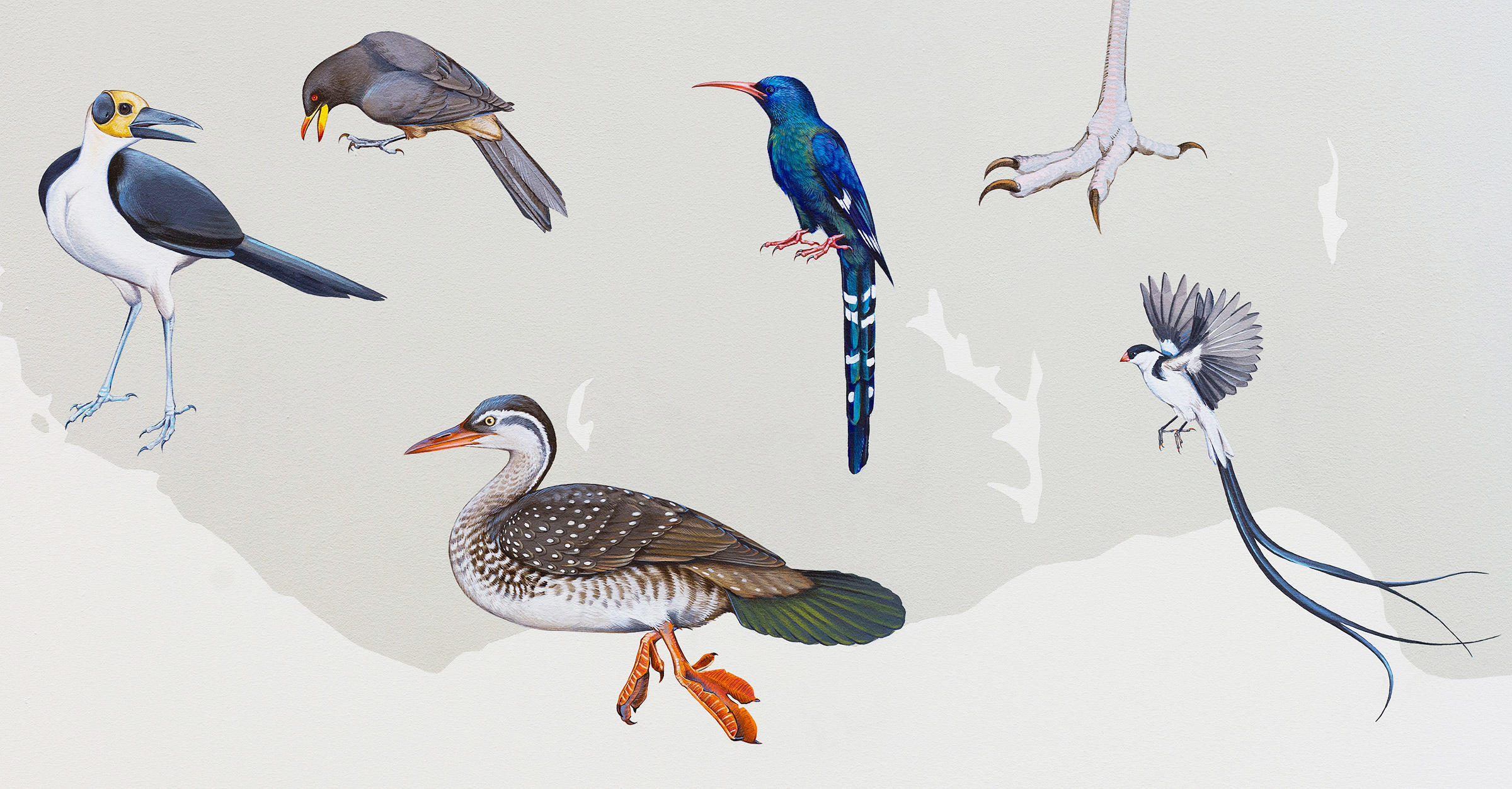 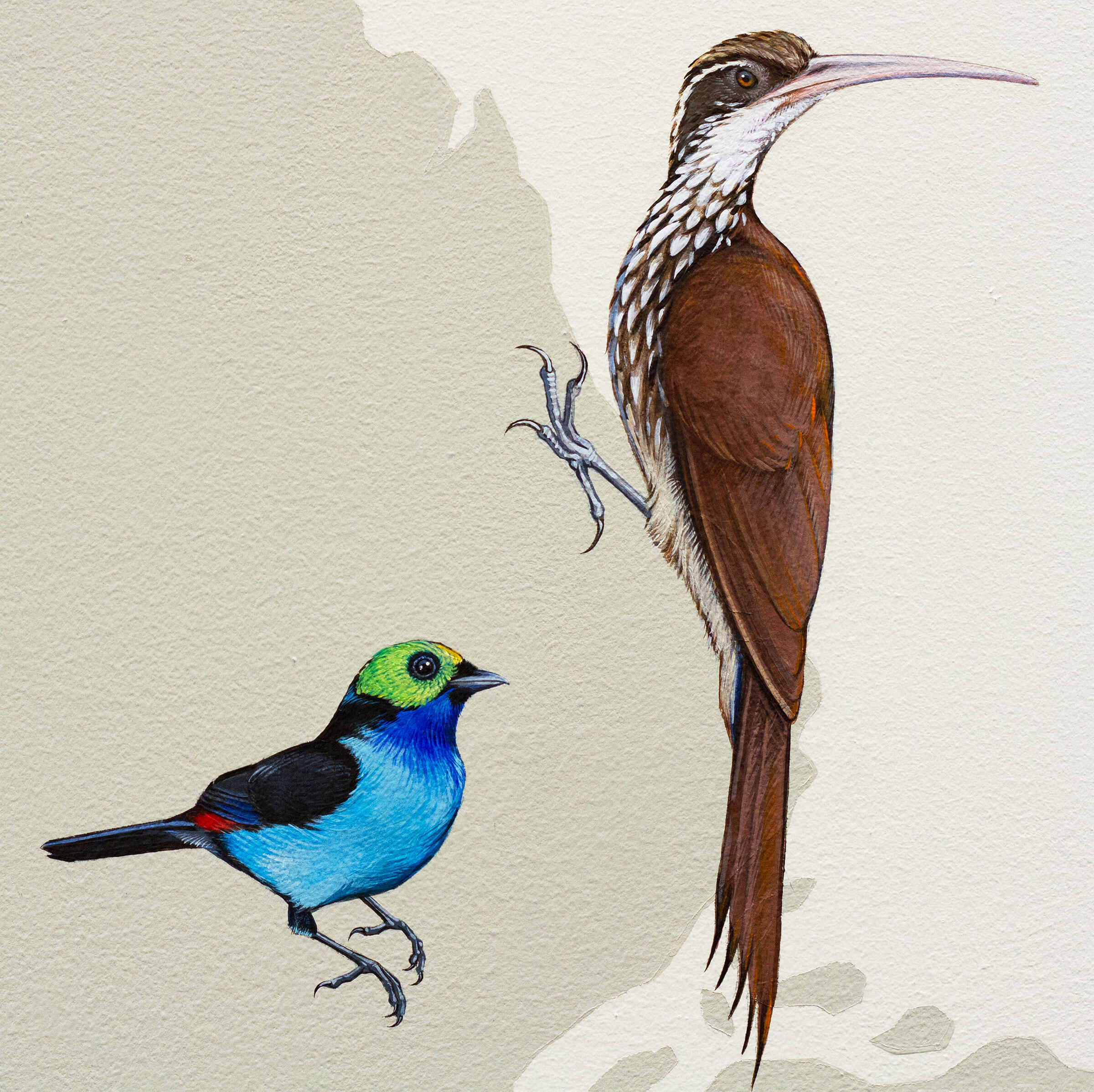 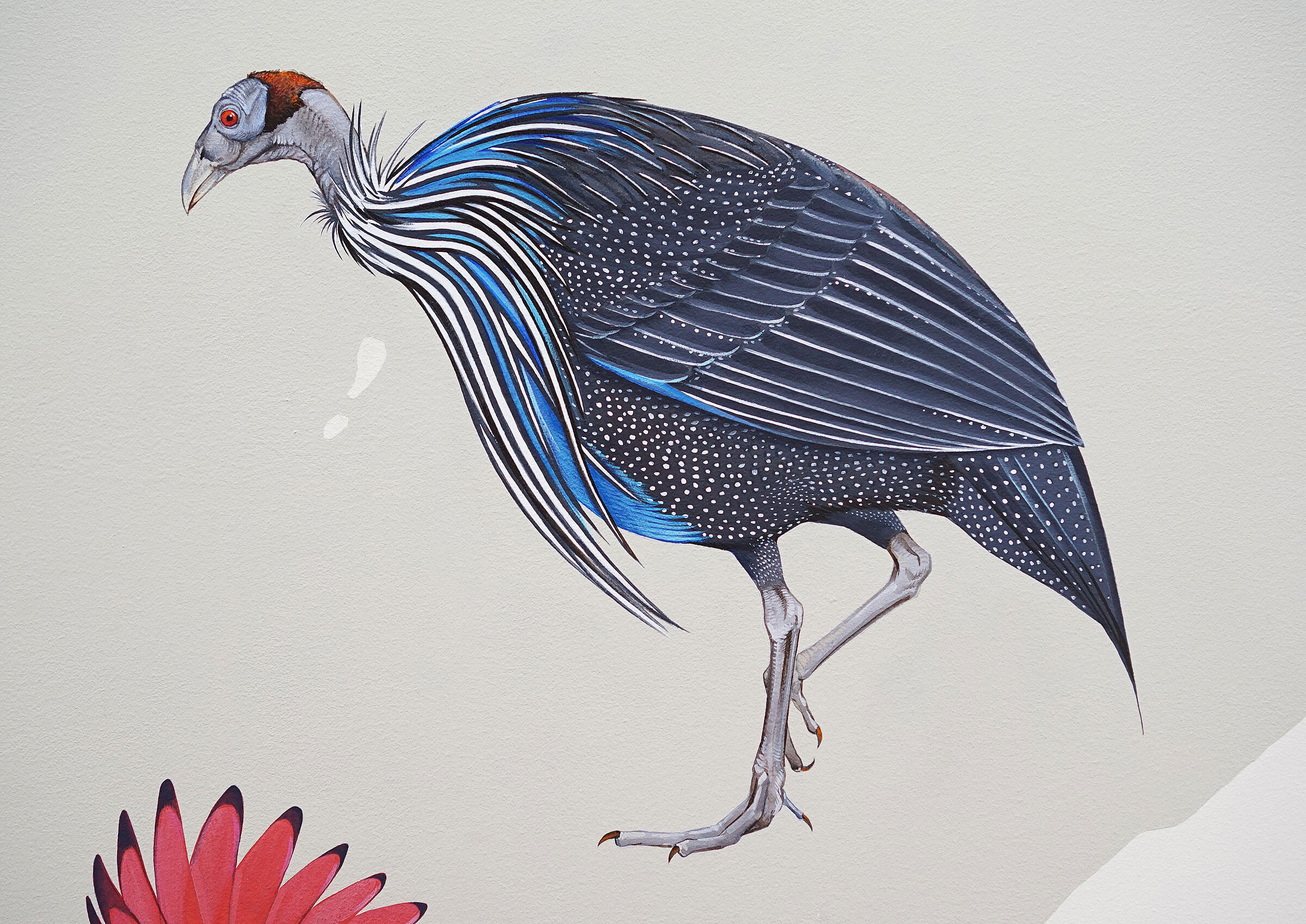 Correction: The birds in the mural are life sized, not larger than life.