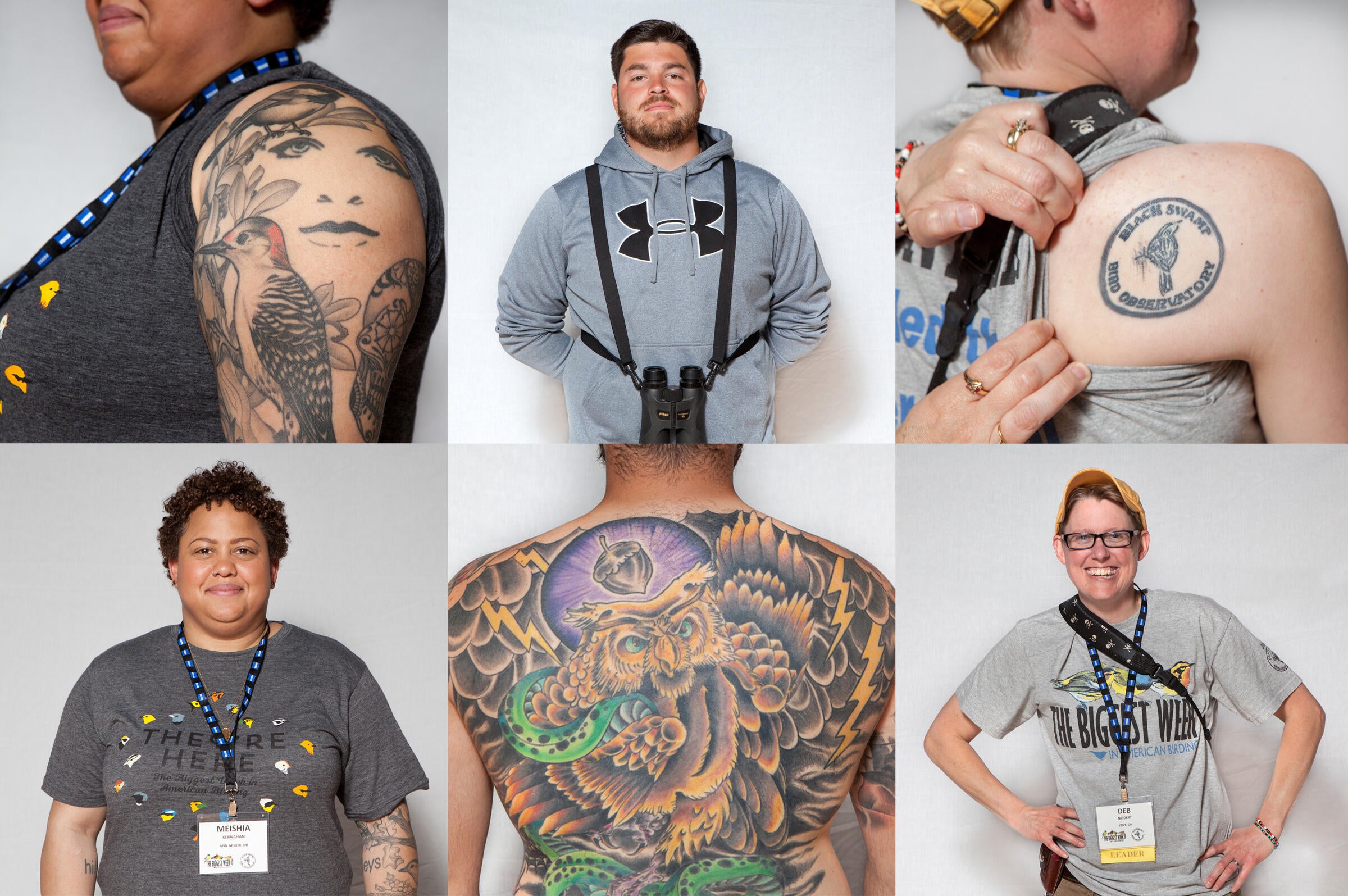 Triumph, grief, recklessness, nostalgia: People have all kinds of reasons for getting inked. Sometimes the muse is flesh and blood; other times it's feathers and wings. For those who find inspiration in the latter, the ultimate chance to show off comes during the Biggest Week in American Birding’s annual tattoo contest.

The Biggest Week is a 10-day festival that takes place in Oak Harbor, Ohio, pegged around the 37 warbler species that visit the region during mid-May. Among the 2,000 birders attending, you’ll find several with tributes to passerines, owls, hummingbirds, and even vultures, bursting across their skin. The contest first kicked off three years ago when the festival’s organizers felt like they had to spice things up and make birding more relatable. Bird tattoos were the perfect device. “This ain’t your grandma’s birding festival,” says Kenn Kaufman, whose wife Kimberly runs the Biggest Week (like a boss, by the way). As the sun dips down into Lake Erie, contestants of all ages take a break from workshops and hikes to peel back their sweat-soaked shirts, roll up their mud-streaked pants, and share their stories of how they chose their ink as a hundred or so bystanders watch.

The panel of judges is always a mixed bag: The most recent contest included comedian R. Bruce Richardson, actress Lili Taylor, Kelly McKinne, a volunteer from the local Black Swamp Bird Observatory, and last year’s champion Meishia Kernahan. They determined the first-place champ, who got to go home with a pair of Eagle Optics binoculars.

Here are the tales behind the tats of this year's contestants and winners. Maybe you’ll feel compelled to share your own. Or maybe you’ll realize it’s time to jump the gun and put a bird on it—permanently.

I've been a volunteer at the Black Swamp Bird Observatory for seven years. I just got married there! I went out and got my BSBO tattoo right before the festival. My wife has a bird tattoo, too: a Great Blue Heron.

The people at the observatory are really tight. That’s what happens when you all have one mission—fighting for birds and all. A lot of them came out to the wedding, and it really meant a lot. There’s no place like BSBO.

I decided to go big with this tattoo. I’d love to get another bird one, but I don’t really have room. When it comes to birding, I’m maxing out, too. My “Big Ohio” is going strong this year. I’m trying to see the most species in this state alone—so far my list includes 267 (the record to beat is 320). The wood warblers at this festival are really helping me out.

After I came to the contest last year I went home and told my husband that I wanted to get a tattoo. He said, “Over my dead body.” So I got one.

I’ve been coming to Magee Marsh for more than 30 years, and I’ve been birding for 52. I love the oriole; I see it every spring and it’s a reminder that things are changing. Eventually, my husband changed his mind, too. After I went out and got the tattoo, I told him that it might win me a pair of binoculars, and he was okay with it.

My brother and I would go birding on the Magee Marsh boardwalk back when we were still in highschool. He died a few years ago. This tattoo is in memory of him because he always used to tell me that he would come back after death as a Turkey Vulture. After he left I put my binoculars down for a while, but now I'm going at it again. I feel like he’s always birding with me.

Barn Owl on her, Great Horned Owl on him

We're pretty new at birding. It's only been two years since we picked up the hobby. But we got these tattoos soon after we got married.

Mine has a lock and his has the key. It worked! We've been together for 17 years now.

It was about 15 years ago when my grandmother got my mother and me into birds. We would go together—all three generations—to watch them in our favorite local spots. After she died I got these hummingbirds in her honor. The Ovenbird I chose simply because it's the greatest punk-rock bird. I think eventually I’ll turn my arm into an entire sleeve of birds.

Three years ago I decided to get a birdfeeder for my apartment. It was winter, so all it attracted were the few species that are on my arm (put there by artist Zera Anderson of Brite Idea in Ypsilanti, Michigan). They were the first birds I really saw, and they helped me get through the roughest months of the year. Come spring, I was super stoked to go birding.

This is my second year at the Biggest Week. Even though it’s been so long since I’ve seen everyone here, they all treat me like I’m their best friend. It’s also crazy how much better I’ve gotten at birding thanks to this festival. I went out today and identified almost 70 species, including warblers and vireos. Being here really makes you question your life. I keep asking myself, “why would I ever leave this place?”

I’ve been volunteering with my daughter Delaney at the Black Swamp Bird Observatory for a long time. So in honor of the incredible work that’s being done here, I decided to get a tattoo two weeks before the festival. BSBO has banded over 500,000 birds. The other crazy thing is that in 2011, they caught a Blackpoll Warbler that was already tagged . . . by them, in 2006! They found the same bird five years to the day from when they first banded it. It’s a wonderful story and an amazing species—proof that big things do come in little packages.

I really didn’t like birds when I was little. An owl trainer visited my school once and I watched the bird poop—it almost made me throw up. Growing up, I wanted to be a marine biologist. But then I read Guardians of Ga’Hoole, a fantasy series, and everything changed. The main character is a Barn Owl . . . it saved me in a lot of ways. Now I volunteer at a raptor rehabilitation center and am down to travel 1,500 miles to hit up a birding festival.

Ever since I was a kid I remember flipping through old nature books and coming across the imposing quebrantahuesos, better known as the Bearded Vulture or Lammergeier. It's one of the rarest and most specialized raptors in the world (only found in southern Europe and the Alps): It eats the bone marrow of wild ungulates in high alpine regions by dropping their large bones against rocks. It acquires its orange plumage by wallowing in sulfur springs, and has a wild red eye ring and a long beard. I always wanted to see this bird, but my family came to the United States undocumented from Spain. As I got older I watched all my friends travel. I needed to reconnect to my roots: The Lammergeier seemed to hold a key to the Old World for me.

The moment I was allowed to travel I set out for western Europe. But it was not until I reached the Republic of Georgia that I found what I was searching for. The vulture expert Lexo Gavashelishvili took me out to a mountain cliff to a Lammergeier nest. I was so compelled. Right then I vowed to dedicate myself to raptor conservation. I had many more chances to study these beautiful giants in the field, eventually sketching the image that wound up on my chest.

The inspiration struck as I was sitting in my dorm room, feeling pretty down about pharmacy school. Being a student was tough. I would study, watch TV, and sleep: That was my depressing life. But on this one day I was looking out the window, and all of a sudden, I saw a Cedar Waxwing. That’s when I knew that I should be anywhere but in pharmacy school. So I left and started studying biology instead. This tattoo (from Drew Foster at Infinite Art Tattoo in Toledo, Ohio) is a reminder of that moment. The reason it’s on my ankle is because it symbolizes the first step I took to being happier.