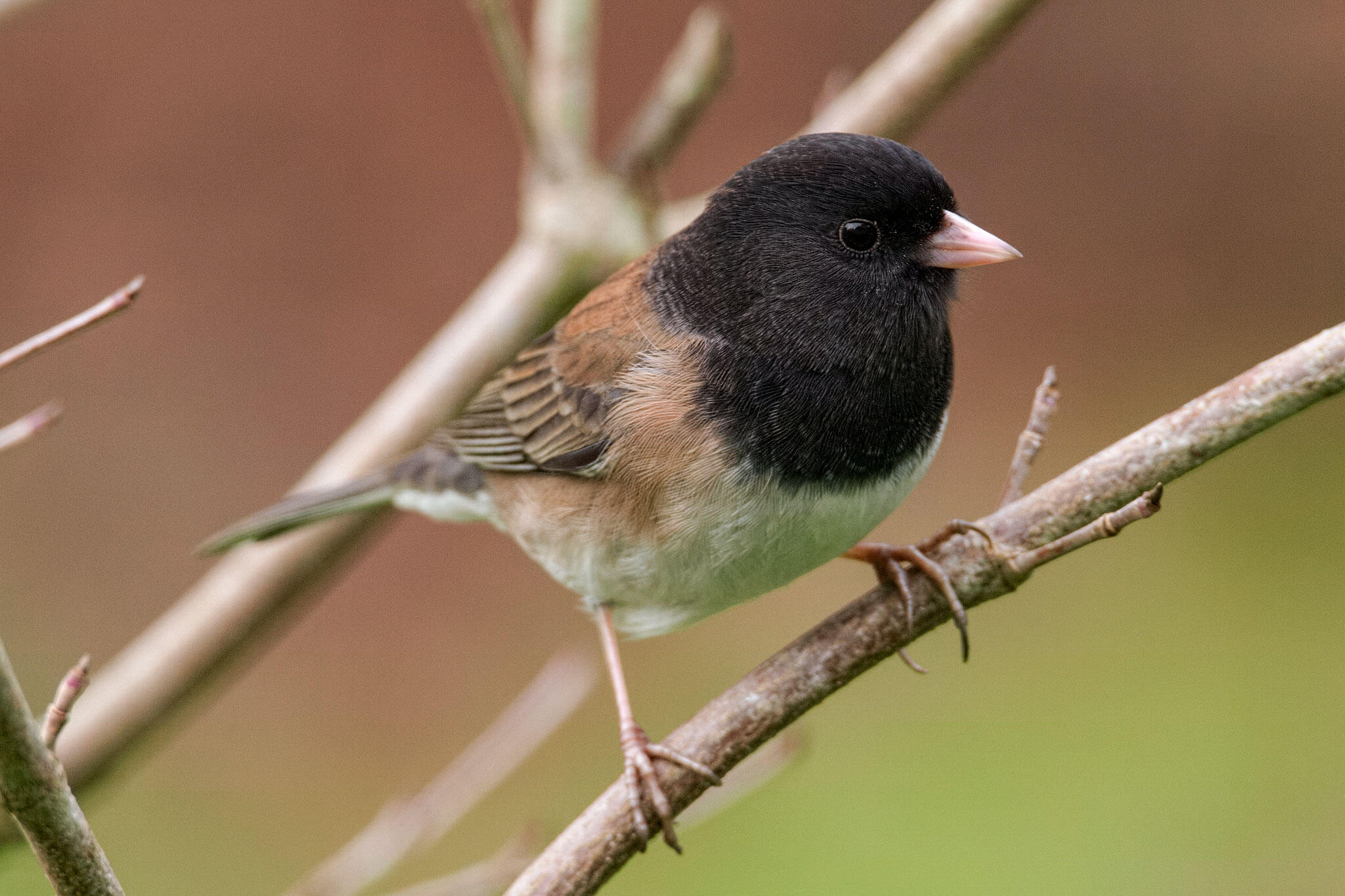 The Oregon Dark-eyed Junco, which breeds in the west, couldn't be confused with the Slate-colored Dark-eyed Junco of the east (see below). But they are in fact the same species. Photo: Rick Cameron/Flickr (CC BY-NC-ND 2.0)

The six flavors of junco were long considered separate species. Recent science shows that they instead boldly exhibit evolution in real time.

Forget the solstice; the first day of winter for me, growing up in New Jersey, came with the arrival of Dark-eyed Juncos to the yard. The small, round songbirds are easily recognized by their characteristic hops—forward and sideways on the ground, perhaps beneath a feeder—and flash of white tail feathers when they flutter to a nearby branch. And without fail, the juncos always seemed to materialize with the year’s first snowfall. Indeed, John James Audubon himself called the species Snow Bird.

In New Jersey, and anywhere in the country east of the Great Plains, snowbirds are a handsome slate color, with a bright white belly in addition to its white outer tail feathers, and an adorable pink beak. Little did I know, though, that if I ventured west, I’d discover a whole new world of multicolored Dark-eyed Juncos that have no particular association with snow. These five western varieties, which each breed in a different region, look so distinct from one another that, until the 1970s, they were considered separate species.

But they aren’t separate species—at least, not yet. The regional varieties of junco will still mate and interbreed randomly wherever their ranges meet, which means they are all the same species. “It’s probably speciation in action,” says Ellen Ketterson, an Indiana University biologist who has studied Dark-eyed Juncos for 45 years. “We think we have to go to the Galapagos or Hawaii to see that. But this is a backyard bird that offers that kind of challenge to our understanding.”

The birds' evolutionary story goes back some 10,000 to 13,000 years, to the retreat of North America’s glaciers, according to recent DNA evidence. Before then, the northern half of what is now the United States was smothered in ice. Then, the climate warmed and those glaciers receded, exposing largely unpopulated terrain ripe for colonization. Ancestral juncos (likely Yellow-eyed Juncos or relatives) migrated north and spread across the continent. Since then, some groups became isolated enough to evolve new color variations in what scientists now believe is “one of the fastest cases of speciation known in vertebrates.”

The different regional junco groups don’t really behave differently (though their songs differ some). They all nest on the ground, eat seeds and bugs, and hop to and fro. “Juncos seem to be acting like juncos pretty much wherever I go,” Ketterson says. “That’s in keeping with this notion that to whatever degree they are different, it’s recent.” In other words, their feather colors have changed—but that’s about it. And feather color is a more flexible trait than you might think.

“All you really need is changes in a gene, or even in regulation of a gene in a known pathway, to turn a feather from white to black, or black to red,” she says. “It’s pretty superficial, literally, and it could happen pretty fast.” The future of these varieties is also uncertain. Modern climate change could further isolate the groups and potentially lead to more varieties—or it could remove the current barriers, allowing them to reproduce with each other in which case they'd lose their differences.

There are about 15 different Dark-eyed Junco subspecies in North America, which can be lumped into the six groups described below. Most of these, aside from the red-backed form, are somewhat migratory—so even though they separate out in summer to breed, in winter they commingle. Out west in winter, you can even spot multiple junco flavors in the same flock.

This is your classic snowbird, which breeds in forests from Alaska to Newfoundland, north through the boreal forest and south through the Appalachian Mountains to Georgia. A male has a gray head (sometimes closer to black, sometimes tinged brown), chest, back, and wings, and a bright white belly; a female is similar with a paler brown wash.

This is the most widespread and variable subspecies group in western North America. The Oregon junco breeds in forest habitats from southern Alaska down to Baja California and east to Nevada. The head of the adult male can vary (by region) from black to medium gray, the wings are gray or brownish gray, and the back and sides vary (again, by region) from dark brown to reddish brown to pinkish. The lower belly is white. A female looks similar, with a paler wash.

Pink-sided juncos breed in the high-elevation forests of the northern Rocky Mountains, from southern Alberta to eastern Idaho and western Wyoming, including Yellowstone National Park. Males have a medium-gray head and breast, a dark smudge around their eyes, pinkish sides, brown back and wings, and a white belly. Like other Dark-eyed Juncos, the females are browner than the males.

Males of this group don't only have a medium-gray head, but also gray sides, chest, and belly, with some white on the lower belly. They have a rusty back and, like the pink-sided junco, gray-headed males have a black smudge around their eyes. They breed in the southern Rocky Mountains from Colorado to central Arizona and New Mexico.

White-winged males look similar to the slate-colored juncos, but they're larger, with a relatively longer bill and tail, have white wingbars (these are most prominent in fall and winter, after molting, and sometimes wear off, so they can't be relied upon for ID), and significantly more white in the tail. They breed in a small geographical area: the Black Hills of South Dakota, a rugged landscape dotted by ponderosa pines.

These rare juncos live in the southern mountains of Arizona and New Mexico, not far from where Yellow-eyed Juncos range—and they look quite similar to Yellow-eyed Juncos, except for eye color. They sport a bi-colored bill—dark gray on top, silvery on the bottom—a gray head, lighter gray throat and breast, gray and rust wings, a red back, and dark eyes, with a dark eye smudge. They are mostly non-migratory, with some altitudinal migration.

Can't get enough junco? Check out the documentary The Extraordinary Ordinary Junco, a project led by Ellen Ketterson.

Juncos Are the Original Snowbirds

As winter arrives, flocks of these lively little birds suddenly appear across much of the U.S.

Birds Can Smell, and One Scientist is Leading the Charge to Prove It

For more than a century nearly everyone believed birds sense of smell was poorly developed or nonexistent. They were wrong.

Get to Know the Yellow-eyed Junco

Or, as locals in the Southwest once called it, the "lightning bird."