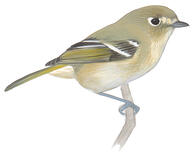 April 28, 2015, near Quetzaltenango, Guatemala — John Cahill and I were up a trail in Guatemala’s western highlands this morning, looking out at the perfectly cone-shaped Santa Maria volcano (and looking unsuccessfully for Horned Guans), when a mushroom cloud of steam and ash rose up behind it. “That’s from the Santiaguito volcano,” John said, which was out of sight behind Santa Maria. “It lets off an eruption every couple of hours or so.” We watched the plume dissipate, and later found a dusting of ash on our car. Guatemala is the land of fire: There are thirty-something volcanoes in this country, and several are quite active.

The pine-oak forest where we spent the morning felt remarkably similar to forests in parts of the western U.S., all needly and temperate. The birds were similar, too. In the past two days I’ve picked up my first Mourning Dove, Steller’s Jay, Hutton’s Vireo, Bushtit, Townsend’s Warbler, Northern Flicker, Western Tanager, MacGillivray’s Warbler, and Pine Siskin of the year (all of which are common in my backyard in Oregon). At least, it feels familiar until a Pink-headed Warbler or Mountain Trogon pops into view!

I’m enjoying birding here with John, who is great company (and tall-he says he doesn’t know his height, but I’d guess 6’4”). His family moved to Guatemala when John was five years old and they have stayed 14 years so far. John went through the regular Guatemalan school system until 2012, when he stopped high school to do a big year of birding around the country (only later did he read Kingbird Highway and realize he wasn’t the first to follow this path!). He went back to school in 2013, then paused again to do a second, even bigger year in 2014, when he spent all but 20 days of the year birding every corner of Guatemala and saw 651 species of birds. Now, at 19, John has perhaps seen more birds within Guatemala’s borders than anyone else. He’s an expert on recording bird sounds, started a popular Facebook group to get local Guatemalans interested in birds, and is working on various research projects (last week he helped conduct a workshop to train Guatemalans to be bird guides). A cool dude, who I have a lot in common with—and we’ve got three more days here to see as much as we can.