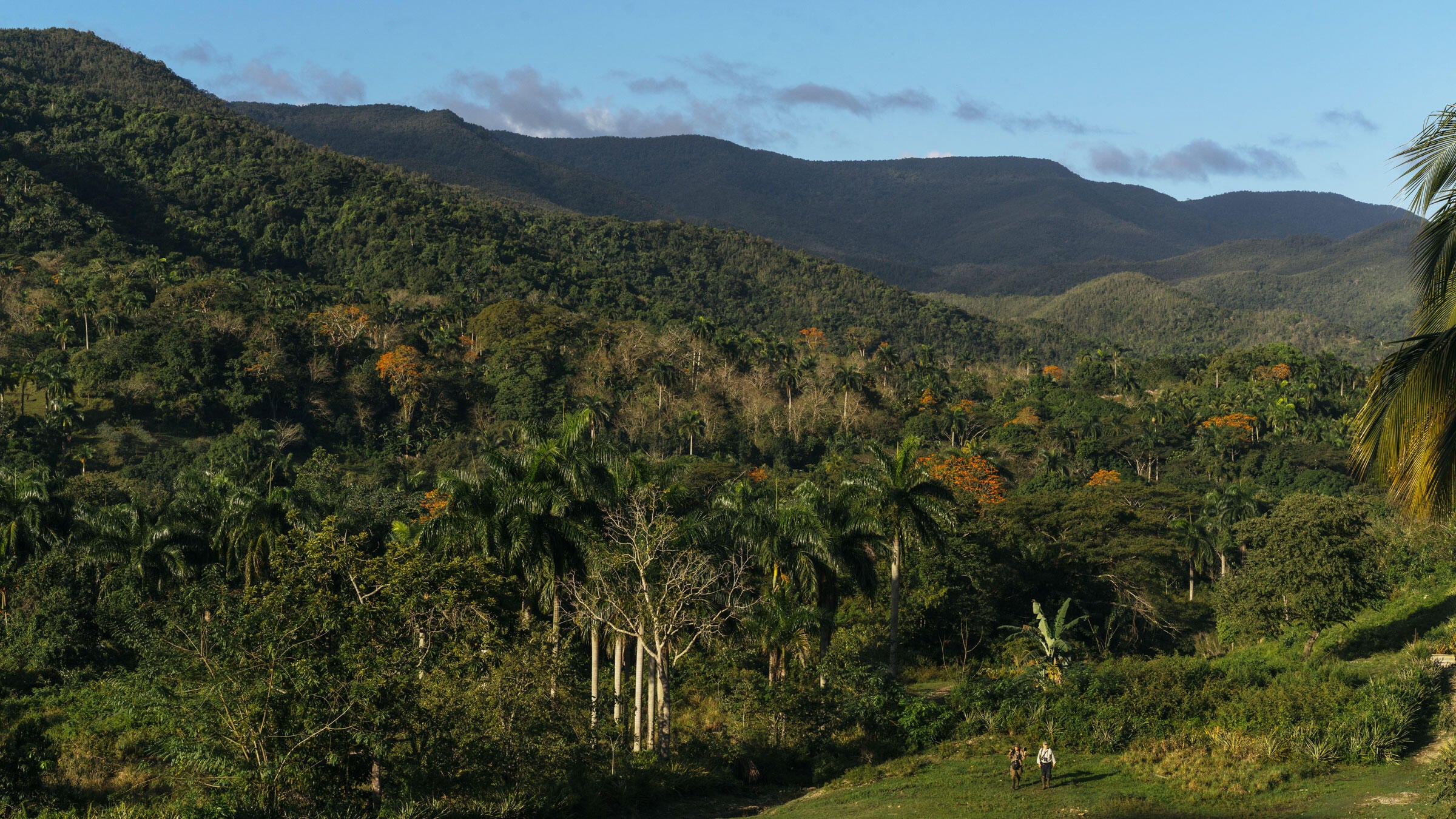 As the trip draws to a close, Gallagher focuses his hopes on new territory.

February 5, 2016; Farallones de Moa, Cuba — This would be the final day of our journey. Yuri had rejoined us with his old Willys wagon, and we planned to drive back to Holguin with him late in the day. Our plane to Toronto departs from there tomorrow night. But we still had one more mission to undertake. We needed to interview the man who had two Ivory-billed Woodpecker encounters in the 21st century. As we hiked together at the edge of Farallones shortly after dawn, doing some last-minute birding, Martjan and I talked about the thought looming large in both of our minds: What happens if his sightings are credible? Would we still just drive out of here today like nothing happened?

The answer for both of us: “No!” At that instant, we could imagine it all. If we believe his sightings, we’d grab our tents and sleeping bags, borrow a couple of mules, and ride to the place where he saw the bird. We could do a double-knock session at dusk this evening, spend the night there, and do another one at dawn. After all, our plane isn’t leaving for Toronto until 10 tomorrow night, and it’s only a five-hour drive to the airport. We could make one more great push for the birds, even if it meant arriving at the airport filthy and sweaty with our gear in disarray. (I could just imagine kneeling in the back of the Willys, stuffing things frantically into my luggage as we raced down the dusty dirt road, occasionally becoming airborne when we hit a bump.) We might even miss the plane. No matter, we were both completely on board.

We climbed into the Willys with Yuri, Jabao, and Manyi and began our trek to Calentura—making one more horrendous uphill climb, going higher and higher until the gears in the old car screamed and the tires spun. We finally got out to hike the rest of the way to the man’s farm. En route we passed an elderly man named Eduardo sitting on a stool in front of his simple one-room shack, a cigar clenched in his teeth. He told us the huge woodpeckers were common here when he was young, and were always unsuspicious and approachable. Although he never saw anyone harm a Carpentero Real, he says people probably did kill off the birds. He hasn’t seen any in decades.

We continued up the hill until we saw a thin, dark-haired man wearing an old tan shirt and a red cap walking toward us, with a cloth bag and a machete slung from his belt. His name was Rubiel, and he was the very person we were seeking. The elation we felt was indescribable. As we talked with him, everything seemed great: He’s 70 years old; he’s lived here all his life; his Ivory-bill descriptions were perfect; he seemed honest and believable. But then we asked him when he last saw a Carpentero Real, and he said it was in the 1970s.

So the whole thing was a mistake. Rubiel did not see or hear any Ivory-bills in this century. Even the 1986 sightings are far more recent than his. Perhaps news of his sightings somehow became garbled, like in a game of telephone, the details changing completely as the story passed from person to person over the years.

This was absolutely devastating to me, though I’m not sure why. I always knew the odds were stacked greatly against us finding any Ivory-bills here. I guess before we came to Cuba I had thought that the worst-case scenario would be that I might to go home without a sighting but still feel that the birds are here, waiting for me or someone else to find at a future time. I realized listening to Rubiel’s story that I no longer felt hopeful that any Ivory-bills still exist in Cuba. We had spent many days trekking back and forth across the best Ivory-billed Woodpecker habitat in the entire country, and we could not find any evidence of their presence—no responses to the double-knock drumming and recorded calls we broadcast everywhere we traveled; no dead pines stripped of their bark in the characteristic style; and no recent sightings by people who have spent their entire lives in this area.

It is so incredibly hard for me to give up. I’m one of the most optimistic Ivory-bill searchers you could ever meet, but I am filled with despair. If others want to take up the mantle and continue looking for the bird here, I wish them well. I truly hope they prove me wrong. But for me, the search for the Ivory-billed Woodpecker in Cuba is over.

I will continue to scour the southern United States in search of this bird. The amount of suitable Ivory-bill habitat is astronomically larger here than in Cuba, and I intend to explore much more of it in the years ahead. I’m particularly interested in Florida, which still has vast areas of pristine mangrove forest that should be searched. Most people don’t associate mangrove swamps with these birds, but actually Ivory-bills were seen and some were collected in these areas in the 19th century, so they definitely should not be ignored. I also plan to keep searching swamp forests in Arkansas, Louisiana, South Carolina, and other places across the South. With luck, someone should be able to solve the mystery of the Ivory-bill and determine once and for all whether this elusive grail bird yet exists.

And that's a wrap! Thanks for following our quest. If you want to read another take on this adventure, see Mac McClelland's Ivory-billed story in the May/June issue of Audubon magazine.