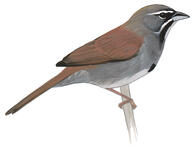 May 24, 2015, Los Angeles, California — California Gulch, in the rugged Pajarito Mountains in southeast Arizona, might look like just another twisting, sun-baked desert canyon—it’s got a dusty road, some cacti, a few bits of rusted metal, and the occasional animal track. The gulch runs straight into Mexico; when you arrive, a metal sign proclaims “Warning: Smuggling and illegal immigration may be encountered in this area.” It doesn’t get many visitors besides coyotes, snakes, and the border patrol. The nearest settlement, Ruby, is a ghost mining town with fewer than five residents.

But California Gulch has one special claim to fame: It is the only reliable and accessible place in the U.S. to find a bird called the Five-striped Sparrow, which likes remote brushy hillsides near desert springs. I missed this particular sparrow in Mexico, so John, Jake, another friend and Tucson-based birder named Jennie Duberstein, and I went looking for Five-stripes in California Gulch this morning—my last in Arizona.

As it happened, the Five-stripes were easy: We had two of them within a couple minutes of arriving. The sparrows looked nonplussed with their borderline existence, more concerned with scratching around in the dirt than posing for portraits. Each one had a crisp white line over each eye, another white line below each eye, and a line straight down the throat. Ten stripes total!

In the afternoon, after a quick round of farewells, I hopped a short flight west to Los Angeles to begin a three-day blitz of southern California. After touching down in the City of Angels, I grabbed a taxi across town - and, in the slanted late-afternoon sunshine, I passed through Beverly Hills and Hollywood, crossing some of the world’s most famous streets: Mulholland Drive, Santa Monica Boulevard, Sunset Boulevard… When I passed the famous Hollywood sign, a lime-green Lamborghini flashed past, and I thought, “This sure ain’t Latin America any more!”

I connected with Dave Bell, an entrepreneurial nonprofit leader, and Lance Benner, an asteroid physicist who works for NASA’s Jet Propulsion Lab, and the three of us headed straight into the San Gabriel Mountains above Pasadena this evening to look for owls. Lance has been studying the San Gabriels’ owls in his free time for more than 15 years, looking and listening for them several times each week(!), and knows practically every territory of every individual owl. He talks about them as if the owls were his neighbors, which, in a way, they are. As the clock ticked toward midnight, we heard Spotted, Great Horned, Western Screech, and Flammulated Owls calling spontaneously.

Then I heard a Saw-whet Owl, and got excited until Lance cocked his head and said, “No, that’s someone’s tape.” Sure enough, another car was parked a hundred yards up the road, and in its taillights we could just make out three birders playing owl calls over a guardrail. They didn’t seem to notice us, and Lance got a bit mischievous: “Let’s see if we can confuse them!” From his recording equipment, he broadcast a round of wild screeching sounds. The other birders went silent. After a lengthy pause, we snuck away, leaving the unknown owlers to wonder what could possibly have made those strange noises in the night.