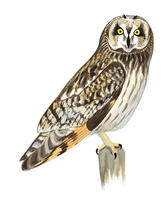 June 2, 2015, Summer Lake, Oregon — When I tell people I’m from Oregon, they usually picture a green, wet place covered by trees—which is an excellent description of western Oregon, where most people live (including me). But the eastern half of the state is completely different: It’s a wide, open desert.

Eastern Oregon is characterized by sagebrush, rimrock, pine flats, and cowboys—straight out of a Zane Grey or Louis L’Amour novel. Road signs here call it the “Oregon Outback,” and the description is appropriate; the landscape is more similar to central Australia than the drippy Pacific Northwest rainforest. I love birding in eastern Oregon—it’s a totally wild experience. As I write this, a pack of coyotes is howling outside the window.

My dad and I spent the day near Summer Lake, an alkali flat in basin-and-range territory. The highlight for me was a pair of new owls: A family of Long-eared Owls which I discovered in a remote stand of juniper trees, and a Short-eared Owl which emerged at dusk to hunt the marshes at Summer Lake. With the Great Grays yesterday and a roosting Great Horned this afternoon, it’s been a good run of owls lately!

When we checked in to our room this evening, I mentioned my adventures to the woman at the Summer Lake Inn. “You mean like that movie, 'The Big Year’?” she asked. “Well, yes,” I replied, “except worldwide.” “Wow, everybody’s seen that movie!” she said. “Nice!”

I’ve heard similar reactions many times this year, even from non-birders. I guess “The Big Year” (a recent film about birders starring Jack Black, Owen Wilson, and Steve Martin) has really affected the world’s general impression of birders—for better or worse . . .