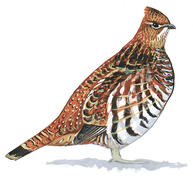 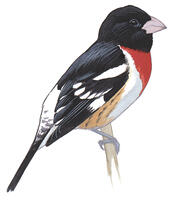 June 4, 2015, 30,000 Feet Over the Midwest — I awoke this morning ready to start the second half (well, seven months) of the year. A week at home in Oregon has been relatively relaxing, but I’ve maxed out the birds of my home state, and the clock is ticking—time to get moving again!

This morning after breakfast I psyched myself up with a run on the treadmill. Ten minutes into my run, though, a bird butted in: I glanced out the window, and a male Rose-breasted Grosbeak was on my bird feeder! Rose-breasted Grosbeaks are rare on the West Coast, so to have one show up at home was quite a surprise. I jumped off the treadmill, grabbed my camera, snapped a photo, and posted it to the local birding listserv. Four birders from Eugene (a 25-minute drive away) soon asked if they could come look for the grosbeak, and each of them—Sally, Sylvia, Barbara, and Barry—got good looks at it this afternoon as the bird made regular visits to the feeder, and as I packed to head toward the eastern hemisphere. It was a strange day to see the rarest bird I’ve ever spotted at home, but, as one person commented, “maybe it’s doing a big year of its own.”

The grosbeak was fun, but I saw hundreds of them on their wintering grounds months ago. I worried that today might break my five-month-long, bird-a-day streak: The only conceivable new species I might still pick up in western Oregon was Ruffed Grouse, which is a tough one. Nevertheless, with a free hour, my mom and I decided to try a logging road near my house where I’ve seen grouse in the past, hoping to kick one up.

Fifteen minutes into our walk, my mom said something like “This isn’t looking good, is it?” and, literally before I could answer, I nearly stepped on a Ruffed Grouse hiding in the grass. It burst from underfoot with a whirr of wings and bombed into the bushes, flaring its banded tail. We looked at each other and burst out laughing—what a ridiculous stroke of luck!

In late afternoon, my mom and dad dropped me at the Eugene Airport, and I hugged them goodbye for another seven months. As I stepped on the plane for a redeye to the east coast, I felt calm, relaxed, reflective, and excited for the rest of this stacked-up year. It was easy to slip into the sky tonight, where I’m resting at 30,000 feet. This life is simple, really: Bird, eat, bird, sleep, bird, repeat.