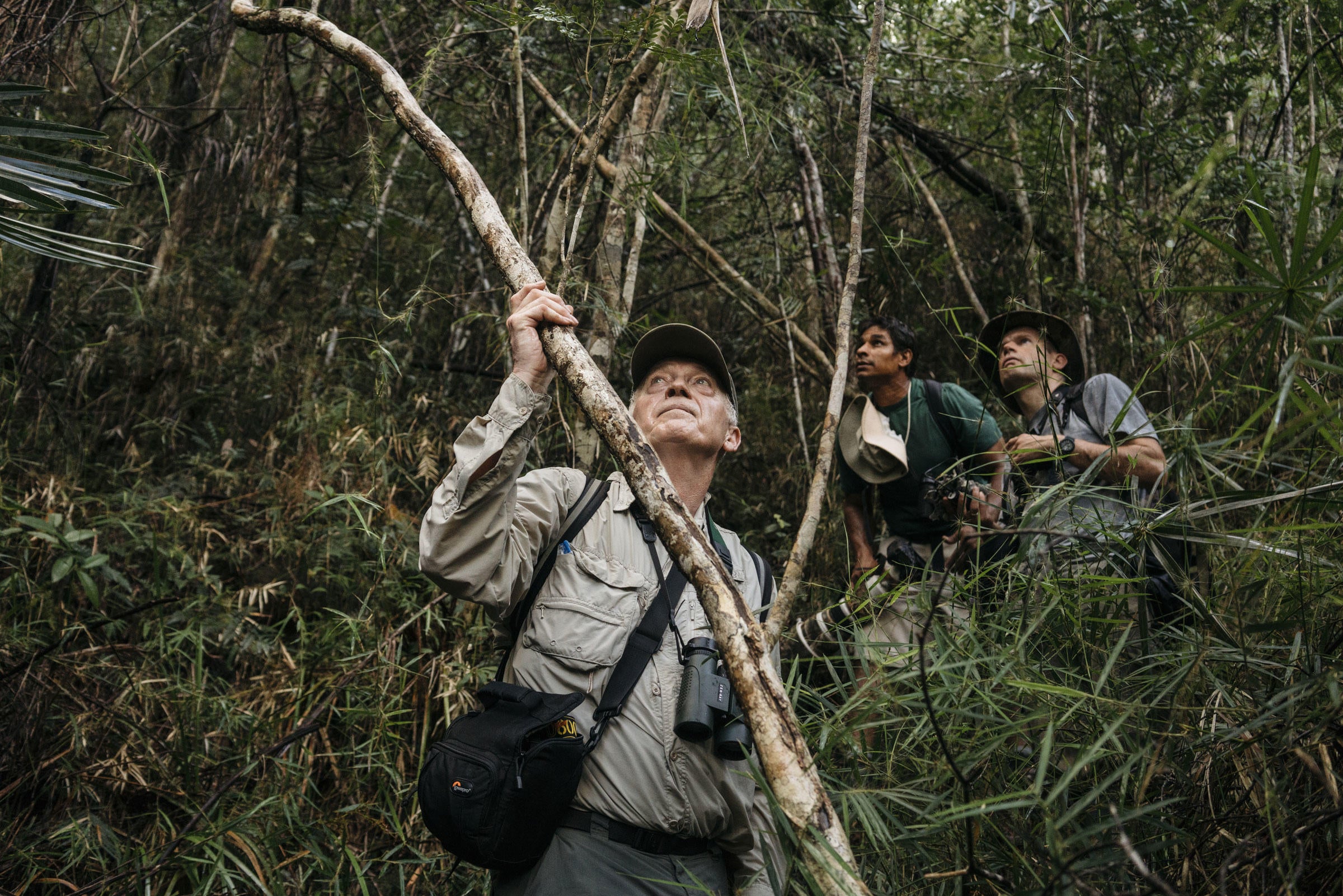 Day 5: Travels With El Indio in the Mountains Above Bahia de Taco

January 27, 2016, Bahia de Taco, Cuba — It rained hard much of the night but had eased by dawn, so we began our hike, making our way up the treacherous, rain-slick, red-clay trails, following El Indio to the pine forest above. We were rewarded by stellar views of several stunning endemics, such as the Cuban Tody (a tiny, green-backed gray bird with a crimson throat, whose distinctive call seemed to ring out wherever we went); Cuban Bullfinch (a dark, large-billed bird), Cuban Solitaire (with an ethereal song that seems to drive Martjan crazy, reminding him of the countless hours he spent in Cuba before, getting eating alive by mosquitoes as these birds sang endlessly), Cuban Green Woodpecker, and Cuban Trogon—the country’s national bird, spectacular with its green back, violet blue crown, white breast, red belly, and long tail.

Martjan began his double-knock protocol as we reached the high pine forest, strapping the resonator box to a tree and pounding the hinged dowels to create the Bam-bam sound of a drumming Campephilus woodpecker. This was the first time anyone had used a device of this kind in Cuba; the sound echoed through the forest. At the end of the drumming session, Martjan held up a small mp3 player with a speaker and broadcast the calls of an Ivory-billed Woodpecker—kent, kent-kent, kent—recorded in northern Louisiana in 1935 by a team of researchers from the Cornell Lab of Ornithology.

After each session, which lasted about half an hour, we hiked to the next spot, 500 meters away, and tried again—Bam-bam—waited about 25 seconds, then Bam-bam again. We tried this 4 times today. The last time, I stayed behind to hear what it sounds like from a distance, and I was amazed at how realistic it is—just like the double-knocks of Robust Woodpeckers (a relative of the Ivory-bill) I heard last year in the Atlantic Forest of Argentina. And the sound carries a remarkably long way. I couldn’t hear the kent calls at all—and these were previously the only acoustic lure researchers had to attract the birds. The double-knock device extends our range significantly, and we are eager to try it out in prime Ivory-billed Woodpecker areas as soon as our permits arrive.

During our dawn-to-dusk hike, we asked El Indio if he has ever seen an Ivory-billed Woodpecker, and he astounded us with a description of four birds he saw when he was seven or eight years old in the early 1980s. They were very close to here, he said, in a canyon leading up into the mountains. He was with his father when he saw the birds, he said. He described the appearance of the birds and their calls perfectly. This news is very welcome. In the distant past, Ivory-bills had lived in lowland areas in Cuba, but most of them vanished as the forests were cut in the 19th century. The only sightings since the 1940s took place in mountain pine forests. If the birds are still nesting in canyons with tropical forests, it certainly raises the chances of their survival. When we asked him whether he believes the Ivory-bill might still exist, El Indio said yes but that the only way to prove it would be to launch a major two-month-long expedition, scouring the mountains and valleys of this entire area, including all of Humboldt National Park and more.

El Indio left us with much to ponder. Later in the evening we visited his father. Our hearts sank when we realized that his descriptions of the birds and their calls were terrible. He seemed to be describing the West Indian Woodpecker, a smaller species that we had seen earlier on our hike. Is it just that these sightings took place such a long time ago that he has forgotten what the birds looked like? Or is he just not a good observer? We have no way of knowing, but it does cast a shadow on the validity of El Indio’s childhood sighting.

Follow my daily blog as the search for the Ivory-Bill unfolds.