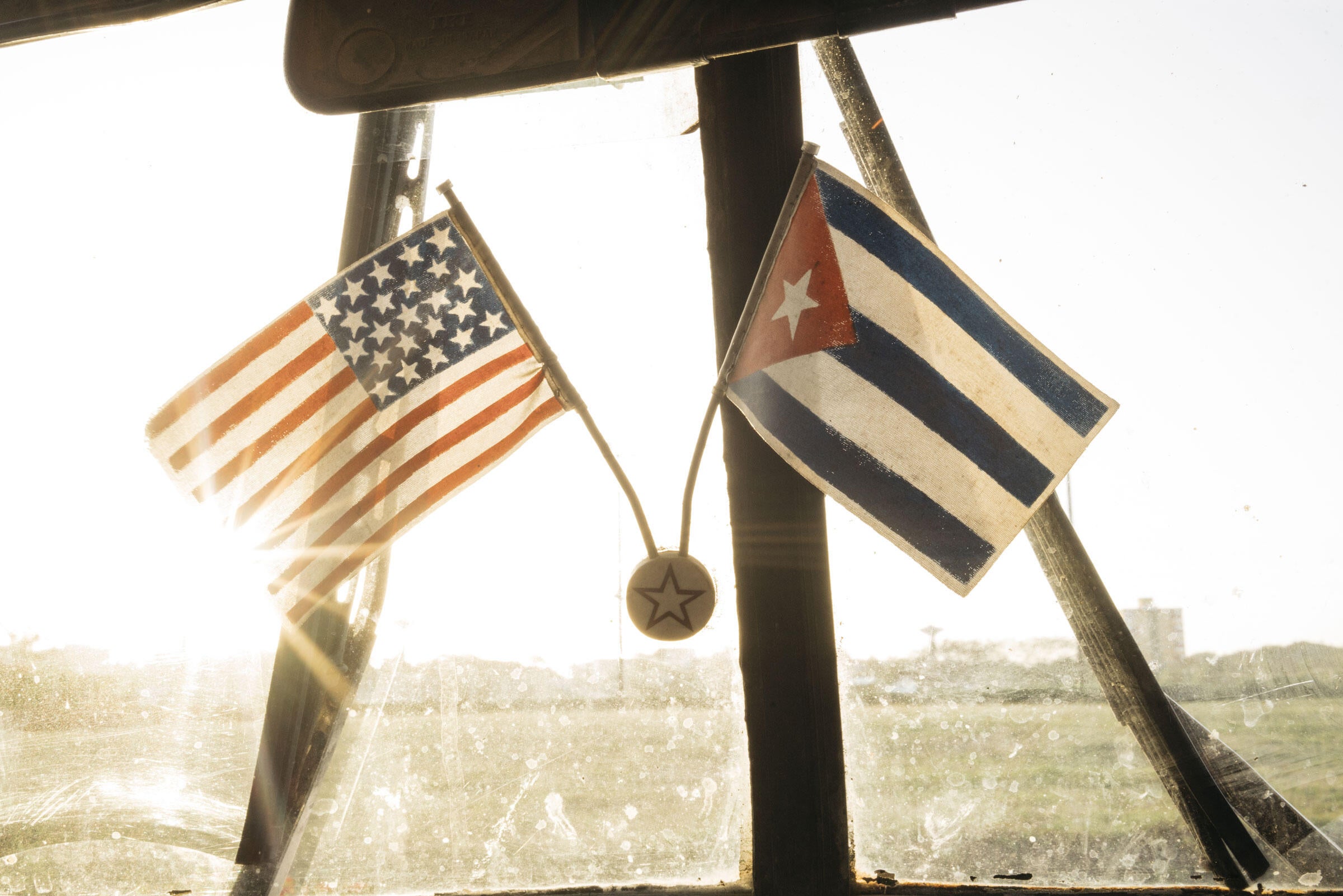 A U.S. flag paired with a Cuban flag hangs on the windshield of the car that took Tim Gallagher and Martjan Lammertink to Guantanamo. Photo: Greg Kahn

The team encounters a few ominous creatures as they wade into restricted territory.

January 28, 2016, Bahia de Taco, Cuba—Martjan and I couldn’t resist taking another hike back into the mountains with El Indio, and we left just after dawn. One of the birds we looked for was the Stygian Owl we had seen just before dark last night, perched high in a tree. The word Stygian refers to the River Styx, which, according to Greek mythology, divides the world of the living from that of the dead in Hades. So Stygian things are generally dark and sinister looking, which is an apt description of this owl, with its somewhat scary visage. But the bird was long gone by the time we passed the tree where it had been perched.

We heard high-pitched chirps coming from the leaf litter, and El Indio soon pulled out a tiny amphibian to show us. It was one of the smallest frogs in the world—an eastern Cuban endemic called Eleutherodactylus iberia. Cuban researcher Alberto R. Estrada discovered the species during Martjan’s 1993 Cuba expedition. El Indio held it up for me to take a picture. It was smaller than his thumbnail.

We bid farewell to El Indio—and also to the white bust of Alexander von Humboldt, the great late 18th and 19th-century explorer-naturalist, who gazed sternly at us from a pedestal near the park entrance at Bahia de Taco—and began our journey to Guantanamo, first on the rough dirt road to Baracoa, then on a winding, but well-paved highway. We arrived at the park office in Guantanamo just before 5 p.m. Thankfully, it was still open, and we had a long talk with a researcher and a Cuban official. This was an exciting moment: We have received official permission to enter the restricted part of Humboldt National Park, where the last sightings of Ivory-billed Woodpeckers took place. Moreover, the Cubans have fully embraced our expedition and will help us make arrangements to travel to the park. They seemed happy to have us there, using our trained eyes and ears in a concerted effort to find the birds.

Tomorrow we will be driven up a paved road from Guantanamo to Palenque and then another dozen kilometers on what is reputed to be a horrendous dirt road to the upper entrance of Humboldt National Park in a Russian 4-wheel-drive vehicle called a UAZ-469 (nicknamed a “Kozlik” or “Goat”), which was a popular military vehicle in Eastern Bloc armies for decades. And the Cuban park officials will supply a driver. We will then use pack mules to haul our gear the rest of the way to Campamento de los Rusos (“Camp of the Russians,” a cleared area beside a natural spring, so named because a team of Russian geologists camped there in the 1970s), where Lester Short’s expedition camped in 1986. We will spend a week camping in prime Ivory-billed Woodpecker country. Rain is expected tomorrow, which could make travel dicey, but as always, we’re hoping for the best.

Follow my daily blog as the search for the Ivory-Bill unfolds.