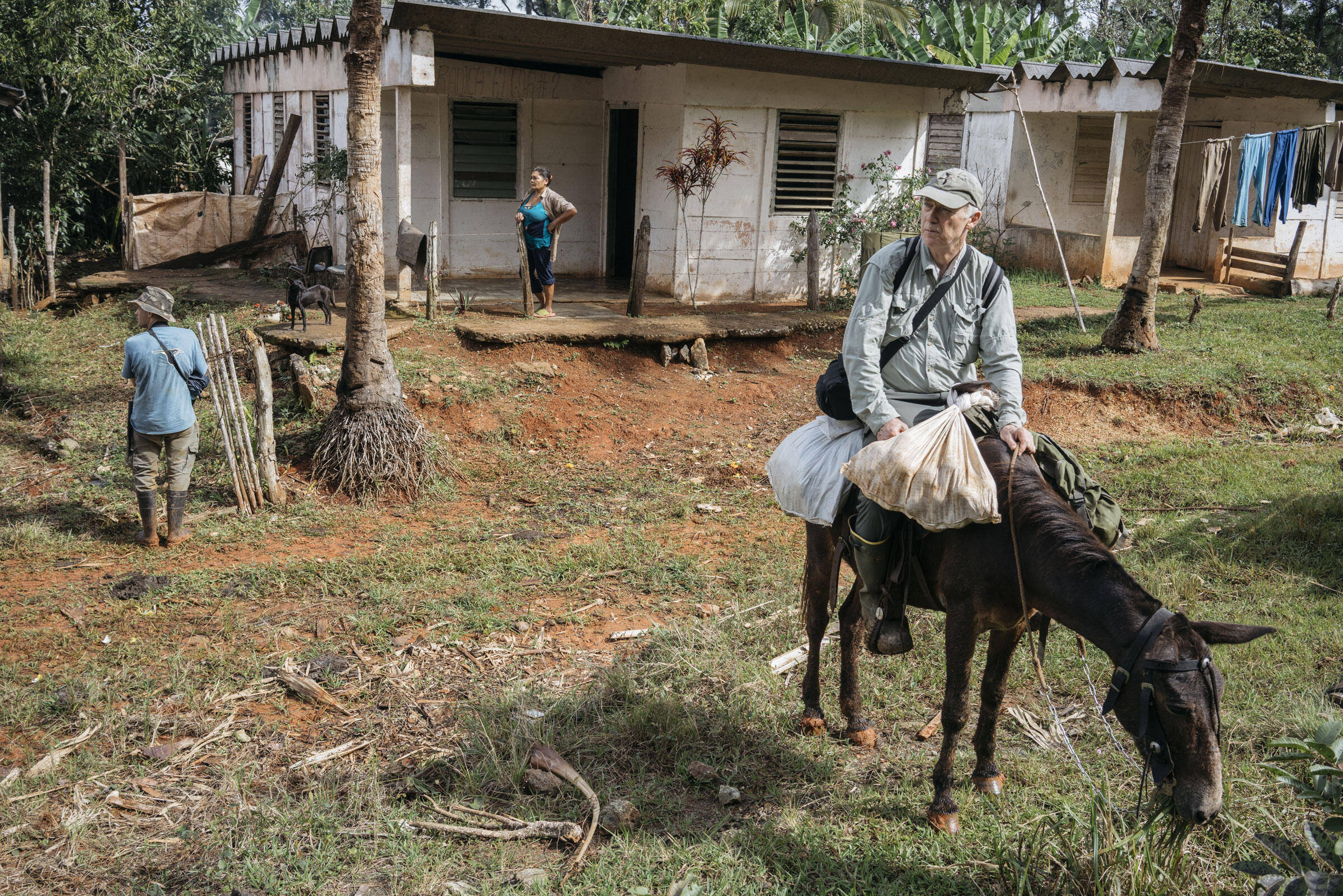 The team sets out on mule for their next destination: Ojito de Agua, a former Russian mining prospect camp in eastern Cuba. Photo: Greg Kahn

After a series of unfortunate events, Gallagher and the team finally reach their camp in Humbolt National Park.

January 30, 2016, Guantanamo Province, Cuba — We woke up stiff and achy as the first rays of morning sunlight brightened the horizon. The place we stayed—a small, gray, rectangular room, built of cement blocks with a concrete floor—had made deep sleep impossible. Still, I was grateful to the people of this small mountain hamlet for welcoming us and providing shelter on a stormy night. Although the rains pounded down for most of the night and wet part of the floor, the dawn broke clear, promising sunshine.

I was so eager to stretch my legs and get moving again, I couldn’t wait for the mules to be loaded with our gear. I just ate a chunk of dry bread for breakfast, put on my backpack, and started trudging up the long, rocky road. It was a steep trail, and after hiking about a mile I was glad to see the mule train coming up behind me—especially when they gave me a mule to ride. He was strong and sure-footed, gliding easily over the rocks and slippery red mud as we traveled ever upward.

We were heading to the park facility—a cluster of small wooden buildings just past the entrance to Humboldt National Park, about five miles away. En route we stopped at a tiny hamlet, looking for an 89-year-old man named Juan, who we’d been told remembers seeing Ivory-billed Woodpeckers in these mountains. Of the five or six dwellings there, only one or two seemed to be occupied. A woman told us that Juan was out in the woods somewhere, so we rode on.

Only ten or fifteen minutes later we ran into him, a lean, sinewy man dressed in tan clothes and a cap, with a long machete strapped to his belt—a basic piece of equipment in these mountains that almost every man has. I rode up beside him as Martjan asked him about Ivory-bills. He moved here from the Baracoa area in the early 1960s and worked as a logger in these mountains, Juan told us. It was here that he first saw Ivory-billed Woodpeckers, which he described perfectly. Interestingly, like old Rafael the other day, he described the bird’s typical call as sounding like a young goat. He remembered very well when Lester Short and the other researchers came here in 1986—and even recalled most of their names. And then he said he has not seen any Ivory-bills since the late 1980s.

The entrance to Humboldt Park was a welcome sight. The small forest station here is called Ojito de Agua, but it’s really just the beginning of the sector of the park that bears that name. The place we’re heading to, Campamento de los Rusos, is about 12 kilometers away, in the heart of Ojito de Agua, and involves a lot more uphill travel on a rough trail. Martjan’s friend Jabao greeted us as we entered the park. He had ridden up from Farallones on the other side of the mountains and plans to camp with us for our entire stay. Two park employees, Manyi and Vladimir, would also help us set up camp and guide us through the area.

We sat relaxing at some tables under a shelter with a thatched roof, and life seemed unbelievably pleasant after our long haul. A young girl brought us tea as well as small cups of the typical Cuban coffee, thick and rich like espresso and very sweet. People offered to cook lunch for us, and it was very tempting just to stay here until tomorrow morning—especially considering the hardships we’d gone through in the past day and the fact that it was already nearly 2 p.m. But instead we pushed on the rest of the way to Campamento de los Rusos, so we can begin our search at dawn tomorrow in the very area where the Ivory-bills were seen in 1986. But this time we didn’t have any mules to ride. They were all carrying camping gear and supplies.

We staggered into camp just before dark. Jabao, Vladimir, and Manyi had already cleared places for our tents and put a tarp over a framework of thin logs they erected to provide a sheltered cooking area—which was a good thing. A storm broke just after we arrived, and we set up our tents in a driving rain. After eating some rice and vegetables—our first meal since the dry bread we ate early this morning—we were all in bed by 7 o’clock.

Follow my daily blog as the search for the Ivory-bill unfolds.