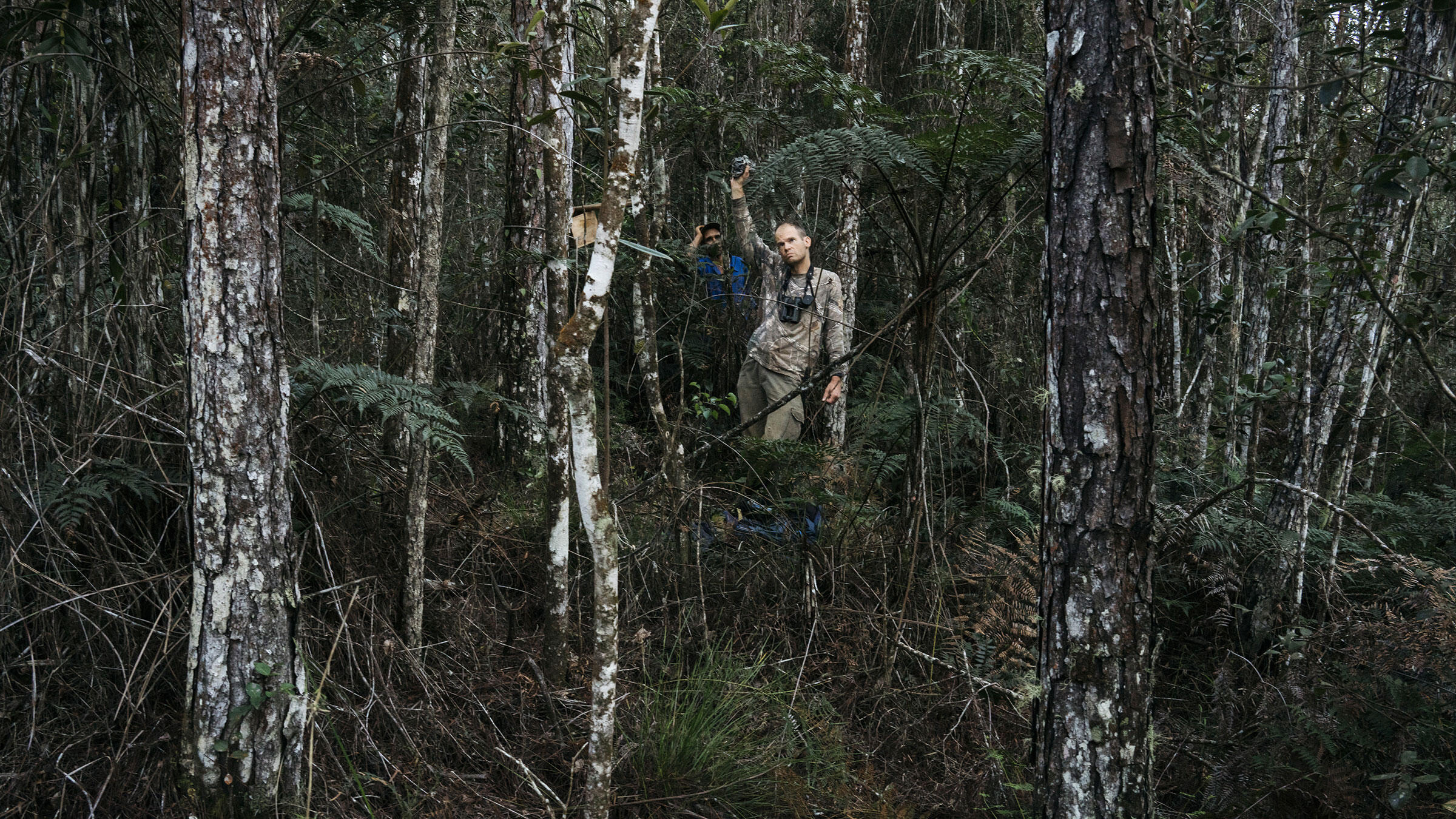 After using the double knocker and feedback call of the Ivory-billed Woodpecker, Martjan Lammertink waits to hear any response in Humbolt National Park. Photo: Greg Kahn

The Ivory-bill becomes more ghost-like each step of the way.

January 31, 2016, Campamento de los Rusos, Humboldt National Park, Cuba — On this quiet Sunday morning, shortly after dawn, we made our way through the pinewoods to the exact spot where Les Short and his colleagues saw Ivory-billed Woodpeckers in 1986. I remember so well reading the reports and articles about those sightings. The whole thing had come about because a Cuban official telephoned Short (who was then chairman of ornithology at the American Museum of Natural History and a recognized expert on woodpeckers) in August 1984, inviting him to help search for Ivory-bills in eastern Cuba, which loggers had reported seeing in the area.

Early the following year, Short took him up on his offer, searching the mountains of Guantanamo Province for a few days in late February and early March with George Reynard, a sound recordist affiliated with the Cornell Lab of Ornithology. And they found Ivory-bill foraging signs—bark stripped away from freshly dead or dying trees. The other woodpeckers in the area, wrote Short, are “all much smaller, weaker-billed woodpeckers . . . incapable of stripping a tree in this way.” Although they didn’t find any of the birds, Short mapped out likely looking areas and urged his Cuban colleagues to keep searching.

On March 16, 1986, Cuban biologists Giraldo Alayón and Alberto Estrada had a fleeting glimpse of a female Ivory-bill at Ojito de Agua and alerted Short. Just a couple of weeks later, Short was on his way back to mountains of eastern Cuba with his wife (Kenyan ornithologist Jennifer Horne), George Reynard, Alayon, and Estrada. Our friend Carlos Peña also took part in the expedition. Short said they drove for “nine bone-jarring hours, the last twenty miles at night through mud and mire, to our quarters—a candle-lit temporary logging camp at Ojito de Agua.” (The area is even less accessible now. The logging roads, which often run straight up and down steep hills, have become deeply rutted ravines, some several feet deep.)

When they arrived at Ojito de Agua, local woodsmen (no doubt including the man called Juan we met yesterday) told them they had seen an Ivory-bill foraging just a day earlier in a nearby valley—the very one where Martjan and I now stood. Jennifer Horne was the first on the expedition to see an Ivory-bill, on April 6. Quoted in a June 16, 1986, New Yorker “Talk of the Town” piece, Short said, “She had the best view of all. She described the bird as ‘a big black-and-white woodpecker with an ivory bill and white wing patches.’ For twenty-five seconds, she watched the bird—a male—stripping bark. This was conclusive evidence that the holes and stripping we had been seeing in the trees were the workings of ivory-bills.”

Short and the others had their own sightings in the days that followed. It looked like “a giant, elongated crow,” said Short in the New Yorker piece, “long-necked, long-tailed—diving down from a tree as though I or someone else had scared it. It went ‘Enk!’ and vanished. . . . I had the impression the birds were scared of us, of the woodsmen, of everything—and why not? They had been driven from one environment after another by men.”

The combined viewing time of all their Ivory-bill sightings was only about 70 seconds, and no one was able to take a picture or record the calls of the birds—but still, it was so hopeful. Short recommended that all logging be halted within a several-mile-wide area of the sightings and that only scientists and wildlife management personnel should be allowed to enter the area. And indeed, before Short had even left Cuba, the Ministry of Agriculture officially shut down logging there. Who could possibly have predicted that the very last accepted sighting of a Cuban Ivory-bill would take place only a year later? 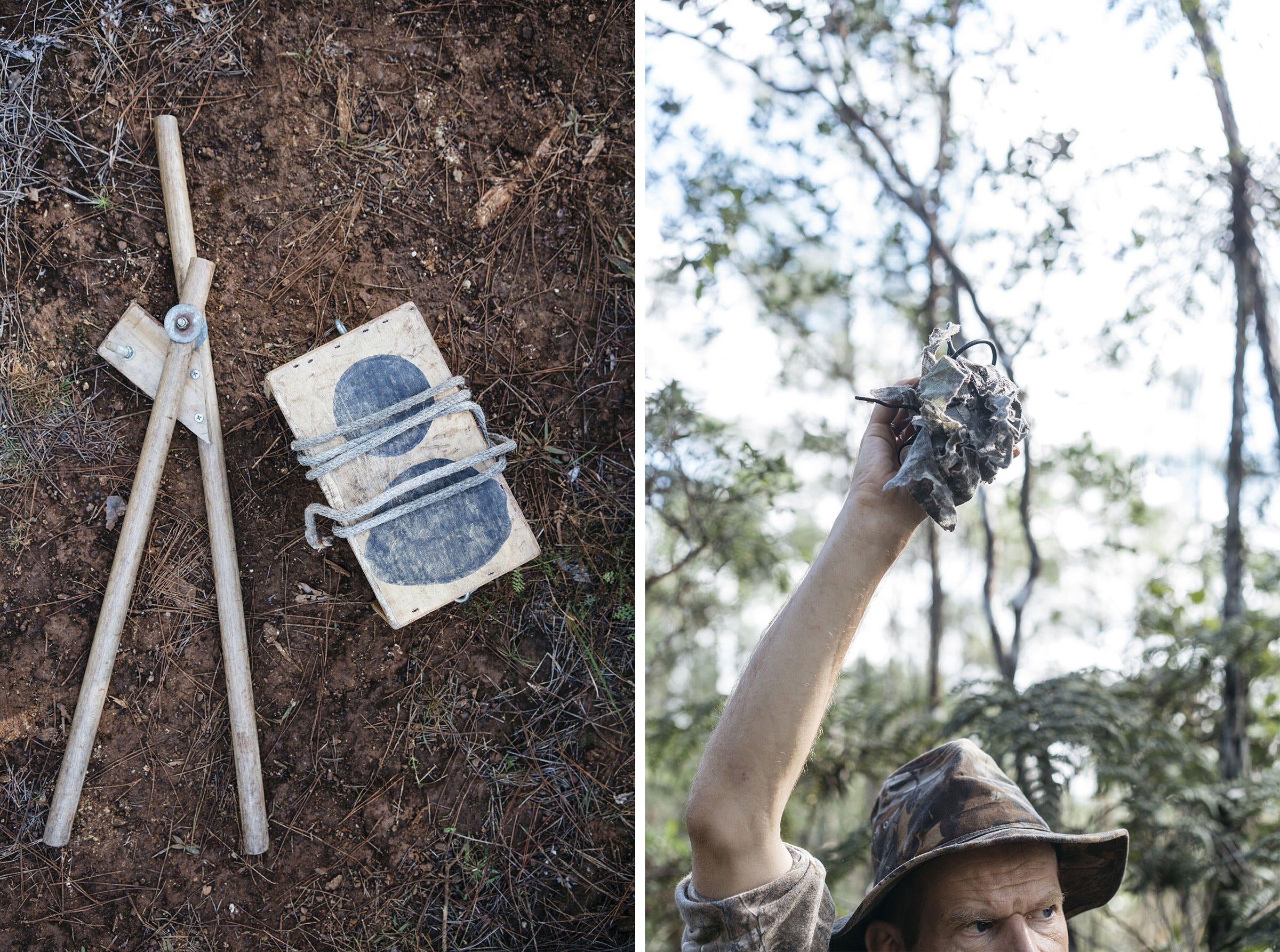 It was an eerie moment as Martjan finished tying the double-knock box to a tree and raised the striker for the first hit. Pausing for an instant to check the time, he hit the top of the box hard: Bam-bam! The sound echoed down the valley. We stood silently, holding our breath as we strained our ears to hear a response. Twenty seconds later, he hit the box again: Bam-bam! And we waited again . . . and again. Then Martjan held up an mp3 player and broadcast the scratchy old 1935 Cornell Ivory-bill recordings—kent-kent-kent-kent. But there was no reply—only the wind whistling softly through the tops of the pines.

I was struck by the solitude of that place, and the intensity of the moment. I had dreamed of being there for 30 years, ever since reports of the Ivory-billed Woodpecker sightings first came out. I so want the birds to still be there. I have read all of the reports and articles and book chapters on the Cuban Ivory-bill dozens of times over the years—written by John Dennis, George Lamb, Lester Short, Martjan Lammertink, Jerome Jackson, and more. And extinction, like a great dark storm cloud, has always loomed above everything. Are we too late? You have to wonder. For me, it was starting to feel like a very long time since they saw the birds here. I already knew that on an intellectual level, but I felt the emptiness more keenly at Ojito de Agua, with a stiff breeze blowing the scent of pine into my face.

Follow my daily blog as the search for the Ivory-bill unfolds.