After a pipeline rupture last week, tens of thousands of gallons of oil leaked in the Pacific. See how it's affecting local habitat.

Unlike most environmental catastrophes, oil spills are abrupt, highly disruptive, and extremely hard to conceal. Last week, a burst pipeline dumped 105,000-gallons into the open near Santa Barbara, California—with at least 21,000 gallons funneling down a storm drain and into the Pacific. The nine-mile slick gradually made its way onshore at Refugio State Beach, and while clean-up crews have managed to vacuum up at least 10,000 gallons of that crude, the eventual environmental cost is still unclear.

So far, 13 birds have been found dead (including gulls, grebes, and a Red-throated Loon), while at least 25 birds, including eight oiled pelicans, have been taken in for treatment. Rescuers have collected 8 dead mammals, and 18 others have been collected for treatment.

As of Monday, May 25, the oil started washing up on Coal Oil Point Reserve, where threatened Western Snowy Plovers are currently nesting. Dr. Cristina Sandoval, the Reserve’s director, has been working with her staff and members of Santa Barbara Audubon to monitor the area and protect the nesting plovers. Beach docents, who normally help educate people about the space plovers need to nest, have been helping rake up the oil and contaminated sand.

“The high tide in the evening brought more oil everywhere including areas that had already been cleaned,” Sandoval wrote on the Coal Oil Point Reserve Facebook page. “It seemed a worthless effort but, if the oil is not cleaned, it will be buried and continue to release toxic chemicals.”

A larger group of volunteers will monitor the beaches and participate in cleanup today. So far, at least three plovers have been observed with oiled feathers, while others appear to have oil on their beaks. 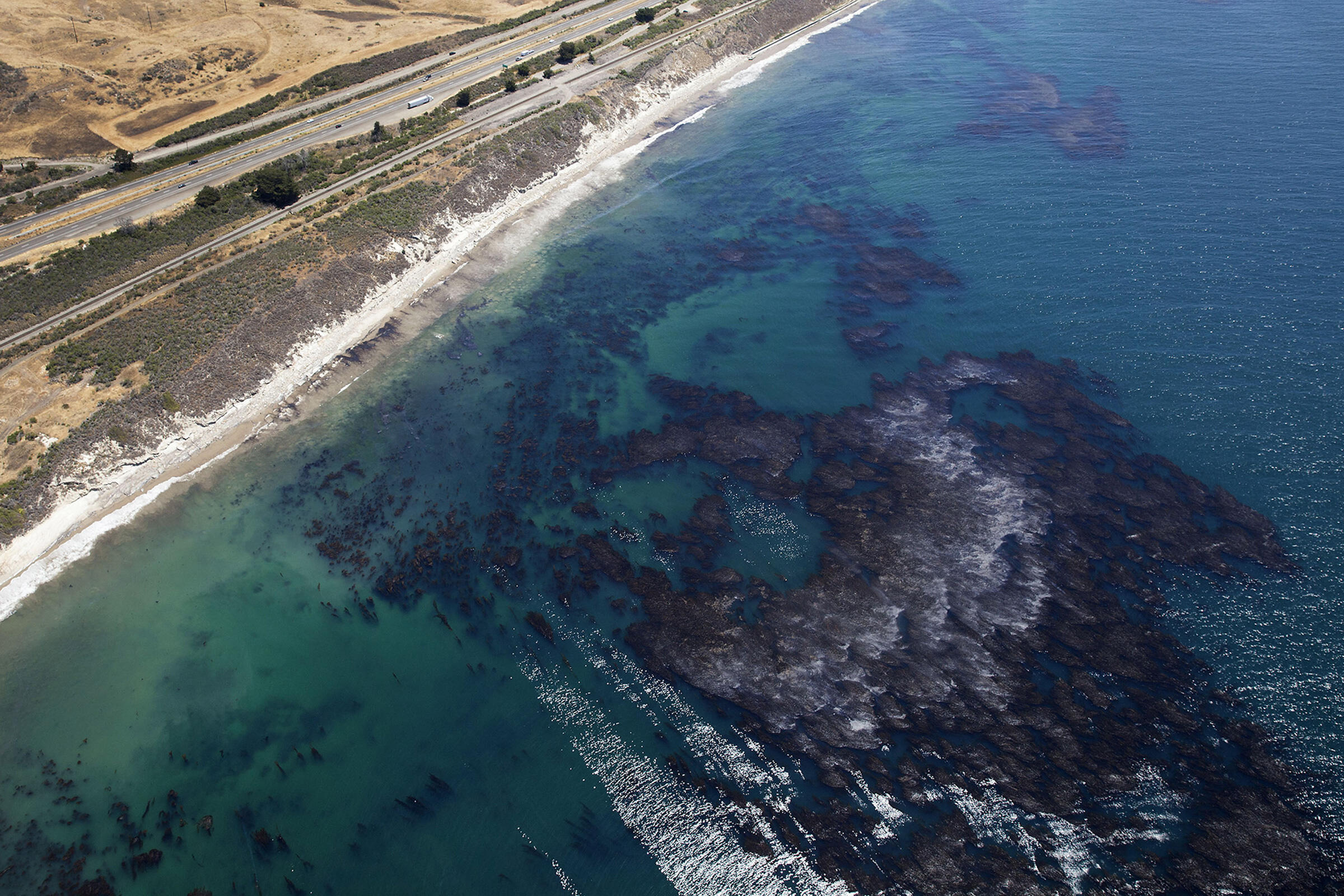 Oil off Santa Barbara, evoking the disastrous spill of 1969. When the pipeline that caused this mess was installed in 1987, it was hailed as safer than the alternative: single-hulled oil barges with a nasty habit of springing leaks. Photo: Brian van der Brug/LA Times/Getty 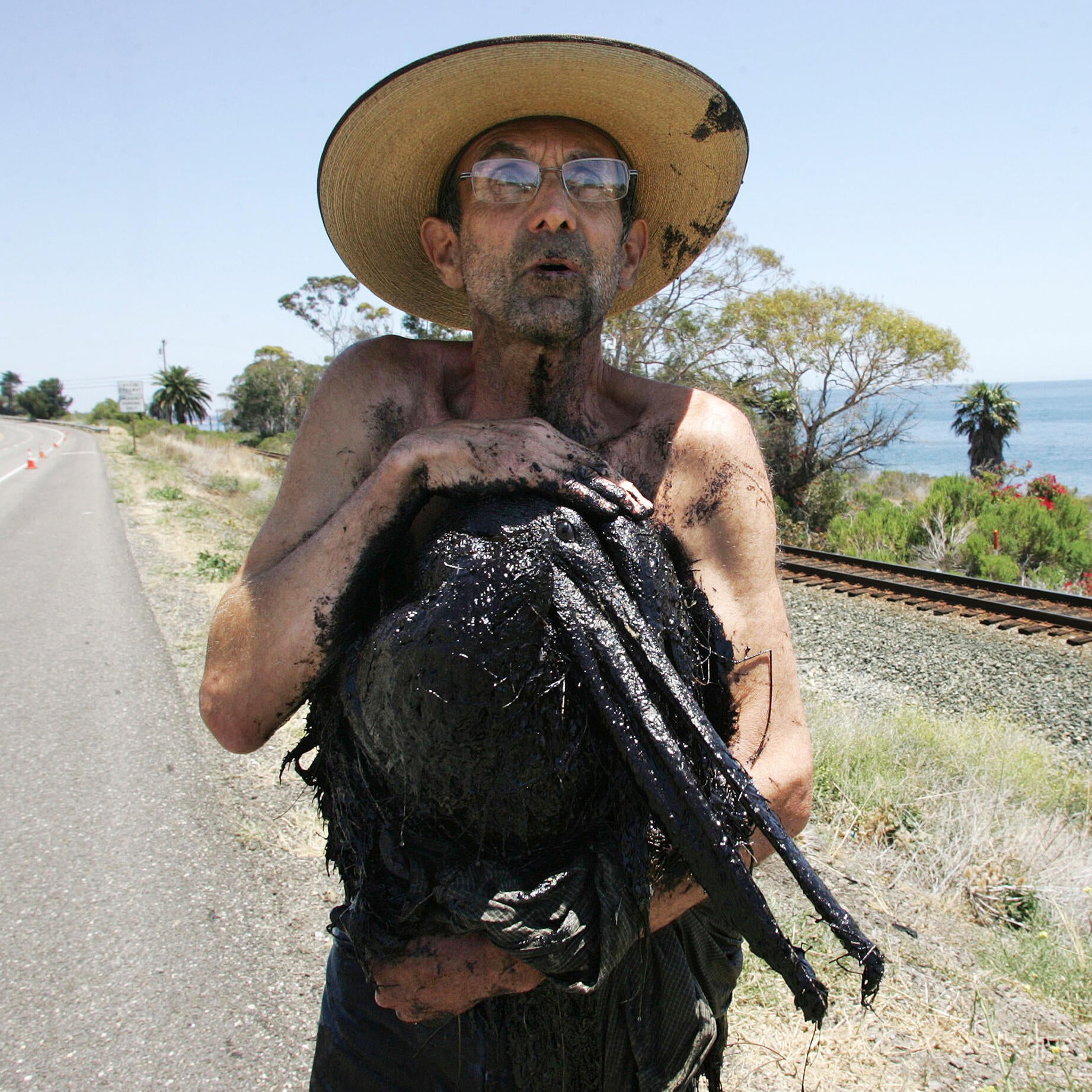 Reeve Woolpert carries an oil-covered Brown Pelican from Refugio State Beach. If you see an oiled or injured bird, please call 877-823-6926 to ensure it gets proper assistance. Only trained professionals should handle hurt wildlife. Photo: courtesy of Ventura County Star 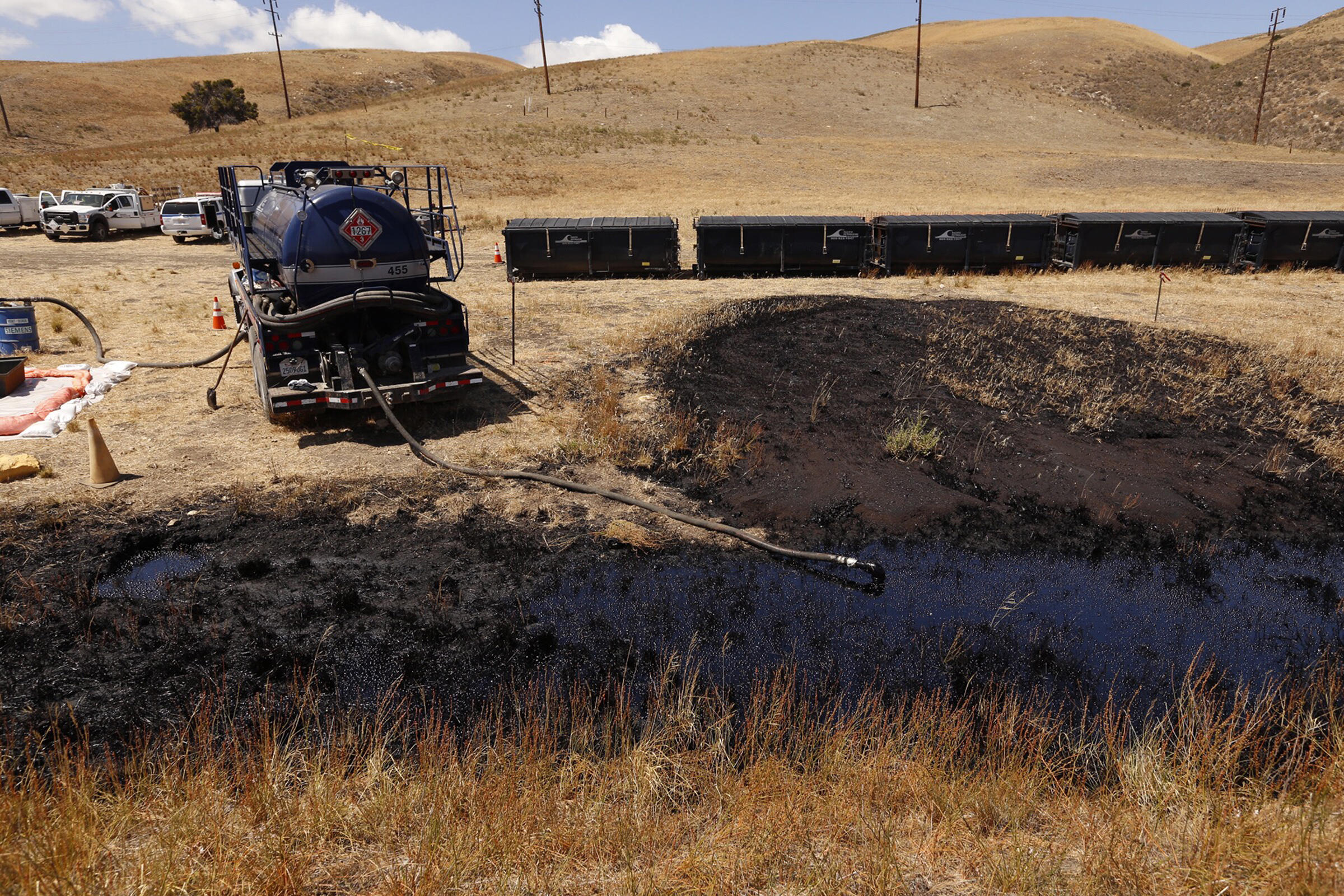 The point of origin where the pipeline ruptured, spewing at least 21,000 gallons of crude oil into the open ocean, via an underground storm drain pipe. Photo: © 2015 Al Seib/Los Angeles Times. Used with Permission. 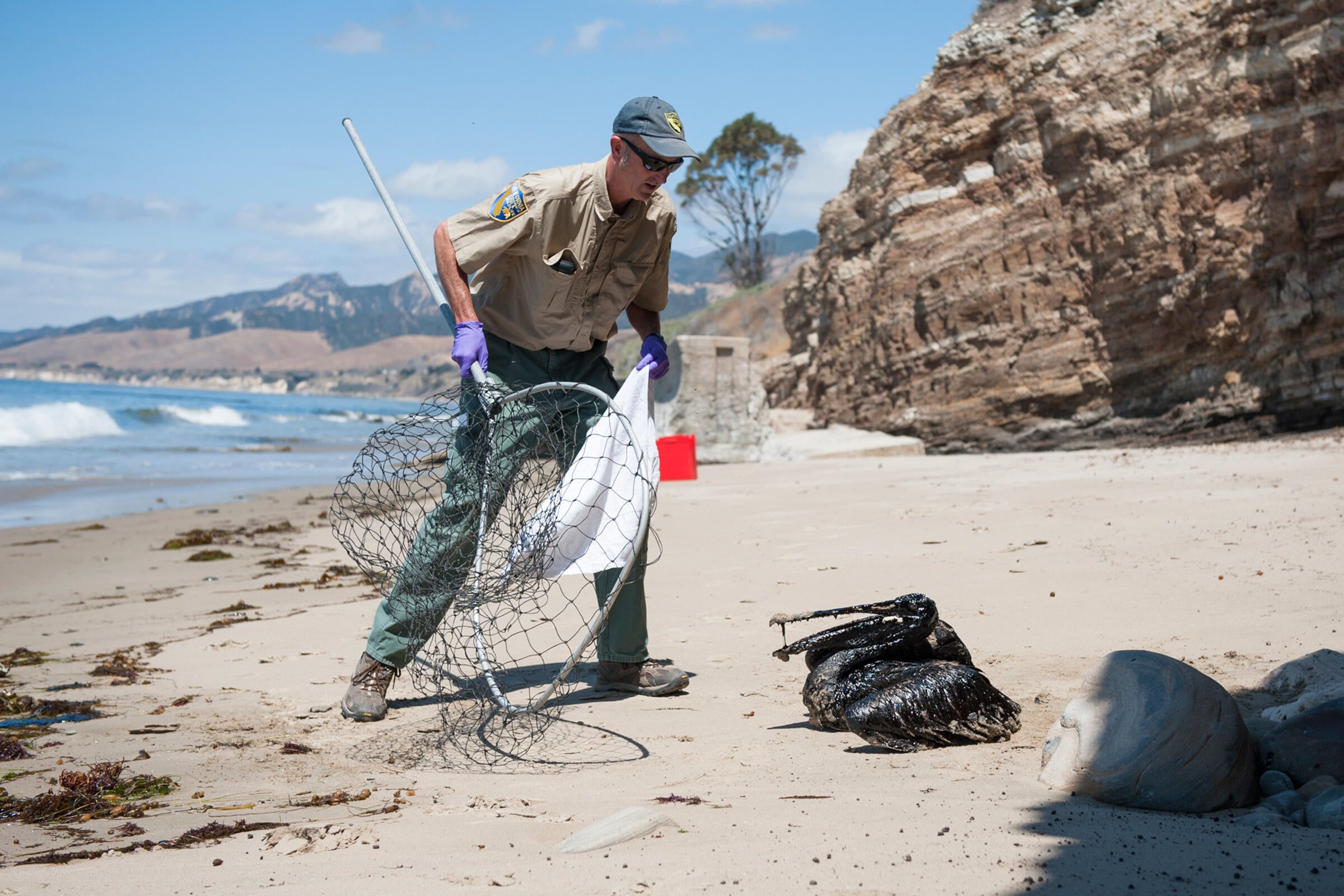 Mike Harris, of the California Department of Fish and Wildlife, expertly nets an oil-coated Brown Pelican, one of dozens of birds rescued. It can take up to 300 gallons of water to clean a single pelican, and most birds require a week to recover. Photo: Kenneth Song/Santa Barbara News-Press/ZUMA Wire 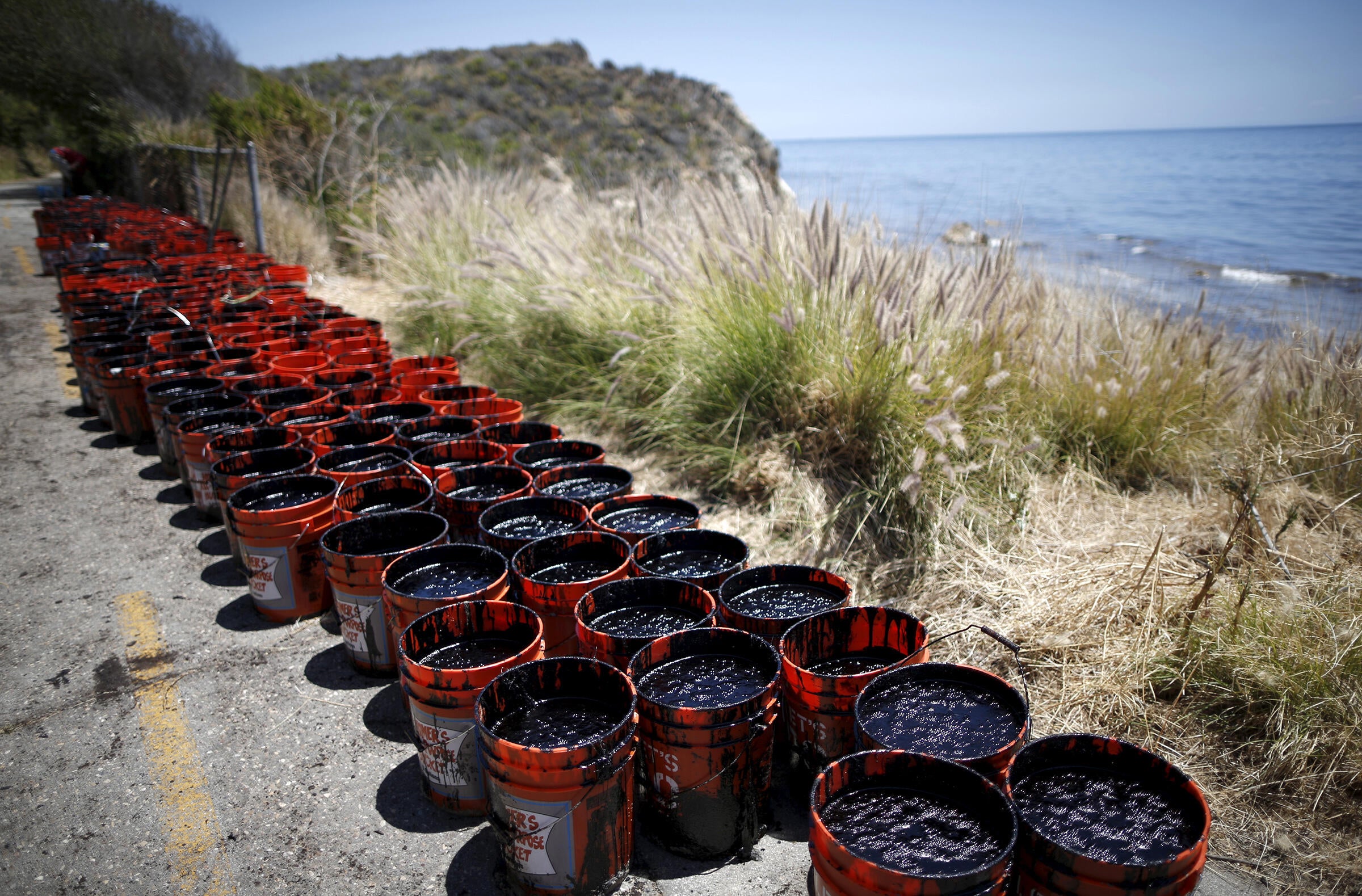 Before official cleanup crews descended on petroleum-soaked beaches, local residents scooped up thousands of gallons of crude along the coast of Refugio State Beach in Goleta, California. Photo: Lucy Nicholson/Reuters 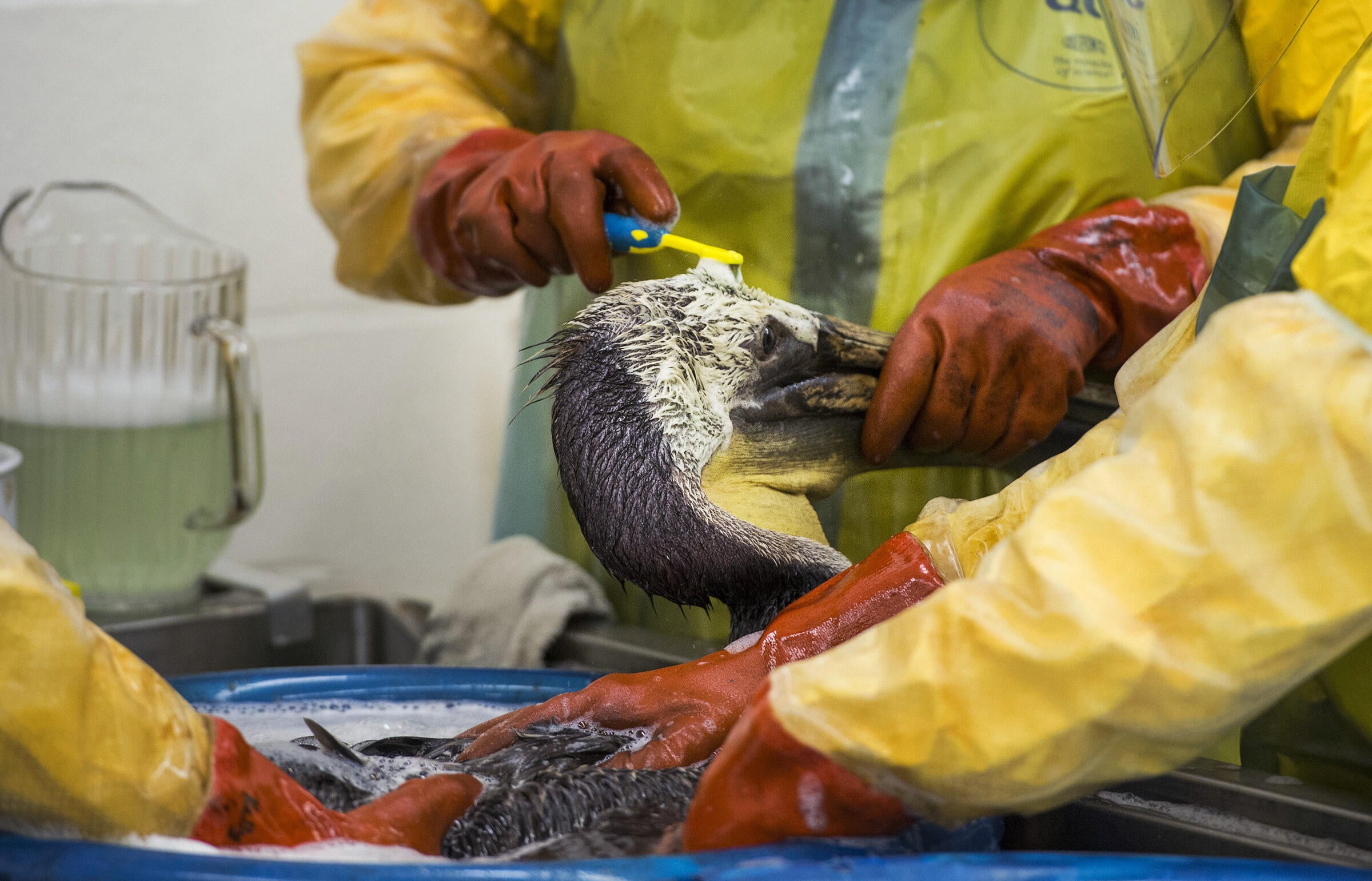 For many, the current situation has brought up memories of the 1969 oil spill in Santa Barbara, which was North America’s first major oil spill (it has since been surpassed by the 1989 Exxon Valdez crash and then the 2010 Deepwater Horizon explosion). The ‘69 fiasco was caused by a blowout on Union Oil’s “Platform A” and resulted in up to 4.2 million gallons of spilled crude that formed a 35-mile wide slick. It took 10 days to plug the Union Oil leak, which killed some 3,500 birds, as well as dolphins, fish, elephant seals, and sea lions.

“We tried to treat [the birds] but we didn’t know what we were doing,” Get Oil Out (GOO) founder Bud Bottoms told ClimateProgress last year. “This was the first time this had ever happened. And they all died.”

That first spill shocked people—environmentalists and politicians alike. The resulting outrage helped spur the creation of the Environmental Protection Agency, as well as the passing of the Clean Water Act and Endangered Species Act.

The LA Times also reported this week that the owner of the busted oil pipe, Plains Pipeline, has a deeply flawed safety record, with some 175 safety and maintenance violations. Last Thursday Audubon California called for a full investigation into the cause of the leak—which was detected by a private citizen, not by a built-in safety protocol. 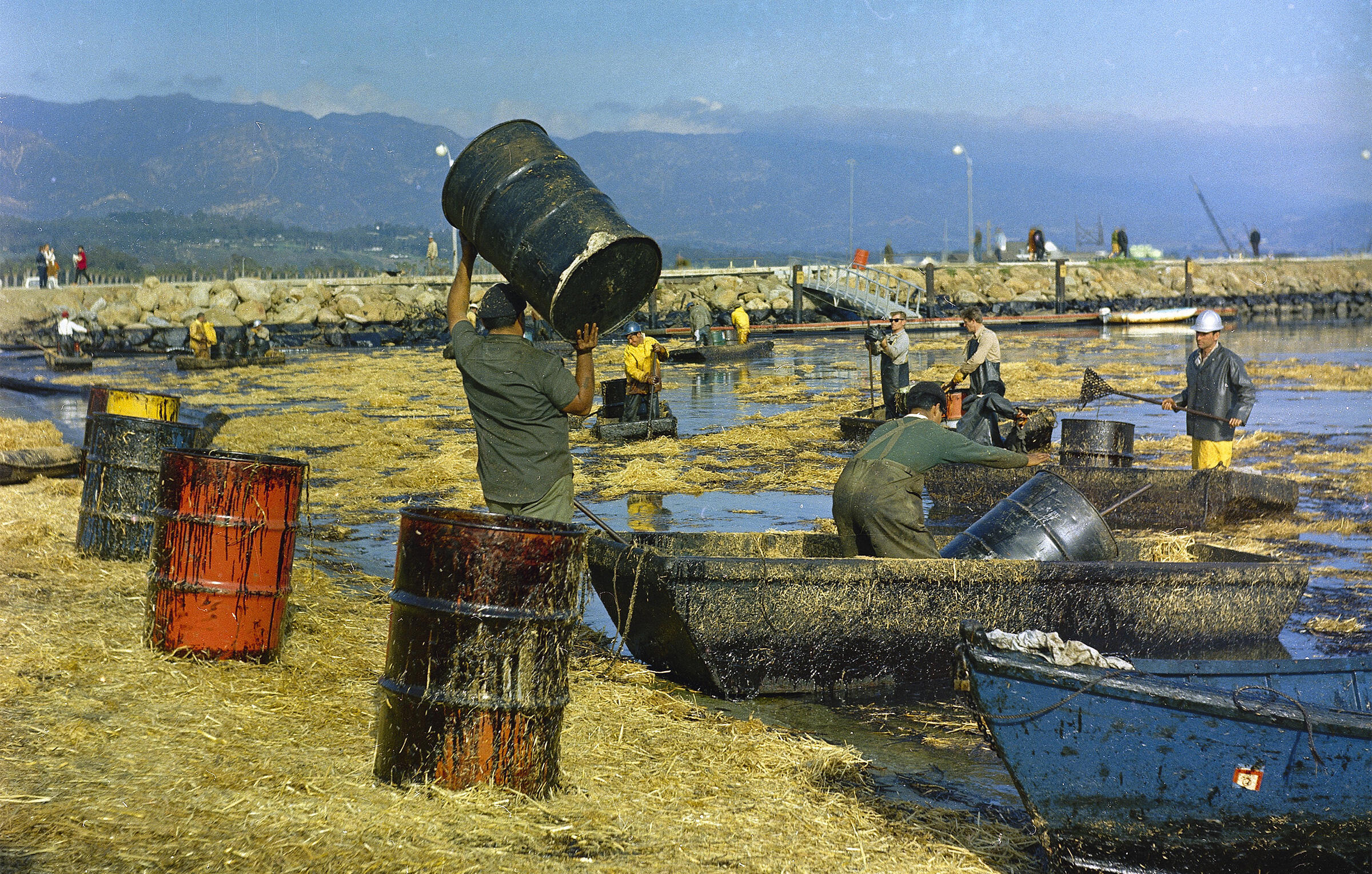 A 1969 explosion leaked millions of gallons of oil into the sea. Straw placed to absorb oil is shoveled and racked off the beach at Santa Barbara Harbor. Photo: AP Photo 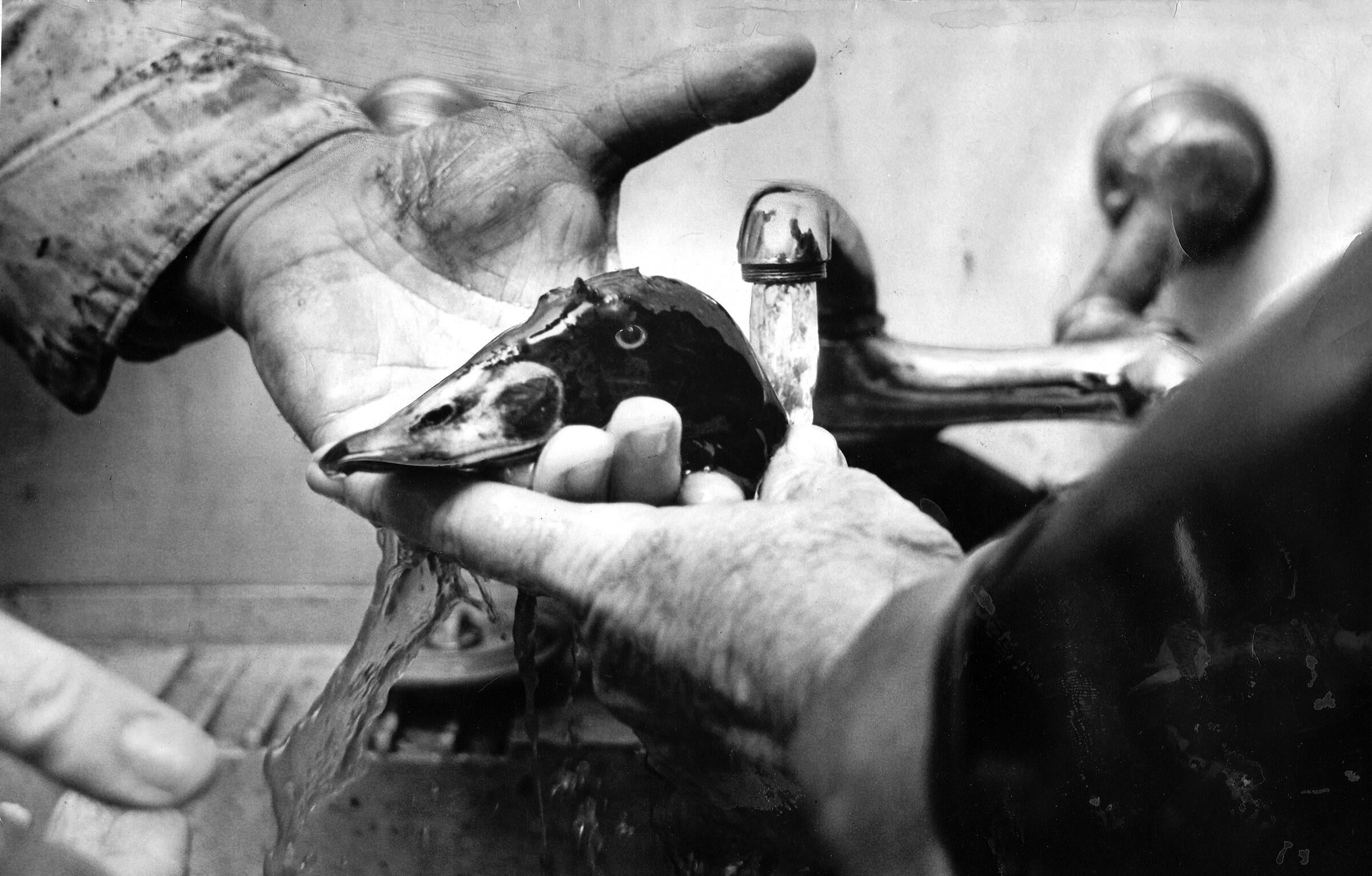 An oil-soaked Surf Scoter gets a washing after the 1969 spill. The spill was the largest to date in the U.S., and many modern cleanup methods were still unknown. Photo: © 2015 Los Angeles Times. Used with Permission.