Do Fireworks Cause Bird Deaths? What to Do on the Fourth of July 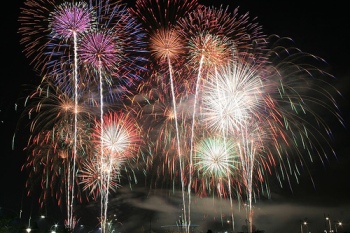 I have fond memories of watching fireworks on the Fourth of July with my family. We’d gather on the shore of Lake Placid in Seguin, Texas, listening to the cicadas buzz until they were drowned out by fireworks whistling into the air and exploding with a loud pop as they sparkled in a showy display. Until last year, I had no idea the explosives could also be dangerous to birds: fireworks set off in December caused about 5,000 bird deaths in Beebe, Arkansas. So it got me wondering: Are birds in danger on Independence Day?

Fireworks and loud noises have been used to scare off unwanted birds (without killing them) for decades. The problem in Beebe, Arkansas was timing. Kevin McGowan from the Cornell Lab of Ornithology points out that the red-winged blackbirds were grouped together in one location, typical behavior for the winter season. When the fireworks went off during the evening, it startled some of the birds, which startled more and so on.

“It’s like someone panicking in a movie theater,” McGowan says.

Hampered by poor night vision, the birds bumped into houses, trees and other objects.

Besides timing, location is another factor. Dutch scientists used operational weather radar to track bird disturbances in grassland and wetland areas during fireworks displays. They found that birds in those areas had a tendency to take flight en masse during displays—a non-fatal move in open areas, but more deadly in urban locations.

As for Independence Day: “It’s a question of bird behavior and distribution,” says McGowan. During the summer months, birds are usually more spread out, which means fewer bird casualties. “You’re going to scare a few robins here and there, but that’s not going to affect a large number of birds.”

McGown stresses that whether fireworks pose a risk to birds depends vastly on location. Nesting terns and gulls have been known to be disturbed by fireworks along the coast, often abandoning their nests and exposing their eggs to predators. In fact, the Gualala Fourth of July fireworks display in California was cancelled in 2008 due to studies that showed that seabirds abandoned their nests after fireworks.

If you want to see your fireworks and protect birds, too, the best thing to do is attend a commercial display, rather than setting off your own pyrotechnic devices. Commercial fireworks are concentrated in one location, rather than in several locations at once, which is what often happens in neighborhoods. This allows birds to take off and land again in a “safer” location rather than continuing to flee noises coming at them from all directions. In addition, professional displays often take into account the natural environment and any impacts they might have.