Audubon advocates for cleaner energy solutions to reduce our reliance on fossil fuels, fight the impacts of climate change, and protect birds and their habitats. 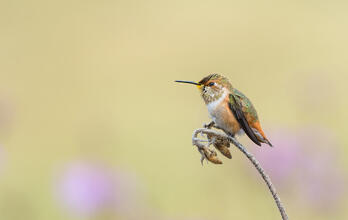 When you have heard the cry of a Common Loon covered in oil as it is plucked from oily waters, it is something you will never forget.  This is what I experienced in 2003 while directing Mass Audubon’s Coastal Waterbird Program and the Bouchard tanker hit rocks in Buzzards Bay, releasing 90,000 gallons of oil that fouled the waters, killed sea birds and oiled the bellies of Piping Plovers just as they arrived to breed on Mass Audubon’s Allens Pond Sanctuary.

Fast forward to California, and time and again, the news erupts with yet another oil spill.  There are the spills from ships, as we witnessed most recently in 2007 when the Cosco Busan tanker hit a bridge and sent 53,000 gallons of fuel spilling into San Francisco Bay, killing a documented 6,800 birds (and presumably so many more sick and undocumented dead birds), as well impacting many fish and marine mammals.  The damage assessment from that spill alone resulted in a settlement of $44.4 million dollars, with more than $30 million directed to restore impacted natural resources and compensate for loss of recreation.

Despite many failed attempts to ban offshore oil drilling, in 2015, 148,000 gallons spilled into Refugio, Santa Barbara from a corroded pipeline.  Then this week, at least 25,000 gallons leaked from a ruptured pipeline onto Huntington Beach (the same site of a massive 1990 oil tanker 417,000 gallon oil spill).  The first oiled and dead seabirds and ducks are being collected now with hopeful rehabilitation of some, and there is still yet unseen long-term damage to sensitive coastal resources.  It is the time of year that ducks are migrating along our coastline, shorebirds that breed in Alaska are here on California’s beaches to spend the winter, and federally threatened snowy plovers roost in large flocks in Orange County’s beaches (almost 10 percent of the population winters here).  These birds are picking food out of oiled seaweed and running through oil globs, leaving their bellies and feet stained.  We do not yet know how birds are doing in the wetlands where birds such as the endangered Ridgway’s Rail are hidden from sight in the marshes.  Endangered Least Terns that were breeding on these beaches have just flown south to Central America’s marine waters for the winter, and are planning to return in the spring, and they deserve clean beaches and fresh fish.  While the numbers of recovered birds are low so far, that number is likely to rise and the damage to the coastal ecosystem, from the insects in the wrackline to the pelicans plunging into the ocean, will take a long time to quantify and even longer to recover.

The impacts of offshore oil drilling are devasting to wildlife, both short and long term, and to the communities and visitors that live, recreate, or create a living working along California’s beautiful and dynamic coastline.  It is time to change our policies for good and stop drilling our oceans and putting the coast at risk. California State Senator Dave Min this week called for a ban on all federal offshore oil drilling, including all existing leases for extraction and exploration.  Audubon California looks forward to working with Min’s office and other state legislators to ensure a safer and cleaner future for California’s coastline.