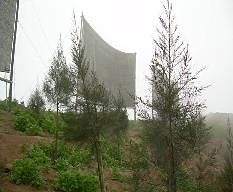 In the community of Bellavista, outside of Lima, there’s a lot of fog, but very little water. The shantytown relies on trucked-in water for everything from bathing to cooking to irrigation. When deliveries run late—which apparently is quite often—residents are stuck without the precious resource. Or they were, until biologists from the German NGO Alimon e.v. figured out how to capture water from the fog that’s abundant except during the summer. (photo: Alimon)

Reuters reports on how the three-year-old scheme works:

Using nets similar to those used in volleyball, residents condense fog, drip-by-drip, into drainage pipes running down the hill into tanks that store hundreds of liters of water for irrigation, bathing and cooking.

"Pure water from fog, can you believe it?" Noe Neira, Bellavista's community leader said, as he dipped his hand into a brick tank filled to the rim. "There was so much water in the air and we didn't know how take advantage of it."

While additional nets could supply water to more shantytowns, currently there’s no plan to expand the project, Reuters reports. In Lima, residents have tap water, which costs about one-tenth as much as trucked water.

Communities the world over suffer from drinking water shortages. Some 1.2 billion people—nearly one-fifth of the global population—live in areas of scarce supply, the UN estimates.

The need for more drinking water is driving innovation. Architects at the Polish firm H3AR have dreamed up a couple of buildings worth a closer look, though they’re still in blueprint form. 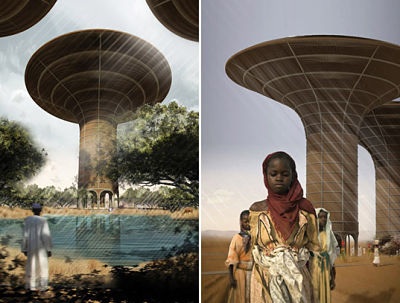 Conflict-plagued Darfur has been ravaged by drought, but in 2007 scientists discovered that a massive underwater lake lies beneath the region. That’s where the Watertower comes in. H3AR’s skyscraper would pull water from the aquifer, and in addition to storing water, serve other purposes: hospital, school, food storage center, Inhabitat reports. Pumps would remove water from the aquifer, propel through the building to heat/cool it, and store the blue gold in the structure’s core. Any wastewater would be recycled on site.

Here’s an idea for taking water collection to a whole new level. Architectural students at H3AR have also entered a proposed rainwater-collecting skyscraper in the 2010 eVolo Skyscraper Competition, GreenDiary.com reports. 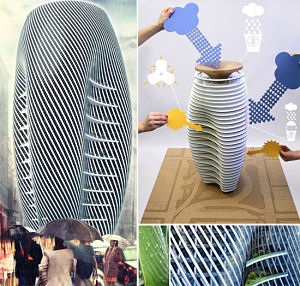 Dubbed the “Capture the Rain,” the skyscraper received a special mention at the competition and harvests rainwater to meet with the daily water needs of its residents. The structure has an innovative roof to capture the maximum amount of rainwater. Water reservoirs located just below the roof’s surface in the form of a large funnel and reed fields serve as a hydro botanic water treatment unit, which processes water into usable water that is further transmitted to apartments.